– Wicked Witch of the West

Be the best of the worst witches, living near the village of Wickersby. Where, along with the other five pretenders for the title, you will fulfill yourself by using villagers and pulling the rug from under the other competitors’ feet in the race for it.

Fireside Games released a game called The Village Crone by Anne-Marie De Witt in 2015. Graphic design was done by the author, Justin De Witt and Alex Fernandez. The game is available on the publisher’s website where, beside updated FAQ and videos on how to play the game, you will find models for 3D printing. Which is a really cool thing when we have more and more access to 3D printers, and thanks to that we can upgrade our game copy. The Village Crone, to a certain extent is language dependent, and unfortunately there is no Polish version. 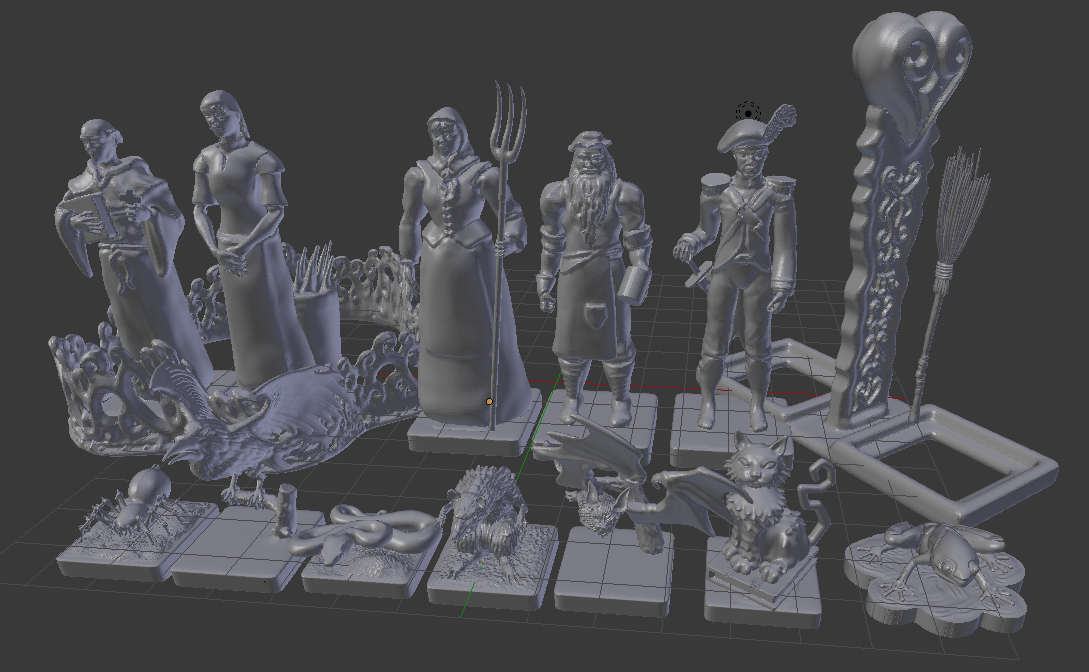 Sturdy, slightly smaller than the standard game box, is packed with six large tiles of modular board and six player curtains that serve as Books of Spells. Next, we have small deck of resources and a bigger deck of Witch’s Schemes. Finally, a stack of tokens containing Familiars, Frogs, Villagers, Binding Rings, Love infatuation, and Broom Stick as the first player marker. Everything fits in a pretty good cardboard insert. The quality of the components is high, the cards are quite stiff and the tokens are coated, and thanks to that resistant to attrition. A slight shortcoming for me were the cuts on the Love tokens. When I put them on Villagers, they turned out to be too loose and standees were slipping out of them. The solution for this was a thin layer of vikol glue on the edge of the cuts. Graphics are consistent and well-suited to the game setting. Occasionally some of the Villagers were mistaken with each other by a few players, due to the similar color scheme of the illustrations. 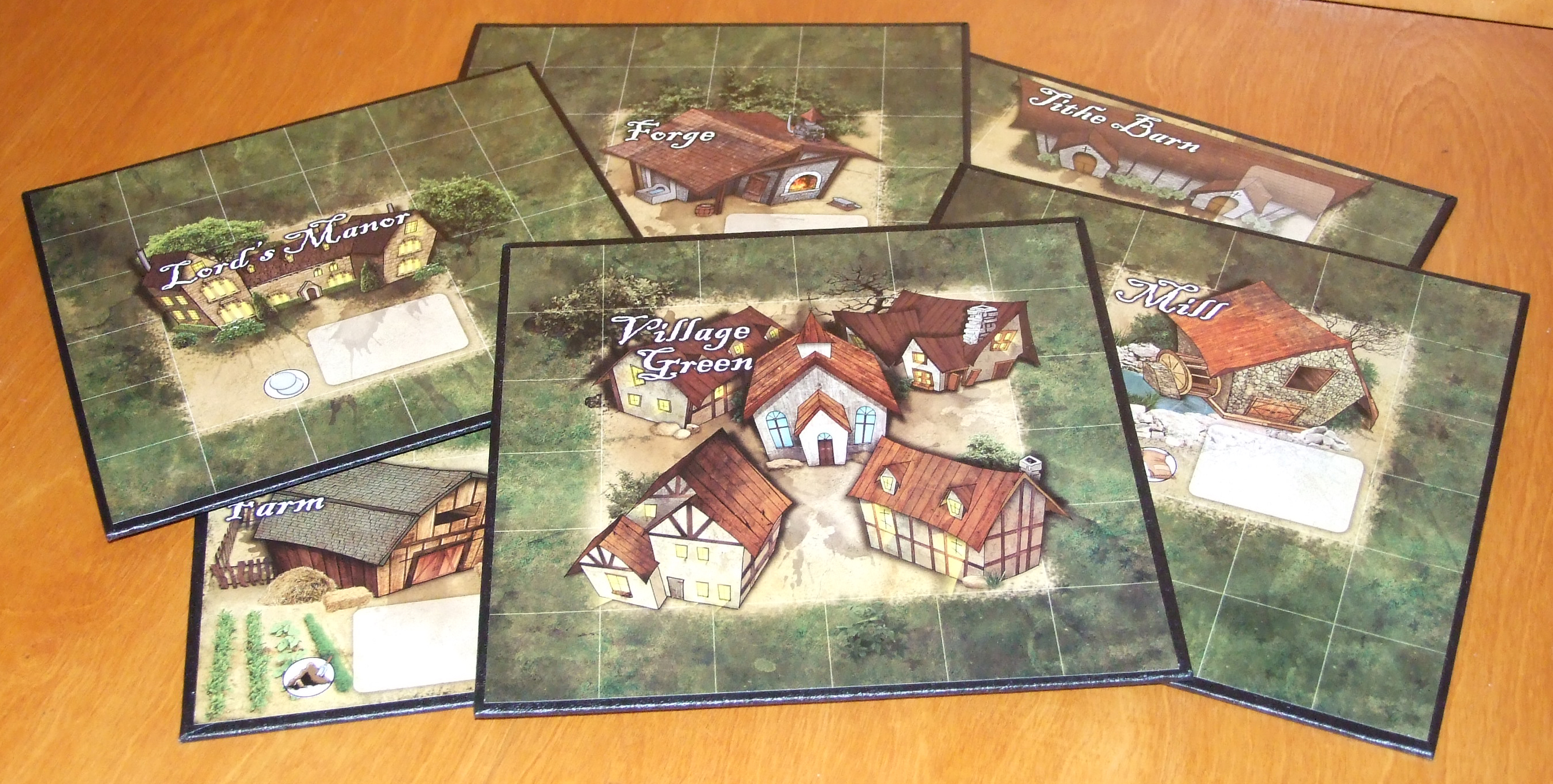 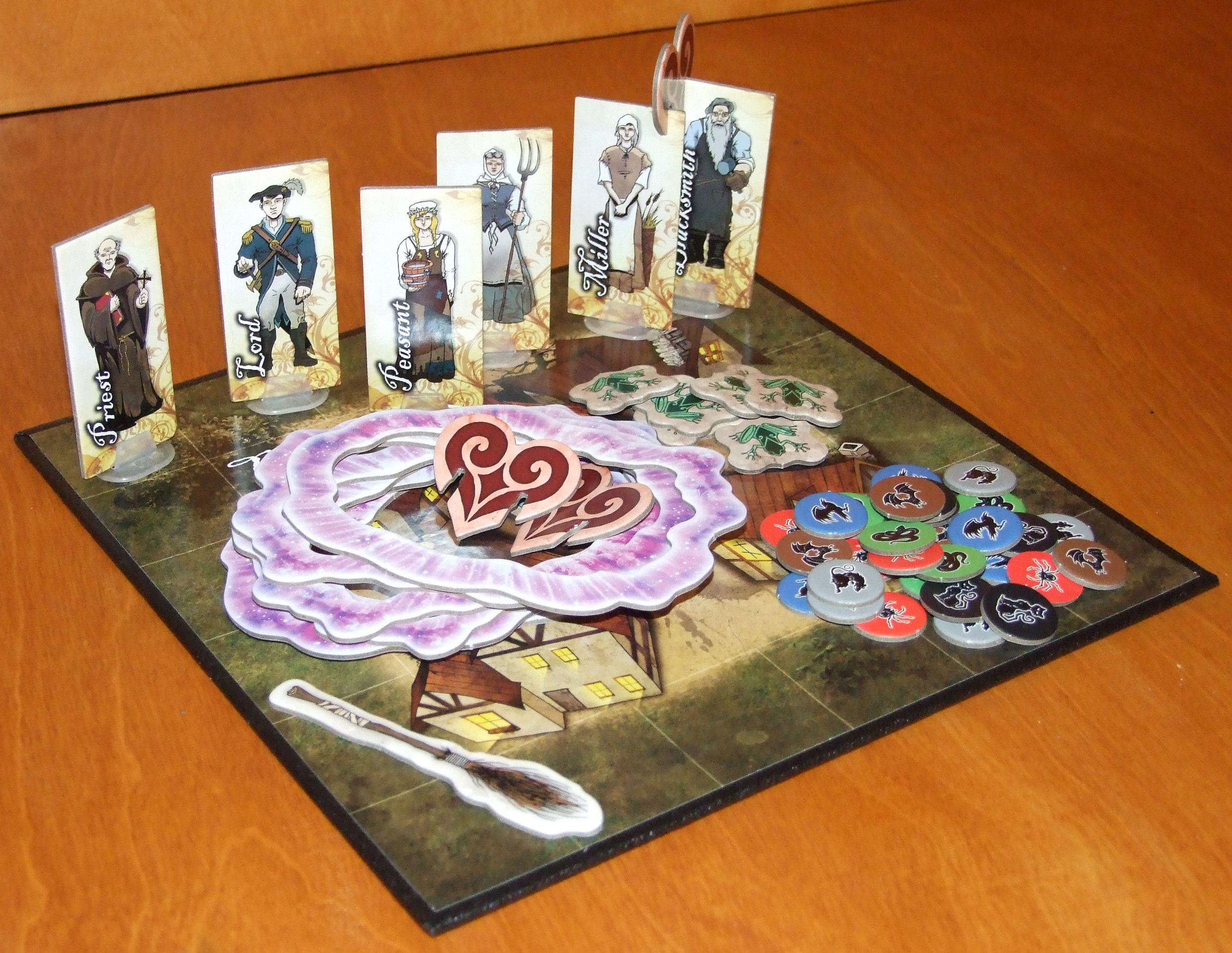 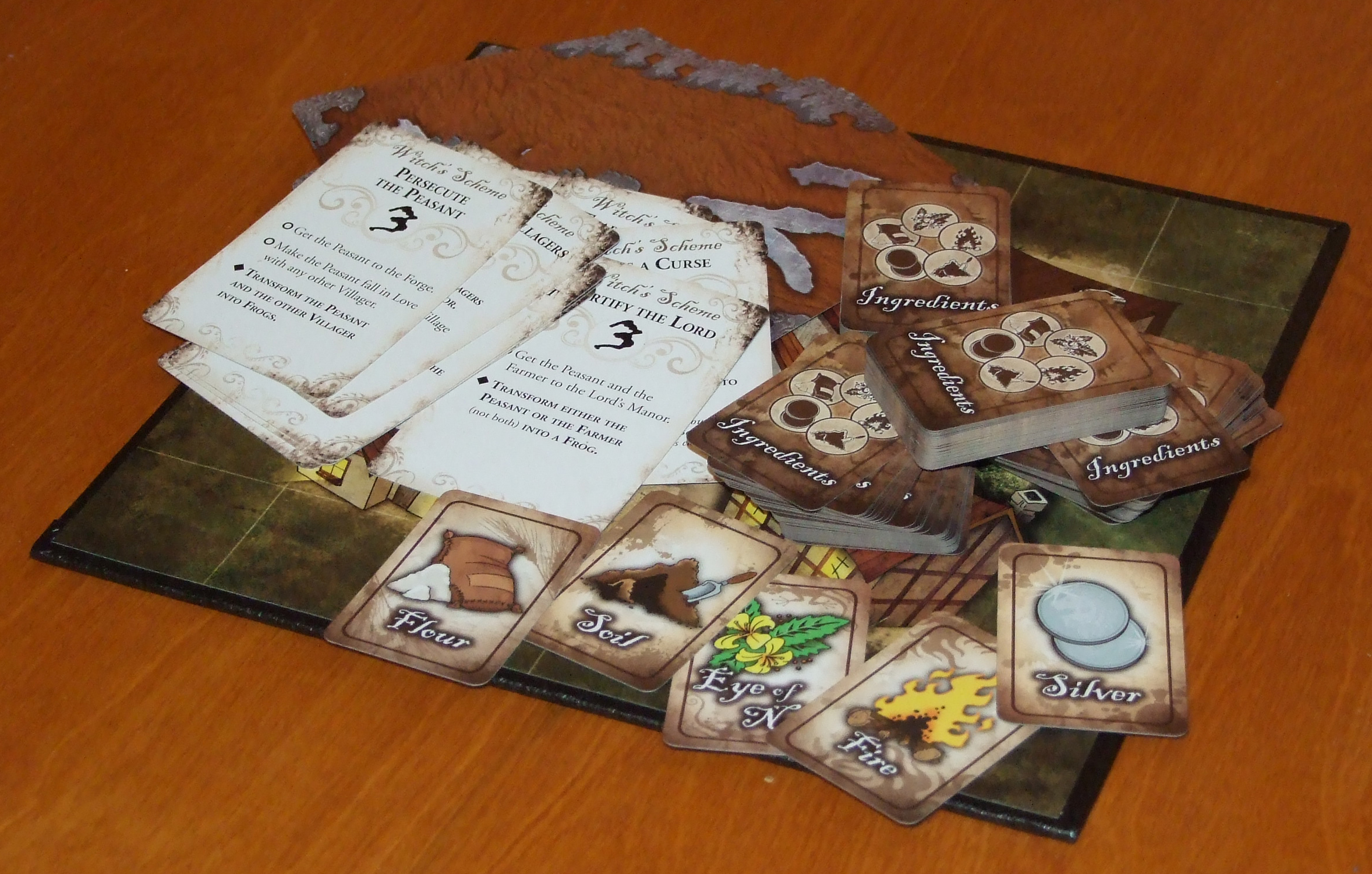 So what’s the story here? Well, we play as a wandering group of witches, who during their merry trip across the world come to Wickersby, a village without a Crone. This opportunity invites them to have a little tournament of influence. In which the best and the fastest one to subdue the will of Villagers to fulfill her Schemes, will win the privilege of “taking care” of Wickersby. In reality, we have here a euro game, in which the player who earns a minimum of 13 points for completed tasks from cards of Witch’s Schemes, wins. During the game we will move the markers of the Villagers and Familiars on board locations, gathering resources, like in the classic worker placement games, managing the collected resources, we will cast specific spells, which will be needed to complete the Scheme cards. What’s a novelty to this classic idea is the fact that 6 “workers” are villagers and each witch can manage them. When we spend resources and we enchant, we can accidentally help to fill in part of another witch’s Schemes. When casting spells in our turn, the other contenders can bother us by interfering with our spell, knocking the spells with our spells, or simply nitpicking at our words. This is the greatest strength of this game and is a breath of fresh air in the usually drier themed games of the worker placement. 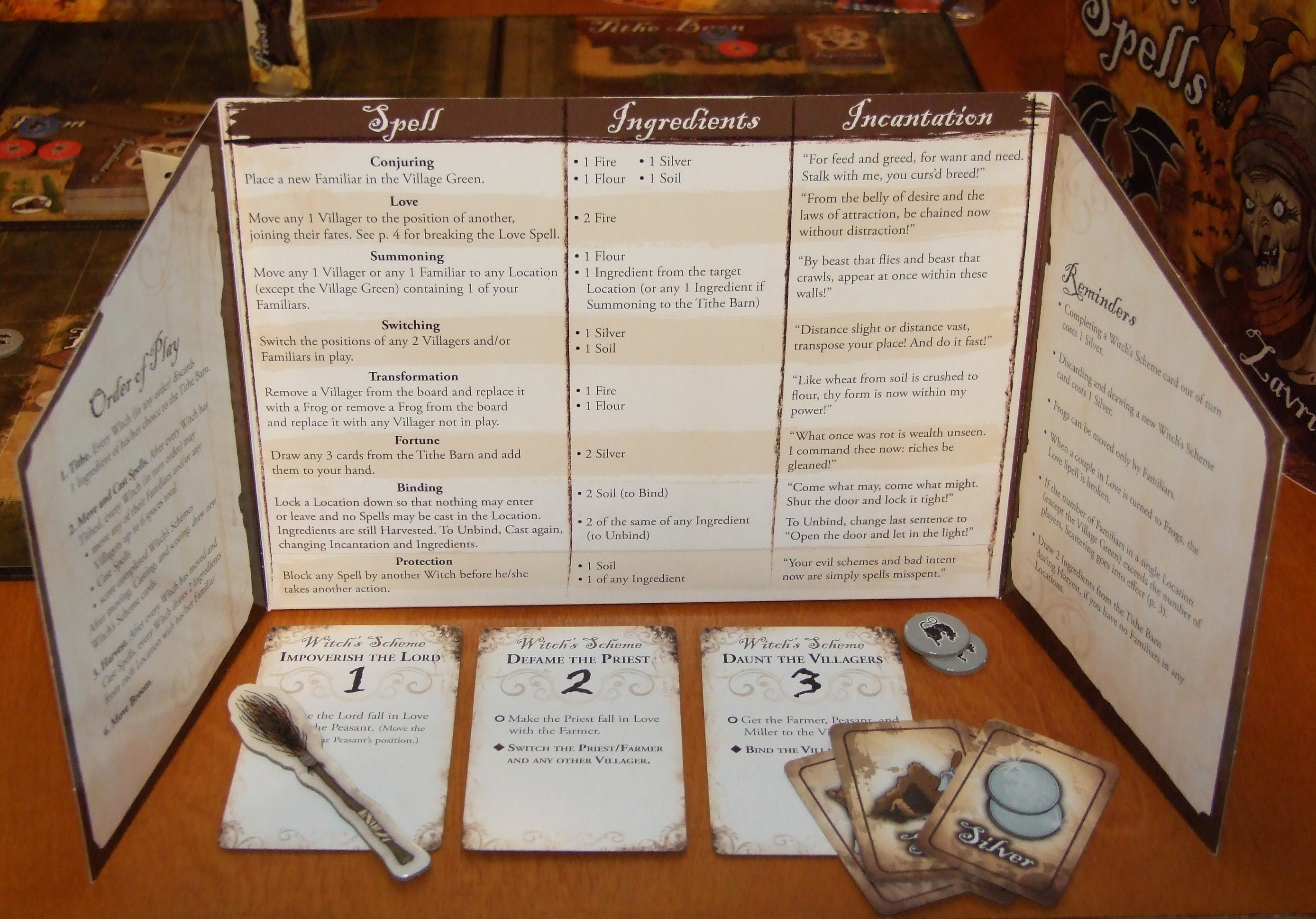 Turn after turn, players will interact with each other, trying to influence as much as they could what happens on the board. All of this takes place in a truly captivating theme. I mentioned that casting spells goes with rhymed sentences. Player screens apart from name, description and ingredients also have got a magical formula. If any other witch points out that we made a mistake – the spell will not work and the ingredients will be lost. Of course, if players don’t want to, they can play without this part of the game. But it will remove a big chunk of fun and theme from it. Immersion in this mechanic is great, while playing with my friends I almost instantly started screeching spells, slouching behind my Spell Book. My significant other reflexively supplemented each incantation by waving a pen like a wand. She also pointed out that she won’t play a next game until I get her a classic witch hat. With the sounds of the forest and the countryside, from the ambient-mixer in background and the music of the medieval inns, everyone was having a great time. Sometimes a local lord and a blacksmith will discover  forbidden love between them. Sometimes it may happen that the village will drown in frogs that once were villagers. And sometimes it turns out that our familiars, while carelessly collecting resources, will bring out the owner of the building, who will disperse our mob of small animals. 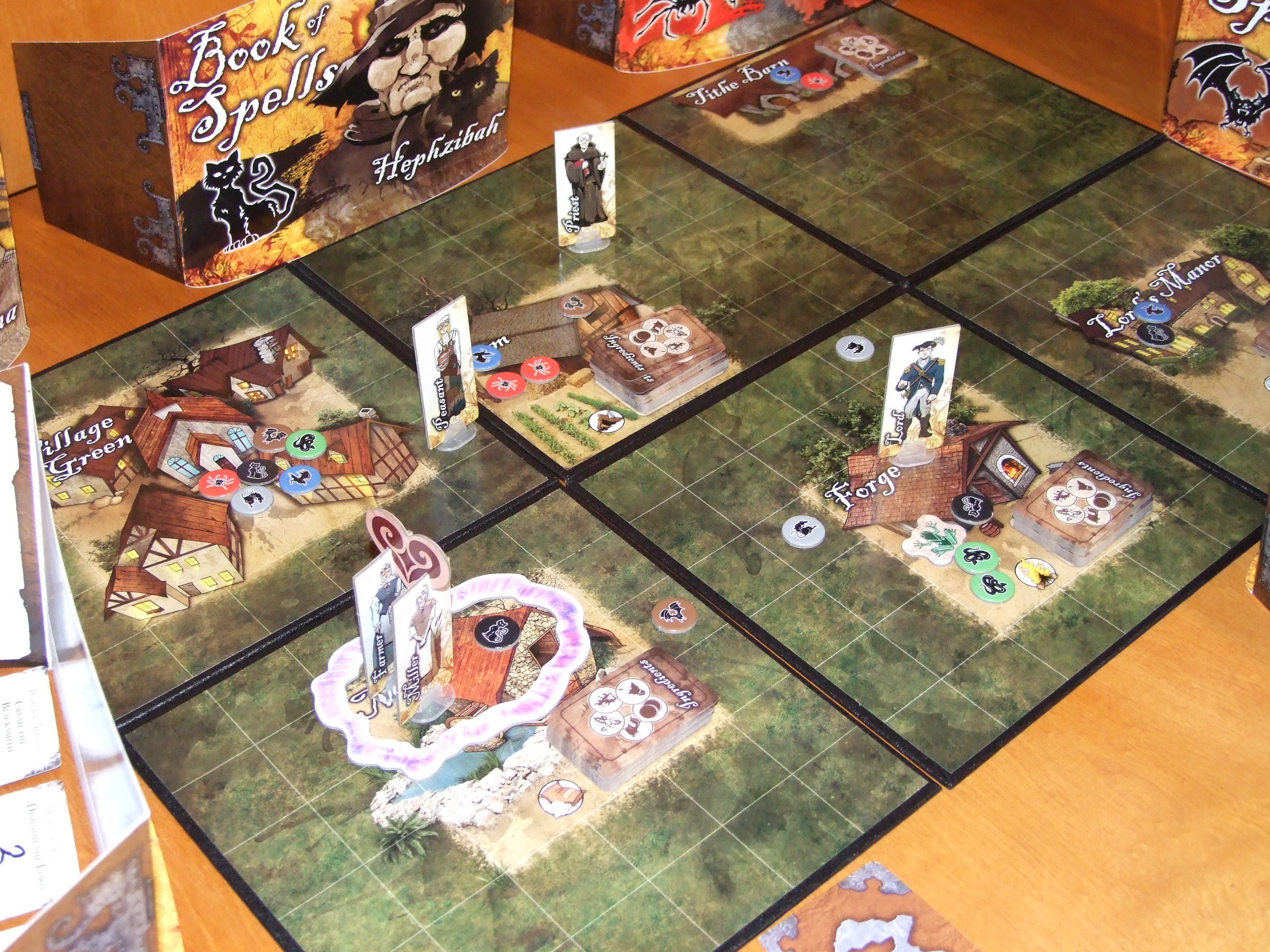 This game will work best for teams, who like to feel the atmosphere of the game and do not avoid negative interaction. It can be played by 1 to 6 players. In my opinion, it is best to play in four, easier to plan some strategy, and with more observation and control to interrupt others’ turn. One game can last from thirty minutes to an hour and a half. The Village Crone is one of those games that heavily depends on who is playing them, here you have very well designed mechanical tools to have a great game, but how they will be used is completely up to you and your game group. By modular board and deck of schemes it gets loads of replayability. One thing I would like to see in the future is some kind of asymmetry in the witches, maybe each of them could get one spell that only they can use or specialization in group of spells, maybe even an additional winning condition. I would be really delighted if an expansion set with those kind of things appeared for it. But at this moment I’m happy with base game where in each play with my friends we have lots of fun in competition for title of the Wickersby Crone.