The pessimistic approach to where our civilization is heading has been with us for some time. It becomes the subject for movies, books, video and board games. Post apocalypse, day after the end of the world. The cockroach-like desire to survive in a completely hostile environment is very often just a background in the study of human degeneration. This time we will focus on the battles between survivor groups in “W ruinach Wrocławia”.

The game was self-published in 2019 by Adam Korkosz, debuting on the board games market. Graphic design was taken care of by Ludwik Łukaszewski. “Wradislavia” (alternative game name) also has its digital version posted on its website. We can play against AI, get to know the mechanics better, and buy a copy of the game. 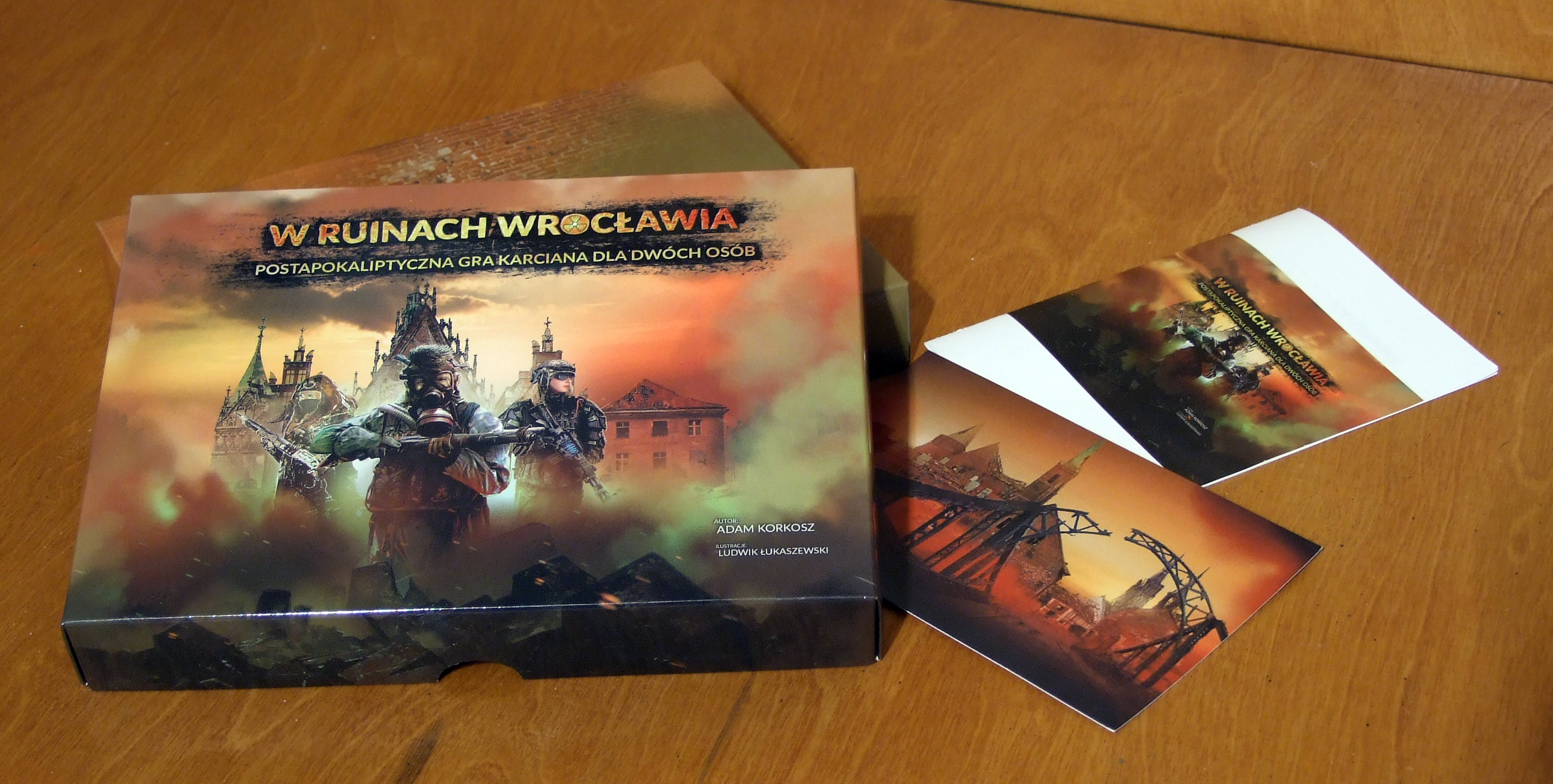 The box is in the size of a larger book, made of varnished cardboard – it brings to mind 90’s games. Looking at the amount of components, I would assume it could easily be half of its footprint. Thanks to this, the game would become more pocket-sized, by taking up less space, we could always have it with us. After opening the box, we will find a deck of 55 cards. It is the most important component of the game and at the same time the best one – stiff, thick, matte and pleasant to the touch cards are quite inviting. Next, we have a 10-sided die, a stack of thick cardboard tokens, and wooden cubes that act as markers. Finally, there is a 12-page rulebook and a postcard with errata for it. 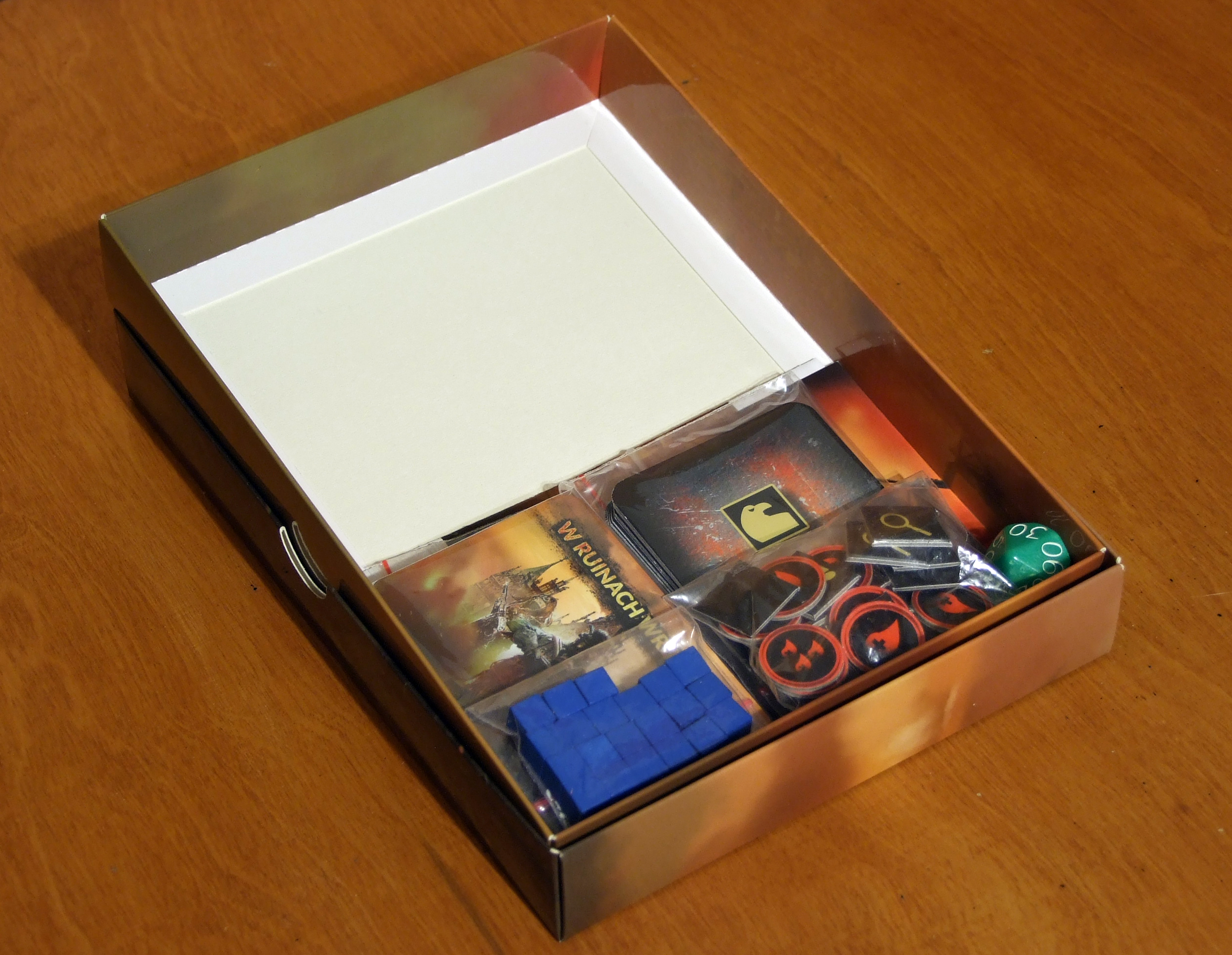 Graphic design of Wradislavia is atmospheric and fits in with the post-apo theme. Almost everyone I played it with, automatically mentioned feeling a vibe of Metro 2033 or The Road. The symbols on the cards are quite clear and logical, once we learn the mechanics of firing in connection with the help card, we shouldn’t have too many problems understanding most of them. Unfortunately, the whole thing feels as if the game was in the prototype phase. The base of the box does not contain any information, there is no description of the game, list of contents or pictures of the setup. The lid lacks iconography about the estimated duration of a playthrough, the number of players and the suggested age for Wradislavia. Virtually every component, except the wooden markers, has some shortcomings. The die, although in the game we achieve results from 1 to 10, we are provided with a percentage die with values ​​of 10-00. Order tokens do not have a reverse side, where it would be practical, so that components can be split faster between players. Among the soldier cards we have “Zuzanna”, whose name is the only one written in bigger font size. “Perun supplement” cards have a description of how to use them from an earlier version of the game rules. The last is the rulebook, about which I will have more to say, when discussing the rules. Here, I will only point attention to its graphics – the cover suggests incorrectly cropping the graphics from the lid of the box, inside at first glance we will notice a large deficit in the illustration department. For example, there’s no point in looking for pictures of components with a description of what is what.

We are in Wroclaw, ruined by the World War III. Actually, that’s everything the note on the game’s BGG page and the title of the game tell us. The manual does not contain any introductory text. Also, the character cards themselves have no quotes or flavor text, except the title and equipment name. Generally, if it wasn’t for illustrations, “W ruinach Wrocławia” could also be the “Final mage duel” where from our brotherhood of seven, we would send three mages to the arena, and everyone can draw power, shield someone or cast their special spells. Even the names of the characters suggest that a name generator was in use, where in conditions of war or clan fights, members of some groups would rather use nicknames. 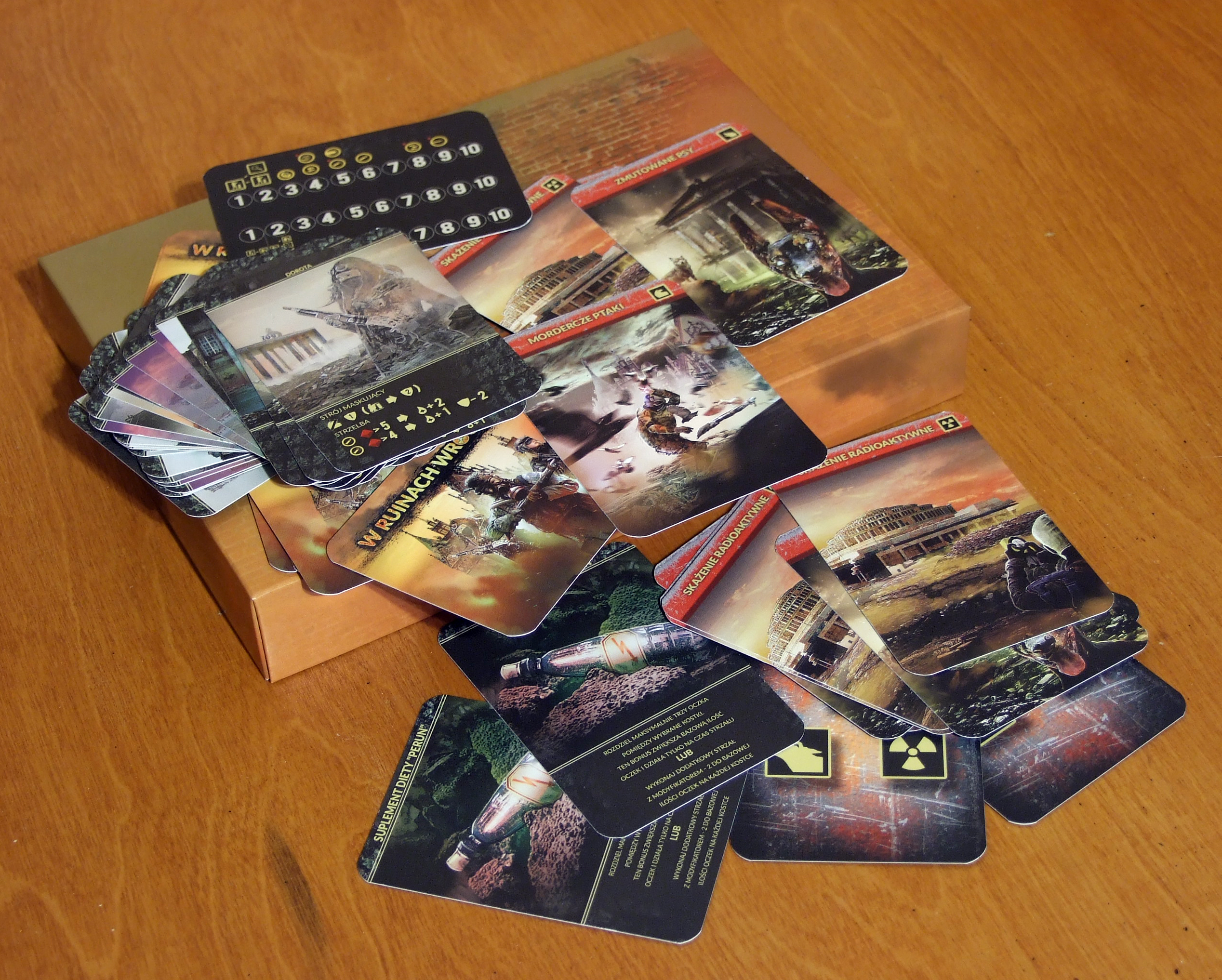 Mechanically, the game is very simple. In outline – we roll the die twice, draw an environmental card, play three out of seven warriors and assign them orders, lay out one more environmental card, and roll the die again. Based on the results and orders we have chosen, we will try to deal 5 damage to the opponent’s soldiers to finish them off. The first player to be left with less than three character cards in hand, loses the game. Let’s get back to the rulebook here – it is written incomprehensibly. About 30 people had the opportunity to test this title with me and everyone had big problems with understanding it… what’s more concerning, even now I am not convinced that I understand everything correctly. The complete lack of examples of gameplay, illustrations, faq’s and explanations of some terms can be frustrating. Example – What exactly is the middle track on the help card for, or should the sniper rifle have three consecutive values ​​checked after a roll or after applying modifications? When I played the browser version to clarify some aspects, some of rules for orders were omitted there. If, according to the rulebook, one could conclude that the sniper gets a bonus from the unmodified result, it only had it after the modification. These types of inconsistencies, together with the mistakes that occur with the components, give a strong feeling that the game is in its prototype stage and should undergo a lot of checks before it goes to the final print. 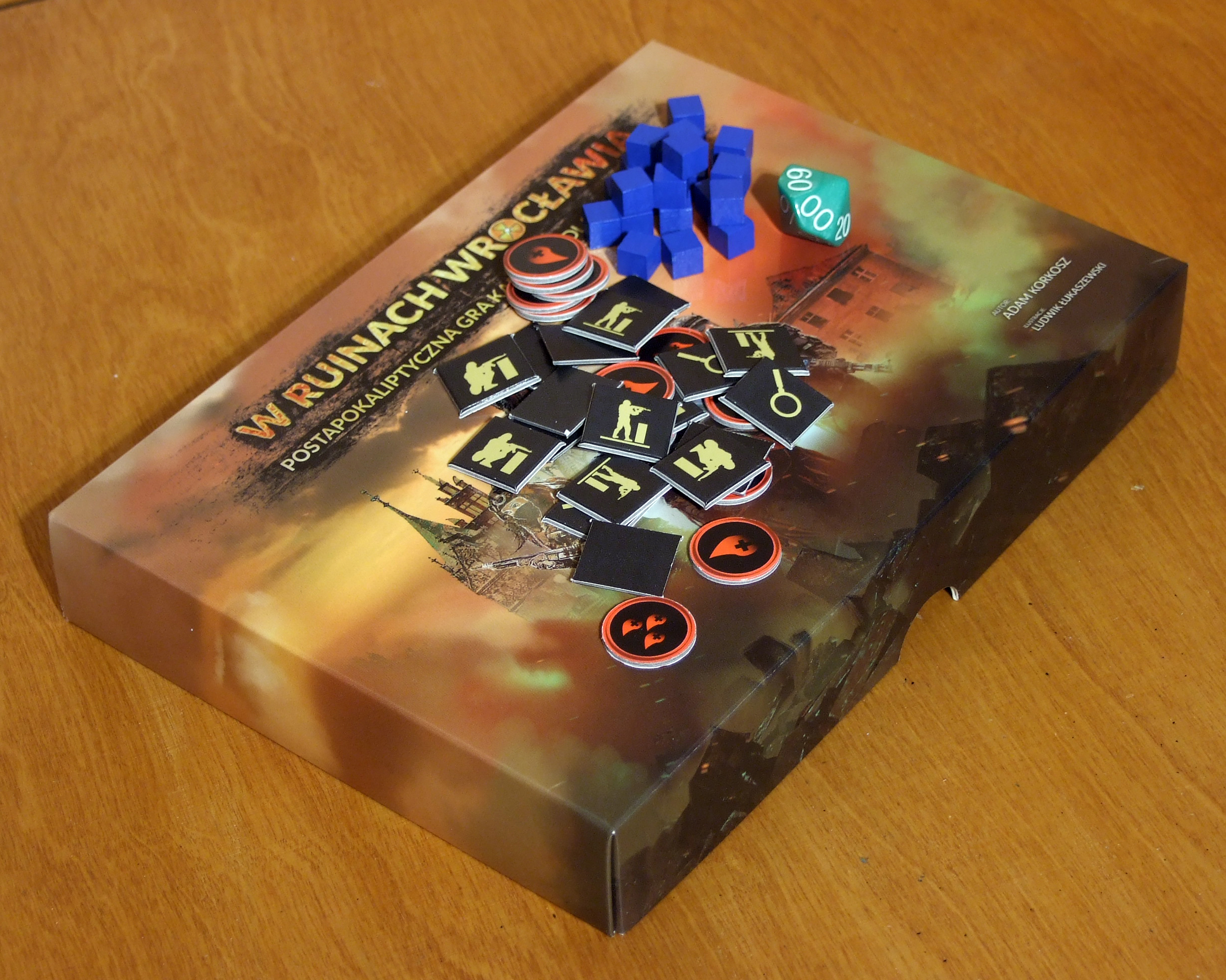 When it comes to the gameplay alone, I like the idea. Different weapons, battlefield conditions, orders and the decision whether to focus on using one of the known die results or pushing your luck in the third throw. The execution is also interesting. But what struck me after the first game and strengthened with each subsequent one, is the impression that this series of duels should not be a game by itself. The repetition of turns makes the entire game very monotonous, arduous and boring, killing the excitement of anticipation for how it turns out. This mechanism could be perfectly implemented in a bigger adventure game, full of descriptions and stories, where one round of combat would add  exciting stakes to it. Although it is only one round of “three against three”, so its repercussions would have to be more significant, but it would add flavor in anticipation of the outcome of the duel. 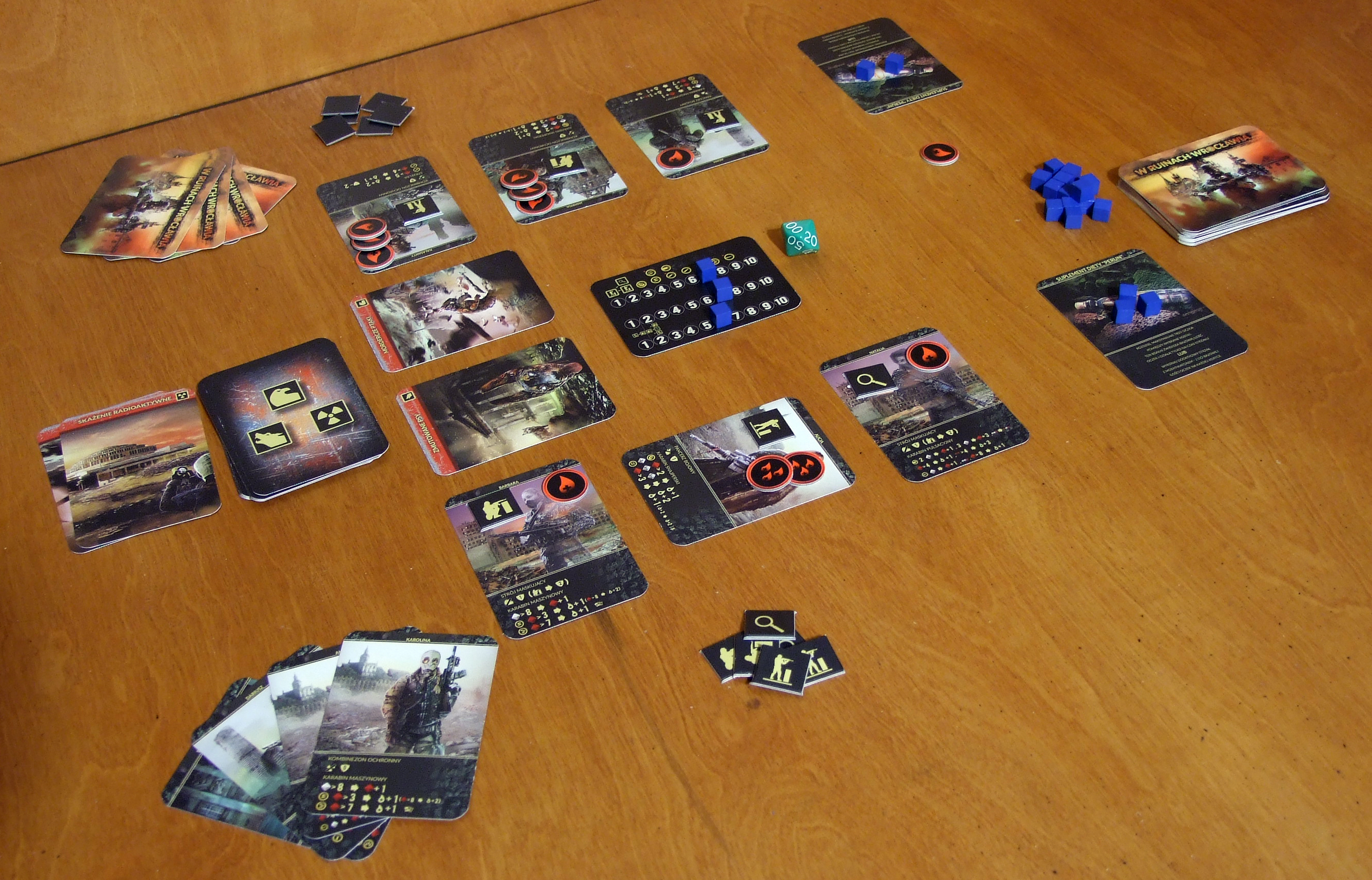 One play can take two people about half an hour. Despite the fast turns and lack of downtime, sometimes players can get stuck in a stalemate situation, then the game will drag on. This, together with the shortcomings mentioned earlier, means that I cannot recommend Wradislavia to anyone, other than as a curiosity with clever mechanics.