So it’s October already, a month when horrors and thrillers of the movie class from A to Z start to crawl out of the basements, wardrobes and attics of cinema halls. By frightening or disgusting us, even sometimes unintentionally making us laugh, they will fill our time before Halloween parties. Today I will present to you a board game for fans of “spooky” genre – Halls of Horror.

The game is the debut project of the Draw Distance publishing company, previously known under the name of iFun4All, which, until now, has mainly dealt with video games. The author of this game is Krzysztof Zięba who also did “In the name of Odin”. Halls of Horror debuted on Kickstarter in May 2019 — the first campaign unfortunately failed, but there are plans to start the second one. I really liked the approach to the campaign, because in addition to the game itself publisher also wanted to give players climatic soundtrack and the possibility of self-printing 3d models of figurines, dice tower and some markers. The product I’m reviewing is a prototype, and the final appearance of the components and parts of the mechanic, may still be subject to change. 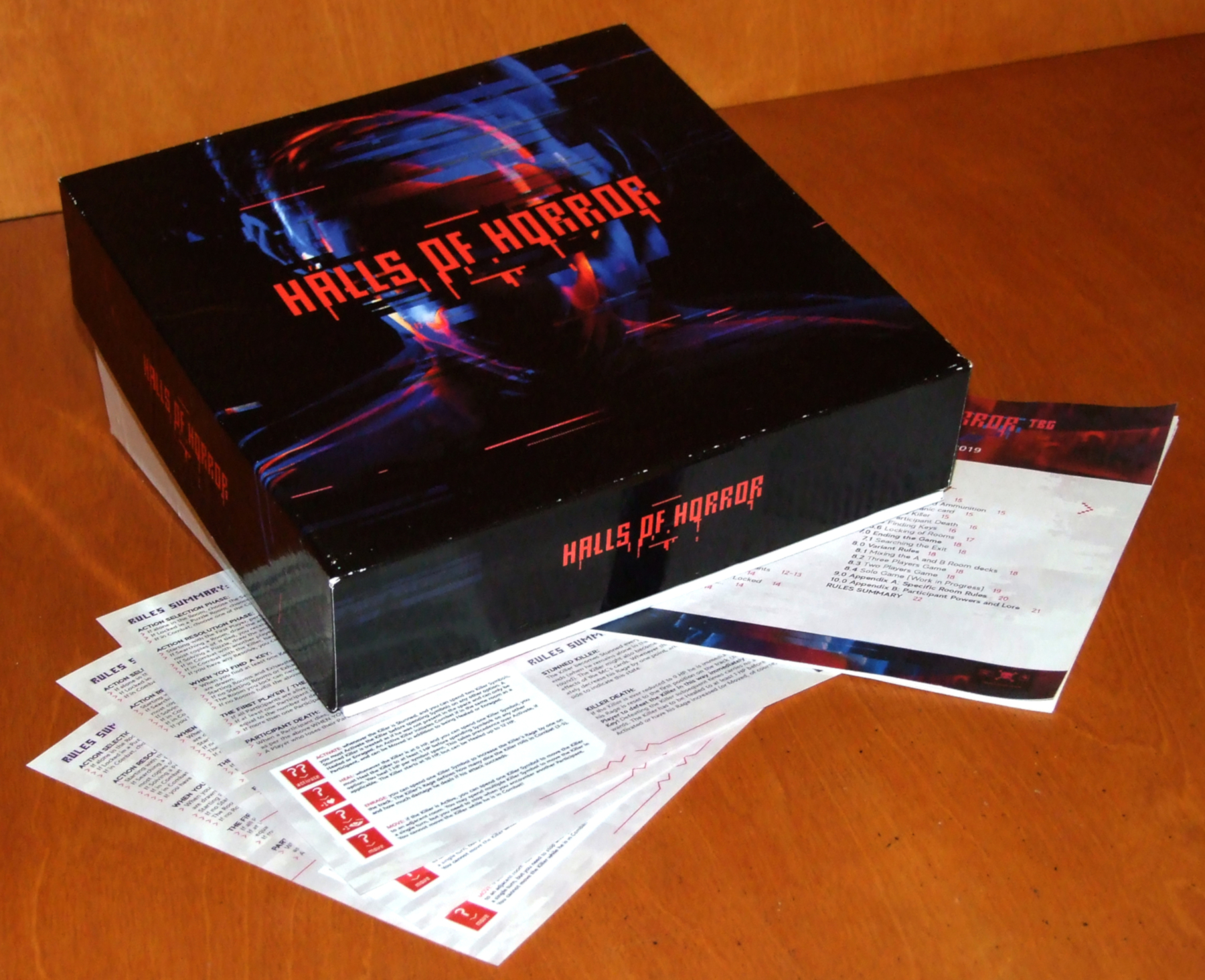 In the slightly smaller than the standard box size, with a mysterious figure and the game title dripping blood on the lid, we find 5 figurines of heroes and a psychopathic killer, several decks of cards of different sizes, a stack of tokens and 21 small six-sided dice. Figurines are 3D printed and look great with the level of detail on them. Although the heroes could be in a somewhat more dynamic pose to illustrate escaping or lurking action, because while static standing in place suits the murderer who is calmly hunting his victims, I don’t see it as realistic for people who are desperate to survive the night. Cards are quite flimsy, so I preferred to sleeve them up. As for their size and graphics on them, it looks great, as far as I’m concerned. Dark illustrations with the added effect of monochrome aberration are atmospheric, while not interfering with the readability of the cards. The symbols used for actions and tokens are easy to distinguish, and you can recognize some influence of early video games style in their design, which corresponds well with the style of illustration, the whole thing is very coherent; nicely conveying the atmosphere of horror straight from VHS cassettes. One thing I would love to see among the components, are color rings for the bases of the figurines and the corresponding markers for the character cards. With unpainted models, players during the game often made mistakes on who is who.

Former NFL player, a wrestler who accidentally killed an opponent, a vlogging lawyer and a discredited policewoman fascinated by conspiracy theories. All of them wake up in a strange building, where a psychopathic killer walks through the dark corridors. It’s time to start the show. Behind everything is an enigmatic master of ceremony, who observes this sick game through the lenses of hidden cameras. Only one person can escape from the house, there is no place for cooperation, a lucky man who gets 2 keys and finds a way out of the building, will win his life. To spice things up a little, each participant has one key sewn in his intestines, just so we can find out who really is a beast capable of anything in disguise. Can anyone win no matter the cost? See for yourself! 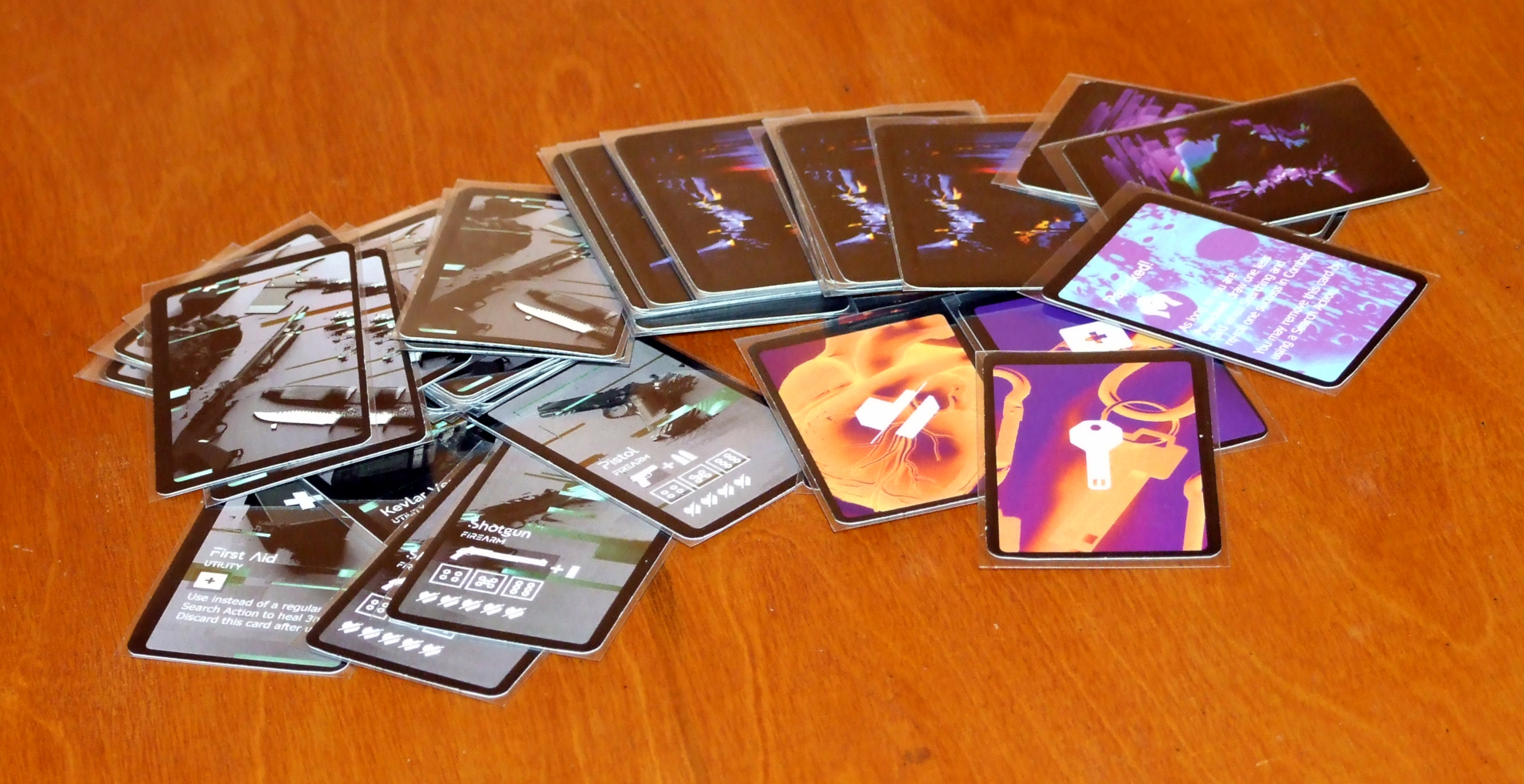 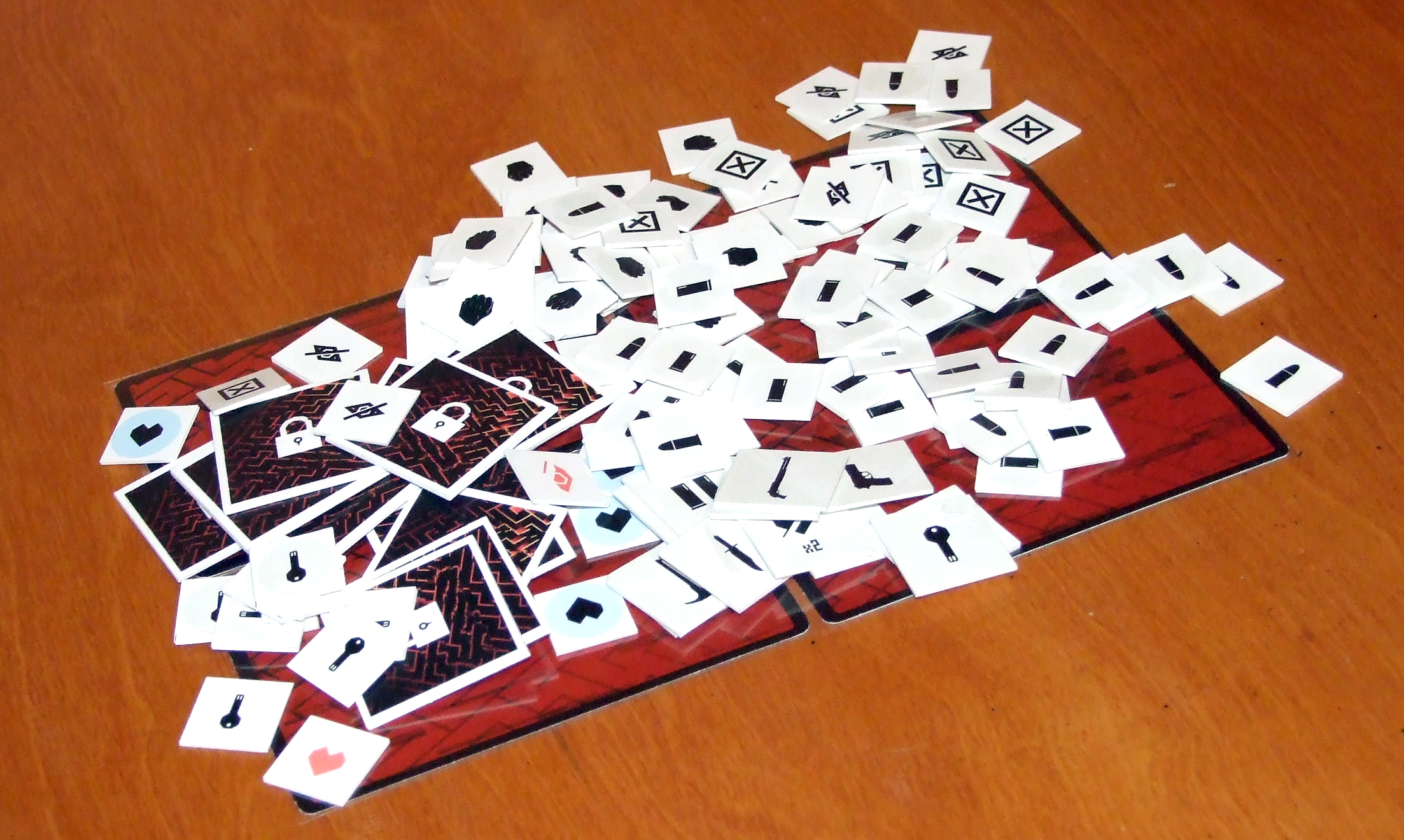 The introduction to the game immediately made me think about horror titles such as “Saw” or “Friday the 13th”, and looking at the components made the latest Carpenter Brut album – Leather Teeth or songs from the repertoire of Dance With The Dead play in my head. Halls of Horror puts a lot of emphasis on its setting and it is the main element making this game fun to play. In my opinion, it is a game that completely fits the genre of Ameritrash – designed for games that focus more on the gameplay atmosphere than the mathematical complexities of mechanics. 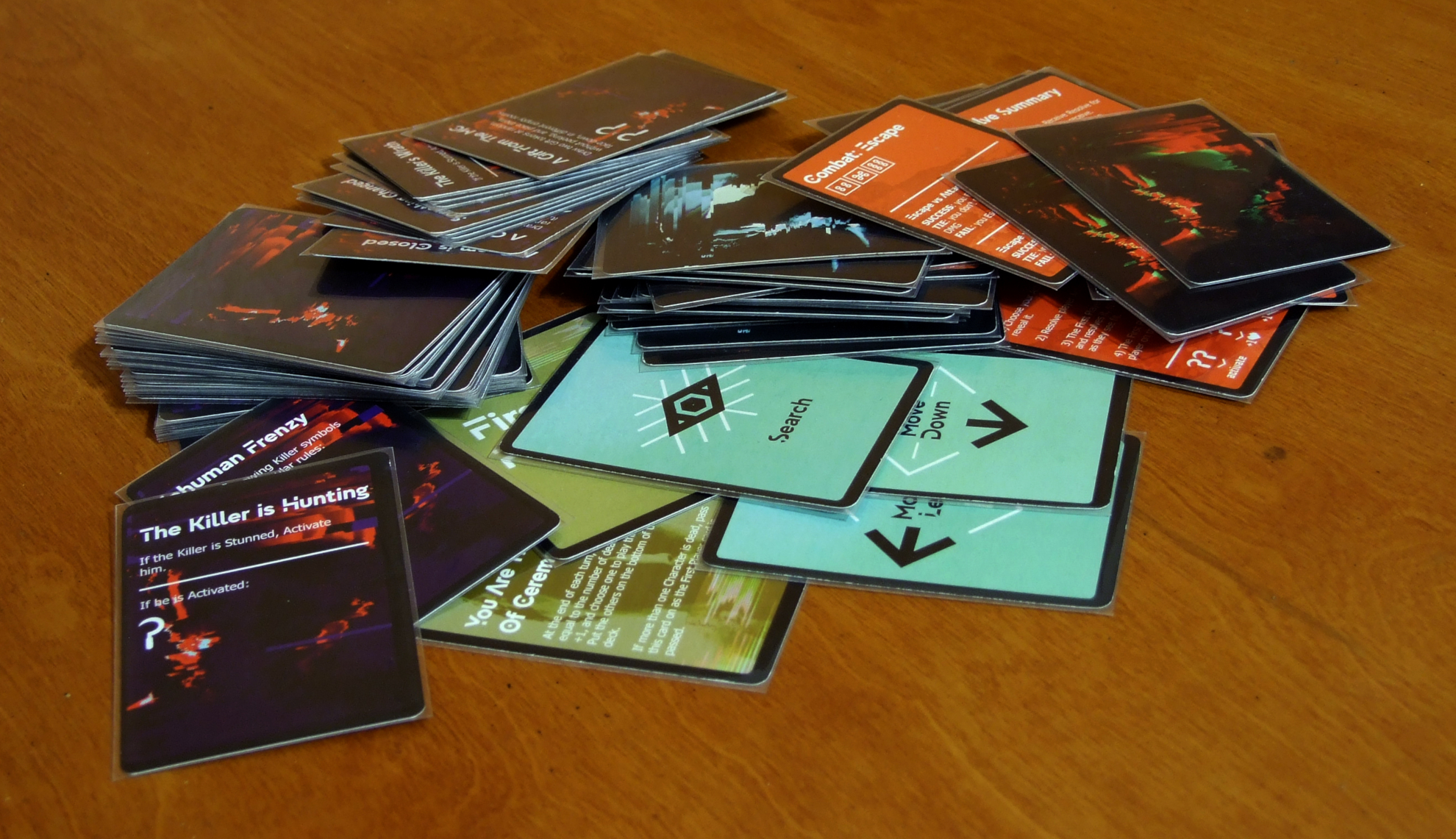 Mechanically, the game is extremely simple. First, each player secretly chooses the action to play, then the chosen actions are revealed and executed. Everything happens at the same time, which means that the downtime has been reduced to a minimum. After the action is resolved, the current first player draws the killer action card, and applies the information on it to the board. The game ends when all heroes are killed, or one of them gets the two keys and leaves the house. We divide the available actions into two types: when we are alone in a room and when somebody is with us. The first type allows us to move around the board or search the currently occupied room. The second type allows us to decide whether we will run or fight during a meeting with another “roommate”. Searching and fighting are the only actions that will slow down the gameplay in some way, because in the first case we will draw cards from the reward deck to determine the result of rummaging in the room. In the second, we will declare what we use in battle, roll the dice and compare the results. Actions comes with nuances like adding Resolve tokens to the tests, which allow you to reroll dice and increase the chances of drawing cards from the Reward deck, or closing rooms when we get the key or our character dies. All this works efficiently and quickly, building tension in the game. When one or more players dies, control of the killer is completely transferred to their hands, due to which, despite being eliminated, everyone plays to the end.

We can play in a group of 2 to 4 players, but I recommend playing in the largest possible group, because in two-player games it’s happened that the player, who first obtained two keys, was impossible to catch, being always one step ahead of the second player. Having control over the murderer every 2nd turn, he actively was removing him from his escape route. I think the rules for two-player game need some modifications to prevent this. The game’s replayability is high, characters have asymmetrical skills and the board is modular. The plan of the house, in which we are locked, is created from one of two decks of rooms available. In addition, during the game itself, some room cards will change under the influence of the murderer’s action cards. Randomness, despite the usage of dice, does not overtake the game, but rather adds some flavor, and you can control it with aforementioned Resolve tokens.

While playing this game, over time we began to apply some “home rules”. These are only cosmetic changes, but somehow thanks to them we felt even more tension during the game. The first change relates to the definition of winning. The rules say that if the last living hero is killed by a murderer led by players whose characters have previously died, they win, and the only loser is the last killed hero. On the one hand, it engages everyone to play to the end and possibly enjoy winning in a semi-cooperative style. On the other hand, this rule resulted in that a few people with whom I played, aimed for quick death and winning together … In my opinion, it is better to say that if the last hero dies, then everyone loses. The desire to finish off the survivors is the same, and it eliminates the desire to quickly take a powder. The second change concerns the closing of rooms. The player who has obtained the key decides to close the room, thus limiting the playing field. It’s the same when he dies, but in this case he closes 2 rooms. We had the impression, that the decision about which room to close for the collected key should belong to the player who was in the given turn before the player who obtained the key. This way we make it more difficult for the person who has just obtained a piece of the pass to win. As in the case when your hero dies, you decide who will be the next person you will make life difficult for.

Halls of Horror was one of the games I played during this year’s Sabat Fiction Fest convention — where over 60 people have passed through the tables with presented titles. It showed me a lot of spectrum in the reception of the game. Most of the time it took me 5-10 minutes to explain the rules. The game itself, depending on the number of players, could last just over half an hour. Due to how much the game relies on the atmosphere of the movies I mentioned earlier, it will determine how much someone will like it. Mechanics alone will not be able to lock a player at the table, especially if he likes to play Euro games. In addition, the game is sensitive to non-engaged players – “yeah… I’m just messing around” – whose approach quite effectively removes any tension associated with it. Nevertheless, I had a great time with the game and people who like fast, light gameplay full of references to “Texas Chainsaw Massacre”-style movies with the accompaniment of synthwave-style music, will also have fun, and the tension will not leave them until the last moments of play. For me, it is always awesome if you can recall situations from game plays, that sound like movie adventures — for example, when the last two heroes who meet with the killer in the exit room, finish the game by killing each other at the same time. Or when the whole game the lawyer runs with a shotgun, knocking everyone down and calmly going for the win, just to die unexpectedly at the last minute, and the one who manages to escape from the house of death, is the barely alive policewoman sneaking between rooms. I’m eagerly waiting for the 2nd campaign of this game to happen.