Ambrosia – food of the gods, giving them immortality and eternal youth. In a sense, honey with its properties could aspire to that name. I would like to invite you to the strategy game of the same name, in which your task will be to play as the bee hive and be the best one at collecting nectar.

The author of this game is Uwe Bursik, who is also the founder of the Skellig Games – its publisher. Person responsible for the graphics of Ambrosia is Christian Opperer. The game showed up on the market in the second half of 2019 and is available to buy at the publisher’s website. 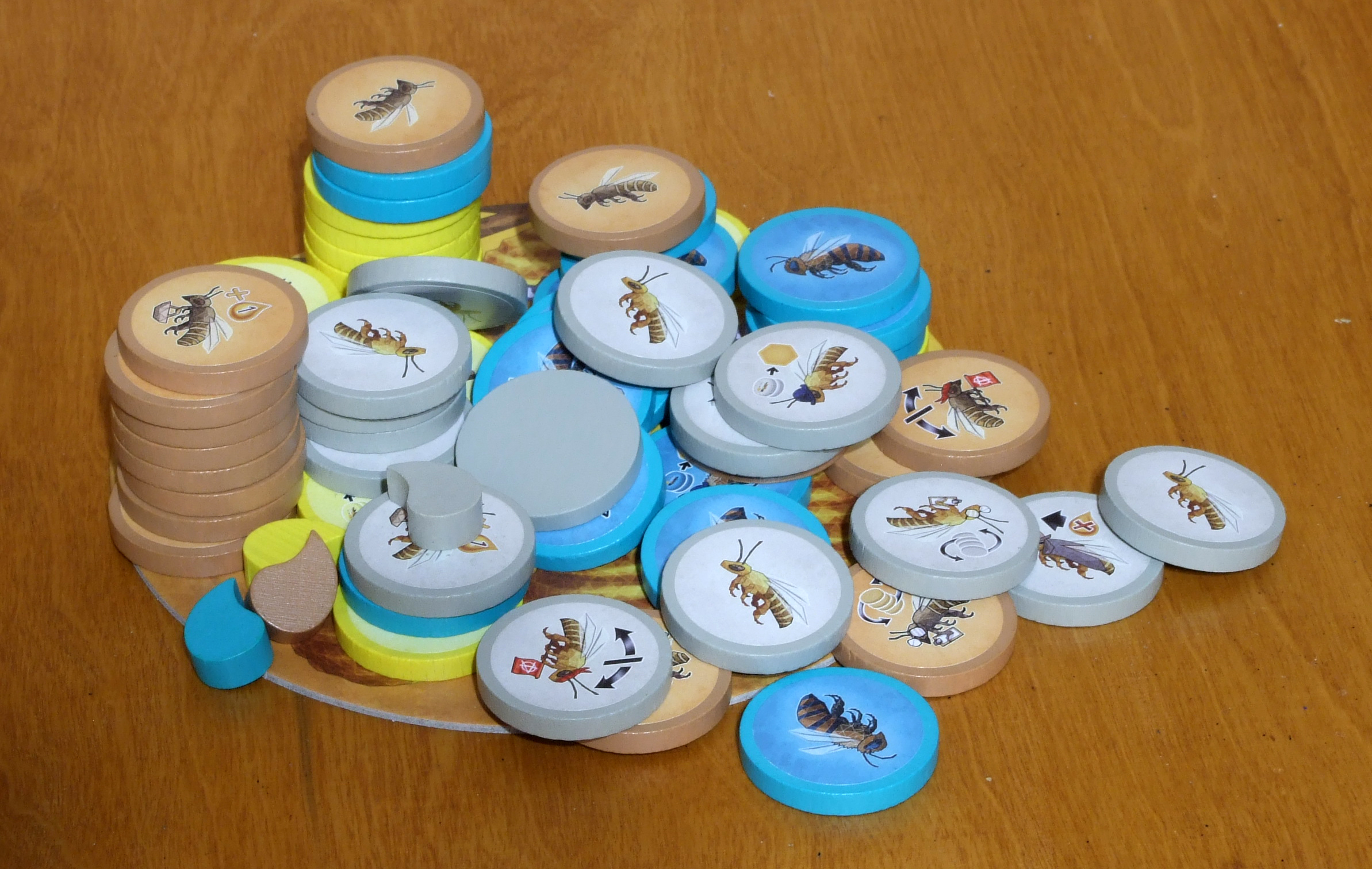 Slightly smaller than the standard game box is decorated with an illustration of a bee hanging above a flower, its graphic style is suggesting a kind of insect eye view. Inside, you will find wooden scoring markers and disks representing bees, with sticker sheets for them. In addition, we have plastic crystals of royal jelly, a deck of event cards, two-sided tiles of the modular game board and boards with a scoring and rounds track, last are “reminders” of the actions of individual bees and royal jelly. The symbols used are easy to understand, and the graphics are pleasing to the eye in warm, vivid colors. Wooden bee discs are varnished and invite you to play with them like you would with poker chips. The game is almost completely language independent, only the event cards and the reminder of what specific bee can do tile are in English and German language. 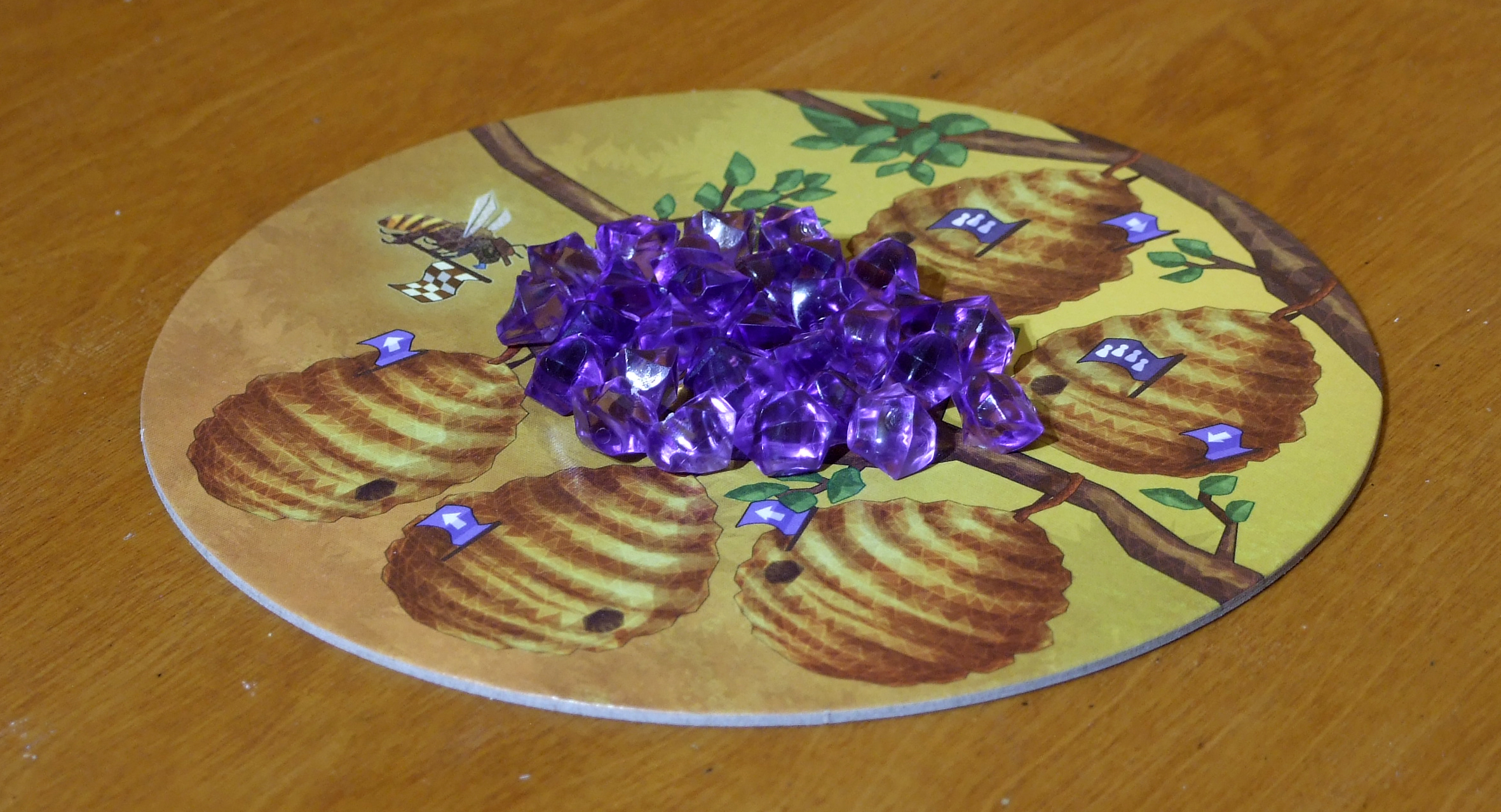 Let’s start with some facts about bees. There are over 20,000 species of these insects in the world. An average beehive can pollinate over 250 million flowers during the day. More than 35% of the food produced in the world is pollinated by bees. Indirectly, accelerated climate change and pesticide use have been reason of a 30% decrease in the population of hives every year for the last 10 years. Adding to the fact that it is a dog-eat-dog world between hive families, it can be said that it’s tough to be a bee these days.

In Ambrosia we will take a role of such an ordinary swarm. The theme of bees, despite a very good fit to the game mechanics, could easily be changed to something else. The author himself in an interview mentions that during this project, first imperative for him was to create the mechanic, and then the team working on it discussed the possible topics to be used as a setting. As a result, there was about 100 options to pick from, but in the end, the bee theme was decided upon. And, in my opinion, it was the best possible choice – circling around the meadow trying to block other bees from work, while wanting to get as much nectar as possible. With each harvest, you decide what next specialist to send to the field and when to use up valuable royal jelly for a little boost of your hive. Everything for the swarm! 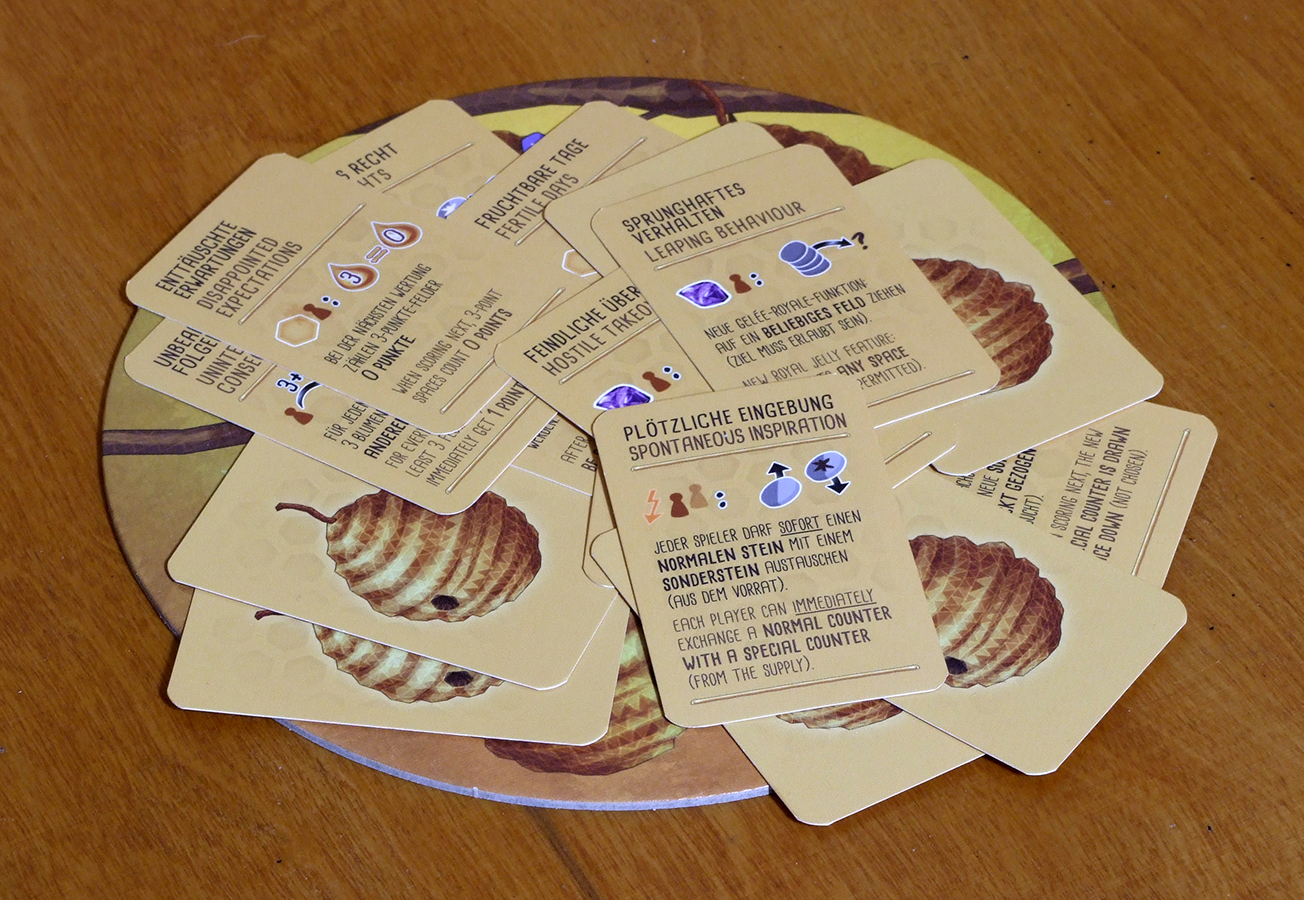 The rules of the game are extremely simple, the player’s turn consists of making a move and checking if he can then have possibility to make next move, if so – his turn ends, if not – his scoring phase follows and next player starts his turn. The game continues until one player completes a certain number of scorings. 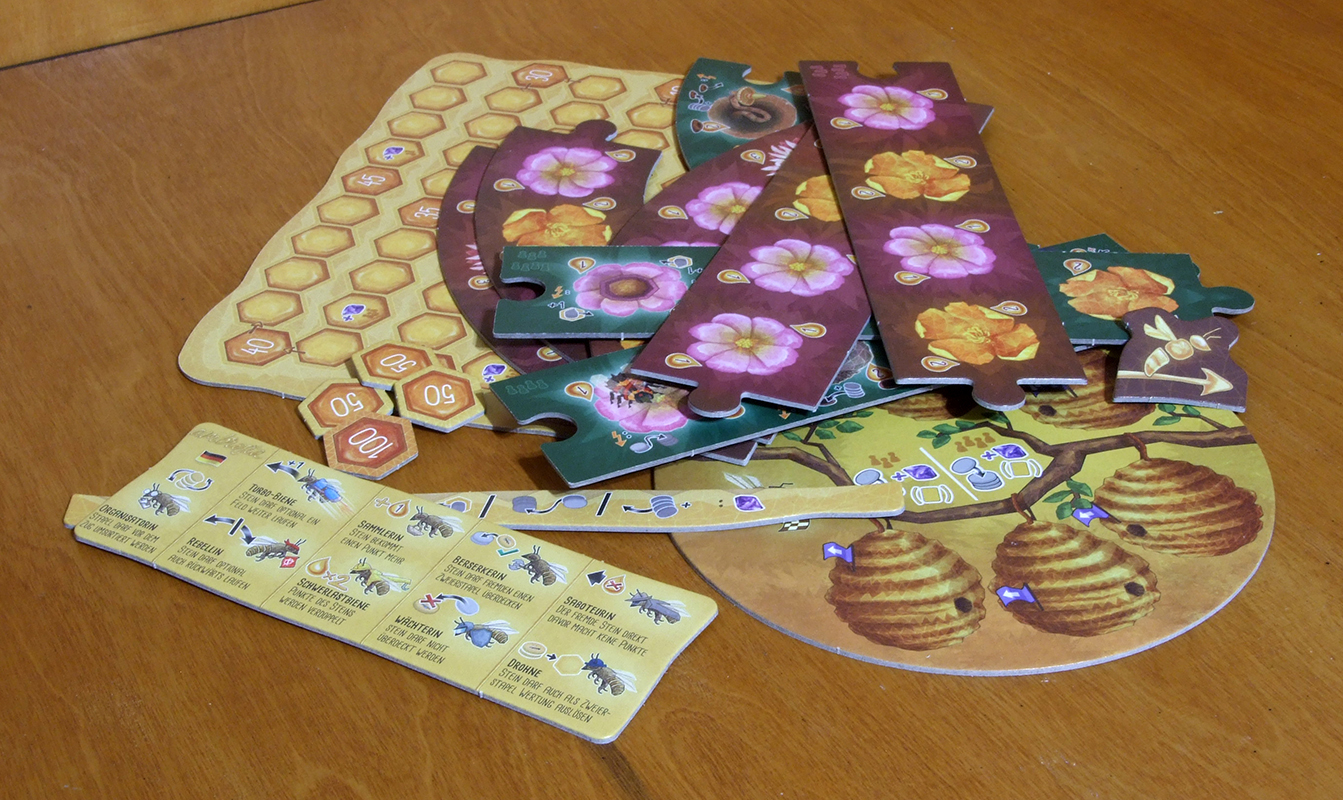 We move our swarm in the form of a pile of wooden disks representing bees. To move the pile from which we will take bees it must contain at least two disks, we decide how many disks we will take from that pile and afterwards we will progress them for that many spaces on the meadow. As there will be bees with special skills on top of the pile over time, we always will have to follow the rules that apply to them. If we have the opportunity to make a move, we can not give it up – sometimes it may not be profitable for us. While moving, we can attack the lonely bees of opponents, we just cover a single disk of another player with our stack, so the trapped bee is blocked and will not score points while it is covered with at least one of our discs. You can’t attack a bee that is already blocking some disk, we can’t make “bee sandwiches”. The direction of movement on the board is clockwise.

In scoring phase you need to count the value of fields with nectar next to the flowers occupied by our unblocked bees, next you need to gather your swarm on one of the occupied flowers (you can’t end up this gathering on the blocked bee of the opponent) by our swarm and adding a new “specialist” bee on top of that pile in exchange for basic one. 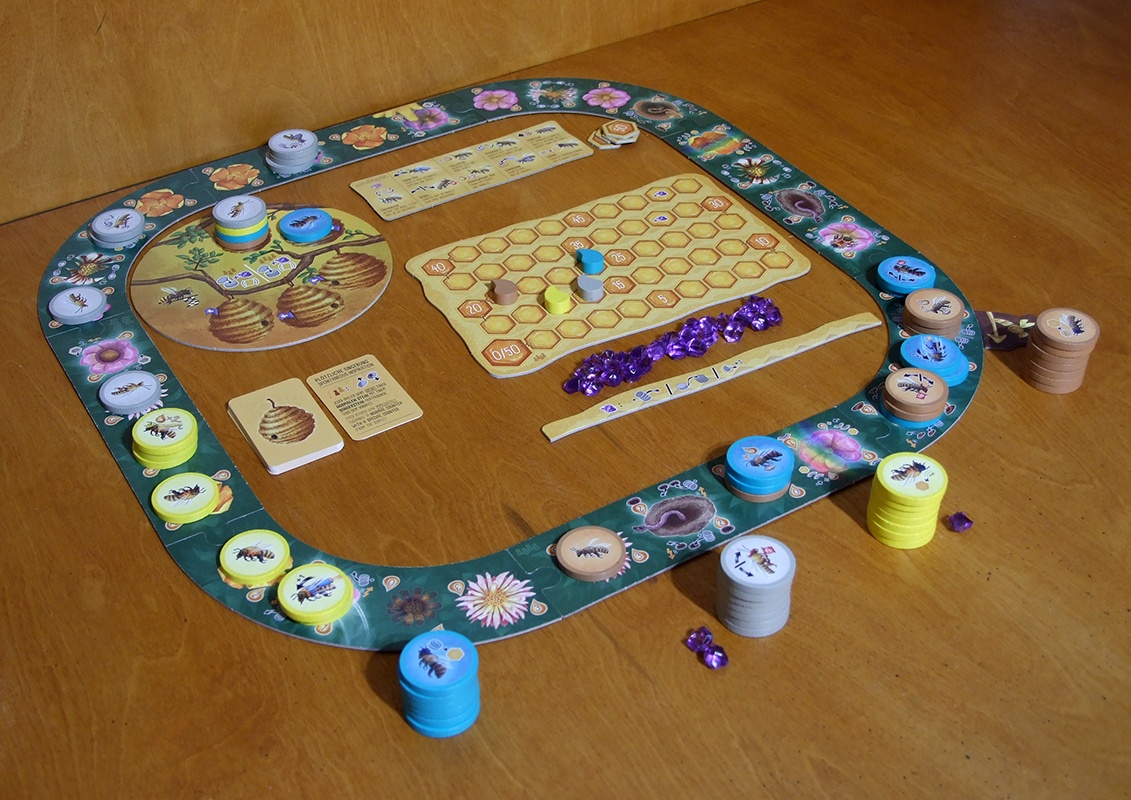 Ambrosia in its basic version is a symmetrical, non-random strategy game. Where flower fields differ only in point value. If we need an additional factor that we would like to think about while making the move, we can play on the other side of the board. On it, apart from point value, flower fields also have various effects altering the gameplay. If, for a change, we would like to have a random element in the game, just add event cards that will take effect after each scoring.

The game in its non-random setting is very well balanced. It all depends on the tactics we choose and the order of adding specialists bees. The mechanism of compensation in the form of royal jelly, quite efficiently allows you to catch a second wind. We get them when we score last in a given series and when we last pass through the field with it on the scoring track. You can use them to free your blocked bee or to make an additional move – each once per turn. At the end of the game, we’ll get one victory point for each unused crystal. 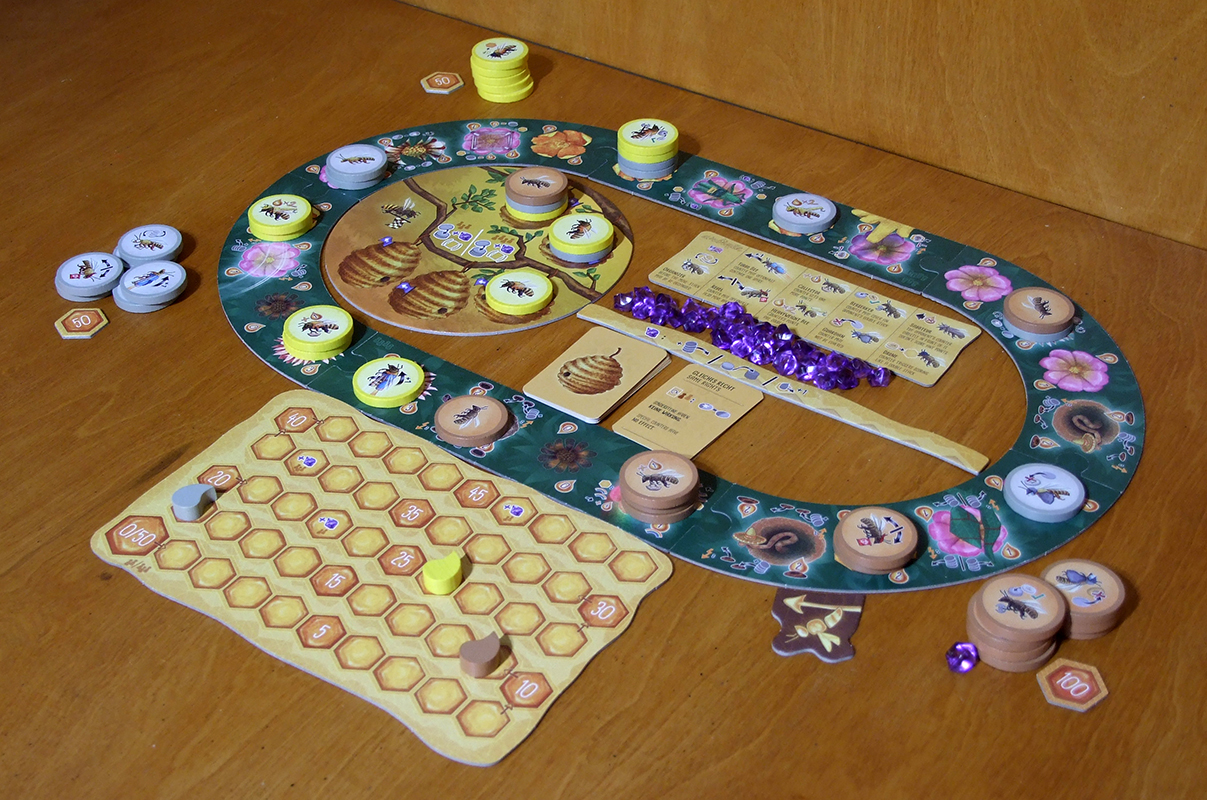 You can play in a group of two to four people, usually one play will take about an hour, depending on whether we have “heavy thinkers” among the players. Modular game board size scales with player count wonderfully. I love to play non-random version on basic side of board the most. Full symmetry in player powers and making decisions who to block and when to score gives a lot of satisfaction. Sometimes we can block another player with our movement, forcing him to score when he is in a situation where it does not pay off. It takes about five minutes to explain the rules. Thanks to the gameplay variants, Ambrosia will work great for any group of players focused on negative interaction but not attacking and avoiding someone else’s attacks also can pay off as a strategy.