Classic games like chess are timeless. It is not that common for me to come across a board game that makes an impression similar to those classics, but this time I found the title perfectly fitting the elegance of its design within this type of games. A dice game without any random factor – DiceWar: Light of Dragons

The game first appeared on the market in 2015, released by SunCoreGames. The authors are Adrian Bolla and Bujar Haskaj, and it is illustrated by Malte J. Zirbel. Since then, the game has been expanded to include three more factions that are available on the publisher’s website. What  undoubtedly deserves commendation, is the fact that on the same page the publisher has provided download section for rulebook, board graphics and cards from the basic version of the game. Thanks to this, by making a simple pnp version (print and play), you can test this title yourself. 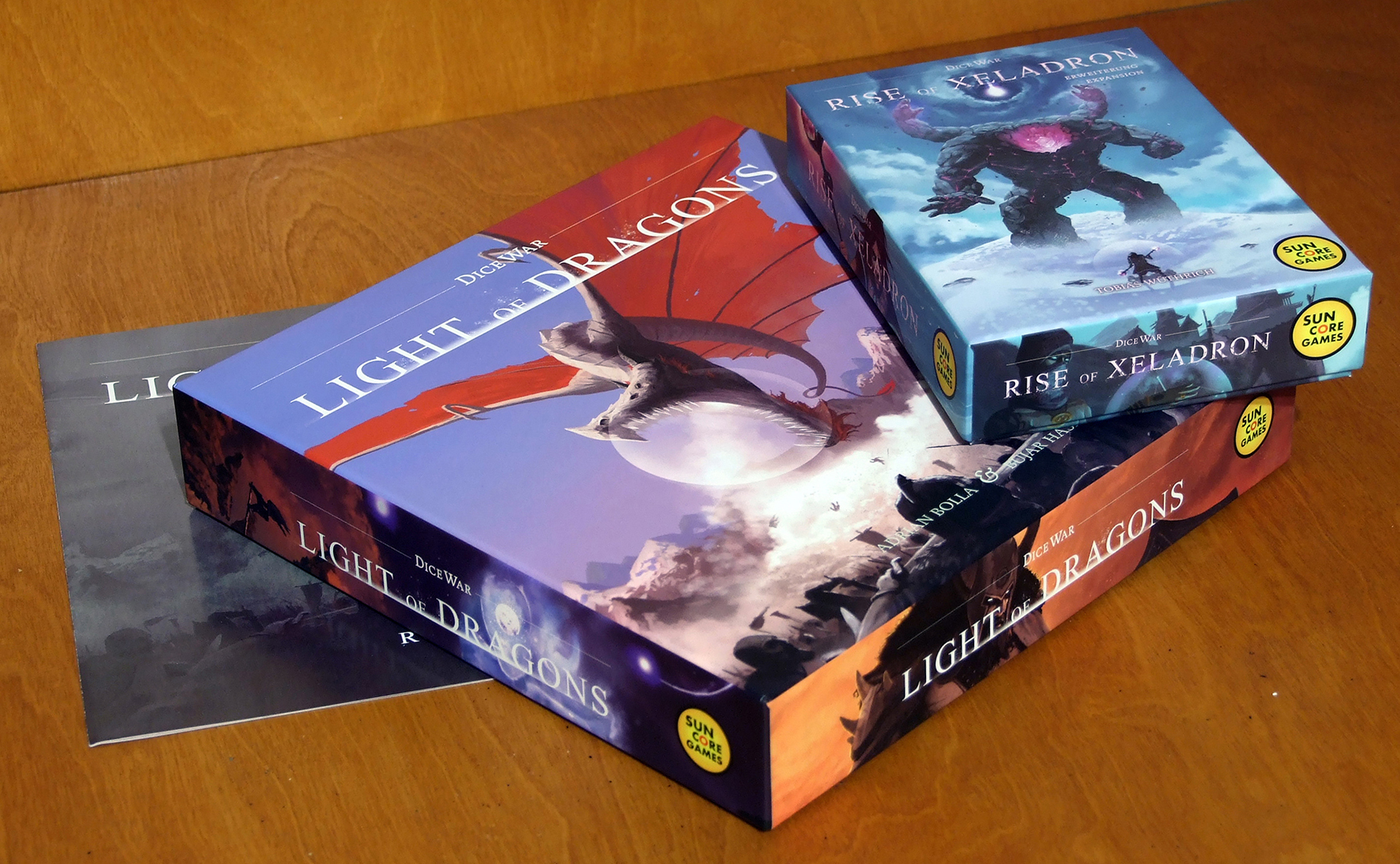 In the small box, with 25 cm x 25 cm footprint of the base game you will find two sets of black and red faction dice and cloth bags to keep them in. Next, there is the battlefield board, wooden Victory and Trigger point markers, terrain tokens that modify the battlefield, and a set of cards with explanations of units, turn and terrain modifications. In an even smaller box of the expansion set, we get one set of faction dice in a bag with wooden markers, terrain tokens, and cards describing the units. 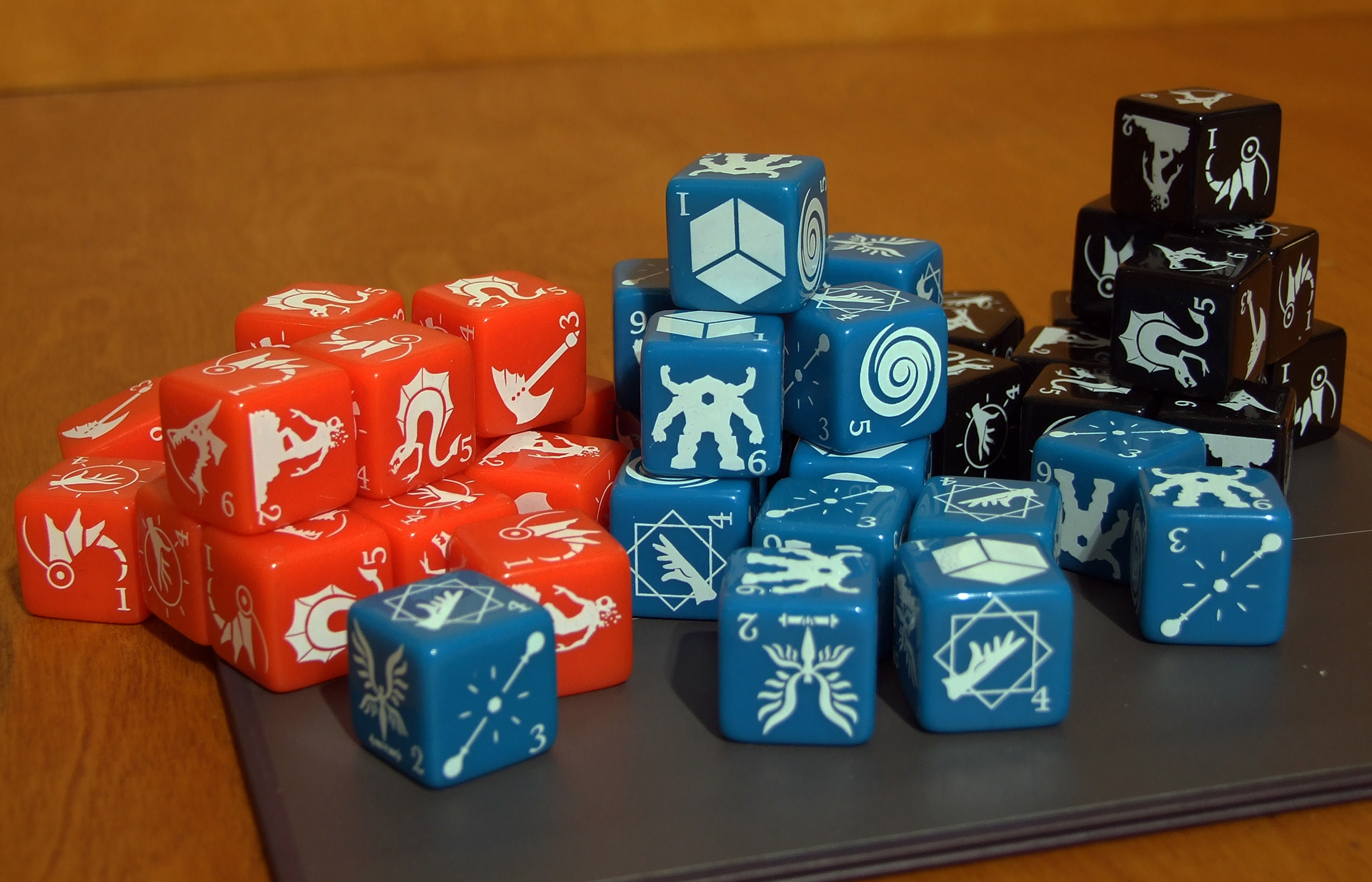 The quality of the dice is great, they are large, comfortable and heavy. The print on their sides is varnished so it won’t wear off. Unit symbols are clear, legible and suggest a thematic link to the name of the unit and its illustration on the card describing it. Large, stiff cards, where the reverse is adorned with an atmospheric illustration, unit name and flavor text. The face contains a clear description of how it works. The board is small, but it is adequate. Each side of the conflict has its own scoring tracks, and the battlefield in the form of a grid of squares is sprinkled with terrain elements seen from bird’s eye view.

In the game we play the role of one of the tribes of ancient creatures inhabiting distant fantasy worlds. Each faction strives for domination over the others. We know little about history, basically the only information is provided by the texts describing the units on their cards. The world is in a state of constant war, according to legends, created by Light Dragons, inhabited by fantastic creatures like basilisks. Combining the plans of the etheric and physical reality which are haunted by the ghosts of the dead wishing to return to battle. Filled with magic used by wizards belonging to the mystical Red Covenant. On the one hand, one could say that the game is completely abstract and we could skip the whole setting. On the other hand, the mechanics of each unit accurately present its description on the card. This makes it very pleasant to learn and deduce world history, and encourages to delve into the game outside the game itself. For me, this is an additional factor that makes me want to lern of the other factions with their history even more, and I look forward to new ones that will bring more pieces to this puzzle. 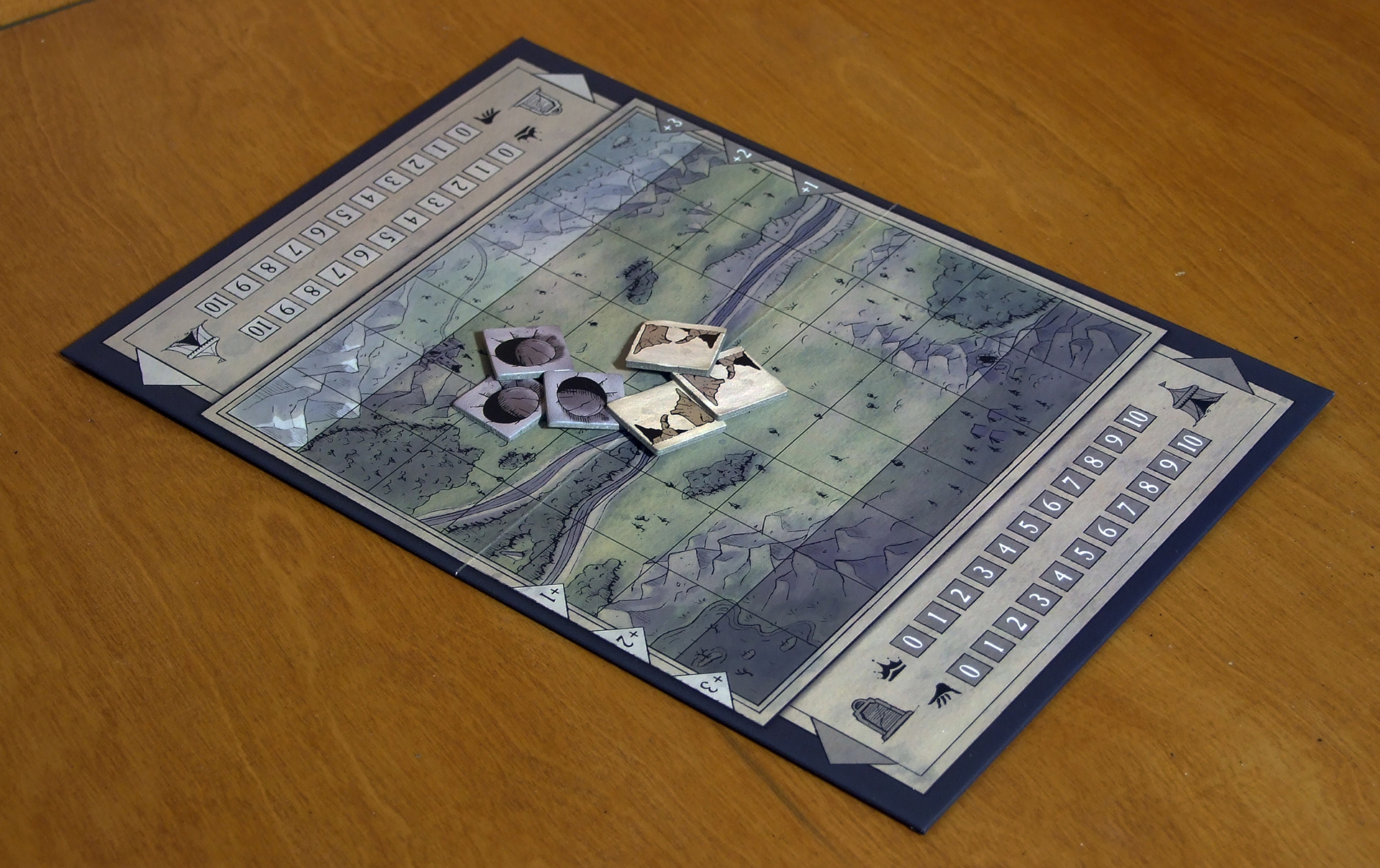 The game mechanically resembles chess, we have a board with a grid, on which we will move our pieces, in this case six-sided dice. We start by creating a starting army, we have 10 points to spend, and the units’ value is also their strength. Purchased units are placed facing enemy units on the extreme fields of the board. In our turn, we choose a unit and use it – making a move, attack, skill or promote it by one level. Promoting a unit is turning the cube to the corresponding face. Sometimes the skill allows us to recruit a new unit from our reserves – we have a limited number of them. An attack is a simple capture by taking the space of an opponent’s unit that’s of a lower level than the attacker – the exception is level 3 units that can defeat level 6 units. A defeated unit does not return to reserves. The value of units captured is also the amount victory points we earn for them. By taking 10 victory points, we win the game. An alternative way of winning is introduced to the game with each faction – in the basic version these are tokens of three ruins that we place on the board. During the game, when one player has units in all their spaces, he immediately wins the game. 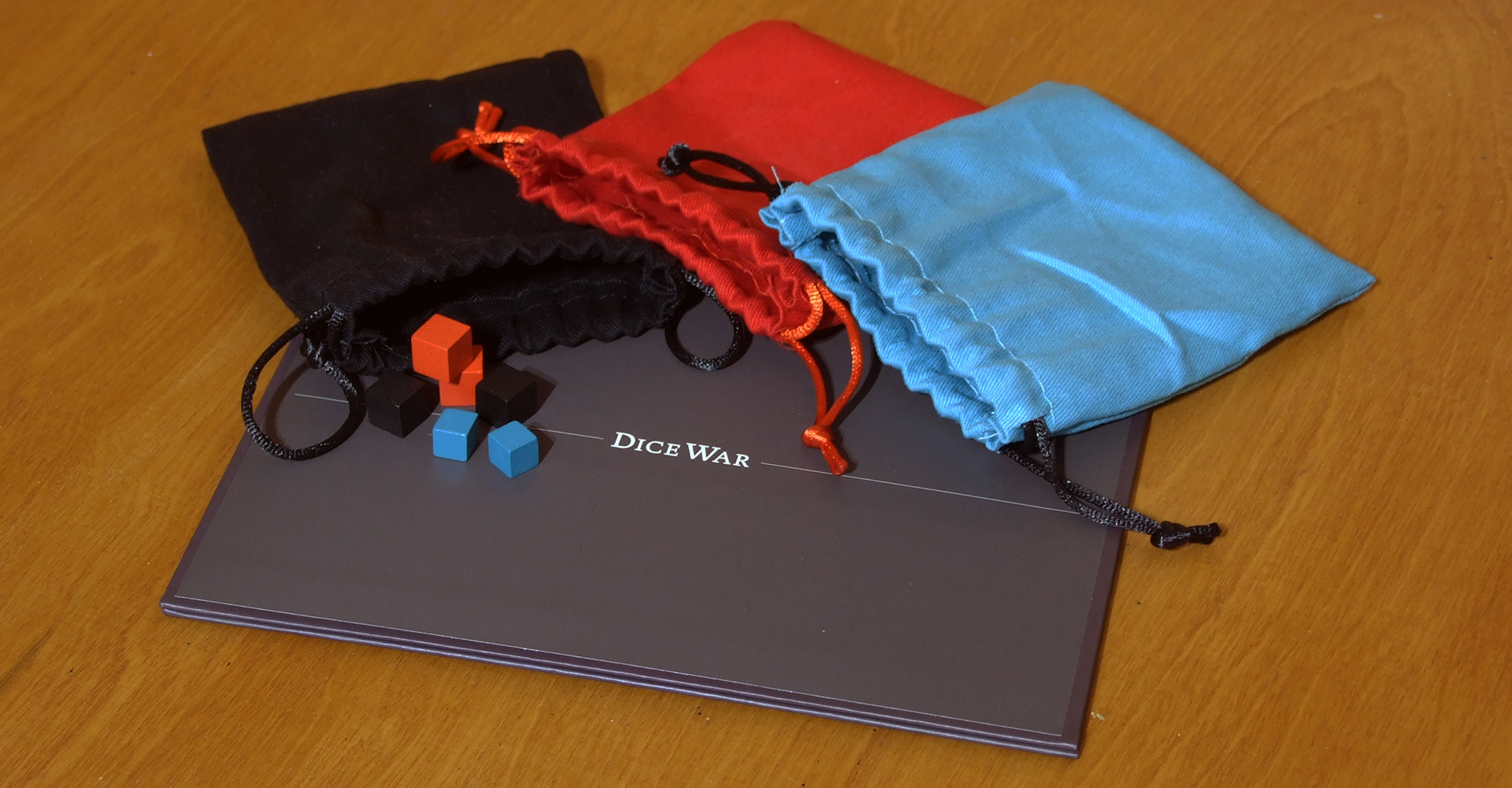 The cards will tell us how a unit moves, attacks, and how its skill works. After about three plays of a given faction, you will remember most of its rules, but it’s always worth having these cards at hand. However, if we don’t need reminder cards, the game will gain an element of mobility. Because, from that moment we can simply only carry bags with dice, wooden markers and terrain tokens. Replacing the board with your own equivalent, e.g. made on cloth or drawing it with chalk on the pavement or with a pen on a piece of paper. 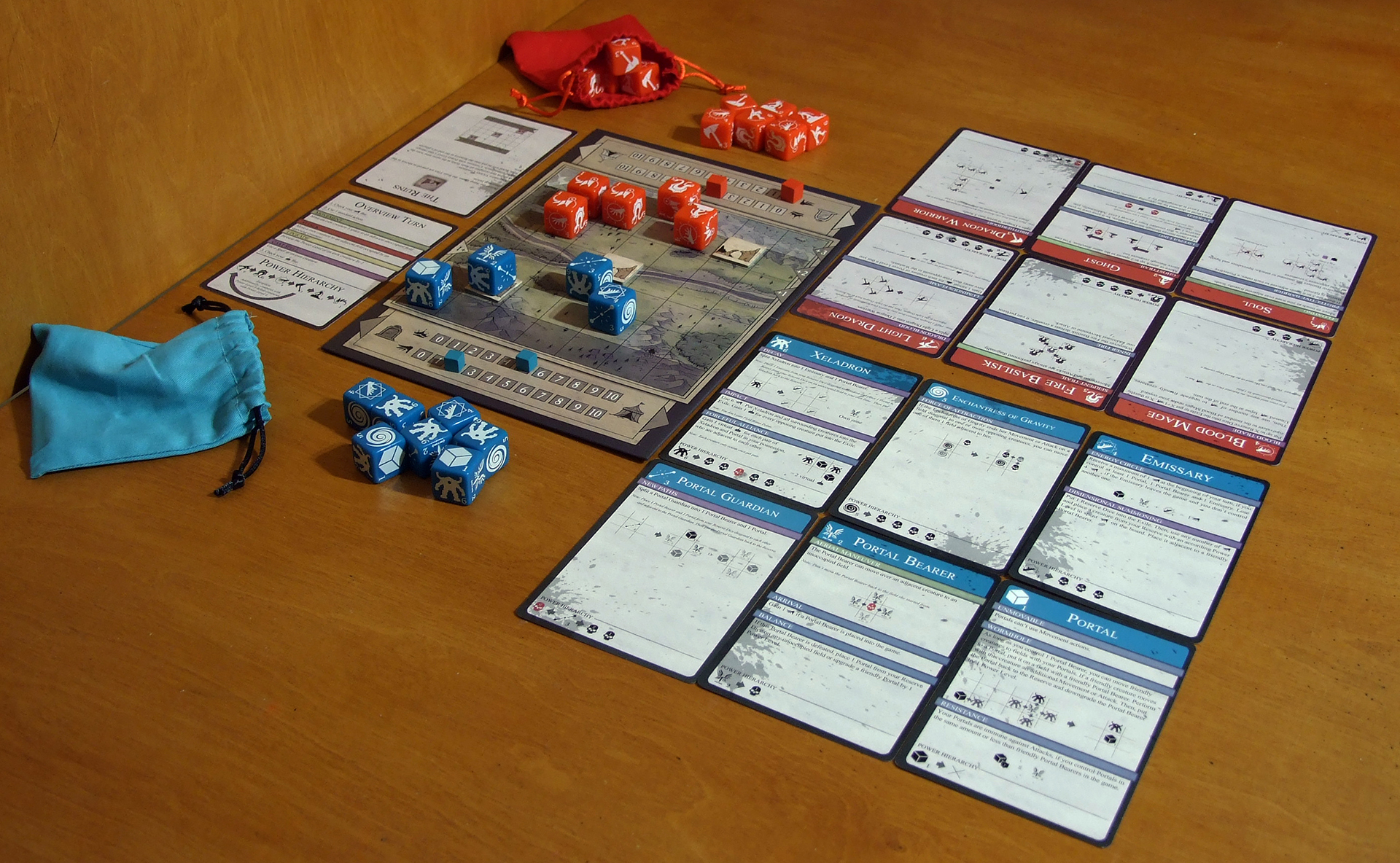 I can say that this game will perfectly suit the tastes of people who like classic games like Chess or Go. A duel of two minds in which the winner is the one who can plan better, predict the opponent’s moves and is able to draw the maximum strategic potential from the faction he plays. This is a typical game of mistakes, with each stumble upon our decision we bring the opponent closer to winning. The game balance of the factions I tested is very well preserved. Anyway, if someone wants to exclude faction balance as a deciding factor for victory, he can always play a mirror game using the same faction. One play, depending on whether we play with “thinkers” (to which group I unfortunately belong), can last up to an hour, so if you are notorious for analysis paralysis, I would recommend using a “chess clock” application with a time limit per game for each player. If players make their decisions efficiently, the game should take about 20 minutes. Additional elements in the form of ruins tokens or craters will add variety to the game, if we decide that we want some optional condition of winning, beyond victory points. DiceWar is a game of the “easy to learn, hard to master” variety. After playing the Light of Dragons and Rise of Xeladron factions, I can’t wait to play the other two, Roots of Mali and Bond of Demons.