You wake up. You see white snow spreading all the way to the distant horizon. The unfamiliar world seems covered to be in a shroud of silence. You don’t know who or what you are. Yet you feel mysterious wildness inside you, a calling that you must follow. Time to start your journey!

Ascended is the first game published by Saved Game, Lda and its creator David Costa. Published in 2016. They were confident of their product and decided to launch it without use of Kickstarter or some other crowdfunding sites.  The game is availible on www.playascended.com 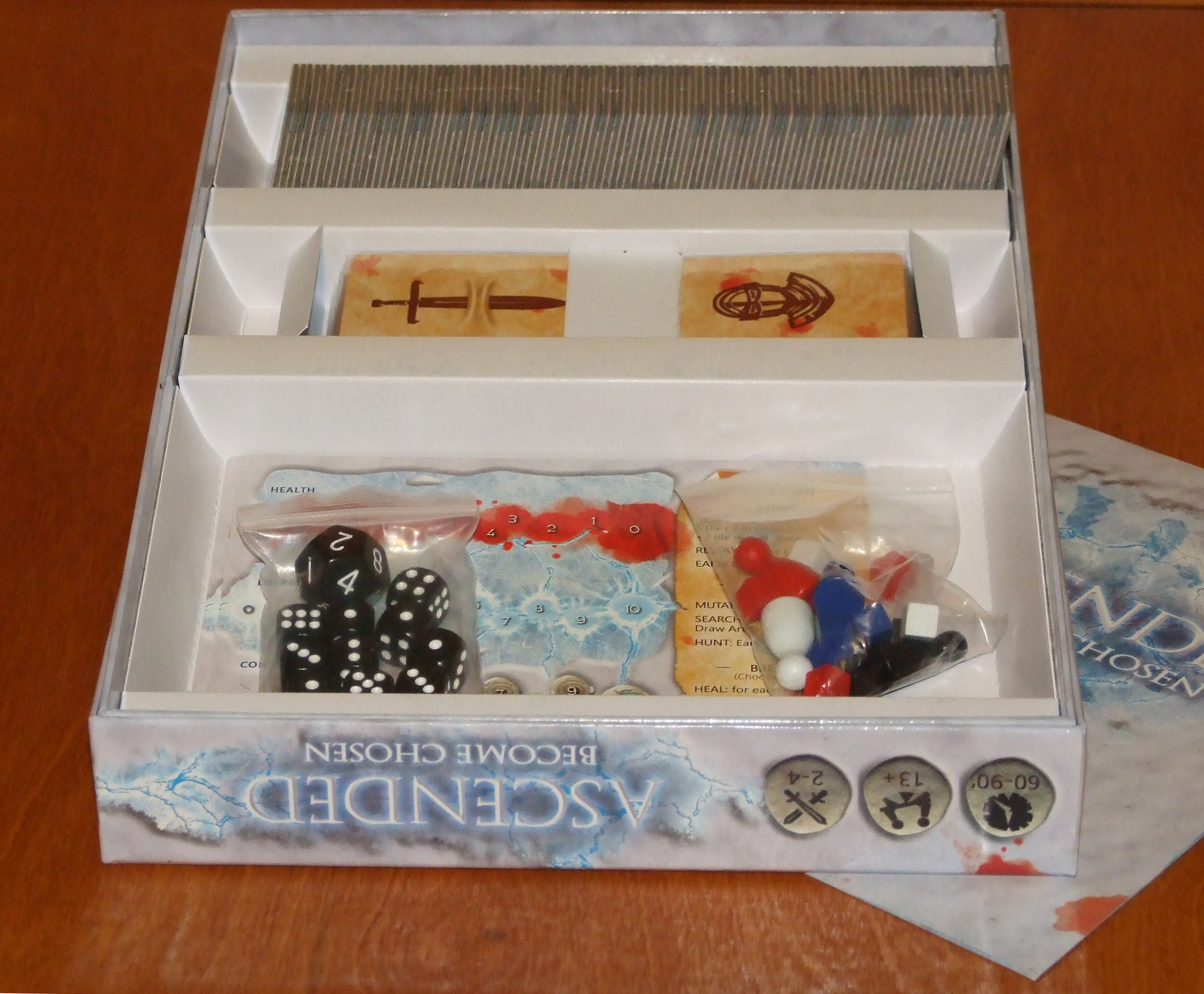 When the damaged package arrived to me I was expecting the game to be crumpled as well. But when I unpacked it, it was in perfect condition. The game box was strong enough to endure delivery. Box is covered with a laminated paper so the corners won’t wear off as they often do i.e. due to transportation. Inside the box we have well fitted paper insert which keeps our components intact.  In components list we can find 100 hexagonal  terrain tiles made of thick cardboard, 4 decks (artifacts, mutations, villains and companions), 10 six-sided dice and one 12 sided die. Next we have 4 player sheets with wooden markers and pawns for every player.  Everything is well made and looks very neat.  Components are very consistent in terms of graphic design and match the snowy-mountain theme perfectly.

Everything looks cool but while I was playing the first game, my friends and I noticed we lack something. While encountering VIllains we often couldn’t kill them in one round and we didn’t have any tokens to mark their wounds. Second thing we instantly noticed was the lack of round counter. The game lasts for 40 rounds so there is no way to keep up without any sort of counter. It wasn’t cleared in rulebook how to deal with undefeated villains and there wasn’t any sort of token to mark where current villain should be (something like activity tokens from Arkham Horror). Keeping Villain cards on the tiles was an option, but because they are significantly bigger than the tiles, it is troublesome most of the time. It might be just my opinion though. After I asked the author about it, he said they are working on it and those elements should be in next printing. In near future they are also planning to release pnp (print and play) files for these components in download section of their site and on BoardGameGeek Ascended file section. While game was in playtesting phase people mostly used the dice to mark stuff. So we used 20 sided die to mark the current round and tokens from other games for the rest. 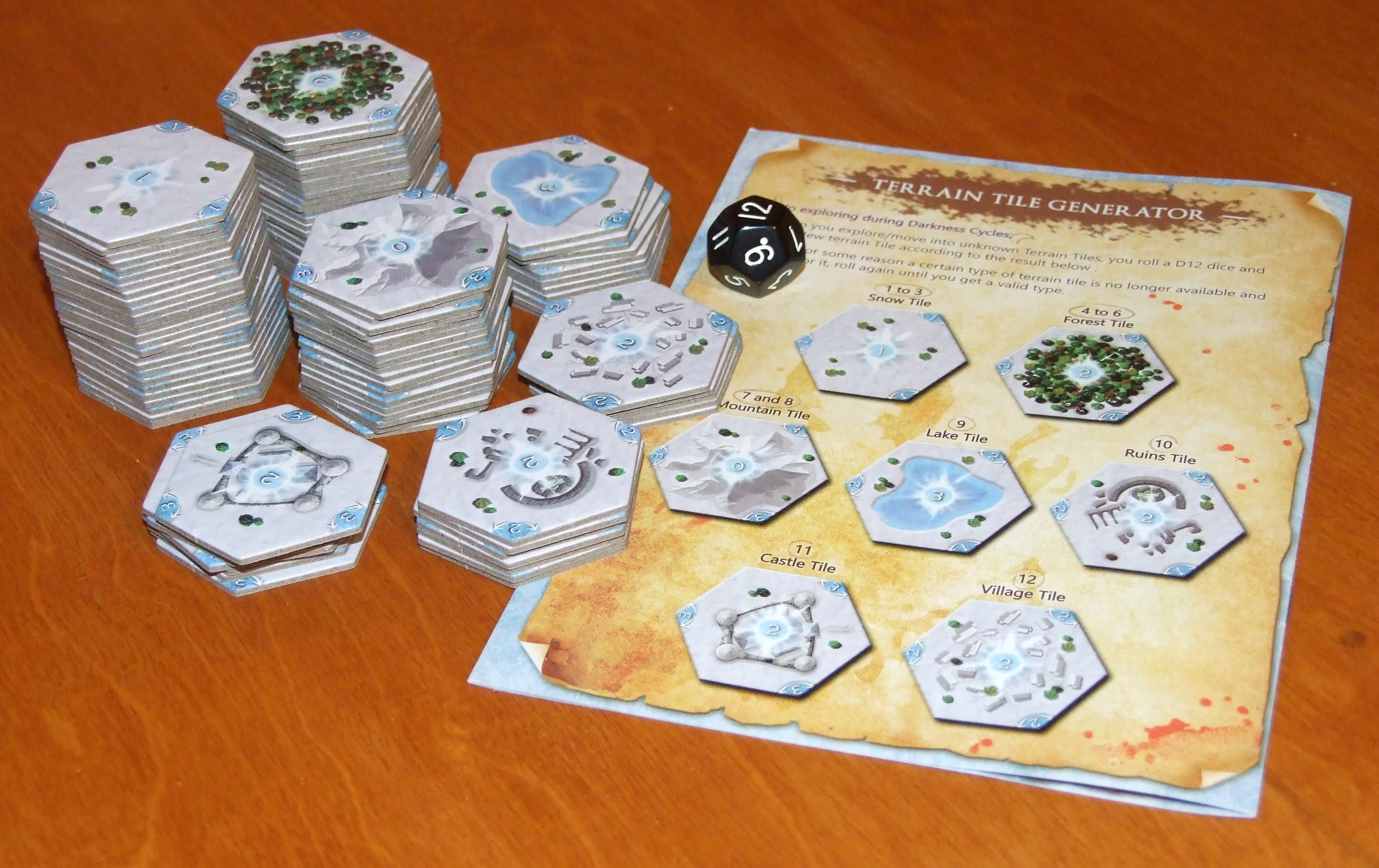 In few words Ascended is a bit of adventure game about discovering terrain around you and hunting for points or other players’ lives. We have 3 scenarios to choose from. In “Yellow moon” – wins the player who gathers and sells artifacts worth 25 victory points. “White moon” is all about killing villains – player who kill villains worth 25 victory points wins. Last is “Red moon” where every player randomly chooses one other player to be his pray – player who kills his prey first, wins the game. If for any reason no one meets victory conditions from played scenario after the 40th round is done, game is won by player with most victory points (doesn’t matter if they are from villain cards or artifacts). There are also rules for solo play called “New moon” which are basically modified “Red moon” scenario with 1 to 3 dummy players controlled by game and us running from them. One gameplay can take from 90 minutes to 3 hours, so prepare yourself for longer game evening.

Besides solo play, every other scenario can be played by 2 to 4 players. Our character is managing 3 types of “resources”: hit points, energy points and control points. Every player in his turn got 3 phase to do: 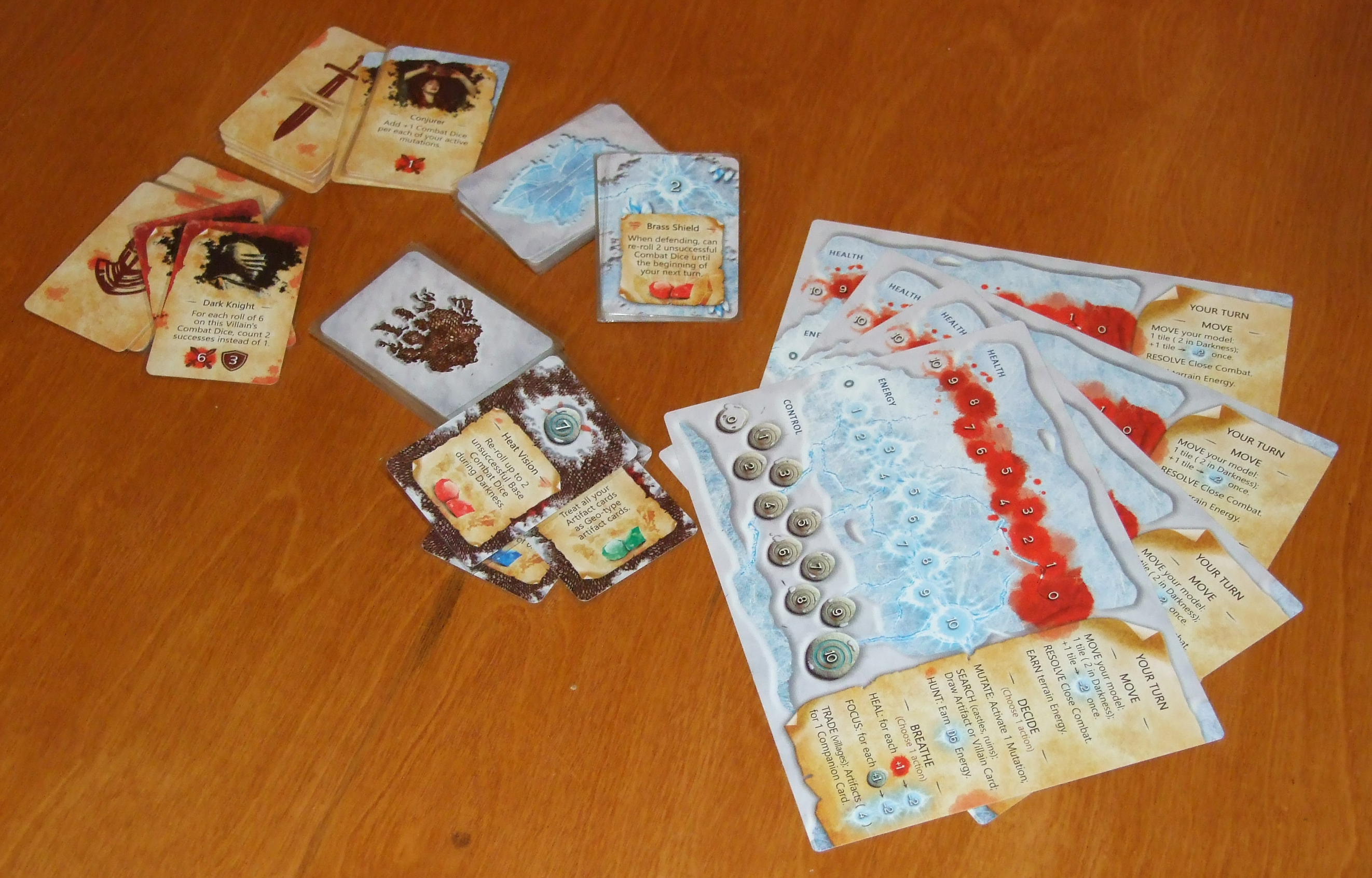 One of the main elements of play is creation of a map, on which we will happily go around. Terrain tiles have printed on them the amount of energy we can have from and combat modifiers they gave us when we are fighting. For the first ten rounds, each player creates his own scrap of map, bringing together random tiles using their “daylight” side. Normally we would need to make a d12 roll to determine what kind of terrain we get, but my playgroup got some idea. After probability check and consulting if it’s ok with author, we started to use a bag from which we simply randomly draw new tiles when needed – this solution simplifies gameplay and makes player round faster. New tile is placed always in spot our pawn is heading to, so map creation is completely random. It’s ok,  in my opinion, because it is only natural that we are not creating the map but only discovering unknown parts of it. After the 10th round player who has the most control points merges all minimaps into one large map in whichever way he wants, and turn them upside down revealing their “darkness” side. Day-night tile change occurs every 10 rounds. As far as it makes sense and is cool thing to do, because at night energy levels and combat modifiers are changing, on third (at 30 round) change of tile sides it can be tiring and a little mood downer, due to usually large map at this point of game. But I like it, and I will stand that this is a good mechanic.  Because type of terrain at which we are defending ourselves or attacking someone is important, and at night time we can’t discover new tiles. It pushes players to strategically move onto known tiles. Which is also really cool feature – especially when you are the one who is prey for every other player. One thing that bugs me in the map randomness, is when no one got lucky enough to get the village tile – the only place where you can earn victory points for artifacts and i.e. you are playing “Yellow moon” scenario. Similar lack of luck in “White moon” when we need to fight villains and there is no castle or ruin tiles. Village-less situation caught me in my first play, and I can say it can draw out game time and spoil the fun from play. 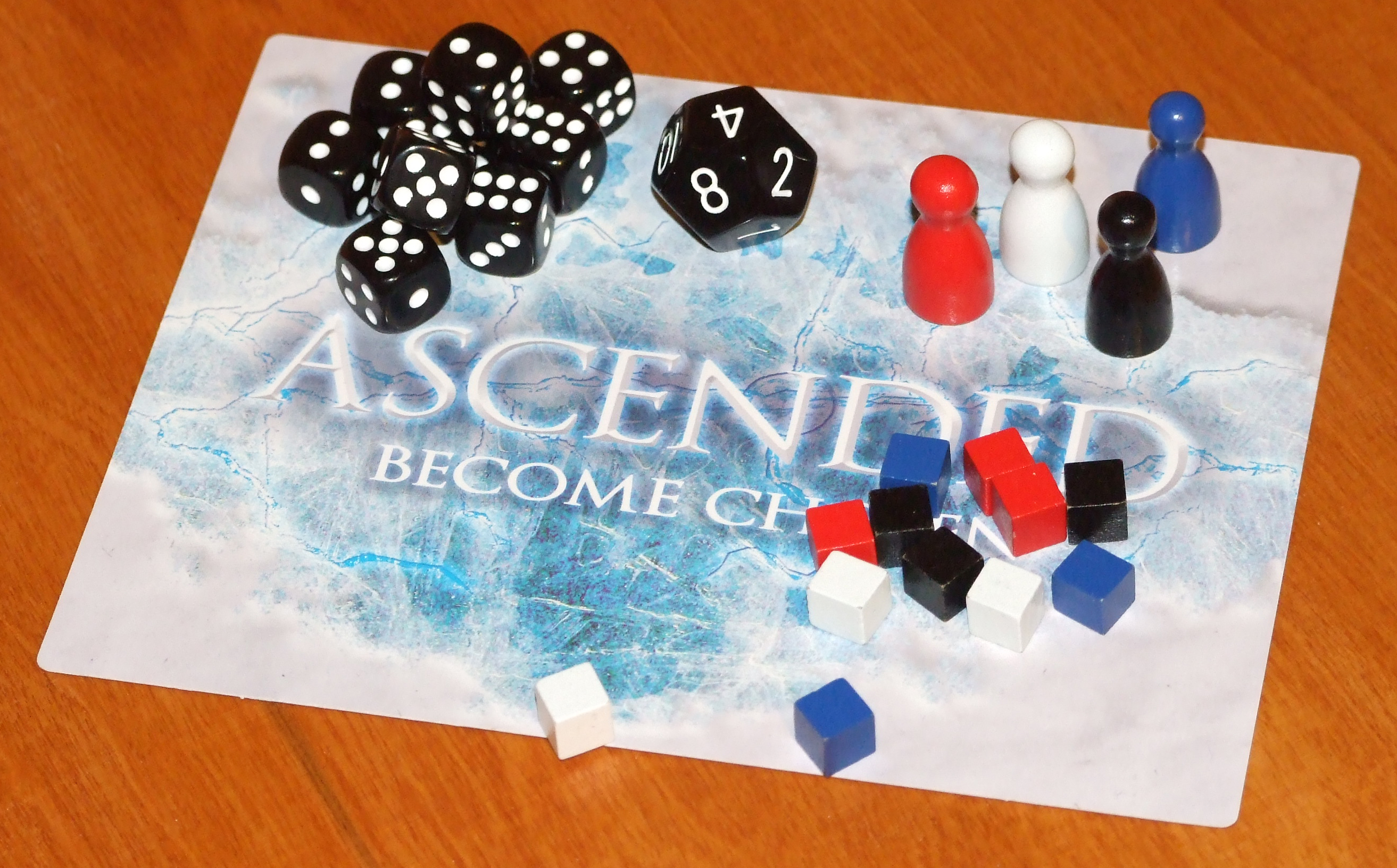 In comparison to many other adventure board games, in Ascended the fight between players and direct negative interaction are meaningful. By using particular mutation and companion cards, we are building our skill set and dice pool. While running around ruins and castles, we are collecting artifacts playing their usually one time action against others. Even the game itself pushes us to hunt each other – remember, if you can’t get enough victory points, simply kill someone who has gathered some and take them for yourself. Only in “White moon” a situation can occur, when everyone will focus on their own ruin/castle tile “grinding” villains for being first with 25 victory point of them – in the end it can be boring. As far as we played, the best scenario for me is “Red moon”, gameplay during this one is fast and everyone is engaged in pursuing their prey while not showing their back as easy target for someone else. All in all combat is random, despite heaving cool skillsets, artifacts, allies and use of terrain it still is only dice throw… and you can be the unlucky one – this is a charm of this type of games and if you don’t like it you may not be interested in this title.

The thing in Ascended that captivated me and makes games from its corner like Talisman or Runebound obsolete from now on, is complete lack of downtime. It’s not that downtime isn’t there, It just feels like there is none of it. Mostly when I’m playing games I also use Instagram when it’s not my turn to share some photos from game sessions. With this game I only have photos from half of gameplays, because I completely didn’t had time for it. Flow of the game is so swift that even when played with heavy thinkers all goes fast, only downtime occurs when we need to change tile sides from “Daylight” to “Darkness”. 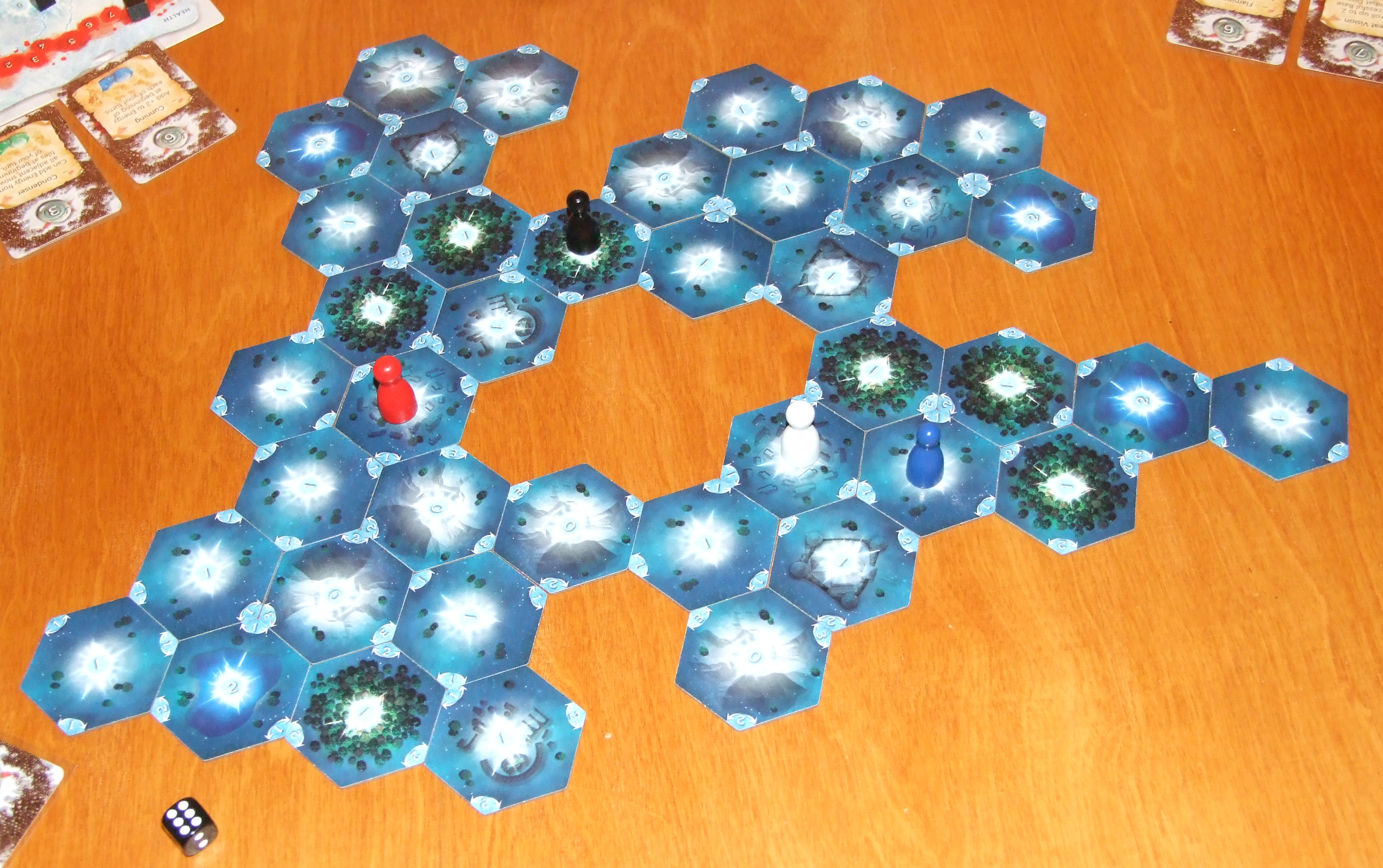 When playing a game that is sold as adventure type I always looks on level of immersion it gives. Ascended despite of really climactic intro in rulebook and mechanic conveying game theme, is not giving enough story you can get into. Yeah you are aware that you are some strange kind of sentinel, but in reality you have only stats sheet without any identity to it. Same thing with mutations, artifacts, villains and companions – you got only card name and how its work, no flavor text. And it’s a pity because if the game had more story and character, it would only benefit from it. 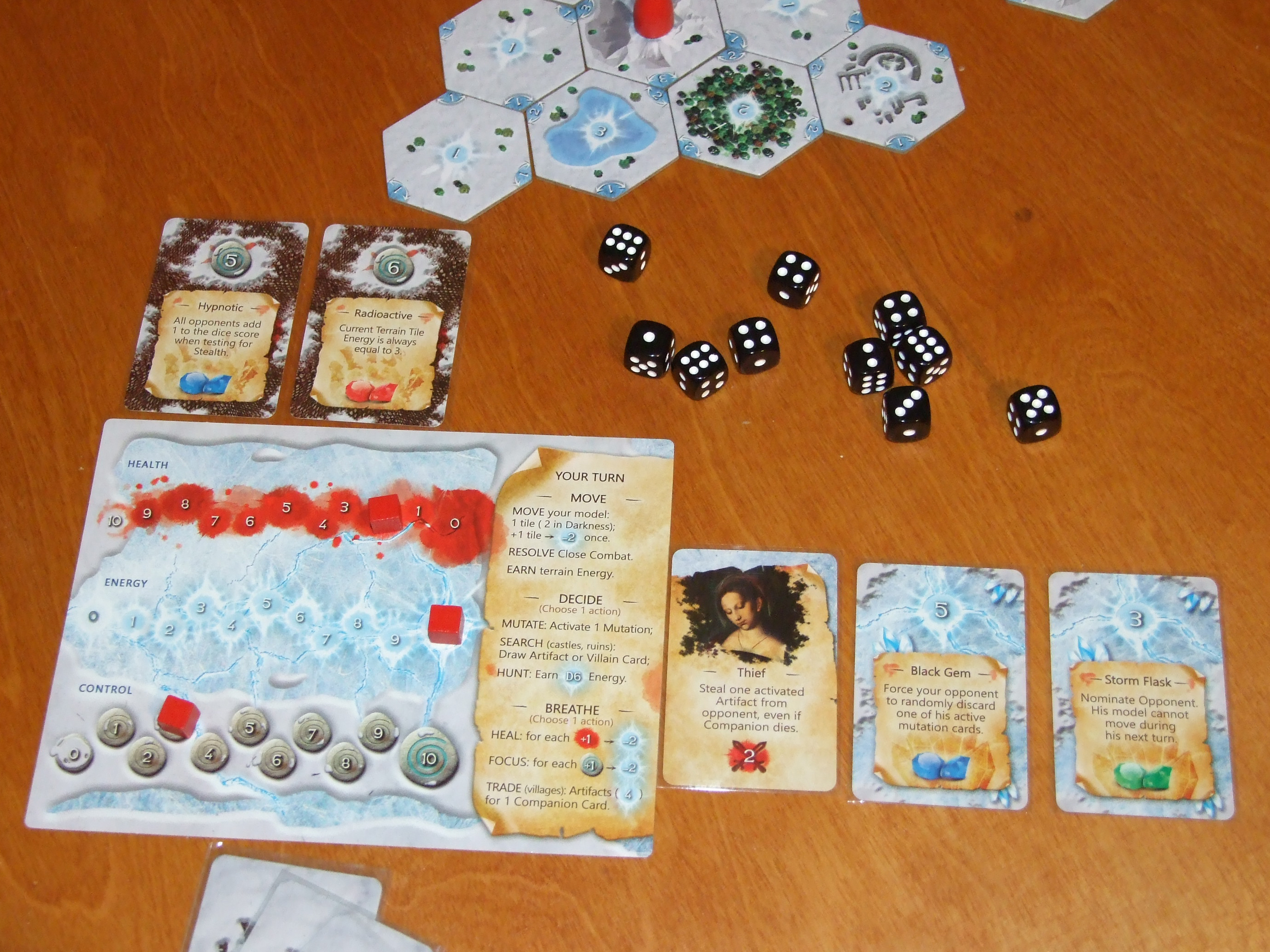 Ascended will replace games that I mentioned earlier (Runebound and Talisman) for me, mechanically this game’s got “legs” and it can walk far on them, if it’s developed in the right way. On their website and in game we are hinted that there will be some expansion sets. So even with all the flaws I pointed out, in a right mood this game will hit my table, but as for now I’m planning to play only in glow of a red moon. People who like this type of games, I advise to keep an eye on it and its potential expansions. I also trust the authors that they will avoid problems like with lack of components in upcoming reprints.