Summer’s in the air, people are having barbecues in bigger groups. It’s a sign that time has come for lighter games for larger playgroups, which means werewolf-like genre. In this case we will shoot each other  with awesome ray guns in social deduction game Leaders of Euphoria.

In October 2016, Overworld Games launched a project on the Kickstarter platform to fund Leaders of Euphoria: Choose a Better Oppressor. The campaign was successful on the first day, and in June this year the backers began to receive copies of the game. The game is also currently available for pre-order at the publisher’s website – overworldgames.com. Leaders of Euphoria is the result of the collaboration of Brian Henk and Clayton Skancke responsible for i.e. “Good Cop, Bad Cop” and Jamie Stegmaier – author of “Euphoria: Build a Better Dystopia”. Adrienne Ezell, Kristopher Hammes and Jacqui Davis worked on the graphic design. The game is a mix of previously mentioned two titles. We have here a refreshed and slightly modified mechanics of Good Cop, Bad Cop placed in the world of Euphoria. 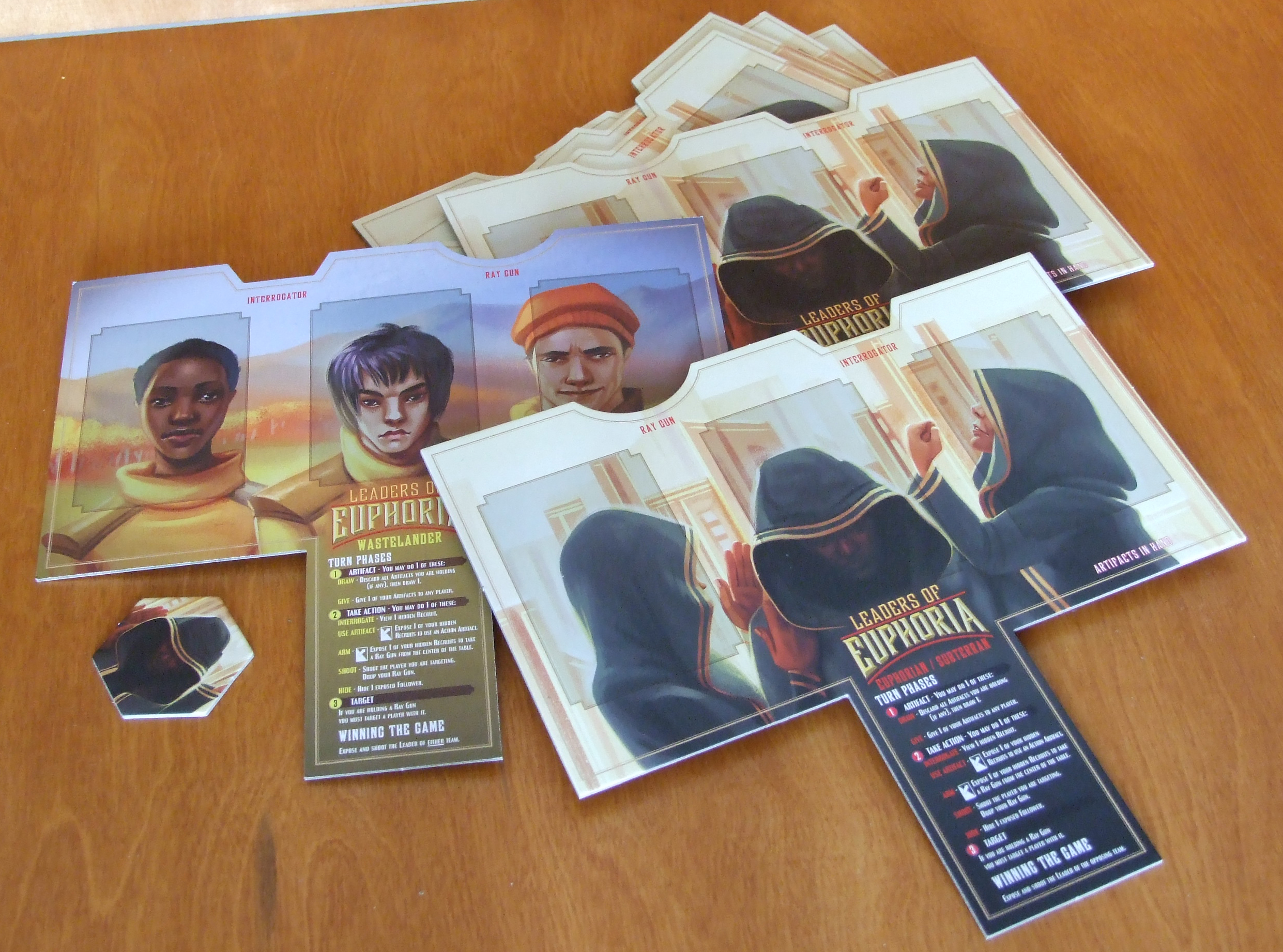 The copy I have received is a deluxe version of the game. In an extremely sturdy and bulky box we will find 8 player boards, 4 plastic ray guns, an active player marker, 24 recruit and 24 artifact cards. I also received a pack of 4 additional artifacts from campaign stretch goals. The game components look solid, the player boards and the active player token are made of thick cardboard, cards are standard quality. Each card, both the character and the artifact has a unique illustration. Artifacts are usually the worn-out remnants of the past civilization, which have been grandiloquently called by the modern – which adds some humor to the game. Double-sided player boards are a sort of tray, on which recruit cards will be placed. The most impressive components are painted in metallic Ray guns. With good quality and consistent graphic design, the components are inviting us to play the game. 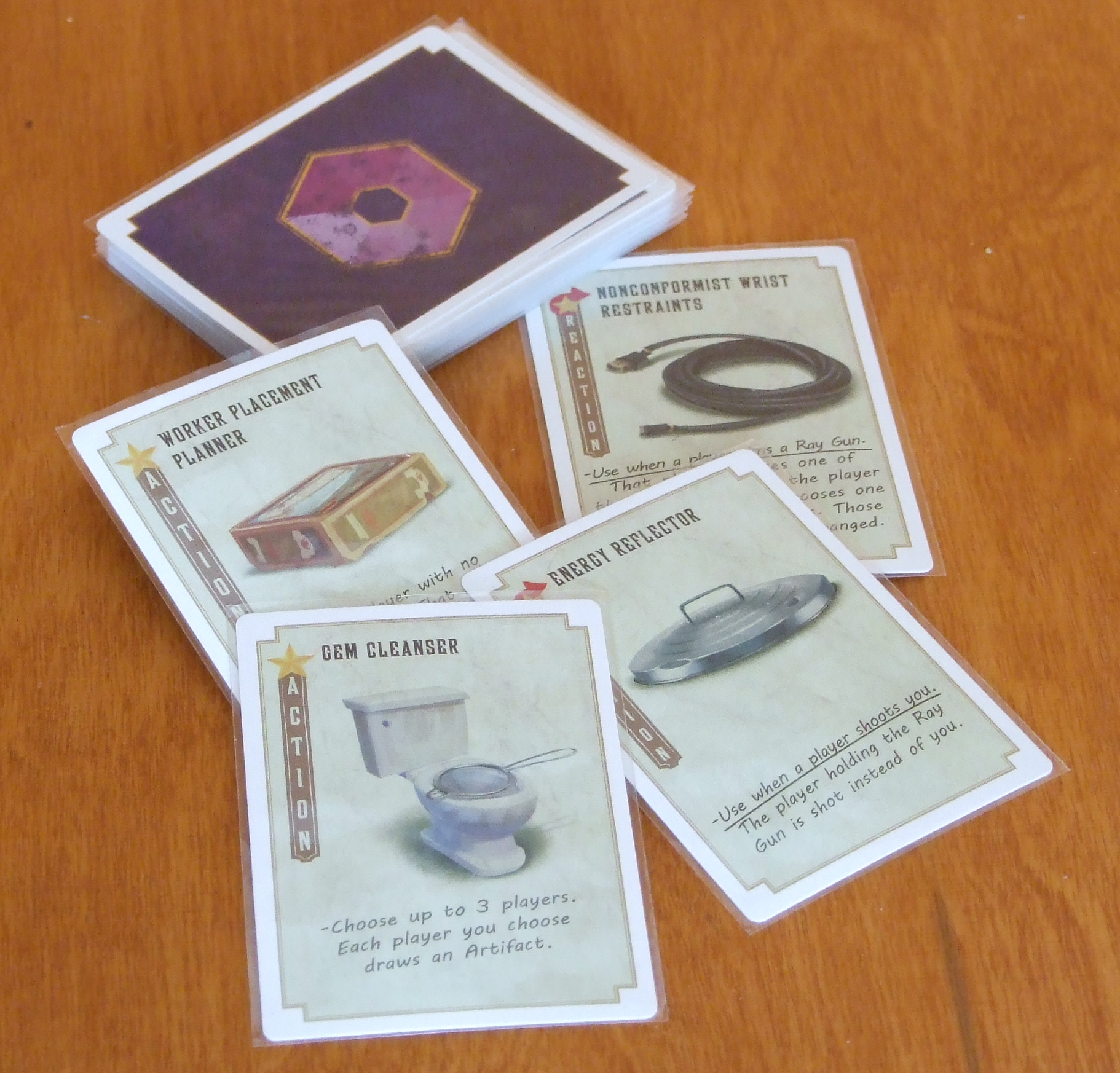 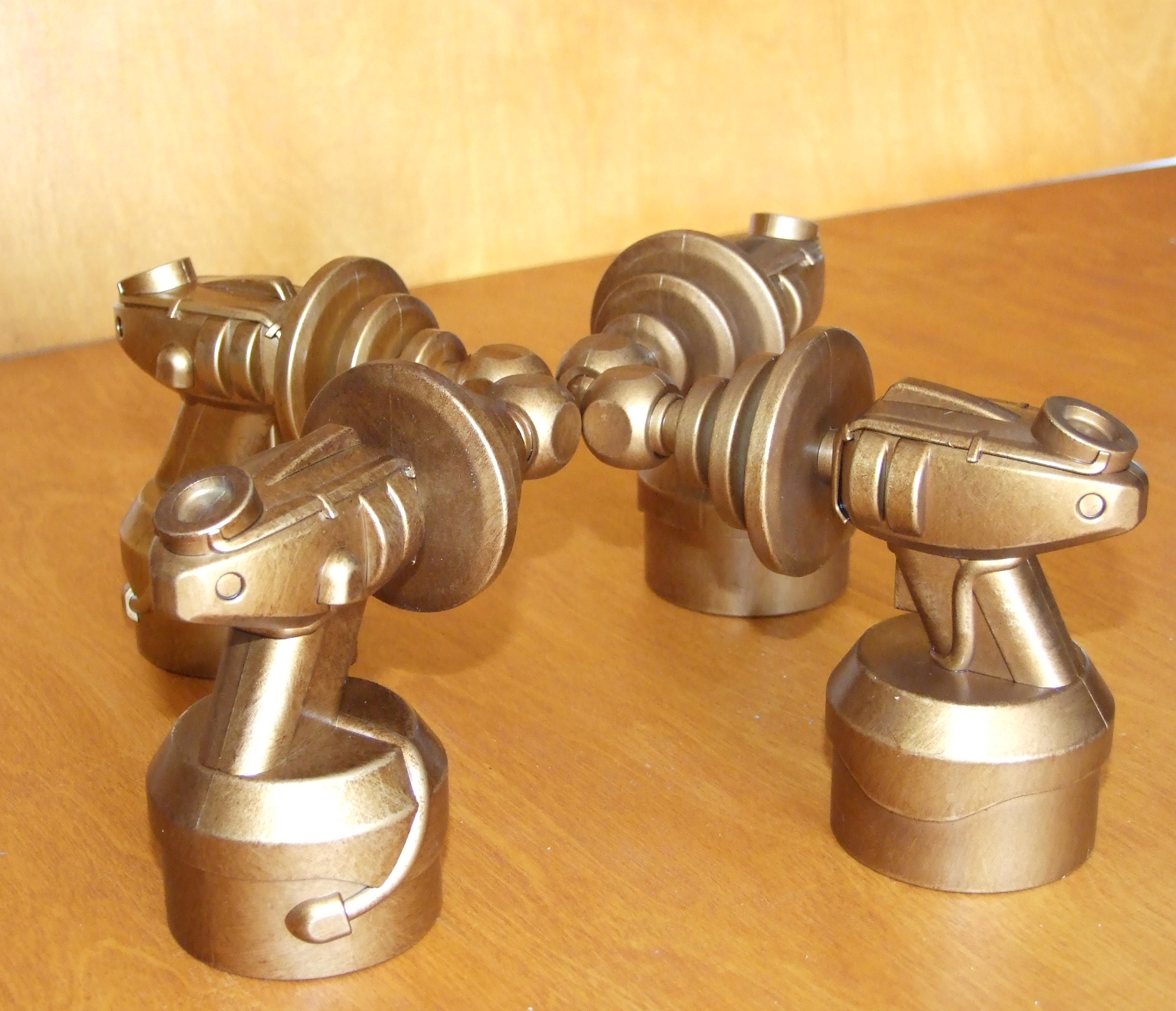 Euphoria is a dystopian city of the future, created on the ruins of an old civilization. Players found themselves at a time of crisis, when the behavioral control chips have stopped working and now people are divided. Hiding their affiliation and in paranoia looking for information who is who, this is their everyday life. In the newly formed city there is a political struggle between the two factions of Euphorian and Subterran, and somewhere beyond the horizon lurk the Wastelanders – a faction of unknown agenda. Your task is to kill the leader of the enemy faction.

Translating it into rules it looks like this – every player receives 3 recruit cards, those cards will determine in which faction we will be – red (Euphorian) or blue (Subterran). Among all recruit cards 2 leader cards will be hidden. The task is to find the rest of your team, defend your leader and shoot the leader of the opposing team. In turn, player will have 3 phases, each of them can be skipped. In the first phase, you may discard your artifact cards and pick a new one, or give one previously owned to someone else. In the second, you can interrogate another player – watching one of his recruit cards. Play an artifact card, arm yourself with a ray gun and aim it at the chosen player, shoot from a previously held and aimed ray gun, or hide one of your non-leader recruits. Playing artifacts or arming yourself will require you to also reveal one of your hidden recruits. In the third phase you can change the previously chosen target for your ray gun. If we shoot a player with a leader card, he must reveal it. Only shooting revealed leader causes him to die and brings victory to the shooting team. But you have to be careful, shooting a player who has no leader card among the recruits, causes him to join the Wastelander faction – which is created in this way in course of play. The goal of a player who becomes this faction and other players who may later join it, is to kill any of the leaders. If a player is in possession of both leader cards, he immediately wins alone. If a player who became Wastelander ever gets a leader card, he also wins the game alone immediately. This can only happen as a result of few artifacts and it’s extremely rare – for all the plays, and I’ve had quite a few, it only happened twice. 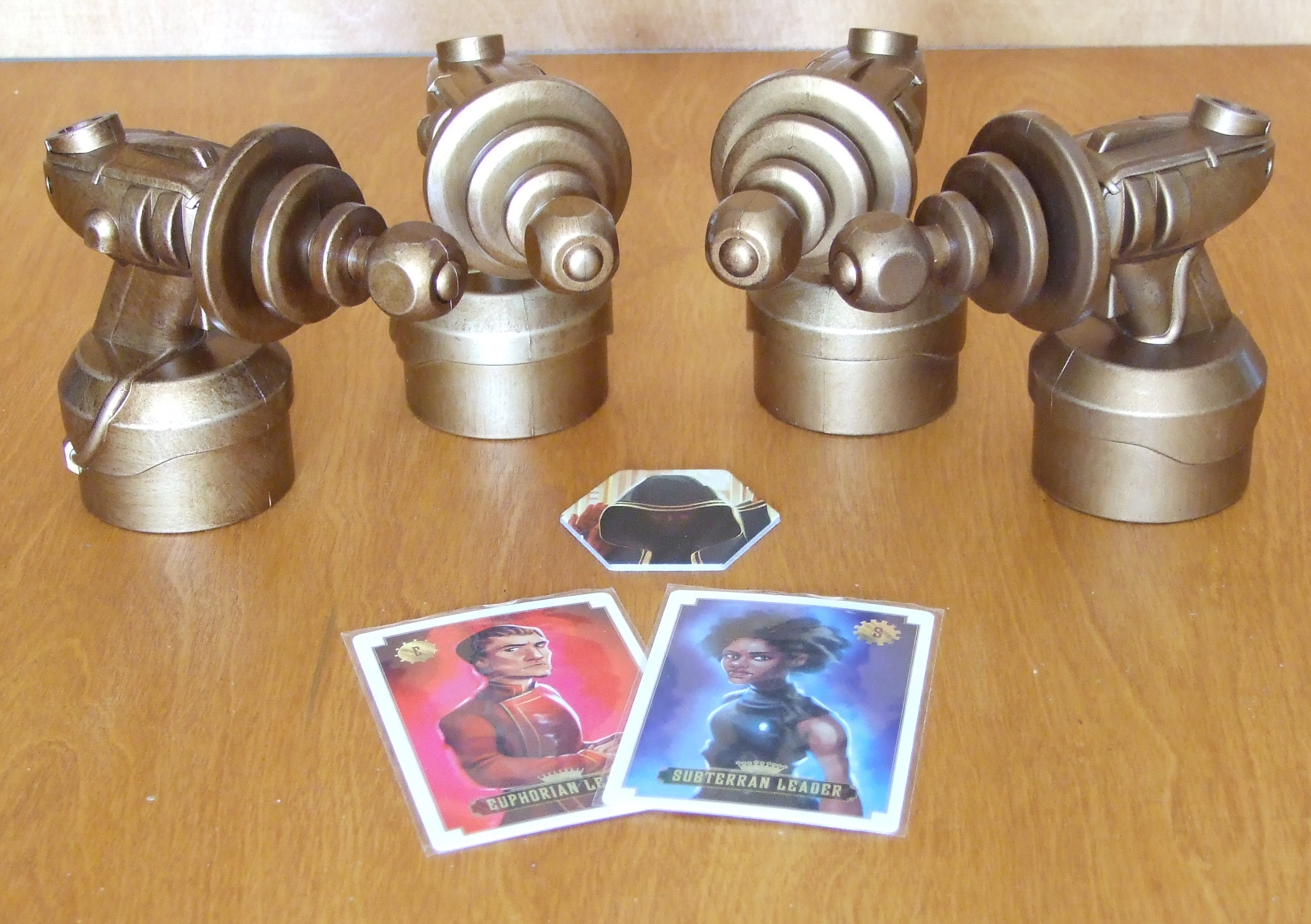 Leaders of Euphoria: Choose a Better Oppressor  is a simple game with a very interesting gameplay dynamics. From 4 to 8 players, one game will take a maximum of half an hour, while the shortest time we were able to play was about 5 minutes. The mechanics of the game force you to search for your allies. Interesting thing is that you will often find allies on the other side of the fence. It often occurred to our team that the Subterran team had defended the Euforian leader from being shot by the Wastelanders. There were games in which such a lonely leader effectively could play the other players and win it. Game is also cranked up by things like, for instance, when you force the exchange of recruits between two players, and it ends on giving all the power to one person, and all we wanted was just to save our leader. Thanks to the ability to transfer cards and diversity in artifacts, we are forced to build trust between the players – some of them can only save us when someone else plays them on us. The ability to reveal only up to 3 recruits forces us to strategically count the number of cards and actions we can take. Each artifact has a big impact on the game, but each one is situational. The dynamic appearance of the third faction and the lack of elimination of players from the game involve everyone to focus on play up until the very end. Thanks to these elements and several end-game options, each gameplay seems to be unique. 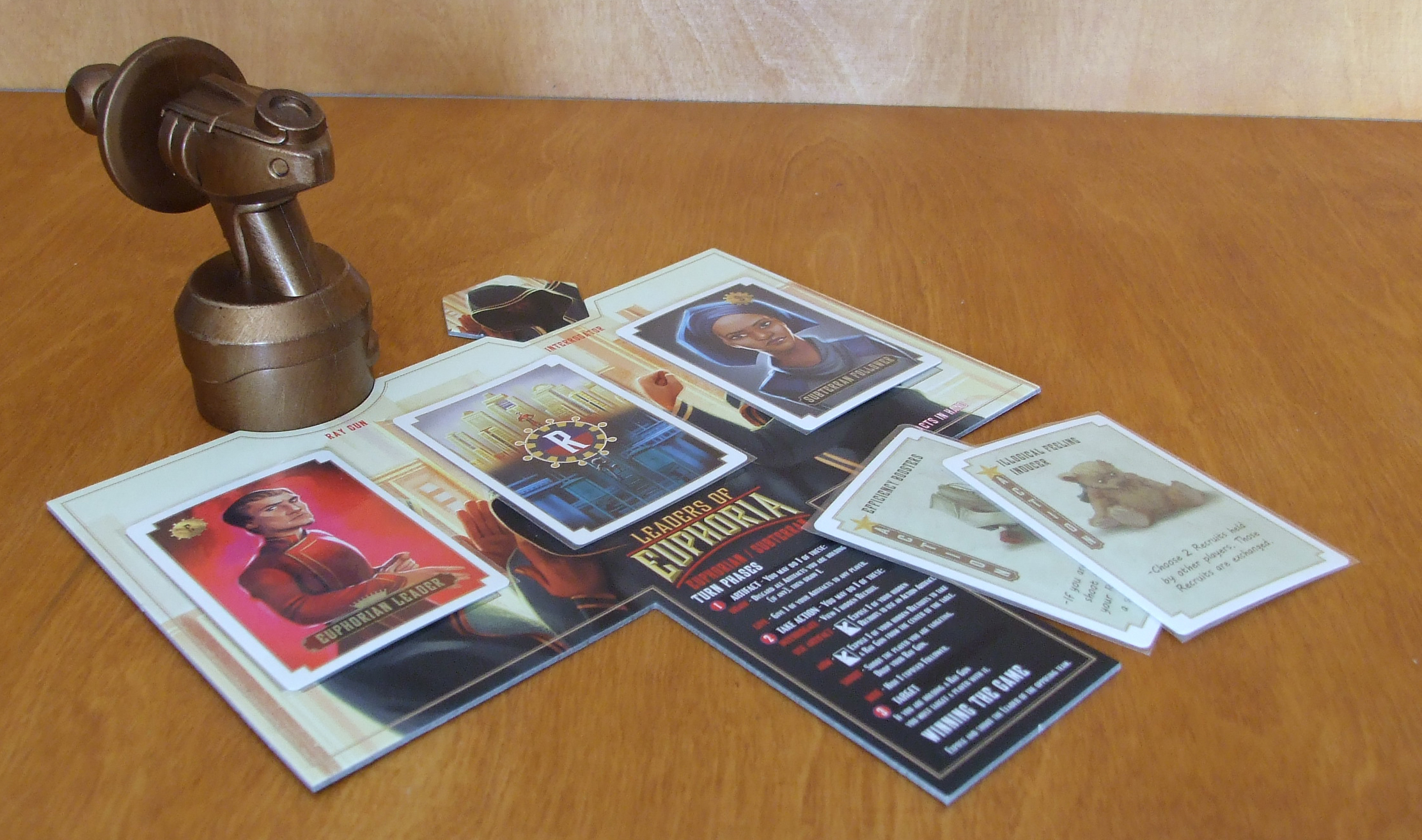 If you are an enthusiast of this type of game, Leaders of Euphoria is the title for you. We even started to add sound effects from the Pew Pew application when shooting someone with ray guns. The game encourages you to run it again right after one another, to try to bring the victory to your faction.