After the warmth of the season, Ascended enters the stage again, along with winter scenery and mutants fighting each other. This time I will present you the second edition of this adventure game, which really surprised me.

David Costa (one year after his debut in boardgaming industry) took into account the players’ suggestions and developed a number of changes to the game. The project is complemented with additional components and released by Saved Game as a complete new edition and a update pack for the first edition, for people who already own the game. Both the first and the second option can be purchased from the manufacturer’s website at www.playascended.com. 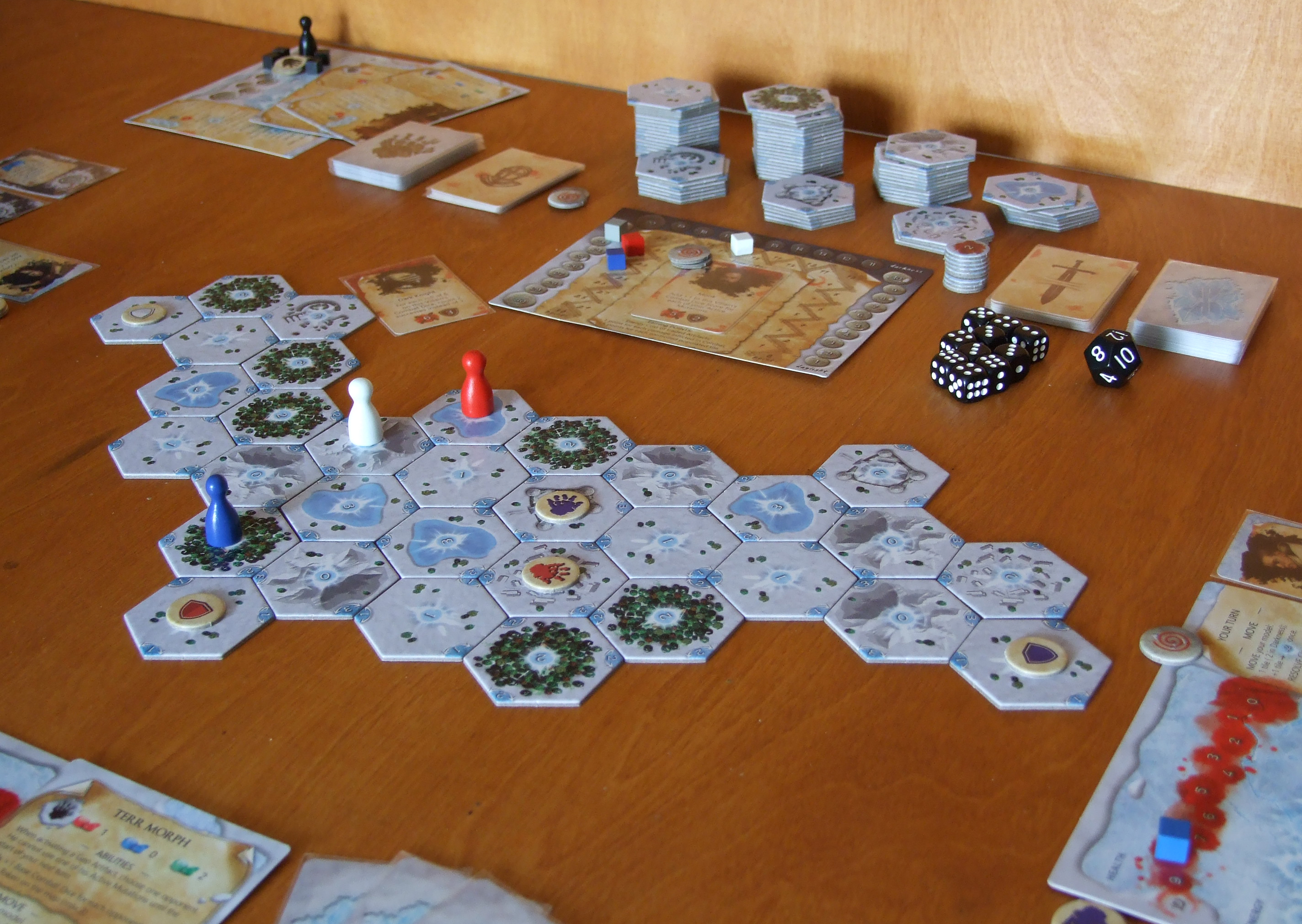 The elements are exactly the same quality as in the first edition – solid and consistent – 100 hexagonal terrain tiles made of thick cardboard, 4 card decks (artifacts, mutations, villains, companions), ten 6 sided dice and one twelve sided die, player sheets and wooden set of markers with a pawn, for every player. The expansion gives us 5 bigger sheets, and among them 4 creatures that we will become during the game, and the game dashboard. On it we will be able to mark the current turn, the victory points of each player and the active Inquisitor. Next are wooden markers for this dashboard and 28 tokens (wounds, superstitions, power and origin). The dashboard and character sheets are made of rigid cardboard, while the tokens are coated, made of thick cardboard. Andrea Alemanno is the author of  fantastic illustrations for the four awakened characters. 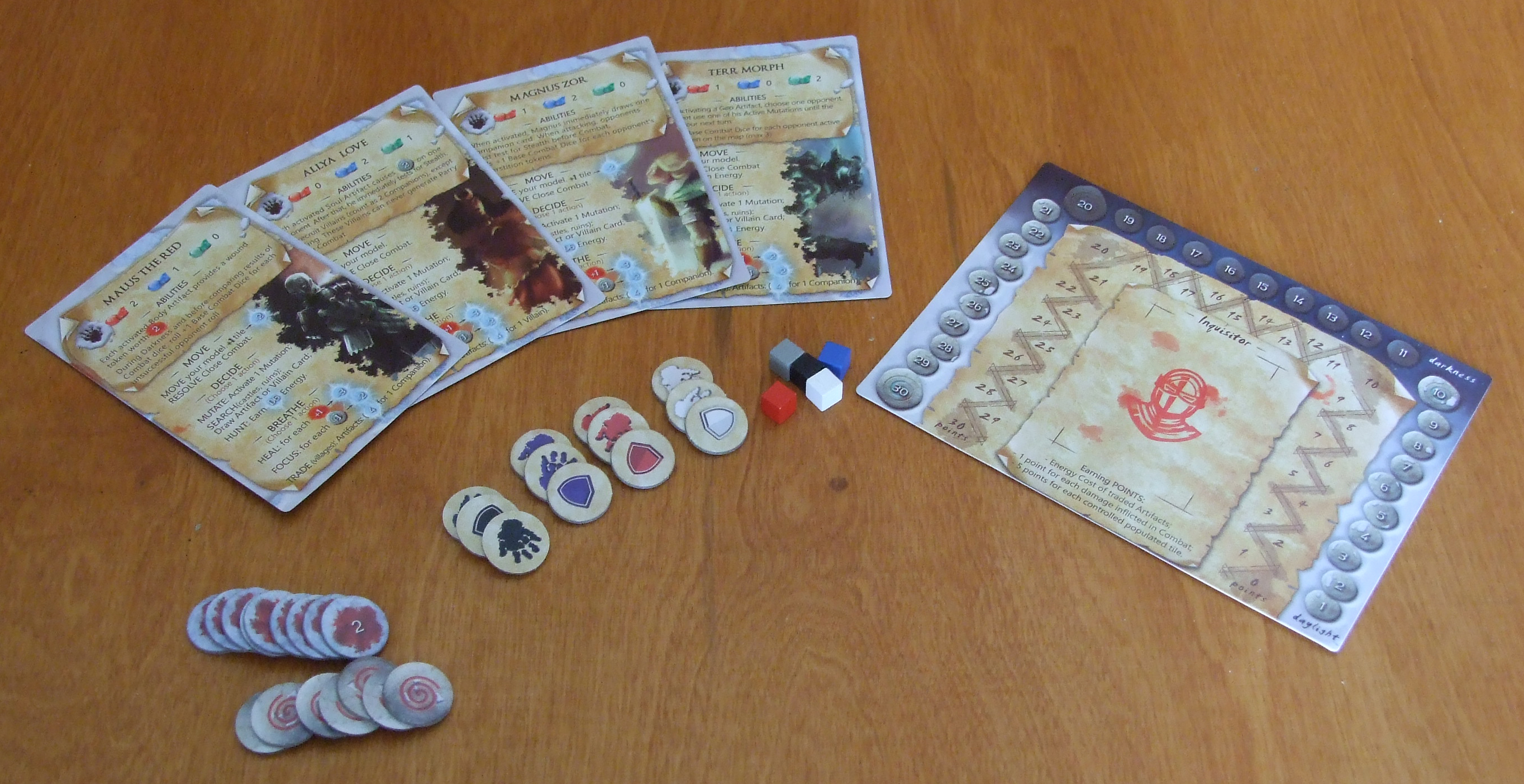 In the snowy depths the fairy-looking characters wake up. Ascended is an adventure game, in which we need to get to know our surroundings and try to control it, evolve ourselves and fight the other players. In this edition, the game offers two game modes. The first one – in which we play solo, the inquisitor and the hunters want to prevent us from gaining power. Second – multiplayer – for two to four players, in which we compete with the other players for whoever gains at least 30 victory points, becomes one of the four characters and returns to their starting position, or has the most points at the end of the 30 rounds. It will not be easy, as every time the players visit some inhabited areas (as mutants) they try to stay in the shadows, and the inquisitor just waits to start the witch hunt. 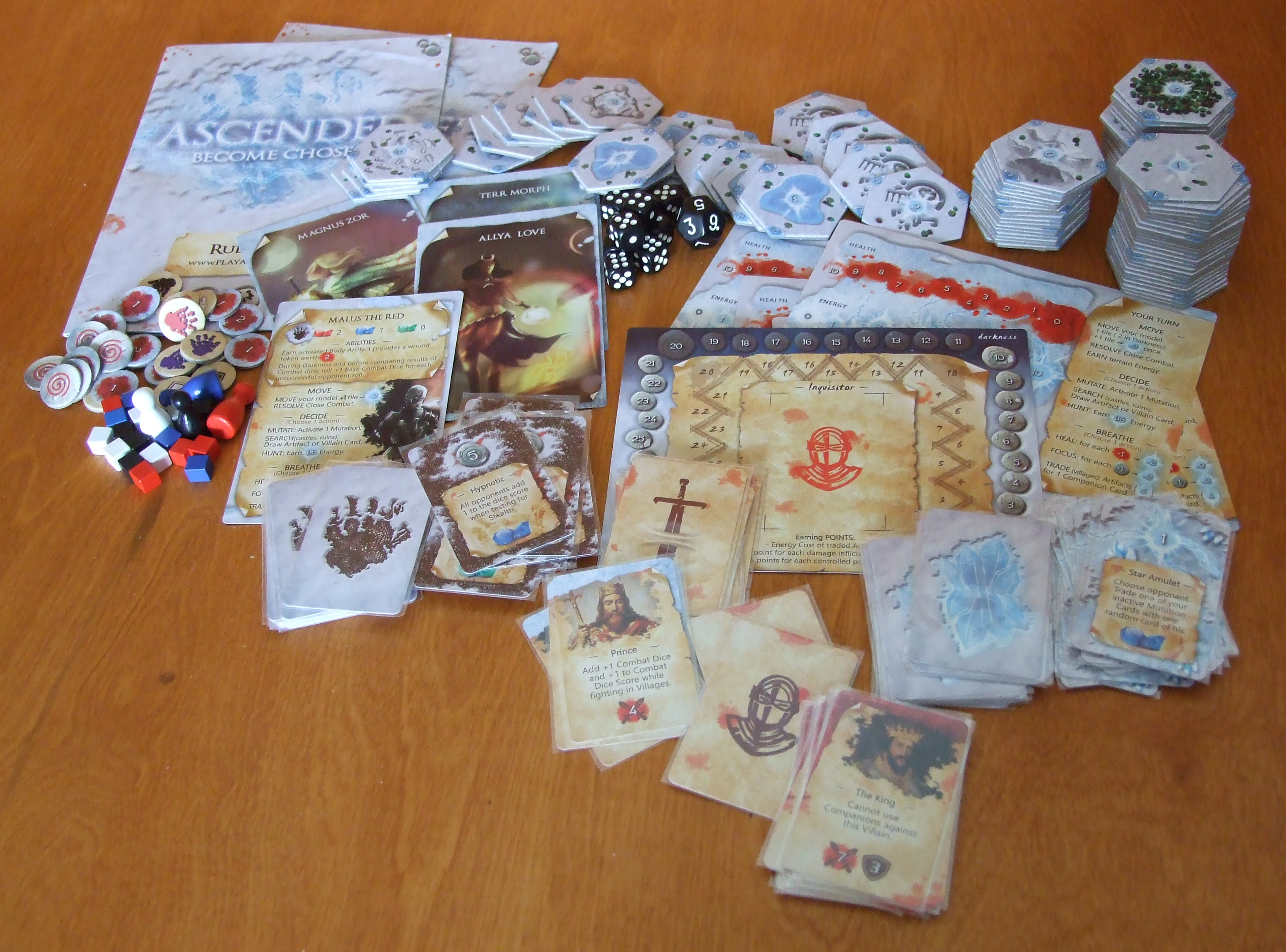 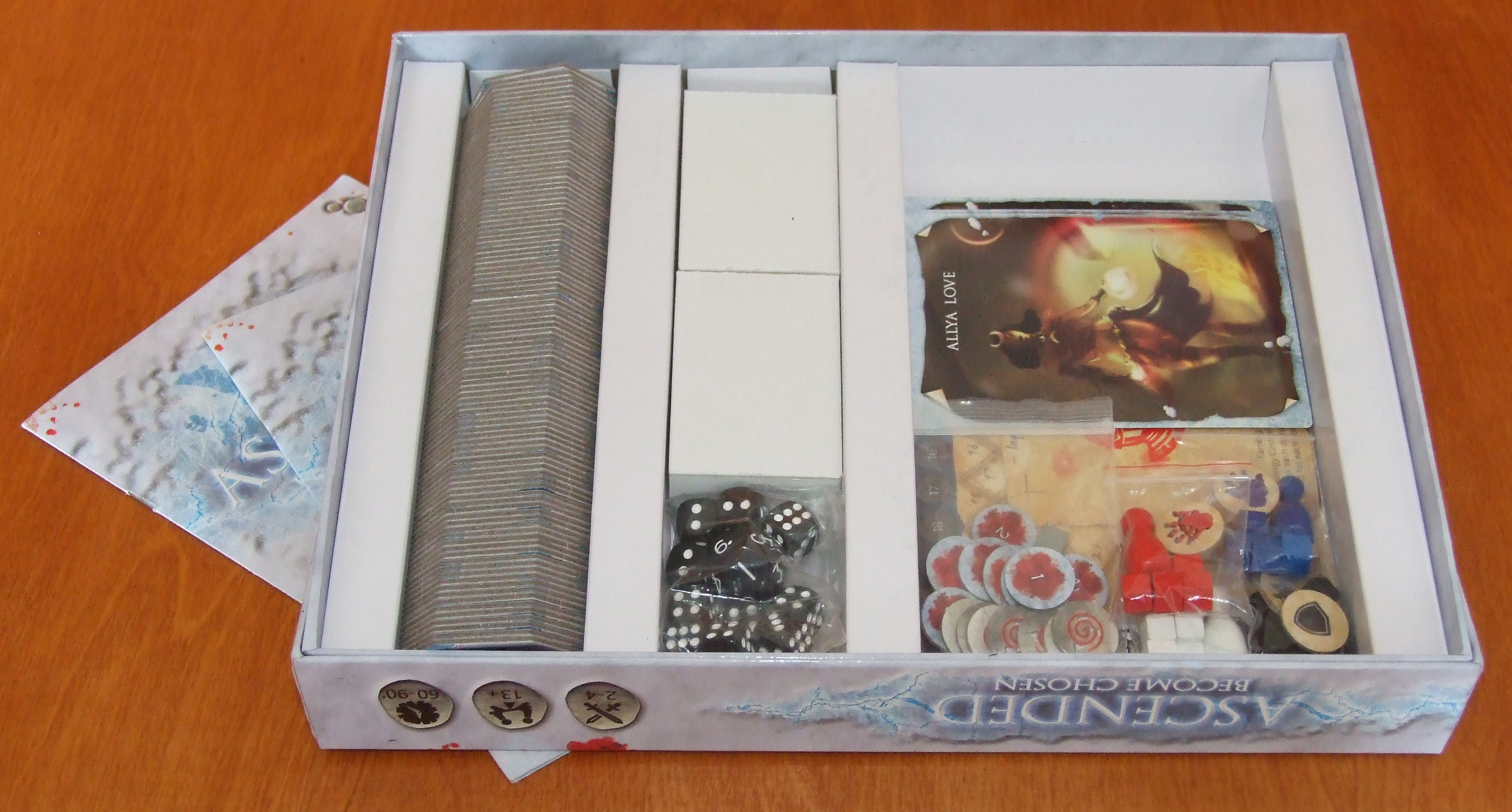 Let’s create a map that we will travel around. Tiles from which we create it, are randomly chosen by roll of 12 sided die, or can be selected by spending two points of control. We can consciously influence the appearance of the environment we are in, when preparing for an encounter with the enemy, since each hex of the map contains information about how many points of energy we will receive, and what is the modifier it will give us when fighting. For the first 10 rounds, everyone creates his own map, making it with “daylight” side of tiles. In 11th round, each map is joined together by the player who has the highest level of Control and changed to its “darkness” side. Map switches every 10 rounds. 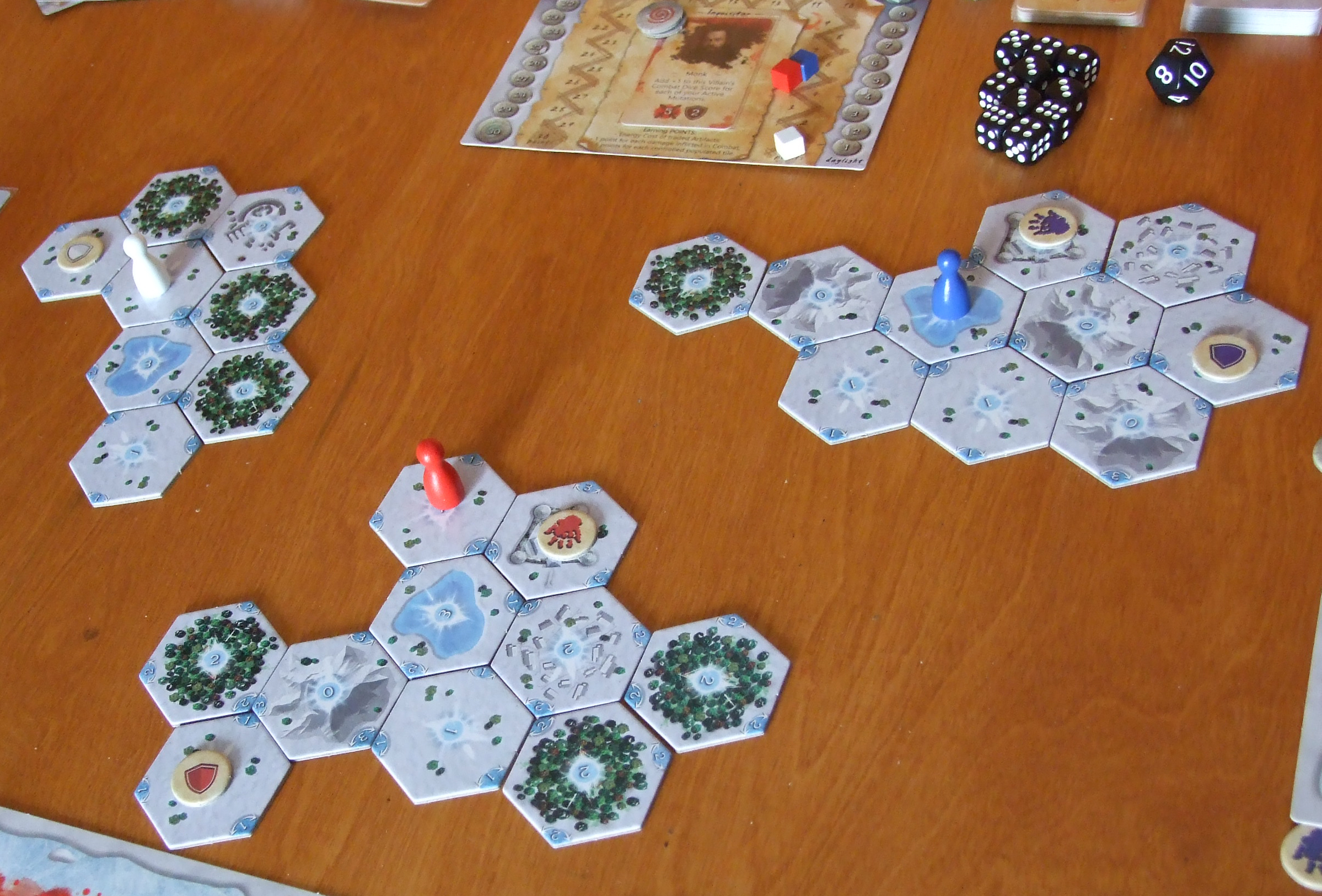 In the round, each player has his turn, which has 3 phases:

Since the first darkness appears, we can take the personality of one of the four characters presented by the second edition. Who we will be is determined by how we mutated. Once adopted, the personality can’t be changed and will stay with us until the end of the game, determining the type of mutation cards we can have, slightly changing the 3 basic phases of our turn and adding some unique skills we can use.

Until the maps are connected, the game is symmetrical, and after first Darkness occurs, it gives everyone possibility to decide whether and when to go into asymmetrical mode. We use dice for the combat, which adds randomness, but we can control its level. This is given to us by opportunity to build our dice pool with the proper mutation cards, and to divide it into attack and defense pool by usage of control points. Similarly, where we fight and what modifiers we have, allows us to control the situation, to a certain extent. By taking appropriate action in the decision phase, we can prepare a set of mutations that we will play later. Everyone can also spend some time gathering allies that will also affect the battle.

The main goal of the game is to fight with the bad guys and the other players. Mechanics provoke a negative interaction, rewarding in the victory points for each point of damage dealt. We can take control over the castles and ruins where we fight with the villains, and thus gain the next victory points. When one player starts to dominate with points, the others automatically go into the hunting mode, where they temporarily make shaky alliances just to lock him somewhere on the map or his starting point, which he must reach to win the game. 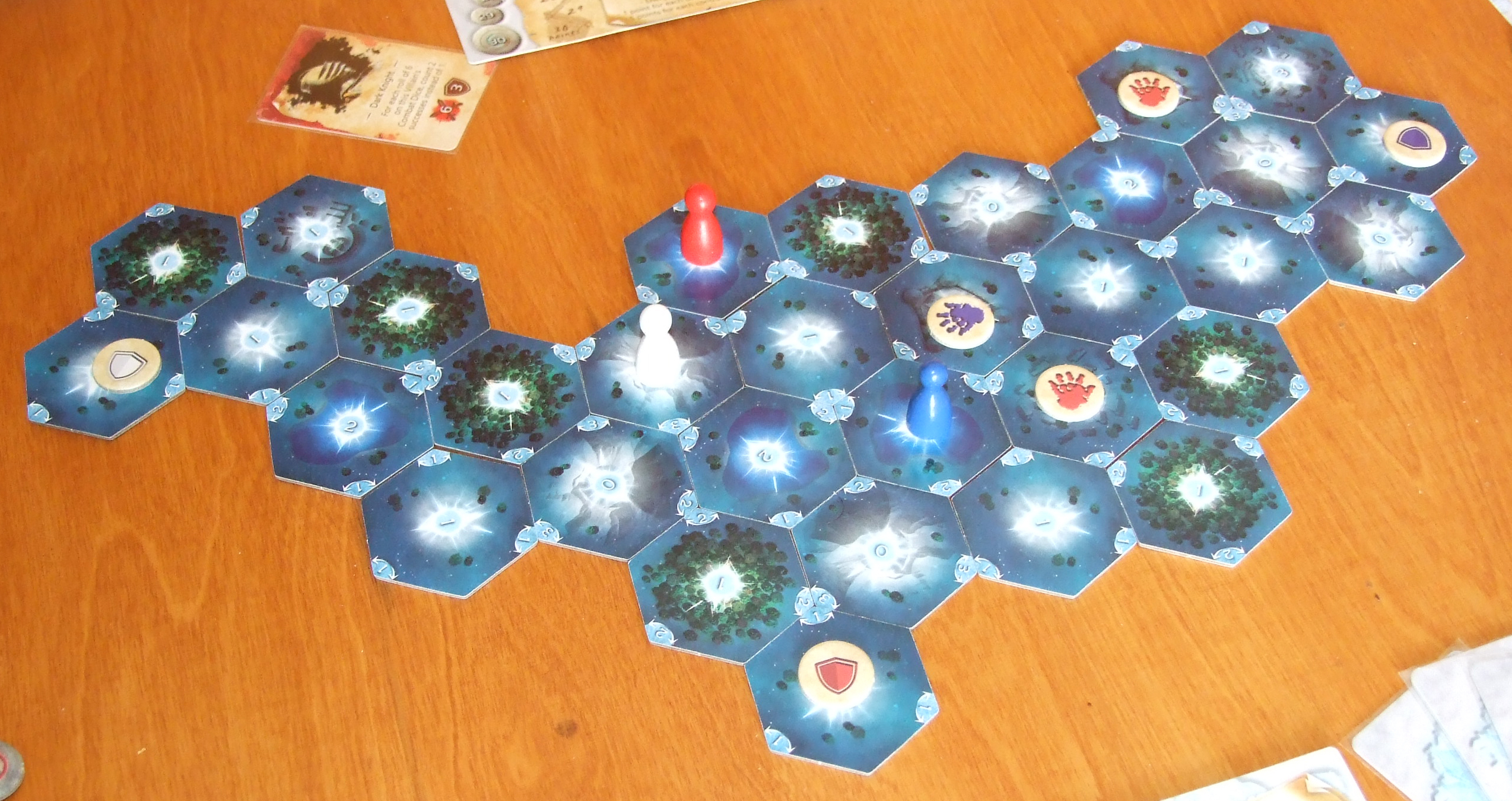 Turns in Ascended run very fast. It’s true, that with the number of possible decisions you can see some time passing while waiting for your turn, but its mechanics work so smoothly, that it is not felt at all. In a four player group the game lasts for about two hours. 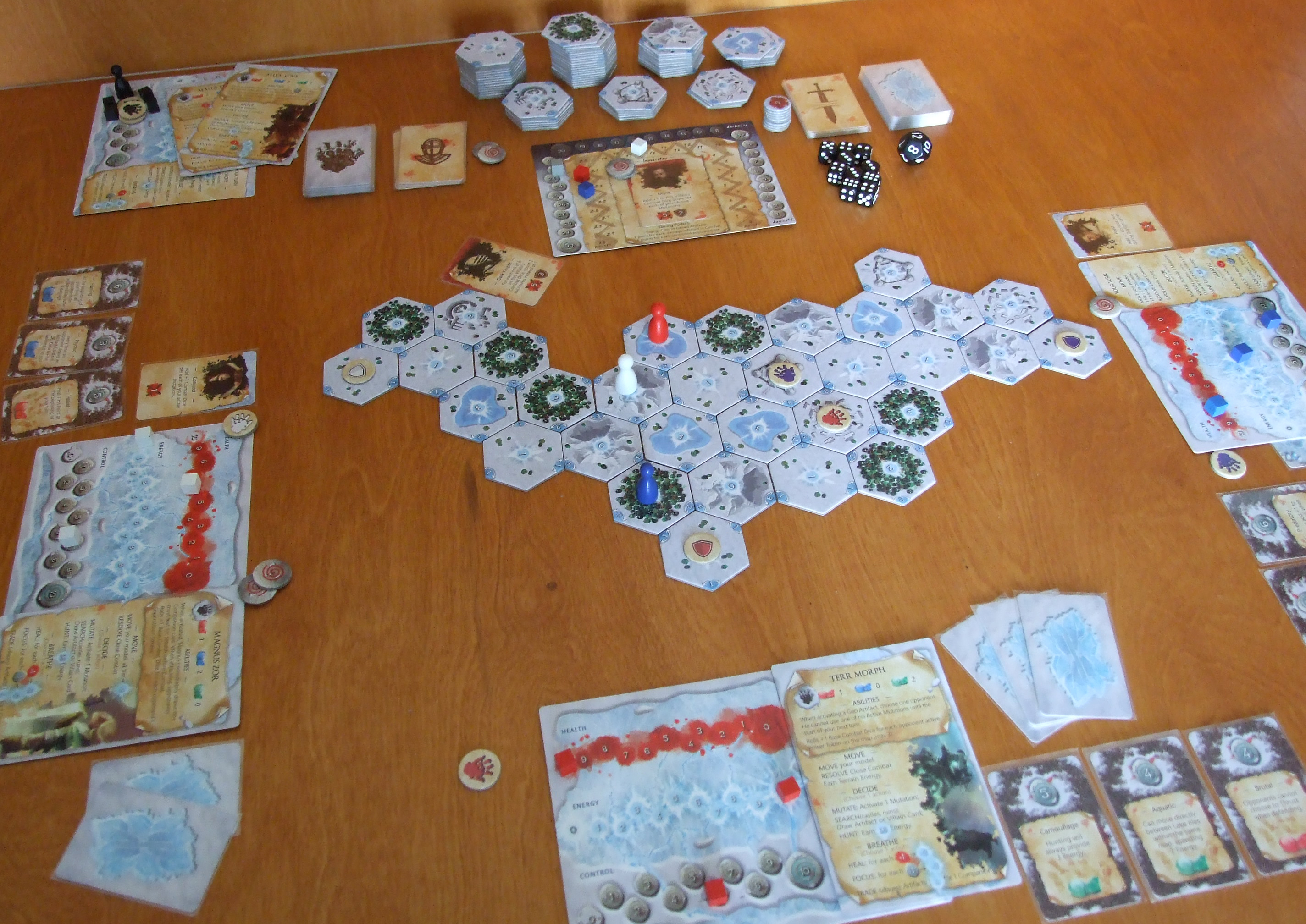 Immersion level compared to the first edition increased. Climatic entry into the game, the identity we gain during the game, the story of our character and the mechanisms that make sense of our actions in the game. Importance of continuous fighting and keeping control of what is happening also draws us into the game. I miss some kind of a description on the cards of artifacts, mutants, villains, or allies that could enrich the gameplay. However, in this edition I would treat it as just an extra flavor, not a main tool of the world immersion.

Finally, I will explain what surprised me in the second edition of Ascended. Namely, with a few changes of mechanics and minor refilling of components, I received practically an entirely different game. Nothing that worked well in the first edition was ruined, and the changes brought freshness. I felt like it was a new game. Of course, this update can be considered as another variant to play with the three known in the first edition.

In my opinion, the game has gained and developed in a very positive direction, exploiting the potential that lies in it. I can honestly recommend this journey to discover yourself, while taking control over the surrounding world. I will continue to follow this game, hoping for expansions, because with the second edition I want more and more of it. If you would like to have a full picture of how the first edition looks, I would also recommend you to read the review of its first release.