Among Us – My first thoughts, after reading a few words about what we get in this game, immediately threw me into the sf classics like “Invasion of the Body Snatchers” from 1978, or a wave of movies from the fifties, about flying saucers that want to dominate the Earth.

The game was published by uplay.it edizioni in 2018. It is the debut of the creators Giampaolo Grieco and Pierluigi Taddei. The graphic design was taken up by Arianna Santini, whose works can be seen in Creepy Falls, and Mirco Paganessi, who worked on graphics for i.e.The Princes of Florence. 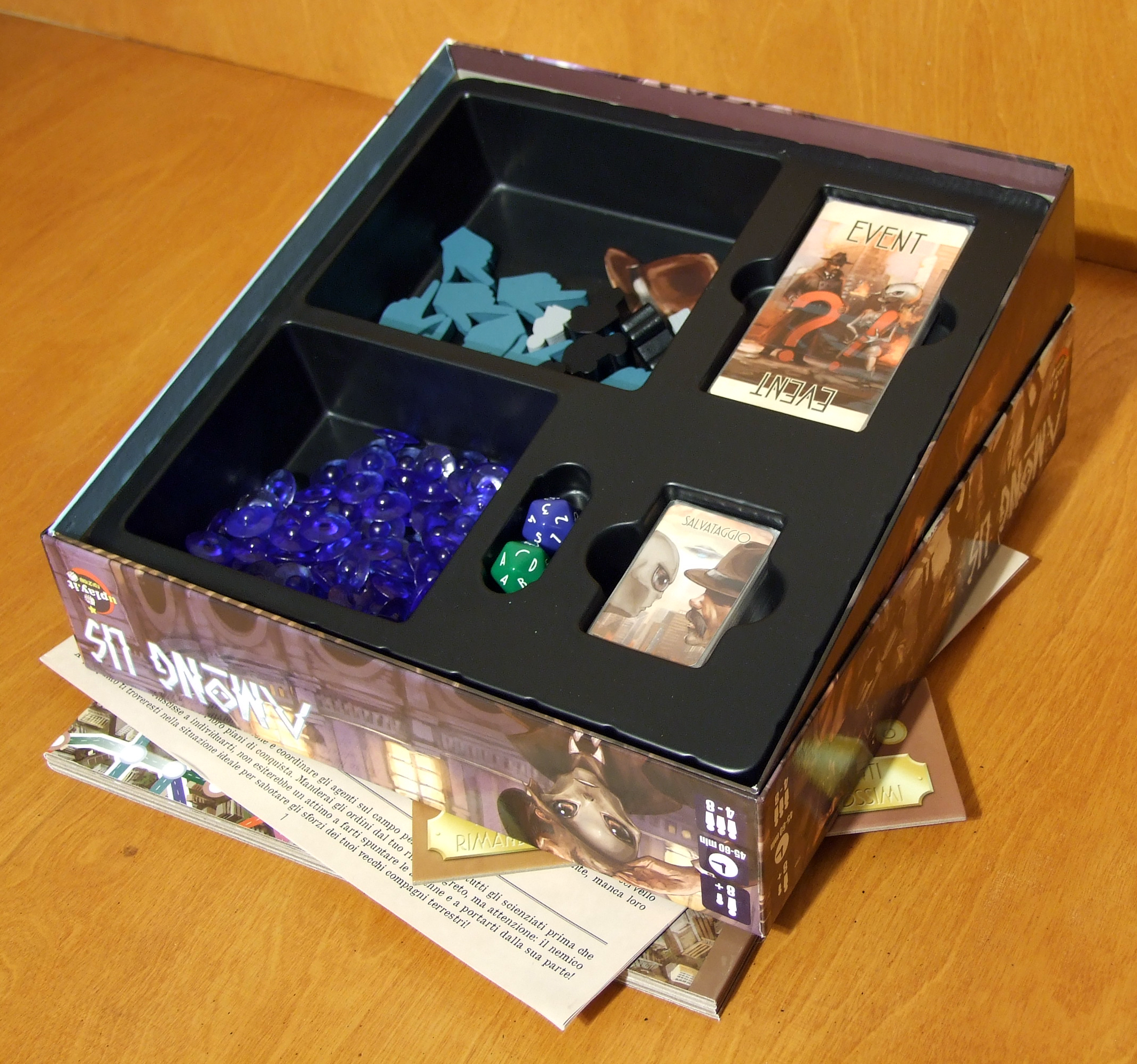 A glossy, varnished box of standard size with an atmospheric illustration, contains a functional plastic insert for components. Among the components are decks (events, assimilation and voting), a bag full of small plastic flying saucers, two 20-sided dice to determine where UFOs land, wooden accusation, strategic pressure, scientists and agents markers. We also have a cardboard first player token, a mini board with a strategic pressure track and a double-sided (60 cm x 60 cm), glossy varnished game board of a city (Washington and Milan). Quality of the components is very good. Varnish used on the board effectively protects it against any accidents related to soda-flooding. This has its downside, because it strongly reflects the light and makes it difficult to see what is on the map. The illustration of cities is pleasing to the eye and not distracting. However, the grid of streets and points where we will place our pieces can be illegible. On the Milan side, in the evacuation points, a highlight gradient has been added, which overlaps the street graphics, changing their color slightly on this section, which was misleading to people, who played for the first time (we are moving agents along a street of one color). There is no such problem on the Washington side. On both sides there are places, where accumulation of points is so dense, that it is hard to notice, whether the agent is standing in one area with the scientist, or next to it, it is possible that spreading this grid on a larger board (eg 60 cm x 90 cm) could have solved this. The illustrations on the cards are great, they correspond with the theme of the game, and the layout of the cards is clear and consistent, slightly imitating headlines from the first pages of newspapers. 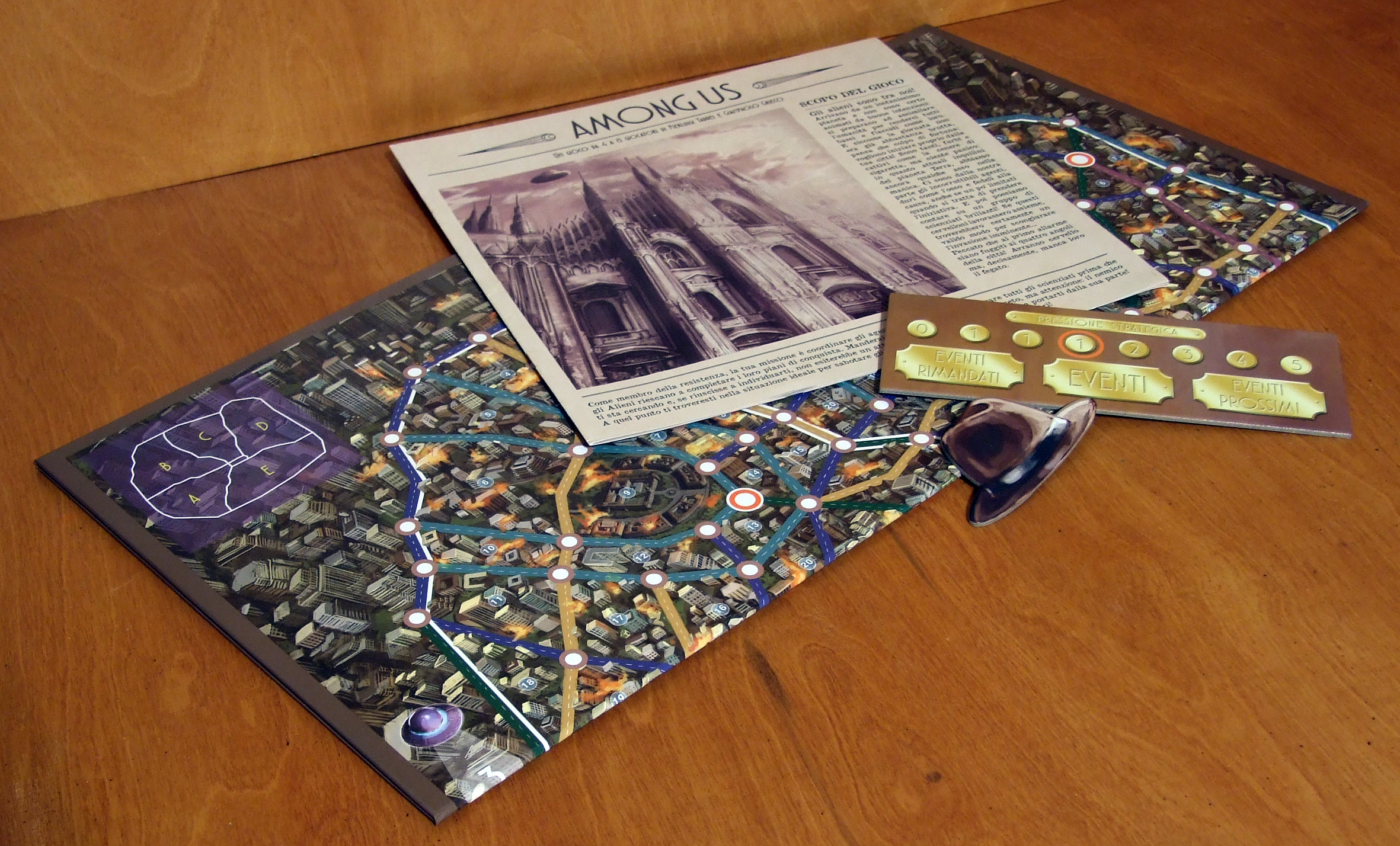 We are in the role of coordinators of secret service agency, that tries to stop an invasion from outer space. Our main goal is to evacuate the scientists working on solving the UFO problem from the city, at same time not allowing a complete takeover of the city. With each second, more and more saucers are landing, leading an effective extermination of the civilian population, heralding the arrival of “mother ships”. Each time sending orders to our agents in field, we risks our hideout being exposed, and the Body Snatchers put an impostor in our place, who will mess up our agency’s actions from inside. Theme of the game fits like a glove with its mechanics, keeping the sense of the actions carried out, where large part of the game is placed in conversations over the table between the players, optimizing the path of transport to the evacuation site, or accusing one another of being an alien in disguise. 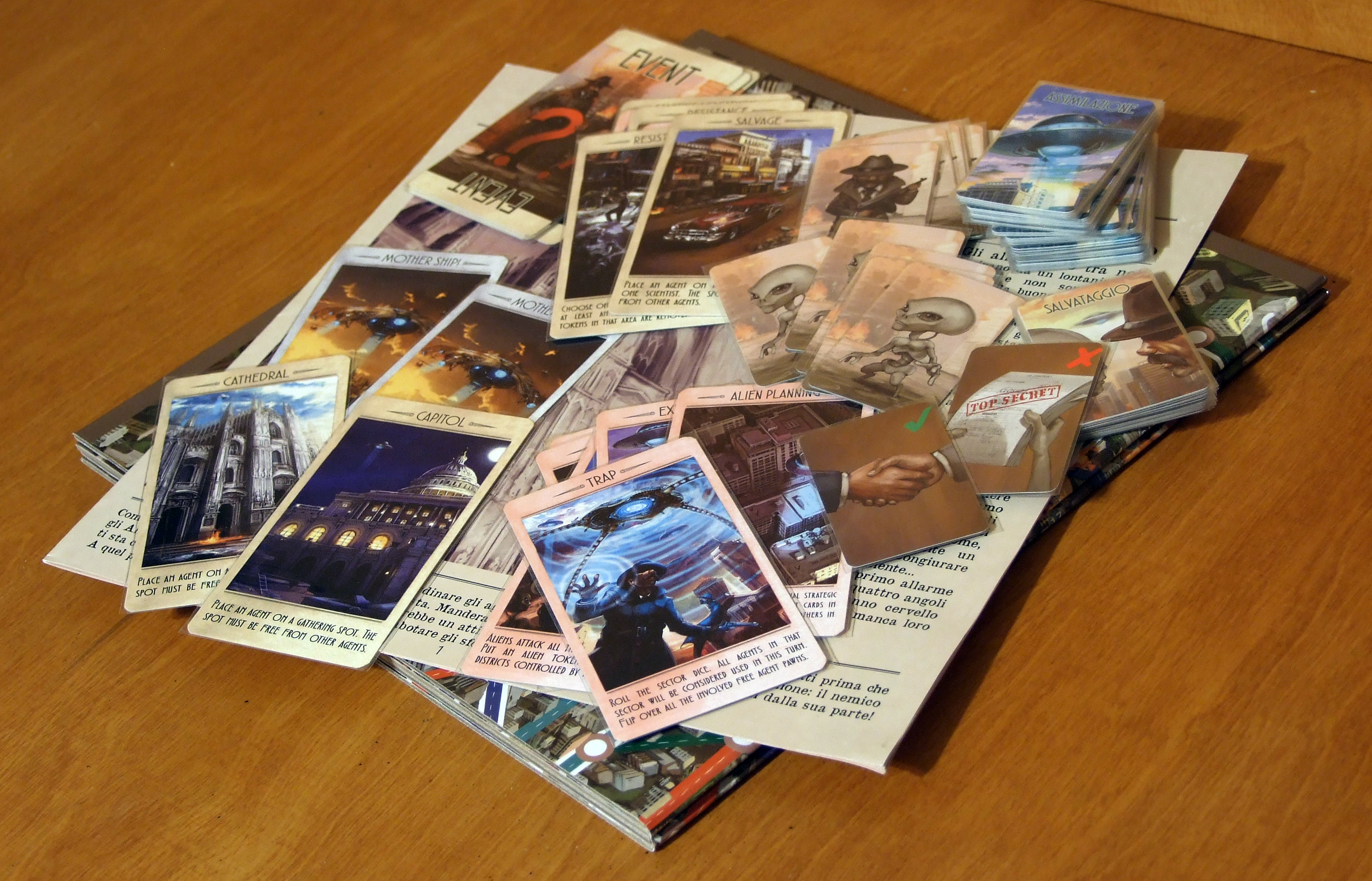 Mechanically, the game is a simple balancing of the profitability of actions and deduction. At the start of the turn, the current first player resolves the event card. These cards are interestingly designed, because in principle both the “bad” (red) and “good” (yellow) cards can be resolved so as to harm / help in the current situation, decision depends only on the first player. In the deck there are also cards of “Mother Ships”, which, if they come out in the event phase, bring us closer to losing – the fourth Mother Ship ends the game. After that, each player starting from the first will have one action in his round and the turn will end with a landing at a random location on the map of new ships and preparation of a series of events for next turn. On the list of actions, from which the player can choose, one is management of the event deck, where you are choosing between two cards, discarding one event and adding the second one to the stack of cards “for the next turn”. Next one is option to persuade at least one other player to risk accusing someone suspected of being an alien, if after revealing of the assimilation cards the accused player turns out to be a human – the accuser and his helpers lose the right to further accusation, in second case, the exposed player begins to play openly as an alien. Finally, we have management of agents in the field. When we choose this action, we pick one agent on the board and decide what we’ll do with him. The option here is to move this agent along the streets grid, exterminate the UFOs that surrounds him, escort the scientist (fondly called by my fellow agents “kick”) or evacuating the scientist from the board. During the evacuation, the player controlling the agent selects two more players and conducts a secret vote whether the evacuation was successful. If there was an impostor among the voters, the next 4 event cards from the deck should be resolved immediately. If we carry out five evacuations before 4th Mother Ship appears, people win. As for the escort, we refer to it as a “kick”, because in reality it looks like an agent from one point is kicking a scientist like a ball to another agent. If there are some flying saucers along the route of the escorted scientist, unfortunately our ball will not fly. And this is the essence of Among Us, as a team, plan the route of passes between the agents, so that scientists end up at the evacuation point. The threat to the plan are assimilation cards, drawn each time we activate the agent on the board – if at least one is alien, we change the side of the conflict. In the game, you can also play as a revealed alien, on your turn you can manage the event deck or land new ships on the board making it difficult for people to play. Playing on the alien side gives you one more way to win. If landing saucers fill up one entire sector of the board, the invaders win. 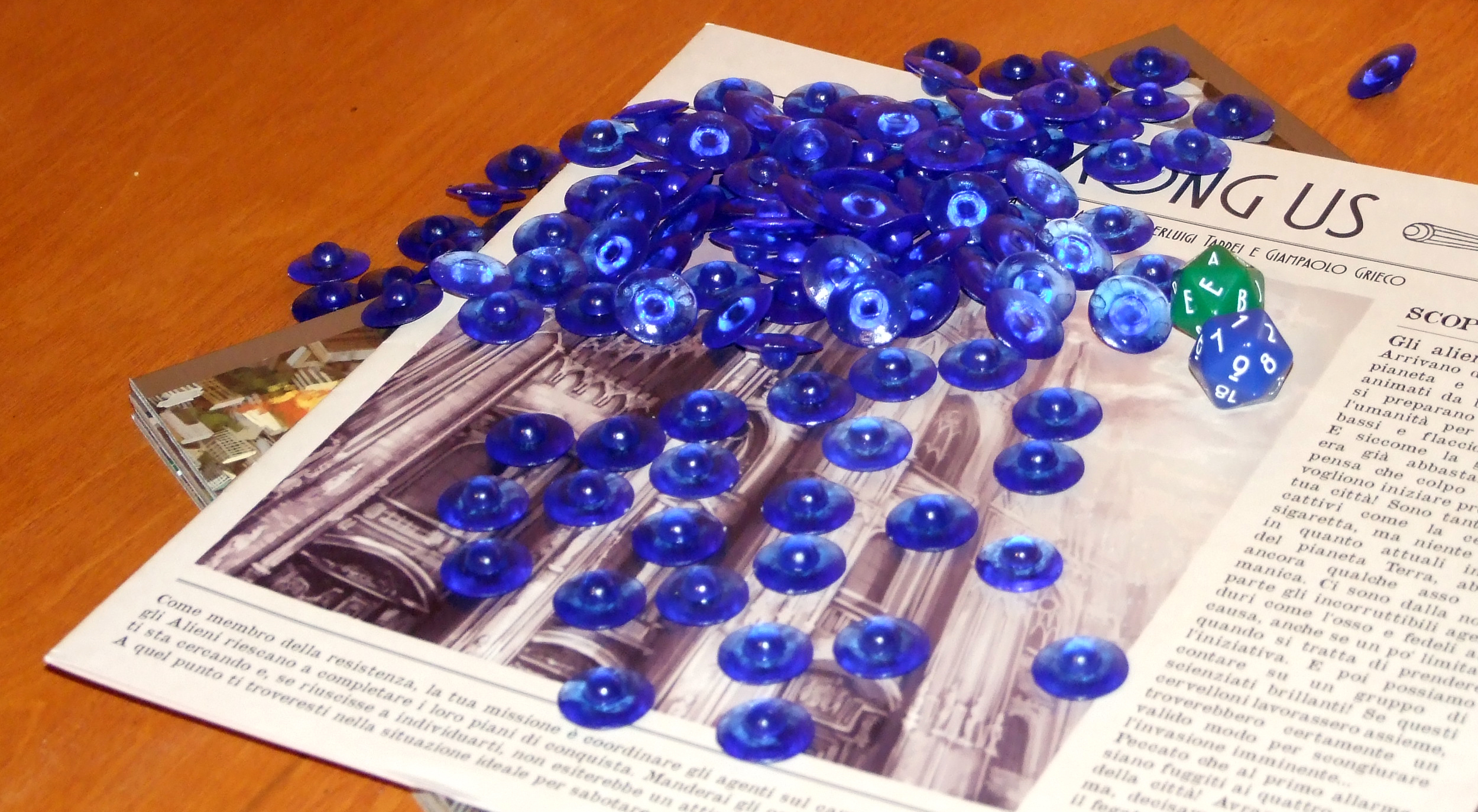 Among Us, can be played by 4 to 8 people, but in my opinion you should play with at least six people. Unfortunately, when playing in smaller groups, there are two problems. First of all, it is very easy to determine who is an alien, which makes playing it in disguise extremely difficult and we have almost no influence on play. The second is frustration – when everyone starts as a human, getting an alien card in the middle of the game is like being condemned to lose in a completely random way. In theory, you can approach this by using a strategy to play from the beginning on the “half foot in” in case becoming an alien, but it will artificially prolong the game and generate false suspicions through illogical decisions – after all, we play to win, not “just in case”. You can also immediately reveal yourself and hope to win the sector – which will completely eliminate the element of discussion over the table, which is the essence of games with a hidden identity. 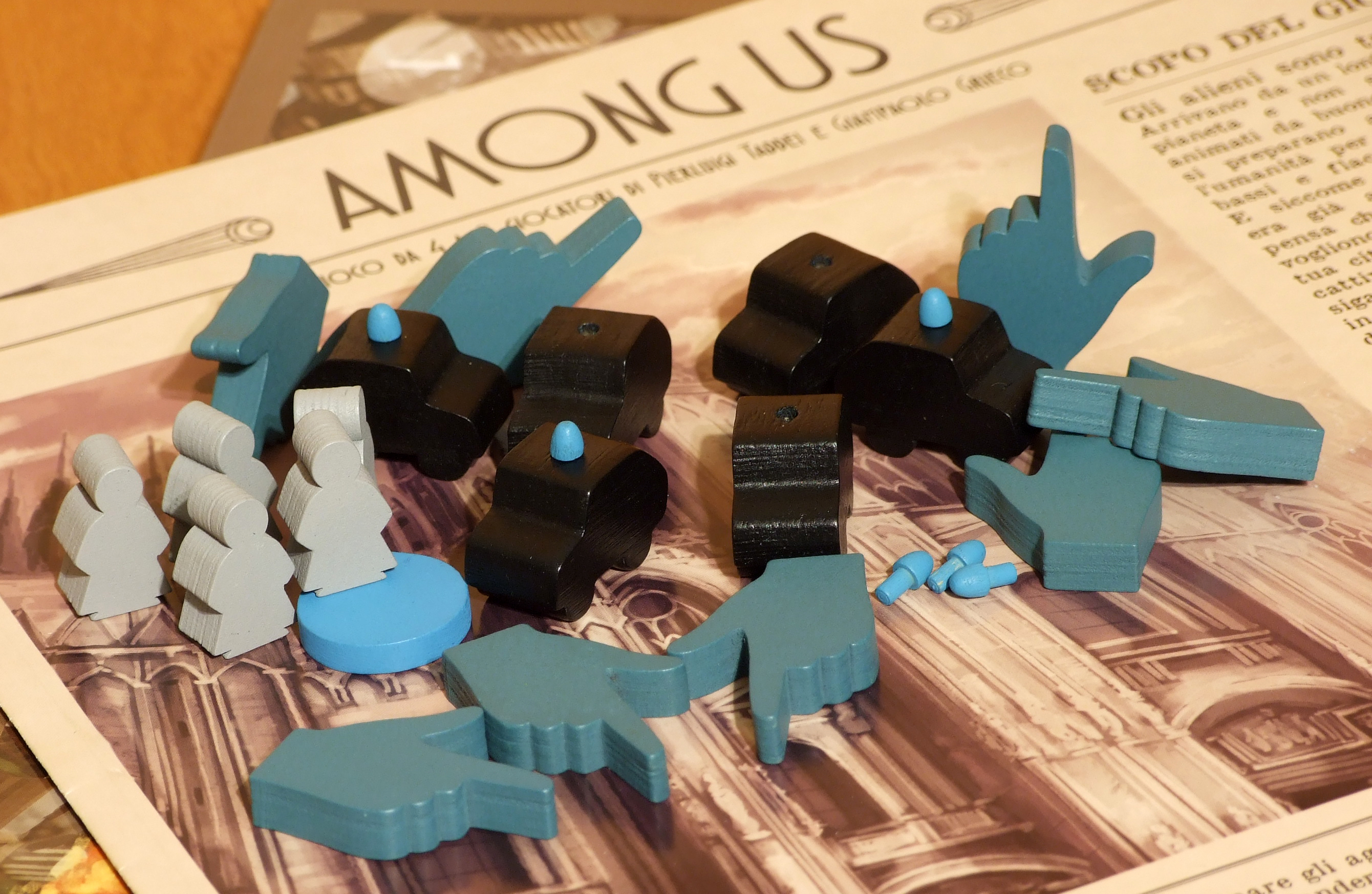 These problems disappear, when there are more of us, the player who’s an impostor, whether from the start, or by drawing an alien card, will be able to count on the fact, that somewhere among the others he can have an ally. Because of the number of players, it will be important to track who and how activated agents, it will be more difficult to coordinate actions, making it easier to smuggle an unpleasant event card, or “accidentally” break the sequence of passes between agents. And there will be an element of guessing who is sabotaging our plans, as well as attempts to establish contact between hidden aliens. One game should last about two hours, and the main element taking time will be the discussion on the optimization of evacuation, and who is who. 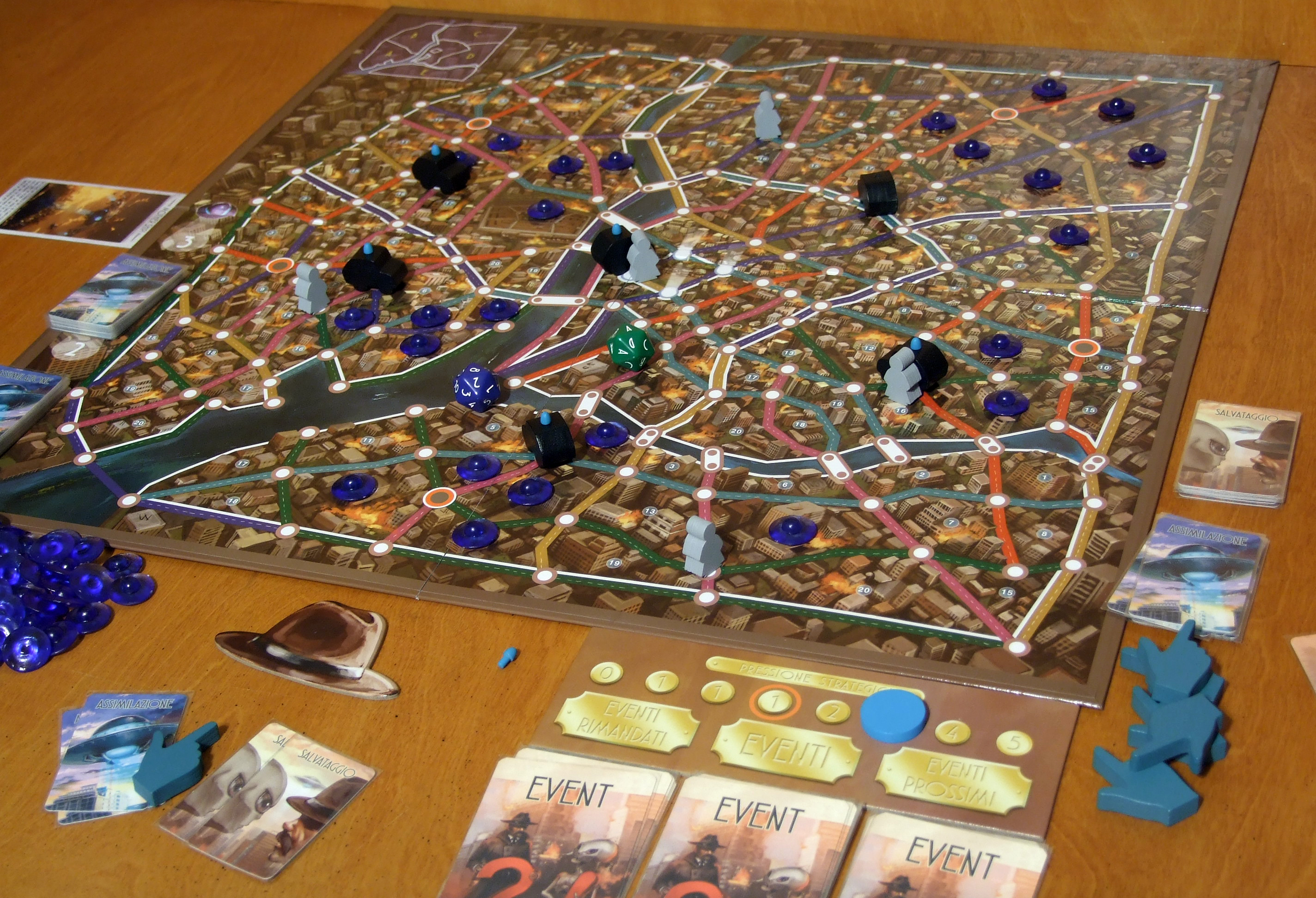 The best plays I had, were while playing at the maximum number of players, everyone was equally engaged in the discussion and what was happening. Only one action per turn significantly reduces downtime. When aliens were beginning to reveal themselves, there was added element of managing the sequence of actions to maintain control over the event deck, cleaning the evacuation route and domination of the saucers in the sectors. Dividing our attention between looking for impostors and solving the problem of fleeing scientists was really cool for me.

I can recommend this game, only if we have a larger number of people to play, and we just feel like something focused not solely on the deduction of identity. For a smaller number of players, there are titles that works better in this genre, as well as games emphasizing only the element of finding an internal enemy.