To paraphrase an old proverb – Too many ambitious architects spoil the block. Meet Architectura, a small tile placement game, about great plans for the city to build.

Pavel Atamanchuk is the author of the game, published in 2018 by Hobby World, whom you may know from his earlier game “450 Things to Do in Your Life“. Graphic design was taken care of by Marina Kunakasova, Nataly Uildrim and Sergey Dulin. 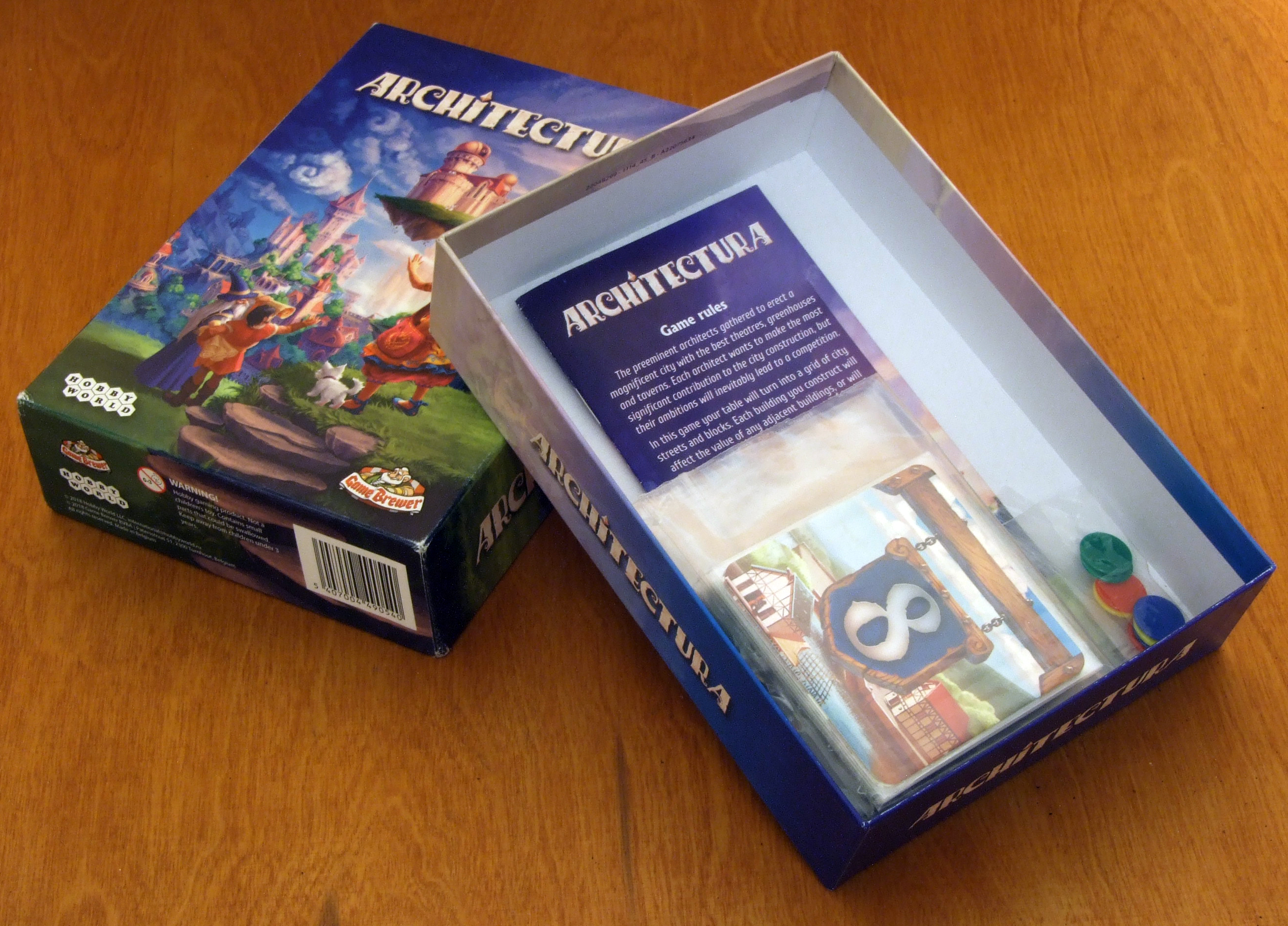 In a small box the size of a thicker book we get eight plastic tokens, a rulebook and a deck of 80 cards in the format of square tiles. The box is made of thick cardboard, it catches the eye with a colorful fairy tale-like illustration. Inside, you won’t  find any insert, and everything is packed into zip bags that come with it. Even after packing all the cards in sleeves, we have space for the second set of cards. If there are no plans for expansions, I would say that this box could actually be even more “pocket” sized. Plastic tokens are for marking “protected” cards. The cards are 69 mm x 69 mm in size. Rigid and coated, they should withstand a lot of games, but as a fan of sleeving I decided to immediately protect them against possible wear. The illustrations are very pleasant to the eye, and the symbols used are consistent and clear. The whole thing captivates and invites you to play. 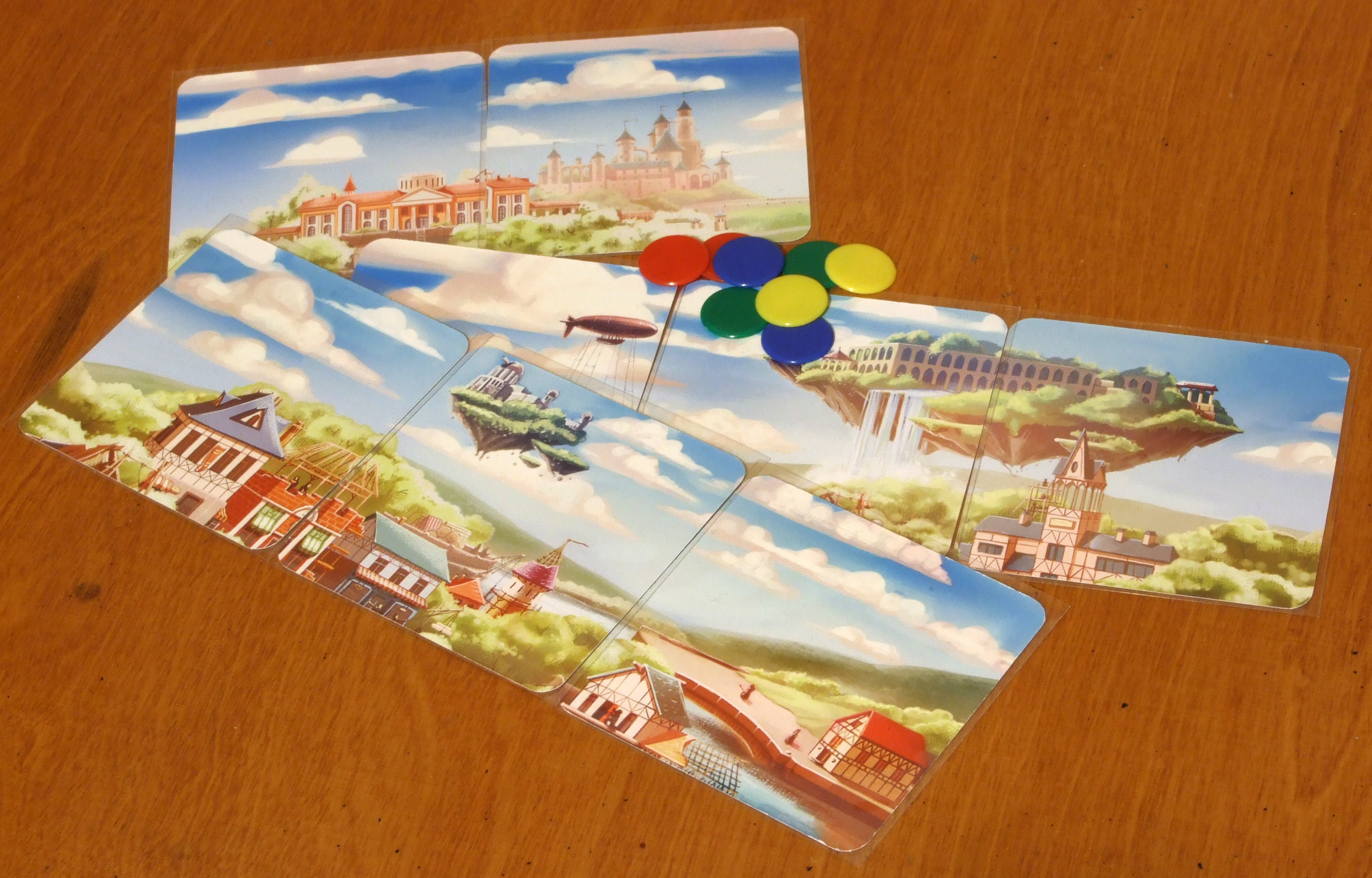 Four well-known architects sit down to plan the city. Their task is to create the best possible project. And everything would be great, if they worked on it together. However, personal ambitions and the desire to have as much influence as possible, on how the city will look, comes to light. Which results in arguing, constantly changing or destroying the buildings of other designers. The subject is well suited to the mechanics and compliments it. Keep in mind that we do not design individual buildings, but only plan their placement on the project grid. Maybe there could be some other theme also matching the mechanism of playing cards on the grid of the board, but this one, in my opinion, works well with it and gives us feeling of the scuffle between architects. 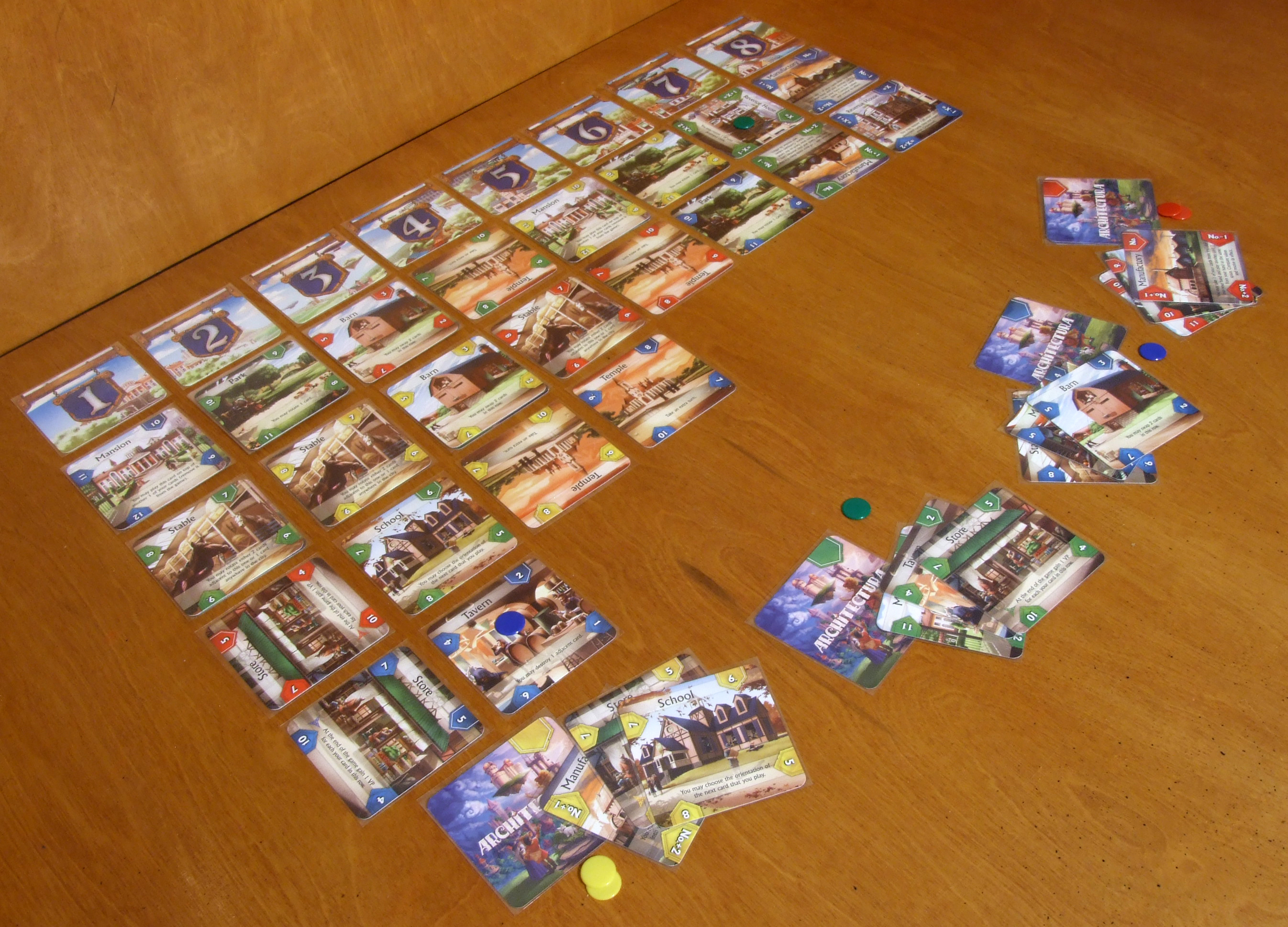 City grid always consists of eight columns, and the number of rows corresponding to the number of people playing the game. We start with 3 cards on hand – in our turn we play a card on the map of the city in one of the allowed places. Eligible places are either the initial unoccupied spots of the highest row, or a space which has on its left side an undestroyed building (spaces with destroyed buildings are treated as empty). After playing, we must compare current point value of our card with the card on its left, and apply one of the rules to that card. When the values ​​are equal – nothing happens; if ours has a smaller value – the value of the other is increased; if our value is higher – the value of the card on its left should be reduced, or if our value is two or more times bigger, it is destroyed. After performing the comparison, we proceed to the special effect of our card and resolve it. Actually, that’s it. The goal of the game is to collect as many points as possible for our buildings, we play until all the cards have run out, or no one can add more cards to the city plan. Cards have point values ​​on each edge. The current value is the one on the top edge of the card in relation to the column number cards. 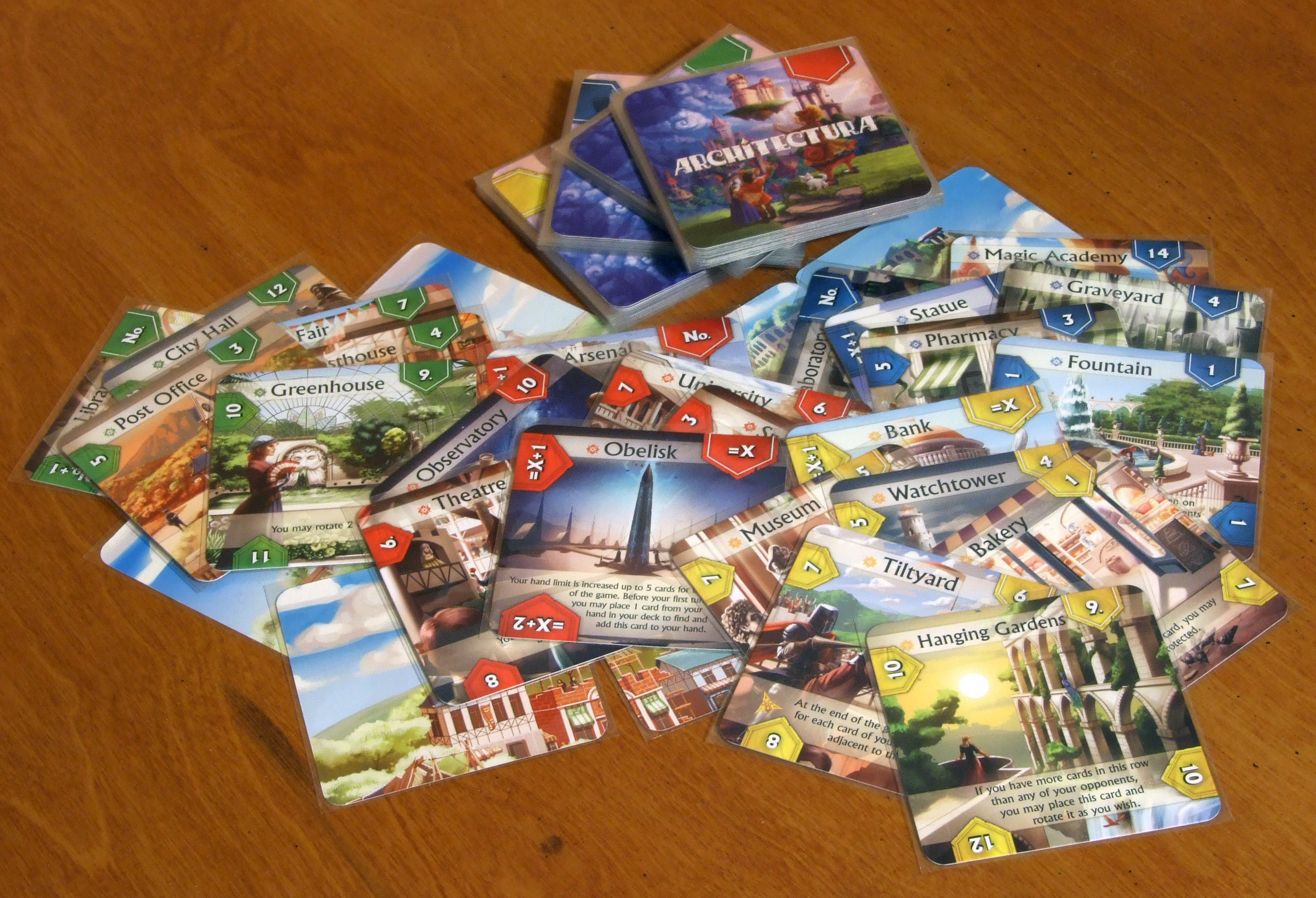 Architectura offers us two variants of the game to play. The first is symmetrical, in which each player has exactly the same deck of twelve cards. The second is asymmetrical, in which before the game begins, players can swap up to 6 cards in their deck for unique cards for their own color. Differences in effects between additional cards can be large, but it does not harm the balance of the game. 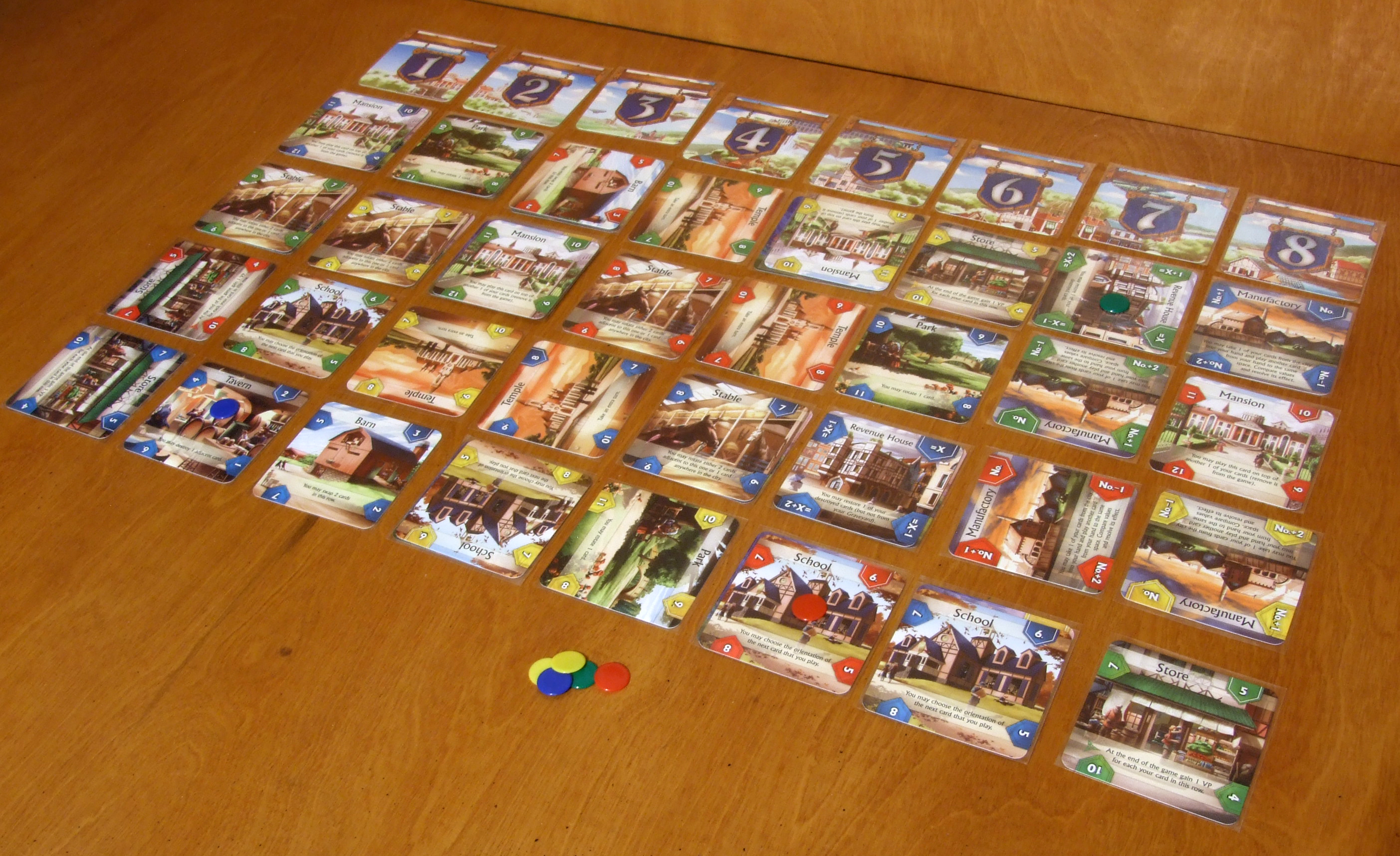 We can play in a group of 2 to 4 players, one game play is usually around 30 minutes. I had the opportunity to play a lot of games with different people, including  time at this year’s Pyrkon convention and Architectura works great. Most often, immediately after one game, the next one was played. Both the hardcore gamers and casual players had fun. It takes 5 minutes to setup the game and explain the rules. During the game, despite picking cards, randomness is not felt. Having 12 cards in the deck lets you know which cards you have already played and what you have on hand, you can also observe what opponents have already played, and plan the strategy of following turns with that in mind. Despite the enormous simplicity, we get a lot of depth in strategy here – I’m always very impressed when the author manages to achieve this effect.  If we need something more, we have an available asymmetrical variant, in which strategizing already starts when we are preparing our deck.

In my opinion, it is a must have game. The box of my copy already has visible signs of wear, because recently I always have it with me, and am playing the hell out of it. In the future, I would love to see an expansion to this game, increasing the asymmetric pool of cards which we can modify our decks with.