The reception of various board games can vary in different people’s eyes. It is very subjective and brings up many different feelings related to the aesthetic values and sense of them being enclosed in games. What basically defines them as a works of art. Until now, categorizing board games as a field of art was not so obvious to me. Crossroads of Heroes dispersed the mist that veiled my full awareness of this fact.

At the end of February 2017, the Kickstarter campaign of this game was launched. The project was funded at the beginning of March, where it was ultimately supported by 664 people for almost 50 thousand dollars. The person responsible for the creation of Crossroads of Heroes is Patrick Lee aka “Pat Piper” – the creator of game mechanics, illustrations, graphic design and the story. Currently game is available on its official website. 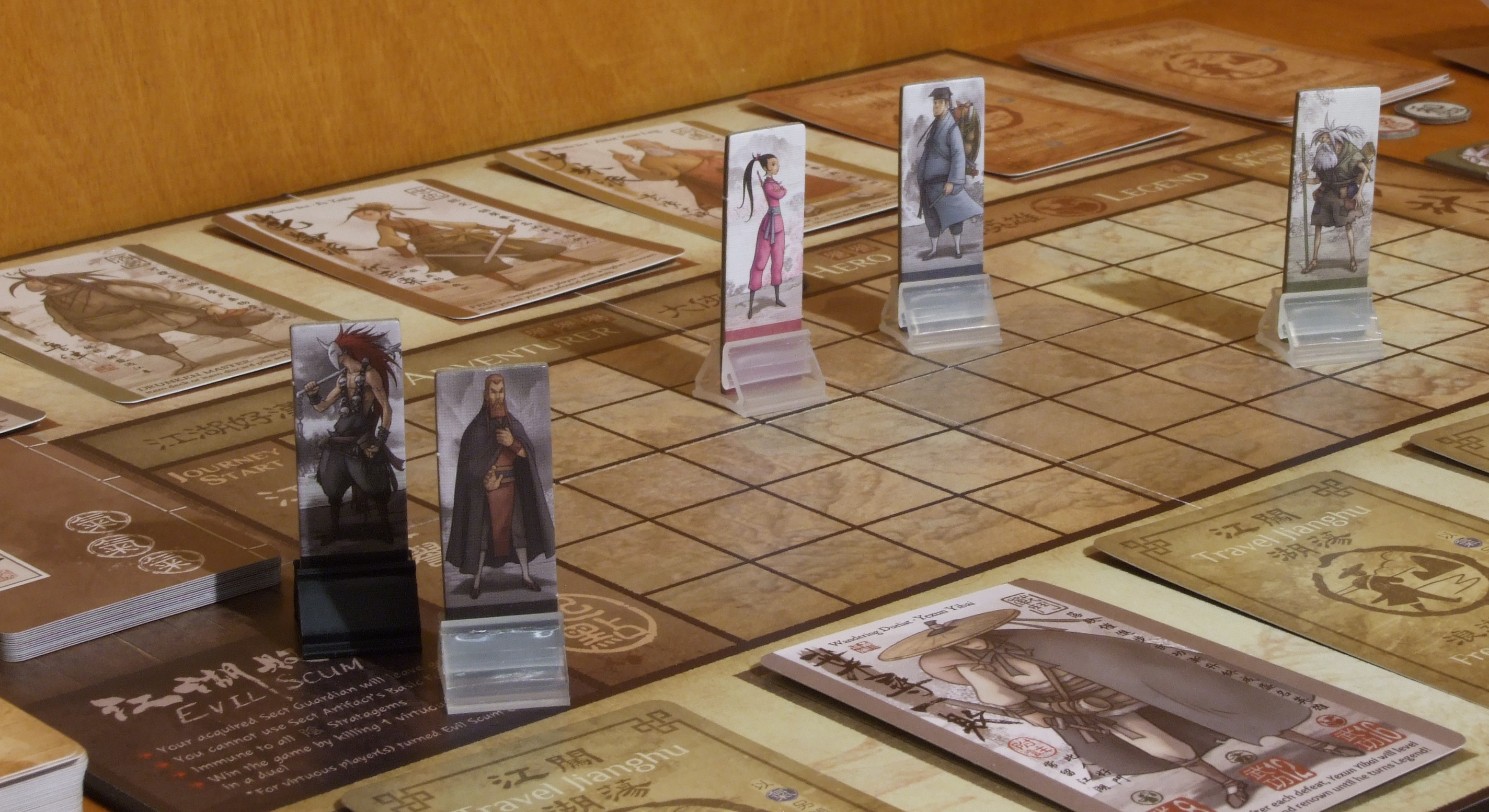 Usually at this point I mention more or less the contents of the game box, paying attention to the quality of the components, consistency, which results from how the illustrations correspond with the graphic design and setting, noting possible deviations from the norm in a positive and negative direction. This time, I will start with how surprisingly well the author has combined all these elements. The quality of the paper used for the cards, the board or even the rulebook adds to the atmosphere and in itself provides the impressions affecting the reception of the setting of East Asian martial arts. I am a fan of sleeving game cards, in order to keep them in the best possible condition for as long as possible. But in this case, however, sleeving cards, although tempting is out of the question. It would just take away one of the immersion elements. Next are the illustrations, calligraphy and the graphic design that we have on tokens, cards and game board. One could say that the look of a small game board suggests modesty and humbleness which will flourish with the other components of the game that will find their place on it, and the design perfectly reflects the allegory of adventure that the wondering heroes will take, to gain the title of the Grand Master of Wulin. Each component, if it does not meet the quality standards of current production, stands out above it. The way in which the rulebook was written, not only perfectly explains the rules of this simple game, by adding examples, in its form also encourages the use of terminology, which takes players into the game world stronger. Every time I introduced this game to someone, I taught him the full terminology with an explanation of the meaning, one hundred percent, despite efforts, butchering the phonetics of some words. But knowing the actual meaning of a word almost from the start everyone referred to a given component in the context of its original meaning. It’s incredibly strongly affecting the atmosphere of the game. At the end of the admiration of the components, a small cool curiosity – a box with an expansion in which we receive an additional character and cards, fits into the insert of basic game box. As for the list of components, we have piles of tokens, cards, personalized player aid sheets for each character, small folders in which we will hide the technique cards during duels, plastic stands and character standees. 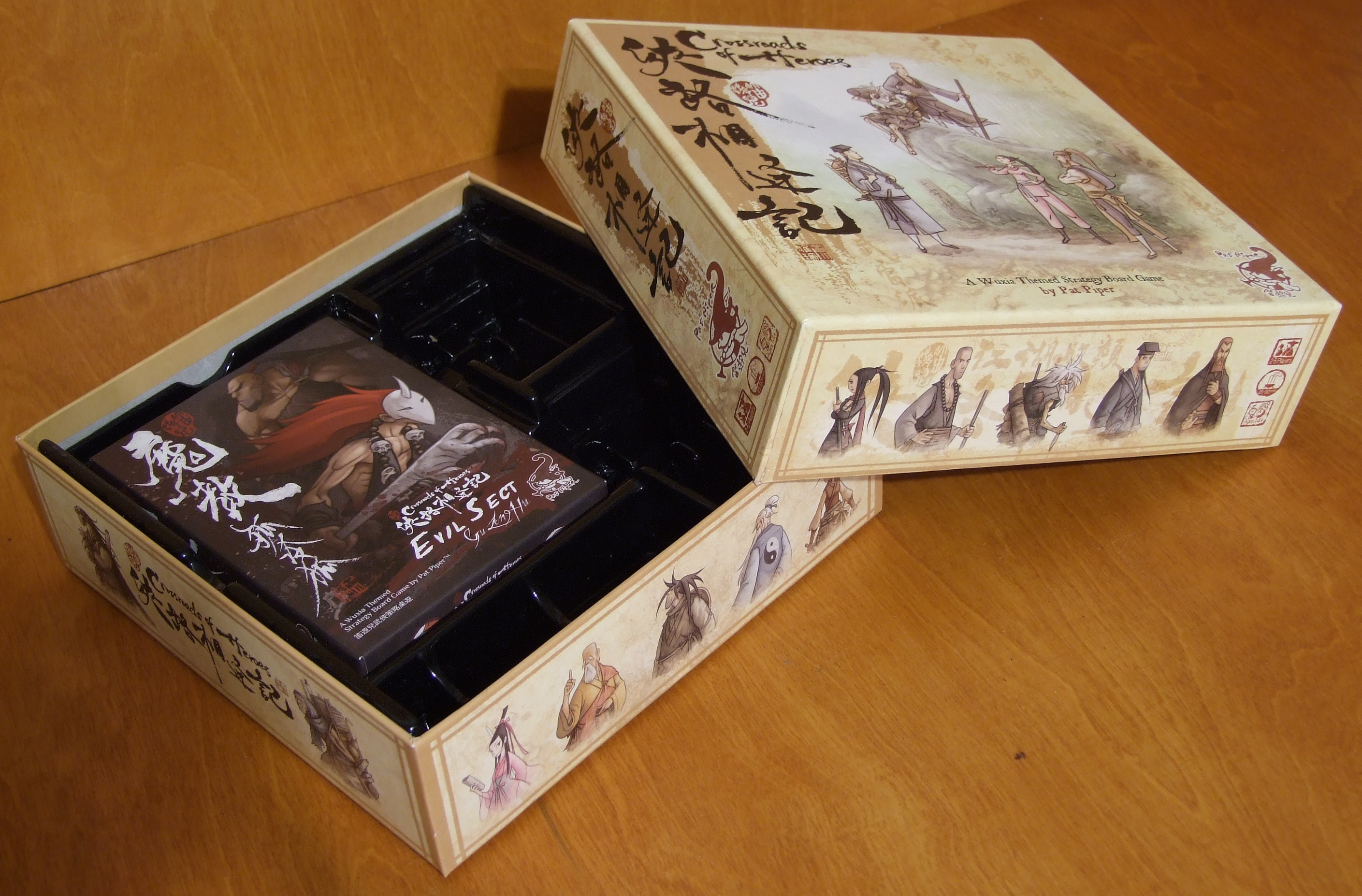 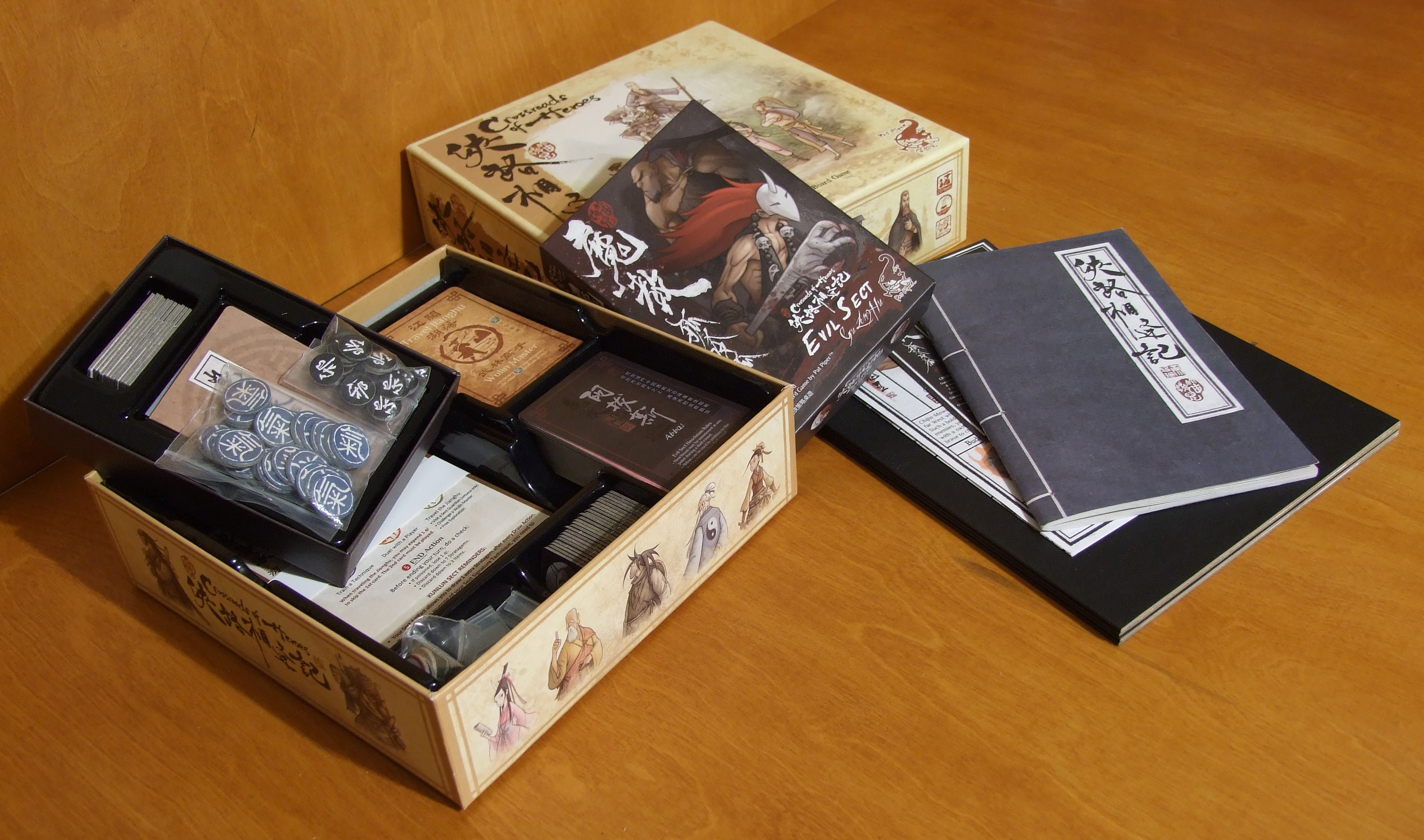 In Chinese literature there is a genre known as Wuxia, which tells the adventures of the lives of heroes of the various martial arts. In the west, this genre has been widespread mainly through movies that are mistakenly referred to as kung-fu. Since I was a child, I loved watching them because of the spectacular nature and colorful stories. Even now, I like to reach for something from the classics of the genre, and I really wanted to see a good adaptation of these stories in the board game medium. Usually, I found games that focused only on the realities of the duel itself, which was not that interesting for me, despite the nice complex mechanics. Crossroads of Heroes, on the other hand, is based entirely on a simple stereotypical story for this genre, and duels are just a complement to the entire setting. Grand Master of Wulin dies in unexplained circumstances, leaving emptiness behind. Each of the major martial arts sects decides to fill this void with its candidate. And this is where we meet our heroes, adepts of their sects who will stand up to some kind of race, for who will get the most renown in the martial arts world, and thus will take the title of Grand Master of Wulin, bringing glory to his sect. During the journey, they will be able to show their honor, wisdom and cunning in their pursuits. They will be able to win the title, as a shining example of people of honor or black characters, evil scum that during their journey will kill their competitors. The expansion set to the game introduces another playable character. Adept of dark arts, who begins his journey as an evil scum, and his goal is to drag at least two honorable players over to the dark side. During the journey, we will be able to learn the techniques of fighting, duel with other competitors, as well as visit the masters of Wulin and strangers who are traveling around. Each of the characters available is archetypal for this genre, so that the player who is at least little familiar with the world presented, instinctively will feel its proper way of playing, during the play very easily getting into character. 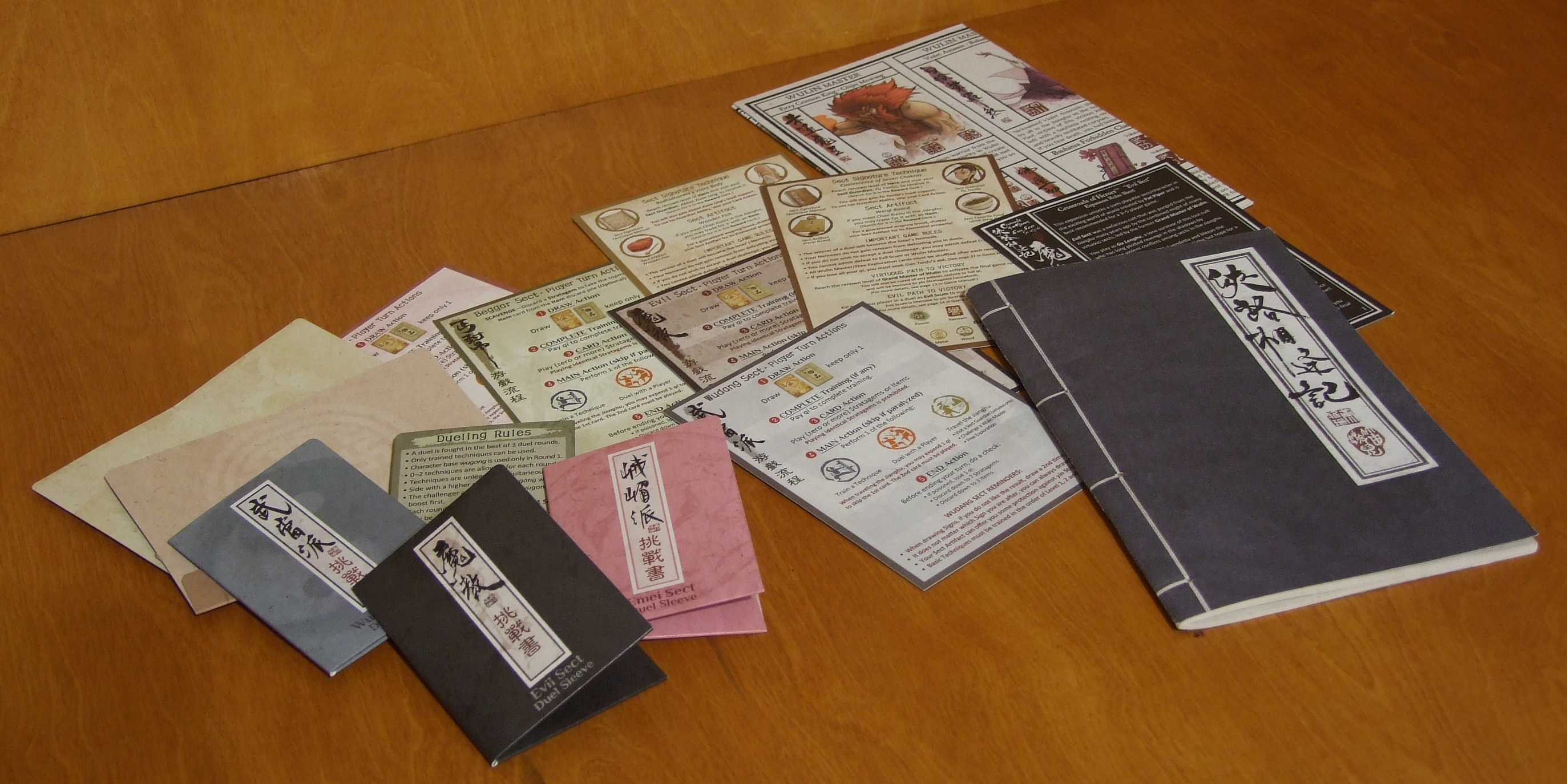 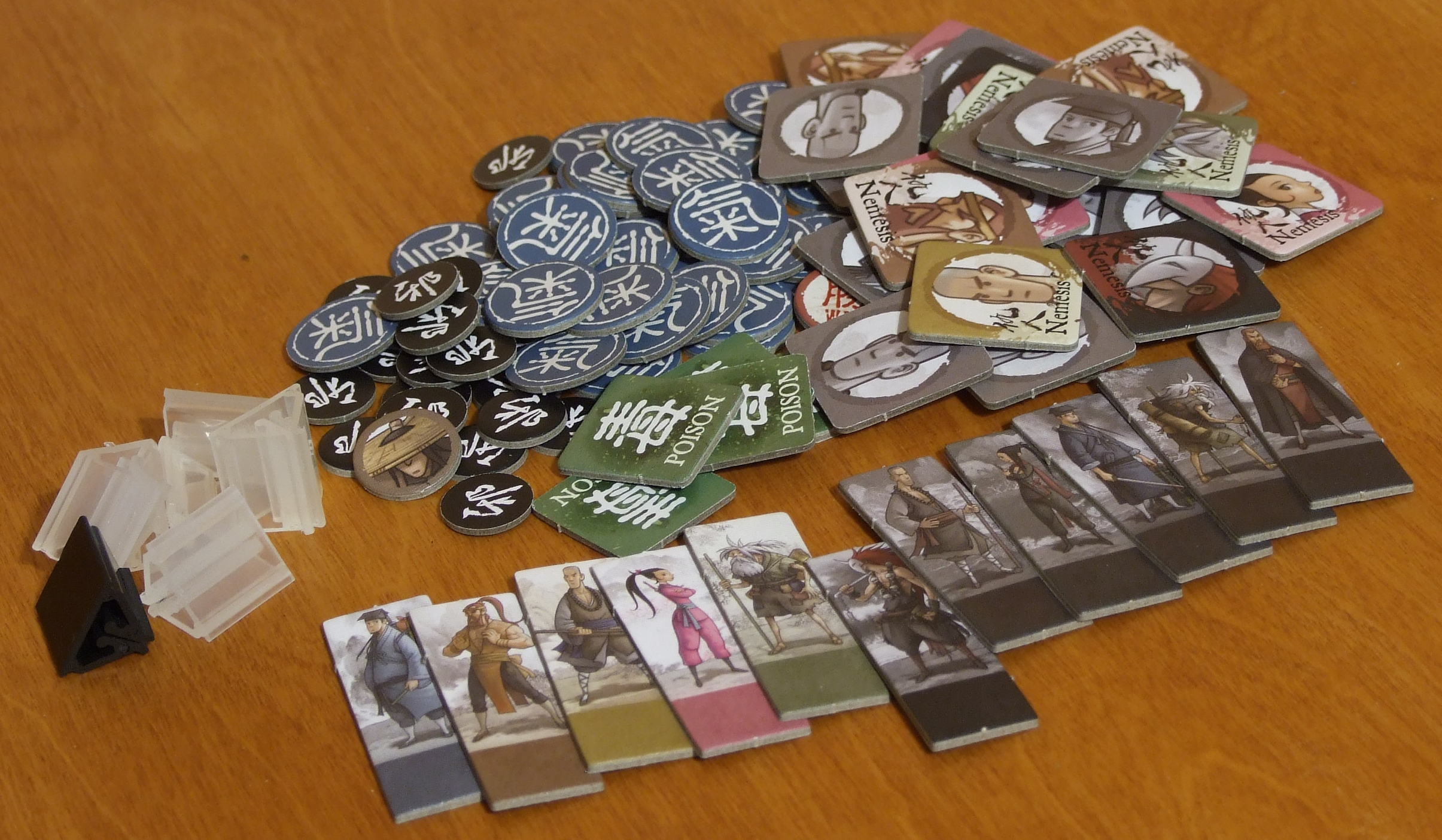 Mechanically, this game is basically a simple race with bidding element. Players looking for complex mechanics will be disappointed. In short, the player’s turn begins with drawing one card from the deck of stratagems and items and making a decision to take only one of them. In the next step, we will finish learning the technique we train (if earlier we’ve started to learn one) and we can play any number of cards collected during subsequent turns depending on the conditions required to play them. In the main phase of our turn, we decide whether to start training another technique, go to one of the masters or strangers, or challenge someone to a duel. We get renown points for played cards, some encounters and duels. The person who is quickest in reaching the finish line, starts the last turn, in which someone else can join her there and challenge her to the final duel. In addition to duels at the finish line, the pretender to the title of Wulin master has to fight for death and life with each evil scum that emerged during the game. A quick transition to the dark side at the last turn can be a good way to steal the victory. As for the duels themselves, we fight in best of three rounds. In the duel, we use cards of learned techniques, previously played stratagem cards and concealed weapon cards. Each such card has a certain value, we can assign 0 to 2 technique cards and any number of weapon cards that can be played after counting in each round. The whole fight is based on a bluff, a cold calculation and a bit of luck, because we have an opportunity to draw random elements that could slightly boost our technique cards. The person with the greater end value is the winner of the round. In the game there is almost no downtime, not only that the turn itself is fast, we are usually involved in what the opponents do, to later be able to actively countermeasure their game plan. At first glance, the characters we play may seem similar, but this is a wrong impression. After playing few games, it is very easy to notice the weak and strong sides of a specific character. Similarly, with the way to win, the first impression is that we just run for renown points and the sprinter wins the game in a few turns – this is also wrong. The range of strategies available to others to stop or punish us for the rush is quite a good amount. The game requires us to constantly adjust our strategy, so that we do not swap bad for worse. 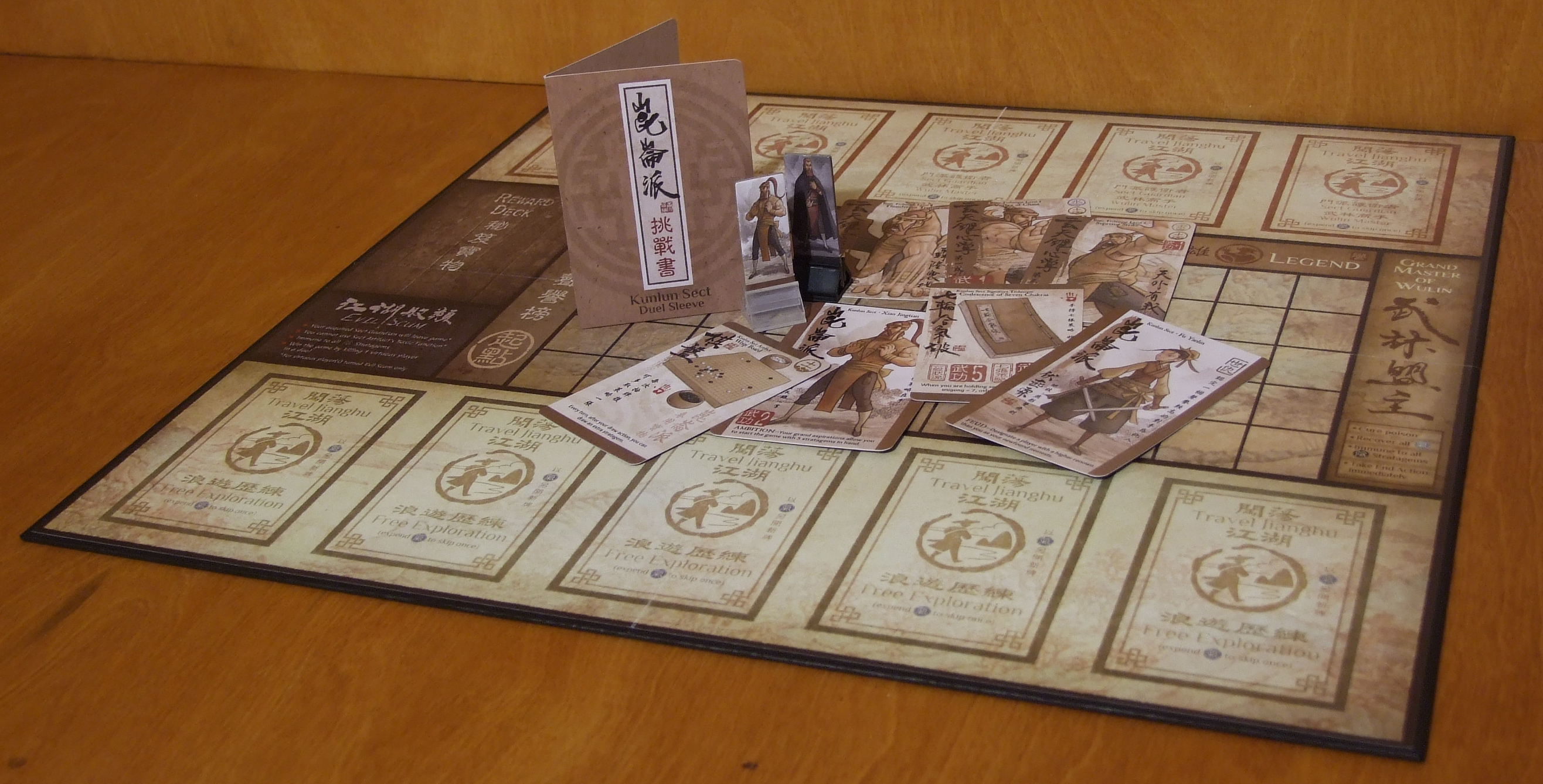 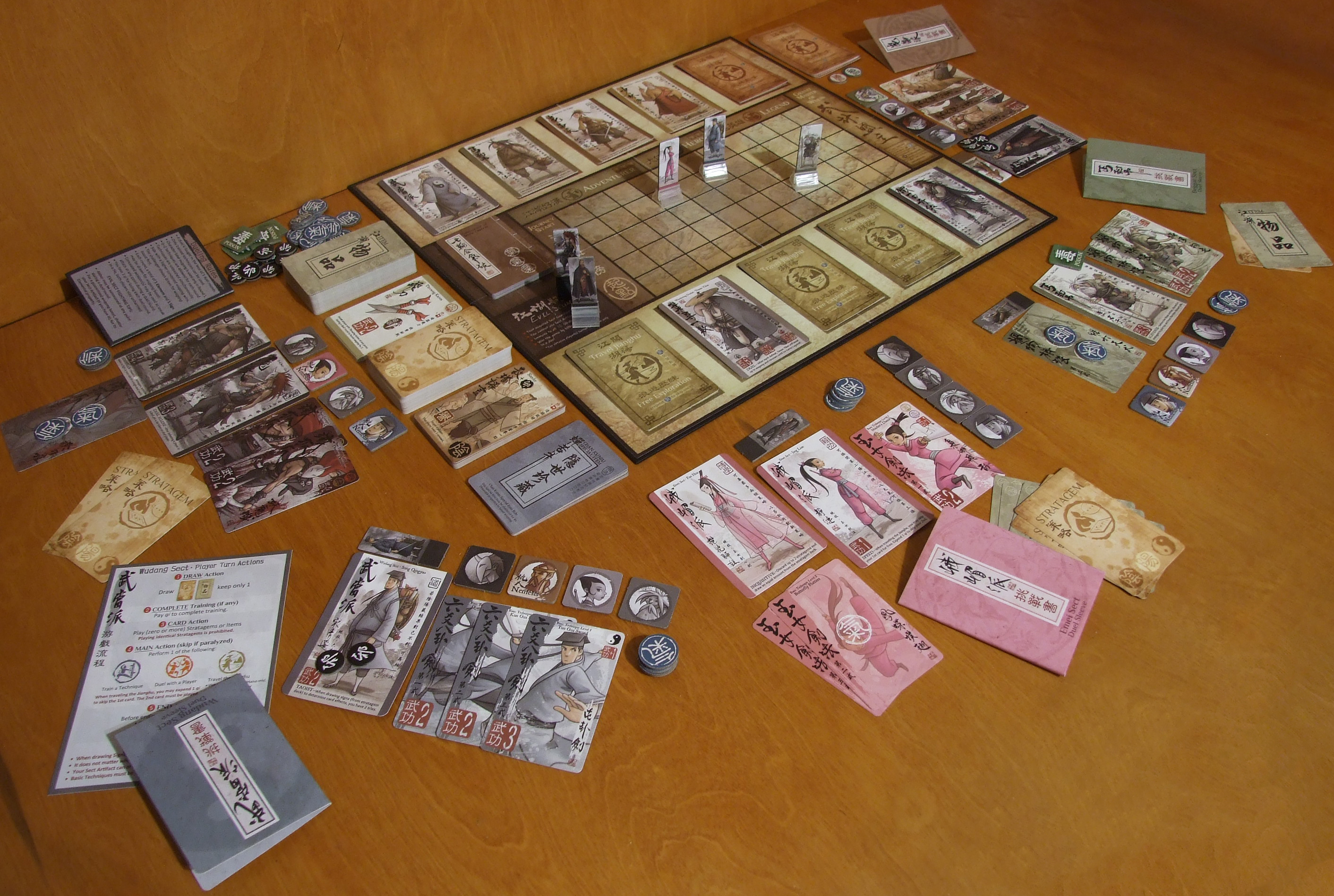 In my opinion, Patrick Lee created a coherent work of art, that allows introduction to Wuxia and a gateway letting delve into her. The threshold to get to know rules of the game is very low and no one should have problems with it. The manual basically left no questions for me, but the author constantly dispels any uncertainties in the updated FAQ. It was amazing for me as the whole game, devoid of descriptive adventure cards or some scenarios, and easily draws players into the climate of the world presented. A simple race and a simple blind bidding despite the possible cold calculation created emotions thanks to the hidden “aces in the hole”. Every time I had the opportunity to talk about the play we just finished, all the stories sounded like they came from a movie with Jackie Chan or Sammo Hung. Emotions boiled because of events, such as in one of our games, where at last point of renown to be gained, a member of the Beggars’ sect was suddenly dragged by the evil scum Gu Lenghu from the evil sect to the dark side. Then the young adept of the Emei sect killed the main villain just to fight the final duel for Grand Master title with the clever Shaolin monk. Who in the culmination defeats her and kills off the second villain who previously has gone evil. And all of this is lined with bluffing and cunning. I recommend playing this with the accompaniment of traditional Chinese music, adding more flavour to our struggles. I love this game. For advanced players, it can become a pleasant break from heavier titles. The whole game can last from 30 to 90 minutes, it is intended for groups of 2 to 5 people, but in my opinion, it’s best to play in group of as many as possible, and the minimum number of players is three. Crossroads of Heroes is a very good title when it is taken as a whole. Unfortunately, someone who wants to tear it down to a dry mathematical analysis will spoil his fun of it.