In the history of Japan there was a period known as Sengoku. Started with a coup d’etat of the Meiō era, when Masamoto Hosokawa exiles Ashikaga clan’s tenth shogun from the capital. A time, when local rulers – the daimyō – incessantly fought for power and influence. Only after a hundred years, when Hideyoshi Toyotomi subordinates the Hōjō clan and unites all the provinces, the fighting for domination comes to an end. Today we will assume the roles of samurai, participants in this hundred-year struggle, in a quick card game – Zipang Portable.

First of all, I’d like to point out that the copy of the game owned by me is a prototype, available before its Kickstarter campaign, as such, final version may differ from the one reviewed here.

The creator of the game is Ko Sasahara, the publisher is Engine-ID. Zipang is their first title. The name says “portable”, because the game is a prequel for its bigger board game version, which is under development right now. Responsible for its appearance are Issey Kunogi, Tsutomu Araki and Shinya Suzuki. 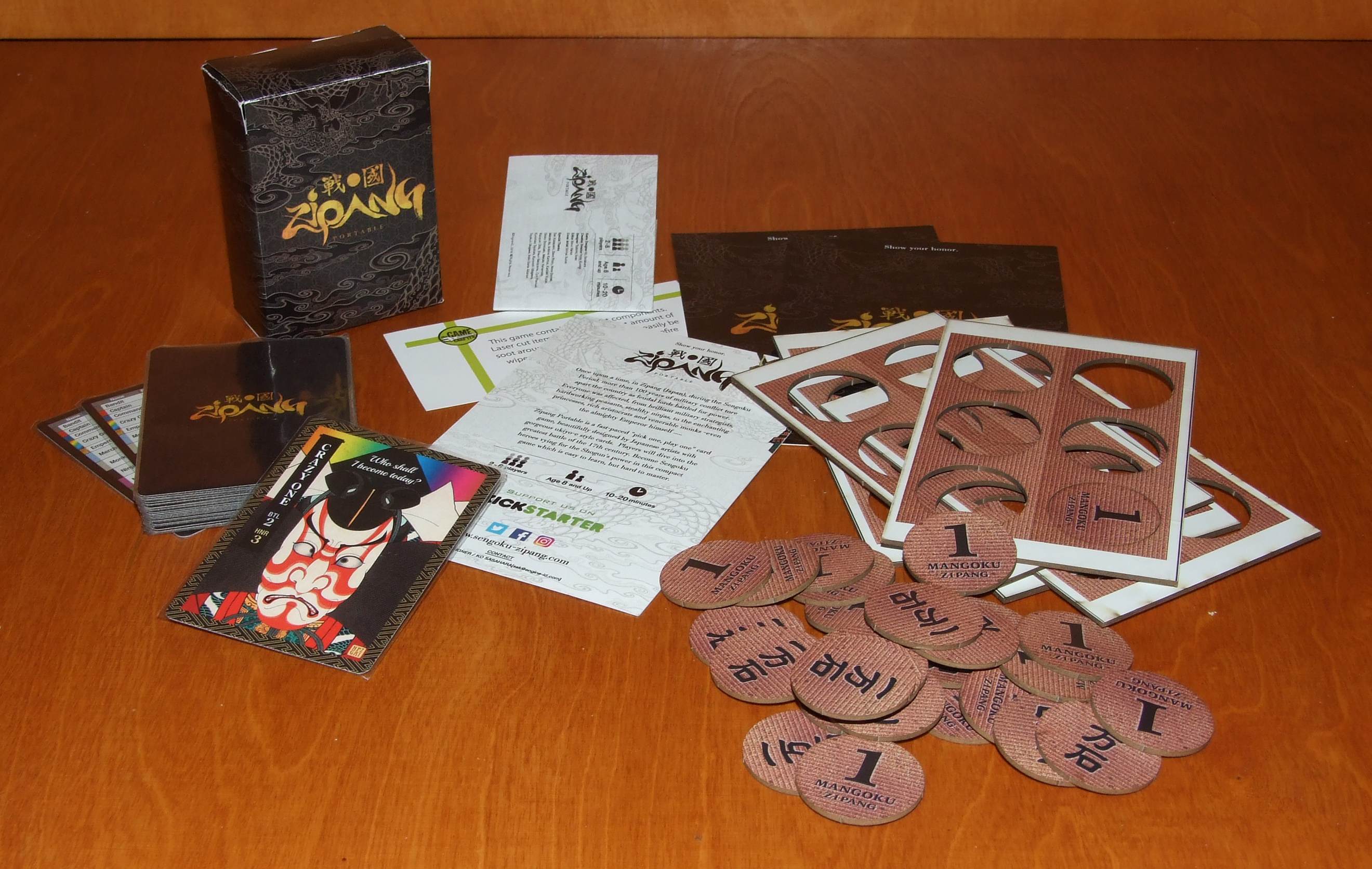 The pocket-sized box I received measures 6,4 cm x 9 cm x 3,4 cm , includes a deck composed of 30 cards, reference cards and a manual. Separately packaged there were 5 punch out sheets with 30 Mangoku coin tokens 3 cm in diameter. 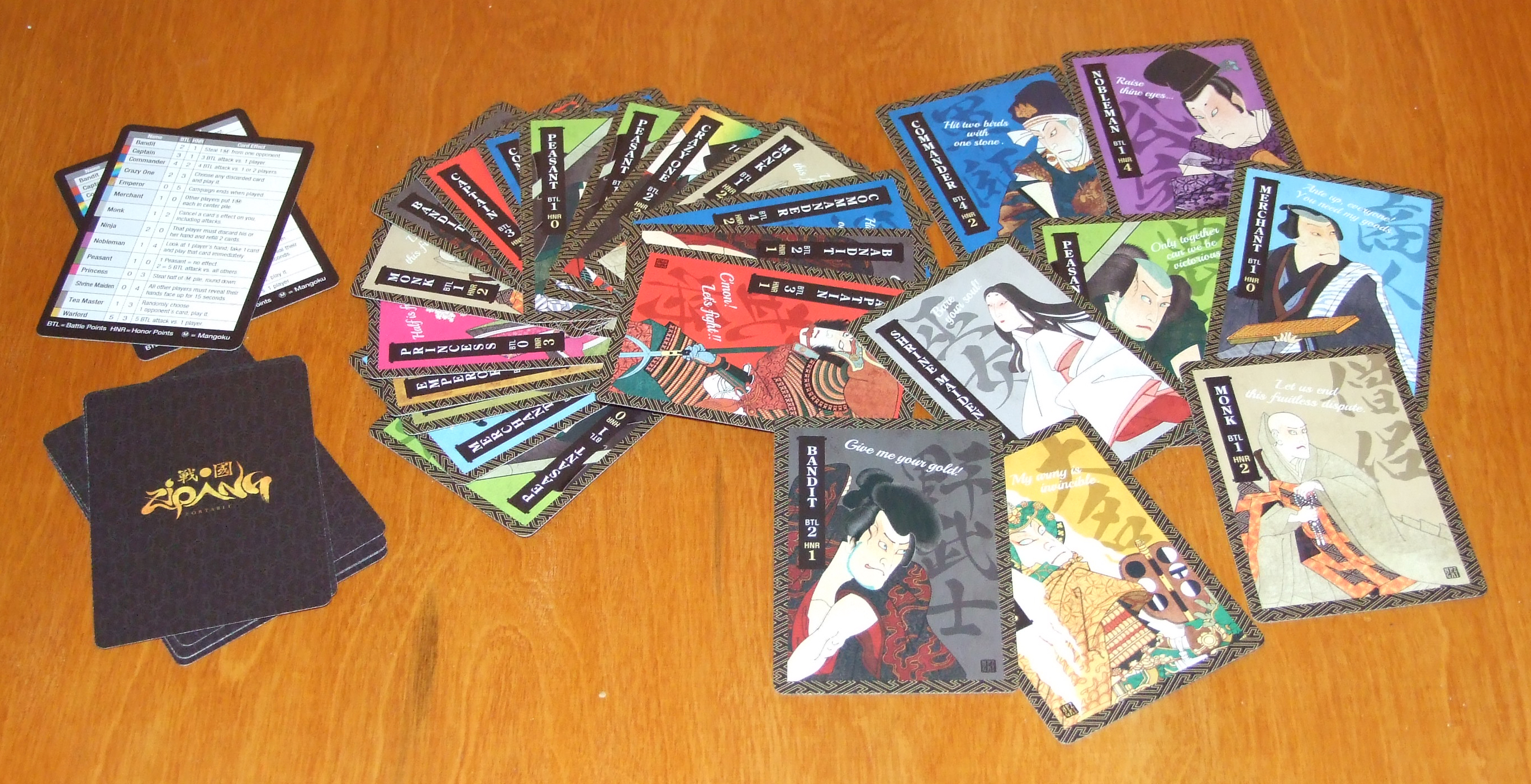 Let me start with graphics and illustrations. On a brown box, adorned with classic motifs the gold title stands out, beautifully encompassing an image of Mount Fuji and sun above it. Upon opening the box we can see the cards (6,3 cm x 8,9 cm). Both the back and the frame around the front are decorated with very dense patterns resembling somewhat ones we see on kimonos. The card front displays ukiyo-e style illustrations, featuring 13 character types we will be using during our power struggle, which look as if they were  taken straight out of historical xylographs. On the left is a frame with the card’s name, battle points and honor points. On the whole, the card looks great, the only exeption being the appearance of the quote put near the illustration, which breaks the aesthetic and that glares a little. The paper is good quality, but in my opinion it’s still good to put the cards in sleeves. One possible remark I could make about what is included on the card is the lack of the number of times the character appears in the deck. That information is provided in the manual and after a dozen or so games the player starts to remember how many times he can draw a certain type, however that gives an advantage over those who are still getting familiar with the game, so it makes sense for that info to be on the cards themselves. 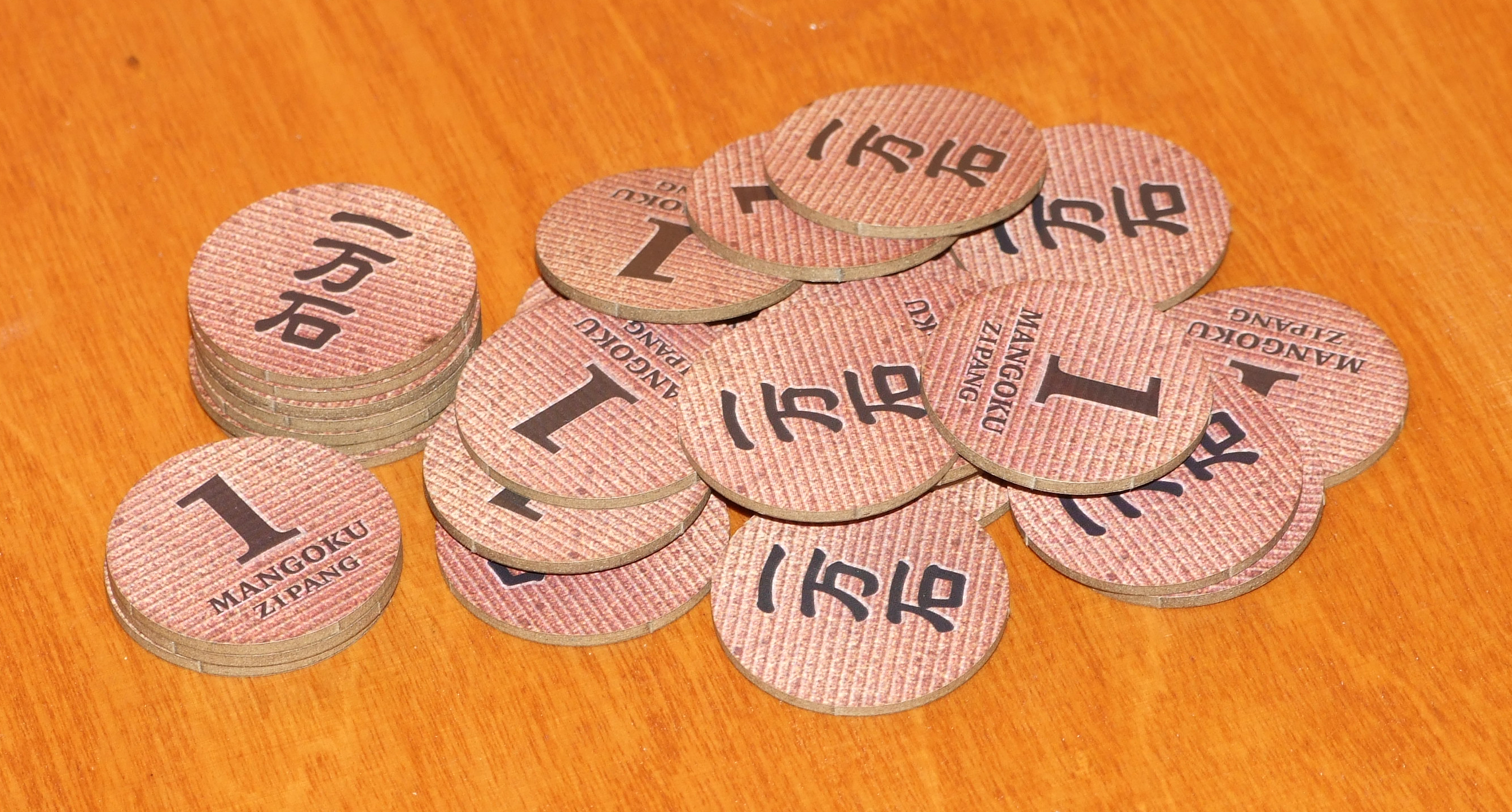 The tokens, fairly large and comfortable, were laser-cut and their edges are burned, as a result a few of the players were fooled – enough so, that at first they were under the impression that the coins are made of wood with stickers on both sides. In reality it’s 1,5 mm thick chipboard. Graphic-wise they match the rest of the game and are nice to use.

I mentioned “just in case” sleeved  cards. Along with the tokens stuffed into a ziplock bag, they fit in the box without damaging it, only stretching it a little. If the packaging were wider and higher by about a millimeter, everything could be put away perfectly. 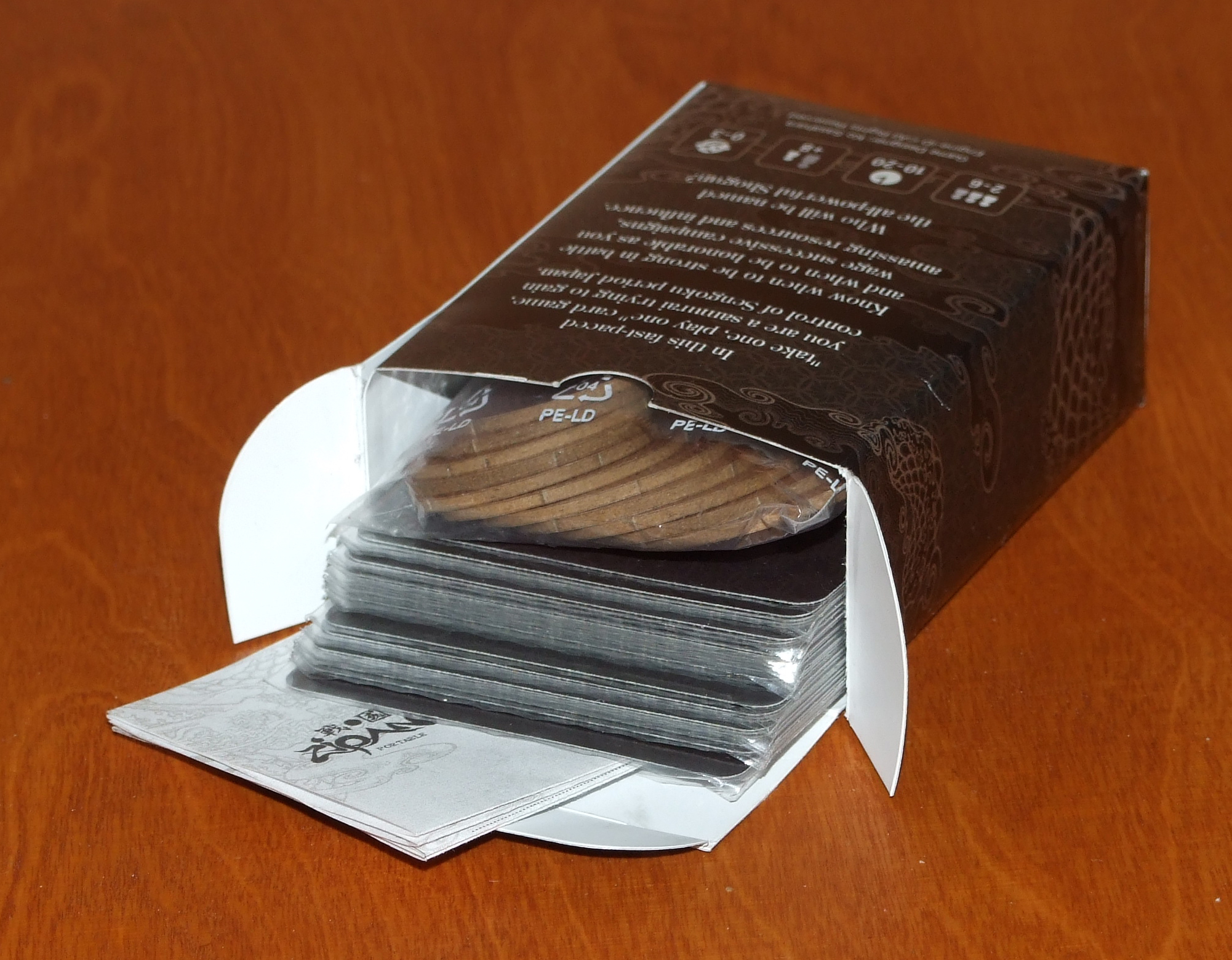 The game itself is very simple and quick, turn mechanic is: always have two cards, at the beginning of your turn draw a third, pick and play one. Card actions are simple, described comprehensively on reference cards and in the manual, the played character takes effect immediately. The game unfolds over a few campaigns, one lasts until someone has nothing to draw from or somebody plays the Emperor – in both cases everyone reveals their cards and count the amount of honor points on them, the person who has the most wins. When at the end of a campaign a player has no more Mangoku coins, the game is over and the winner is the player with the most coins. There is one more way to end the campaign and the game. In the deck we get attack cards. When playing an attack we pick a target, the defending player can either play a Monk card which nullifies the attack or show his cards. If the cumulative value of his Attack Points is equal or higher to that played on him, he succeeds defending himself and keeps playing. Otherwise, he is excluded from the remainder of the campaign, loses his cards unable to play any new cards, but his coins may still fall prey to other players. If after a series of attacks only one player is left standing, that also ends the game. The creator anticipated that someone may have more luck at the beginning than others. If you are the target of an attack card and you haven’t had your turn yet, instead of showing yozur cards with Attack Points or playing the Monk card – simply throw one coin into the common pile, thus nullifying the attack. 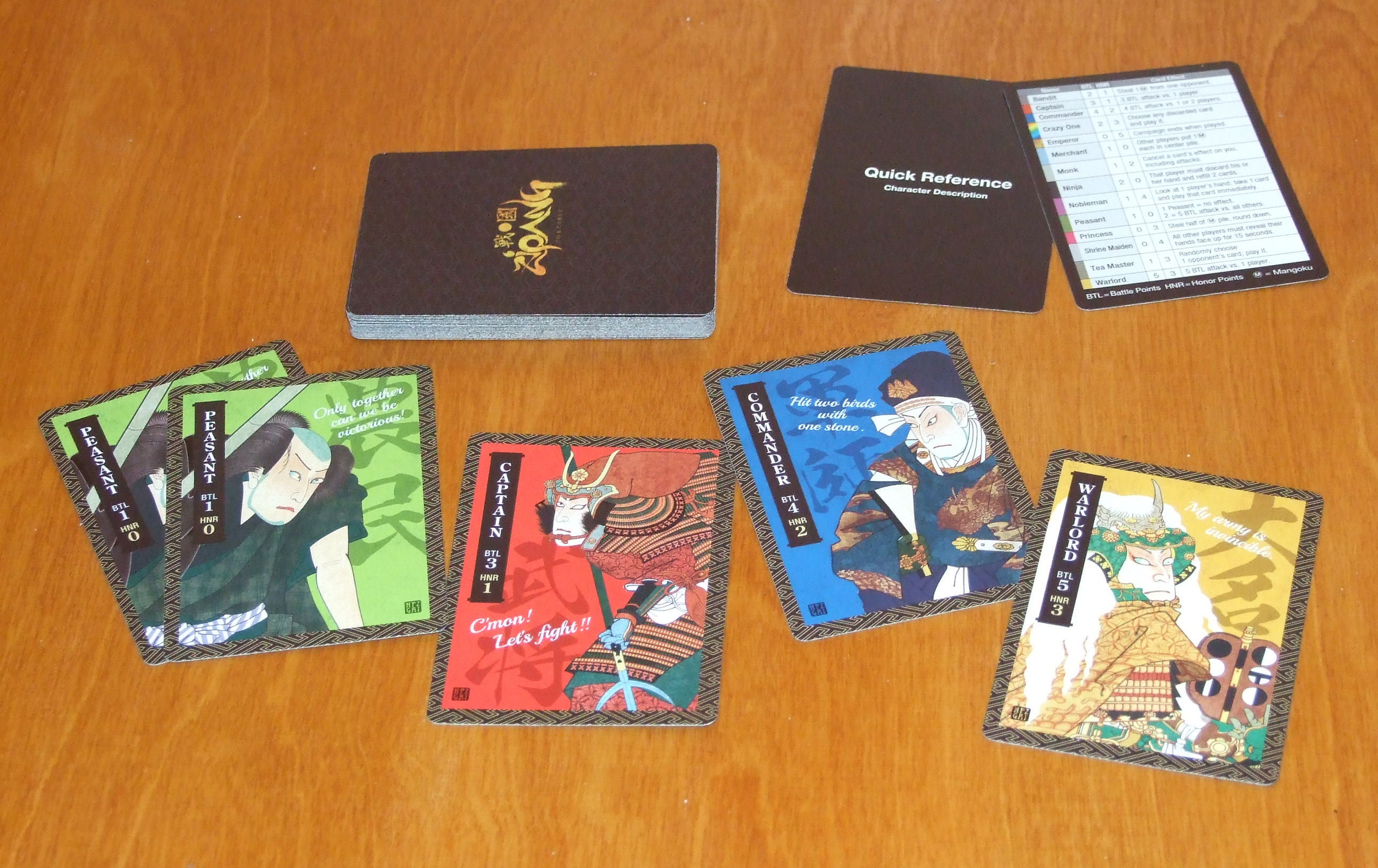 How do we lose coins? Firstly, we start the game with five coins (four if there are only two players). Each campaign is initiated by throwing one coin into the common pile. The winner of a given round takes the coins from the center of the table for himself. Secondly, most of the cards focus on actions concerned with coins. 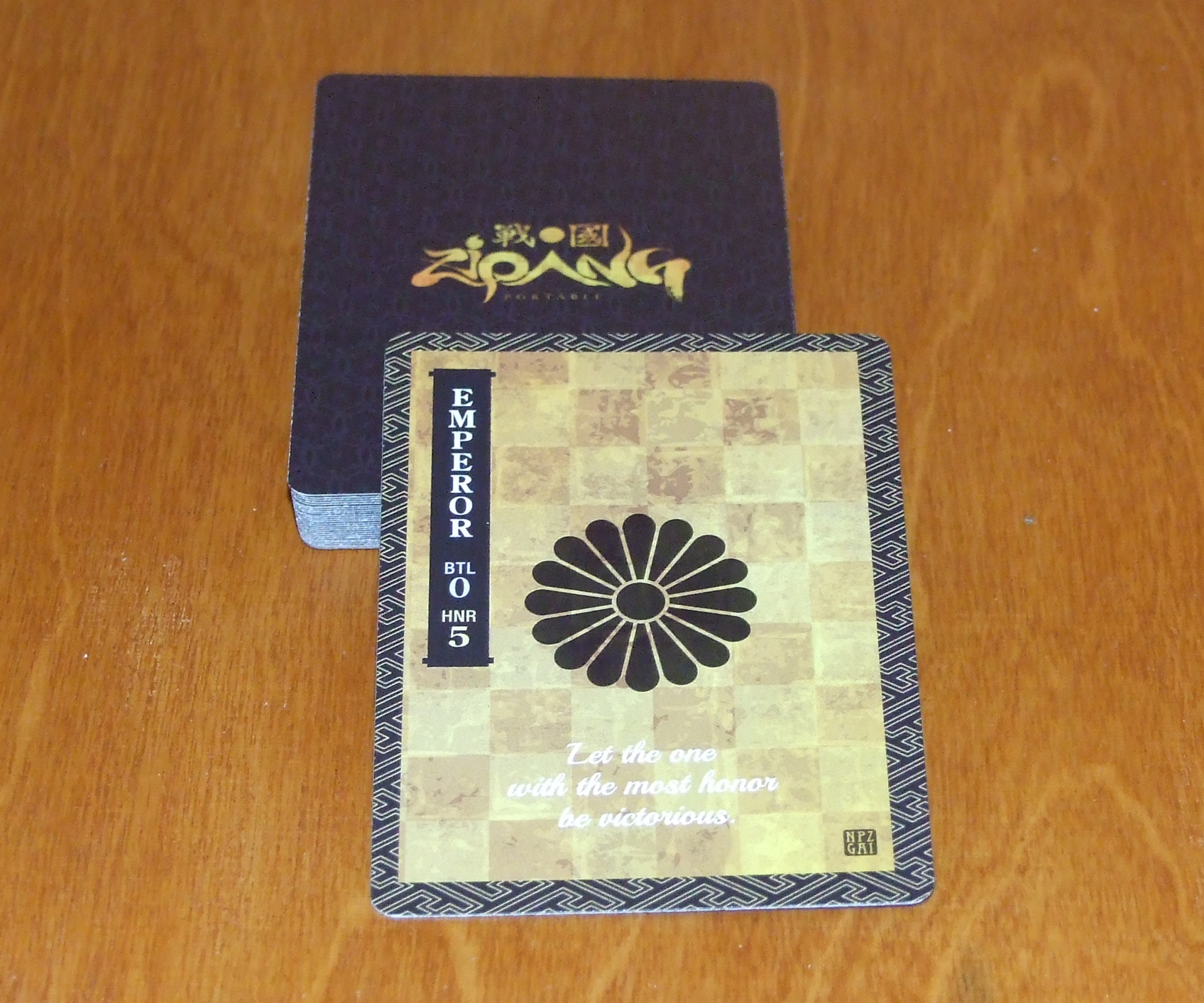 Zipang is a really good filler – a small, quick game working as an interlude in-between bigger titles. It won indie developers “Game of the Year” award at Gameacon 2016. Somewhat resembles Love Letter in its simplicity and swift gameplay. However at the same time it offers greater complexity, range of actions and balance. Despite quite significant randomness of the deals, we are not limited to one right course of action dictated by drawn cards – we have a choice of strategy and a way to defend ourselves if necessary. Altogether, the game is consistent and climatic in design, most often we’ve played it with Yoshida Brothers’ music in the background, which complemented the ukiyo-e style and the game’s theme well. Zipang Portable can be played by 2 – 6 players – in the spirit of “the more the merrier” the game improves with the number of people. The entire gameplay may span from 10 to around 30-40 minutes. Unfortunately with two players it tends to get longer. At some point for two-person game we implemented a house-rule that with each campaign we enter for one additional coin. If one player has less coins that required  at current entry level, the other simply evens out the pool. A minor change which, according to the people I’ve played with, improves a one-on-one duel. There are fillers that can steal the night – this is not one of them, but as a solid game it will always find a place on a table or a lap during recess, travel or a lunch break. I stress that the reviewed version is a prototype and its Kickstarter campaign hasn’t started yet. At the same time I encourage you to follow its further  course and to support it when the campaign takes off. For more  information visit www.Sengoku-zipang.com