Born from a lotus flower grown on the lake placed in the navel of sleeping Vishnu, Brahma, the great creator, wakes up, and each of his four heads embraces space around to make brand new world. Take the role of one of the elements that will influence the shape of the universe in Space Editor.

Kickstarter campaign for this project is scheduled for September 13th to help bring Tactical Games first product to board gamers over the world. People responsible for Space Editor are Yota and Yuyu Suzuki. The copy that I received for this review is a prekickstarter prototype, so keep in mind that the final look and some details of the mechanics may change. You can follow this project on its website – SpaceEditor.net 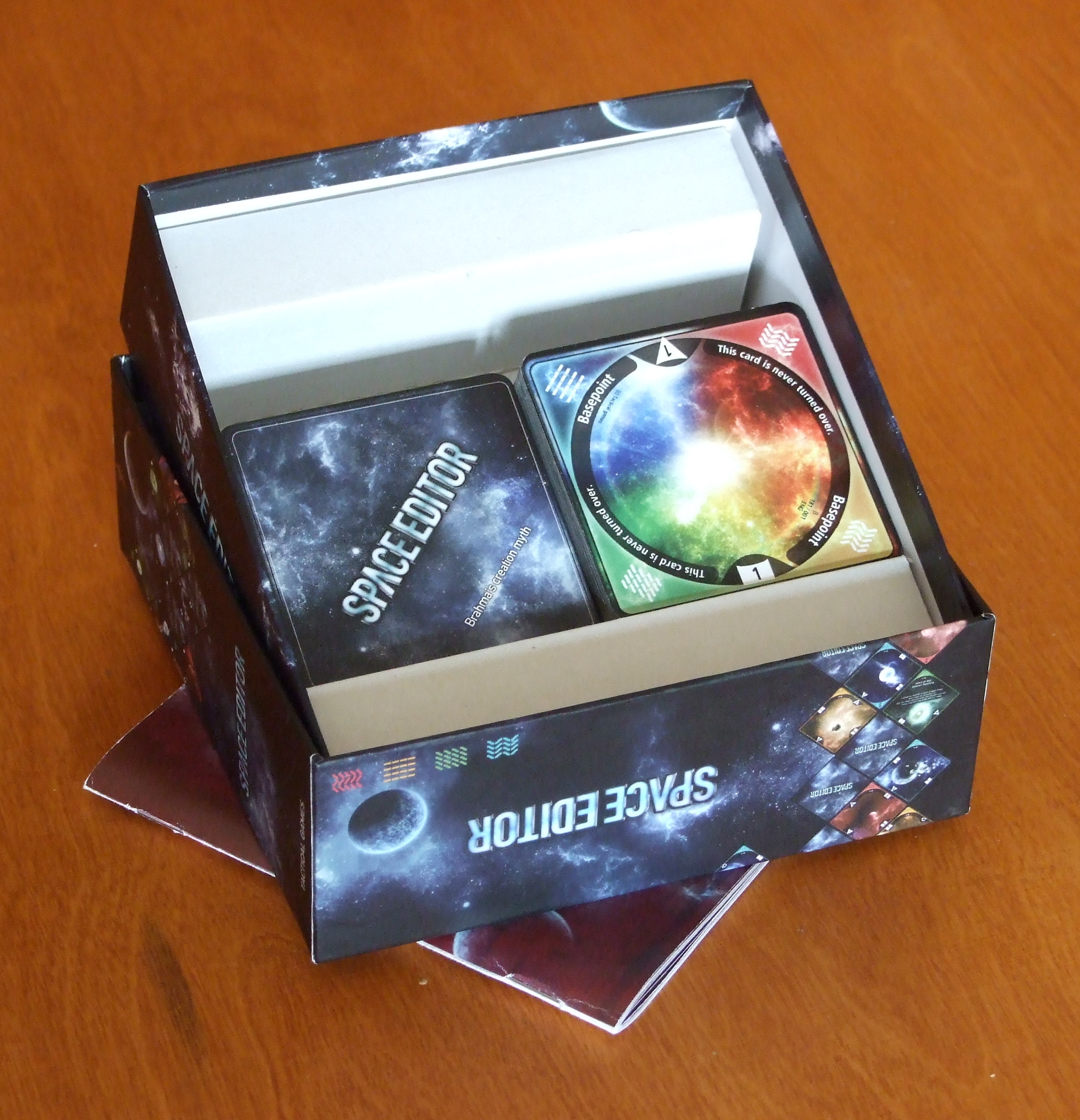 We’re getting a small, neat and durable box with a cardboard insert containing basic cards. In the box there is enough space for us to comfortably place sets planned for future expansions. In the basic version we will find 24 square cards for each element and a Base point card. Cards are quite rigid and durable. Still, because of the “tiled” nature of the game, and frequent shuffling due to fast game play, it would be good to sleeve them up. The game is illustrated with beautiful artwork of the cosmos, and has a very clear and consistent layout. The only element that can be a little unreadable is information about the card Id number and the name of set it comes from – but it does not affect the gameplay. I also received a set of extra cards, 21 for each of the elements, that will allow to build some custom decks. 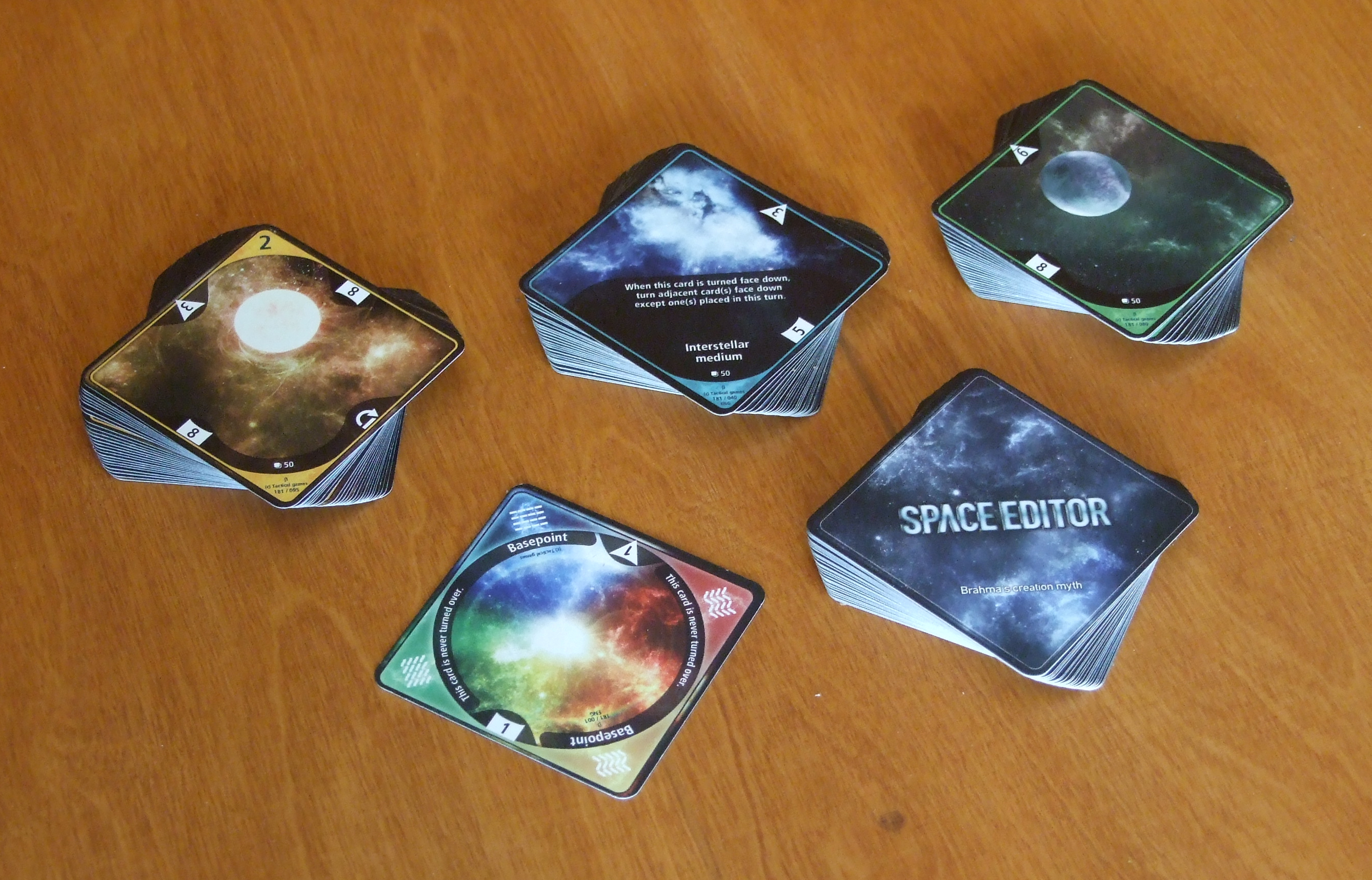 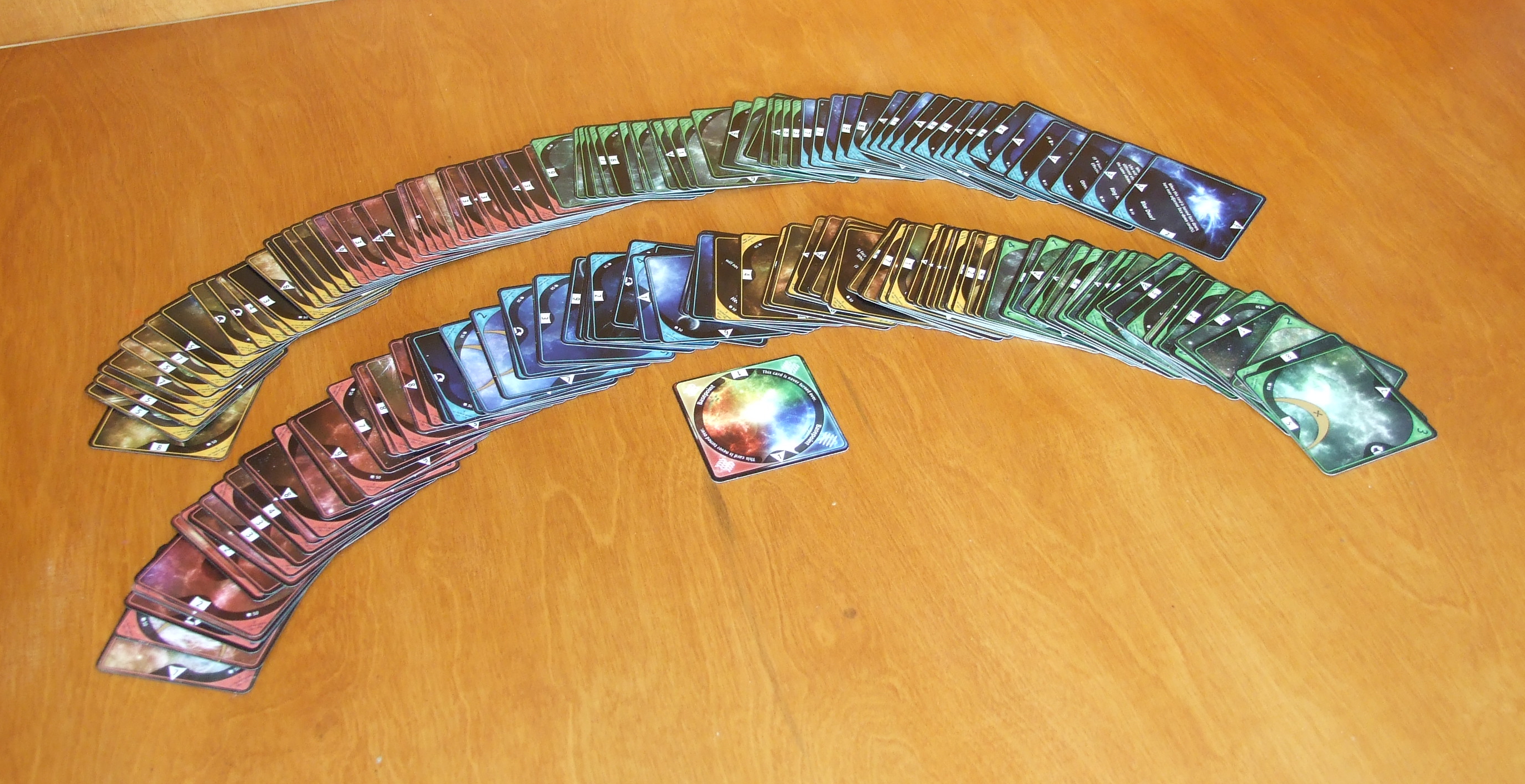 Game setting matches the game mechanics really well, but it does not change the fact that this is basically an abstract game which aim is to gather the highest number of victory points. Available cards, beside basepoint card with which we will start our universe, are divided into three types:

General mechanics involve placing cards to existing grid of cards so they fit in and interact with each other – where each edge of the card may have several symbols on it, or be blank. These symbols interact in some ways, causing the card to be turned upside down. When the back of the card is visible, each of its edges is considered to be blank. When we play, it is important where the base point will be placed, because if a card has to fall off the table – we can’t play it there. Limiting field of play that way also adds a strategic element, of course unless we play on the floor. 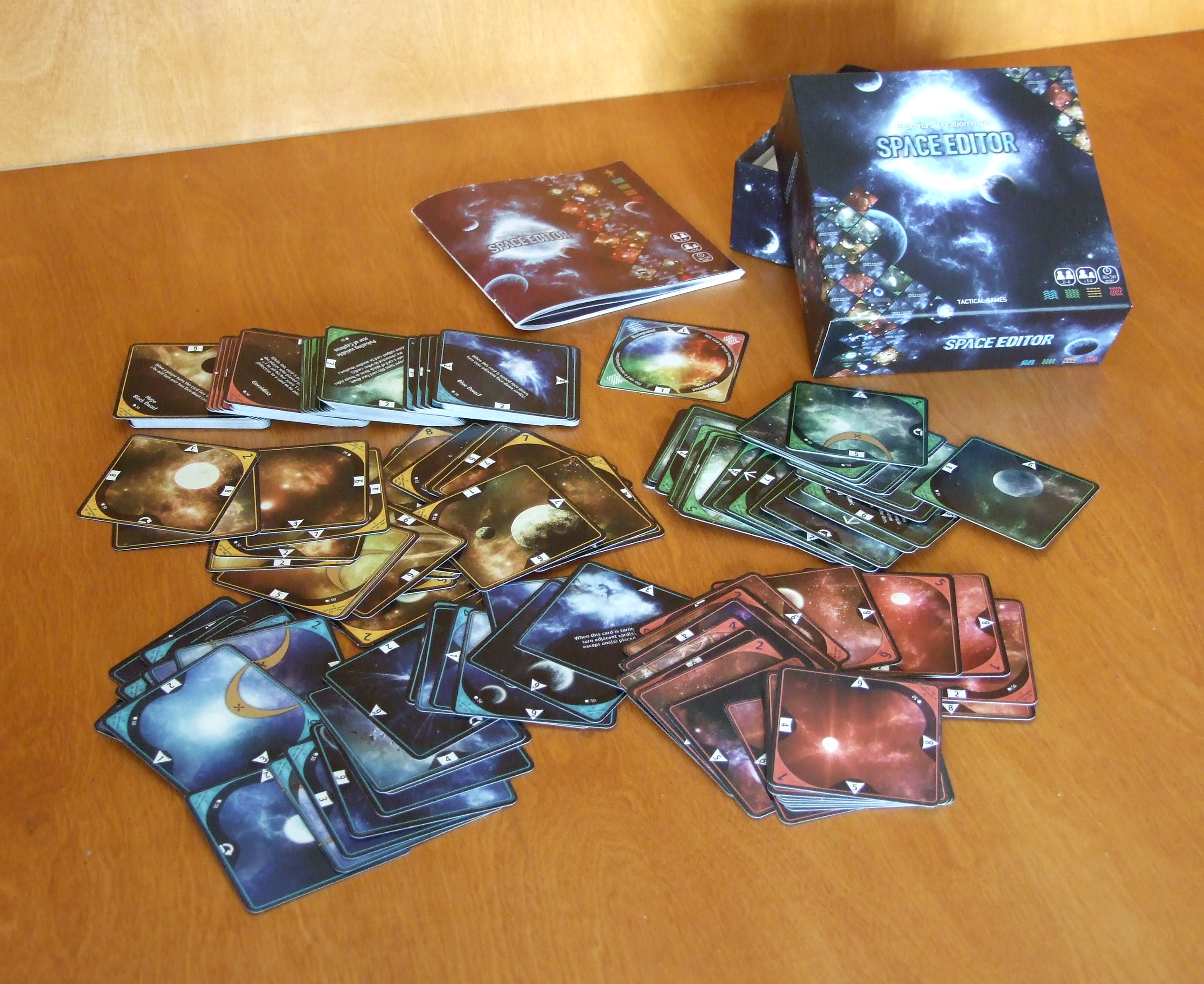 Space Editor lets us play the game in two variants. First option is named “half game”, and it can be played in group of two to four people. Each player gets the deck of the selected element (fire/ water/ earth/ air), we start with two cards in hand and at the end of our turn we will be drawing two new cards. On his turn , the player must play one card and discard the other. When we play cards, we have to add them to an already existing grid of cards (starting from base point). When we add a card somewhere, we do as much damage as we can to other players and at same time protect ourselves- in addition, the card must meet several conditions so that it can be placed. When the players have no more cards to draw, game ends and we need to count the points from our cards. This variant is very light and has a random factor, but the randomness is not frustrating and one play can fit even in 10 minutes. I would recommend it to get a better idea of ​​how cards are working, what is  the weakness and strength of our element and how skill cards are triggered. Quite pleasantly fits into the role of the well-crafted filler – game to play when you have some time to spare or want to have fun playing in between heavier games.

For the second variant “full game”, we take part in a one on one duel. Each player starts the game with four cards in his hand. In your turn draw one card and play one, meeting the conditions of play as in the first variant. In this version, one play can last less than an hour. Randomness is limited and we get a lot more options for planning our strategies. Despite the increase in time needed for a player’s turn, the downtime is not very perceptive, because each player is involved in keeping track of changes on the board and planning a few moves forward. Thus, this variant is taking his place in mind-bending spectrum of strategy games for two. 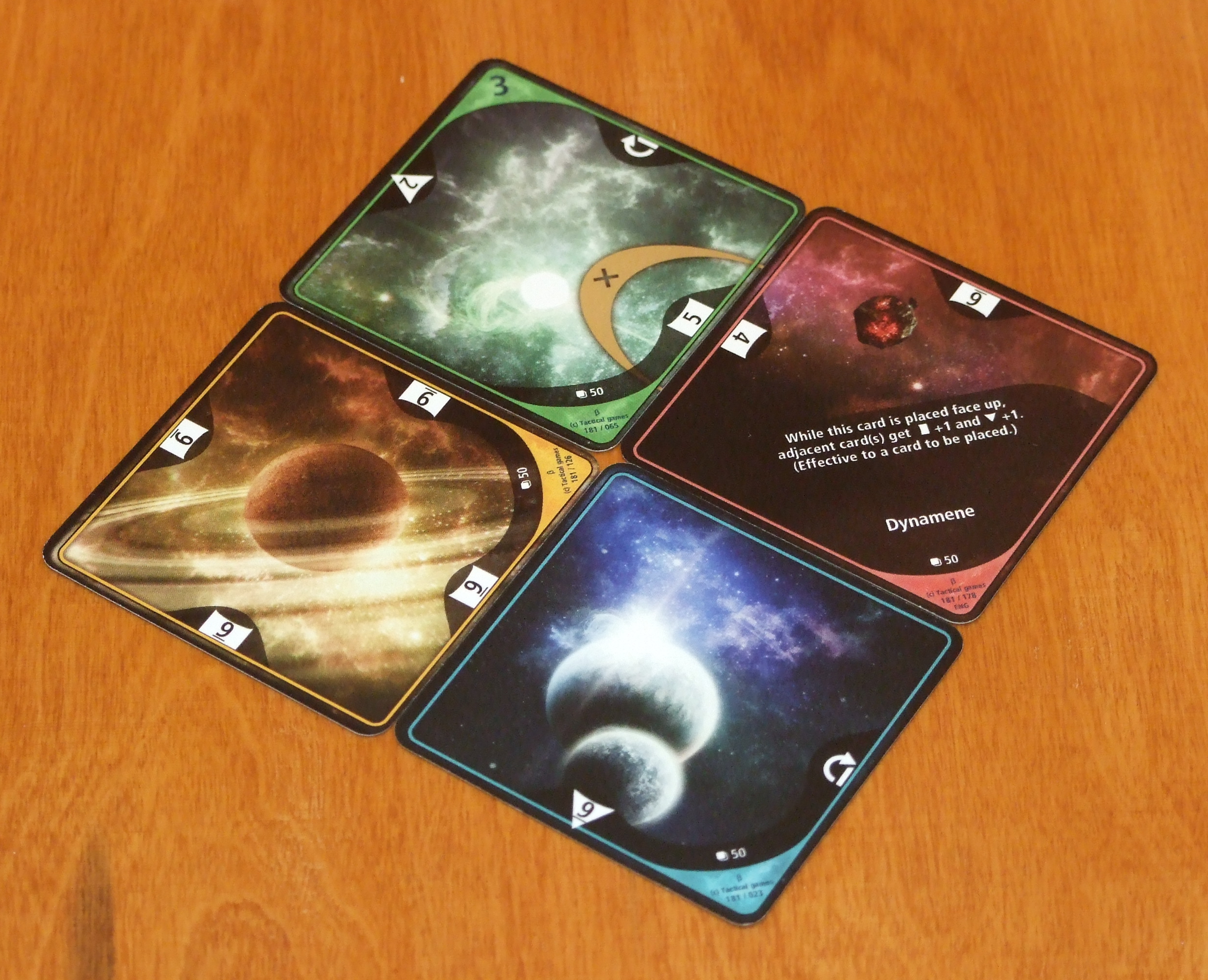 The potential of the game grows more with the deckbuilding option. Each card has a printed cost. In the reviewed copy, the costs were not yet assigned, so I can only give a brief overview of how this variant should look like. Namely, every player decides on which element he will play, take all available cards of it and starts his build. Sum of victory points on added to deck Star cards need to be is in the area of ​​40, and the total cost of the cards should be in the range of 380 to 420 points, each card Id must be unique. You can play deck built this way both in the first and second variant. Thanks to this, the game is allowed to be further developed, while not forcing the player to buy several copies of the game. When comparing the basic and additional set of cards, you can see options to balance the direction the deck can take, depending on the player’s preferences for a more offensive or defensive style of play. As for the balance of cards, at least for the time being, it seems to be leveled up, but I will be able to tell you more on this topic from time perspective. 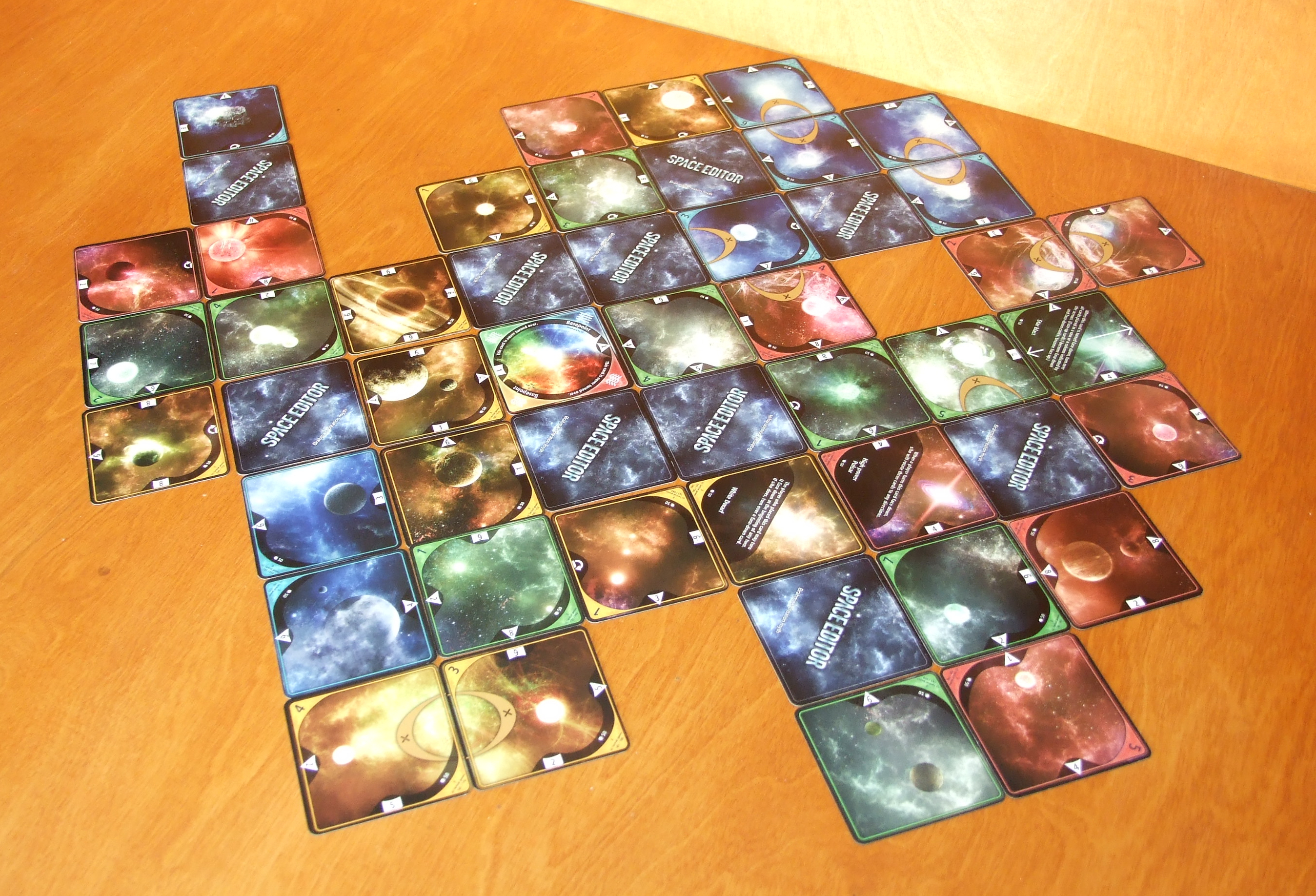 I really like Space Editor. In a small box we get basically two games – a lightweight, fairly random filler, or a nice, strategic mind-bending duel. Due to the small size it can always be carried with you. With the deckbuilding option and future expansion sets it allows you to explore possibilities of each of the elements. Each game looks a little different – thanks to asymmetric element strengths and weaknesses,  and different base point placement we get lots of replayability.