Winter is coming down from the silent mountains, and our little ones are white around the gills. Today I will tell you about a game, where as one of bearded shorties clan we will clash with other dwarves in autumn gail.

Dwar7s fall – published by Vesuvius Media created by Luis Brueh in 2016. Author is also the artist behind gorgeous graphics you can find in this game. Encouraged by positive response with few suggestions  about how rulebook is working they decided to launch Kickstarter campaign for second – improved edition with expansion set. Currently successful campaign is over but you still can make a late pledge at its page. 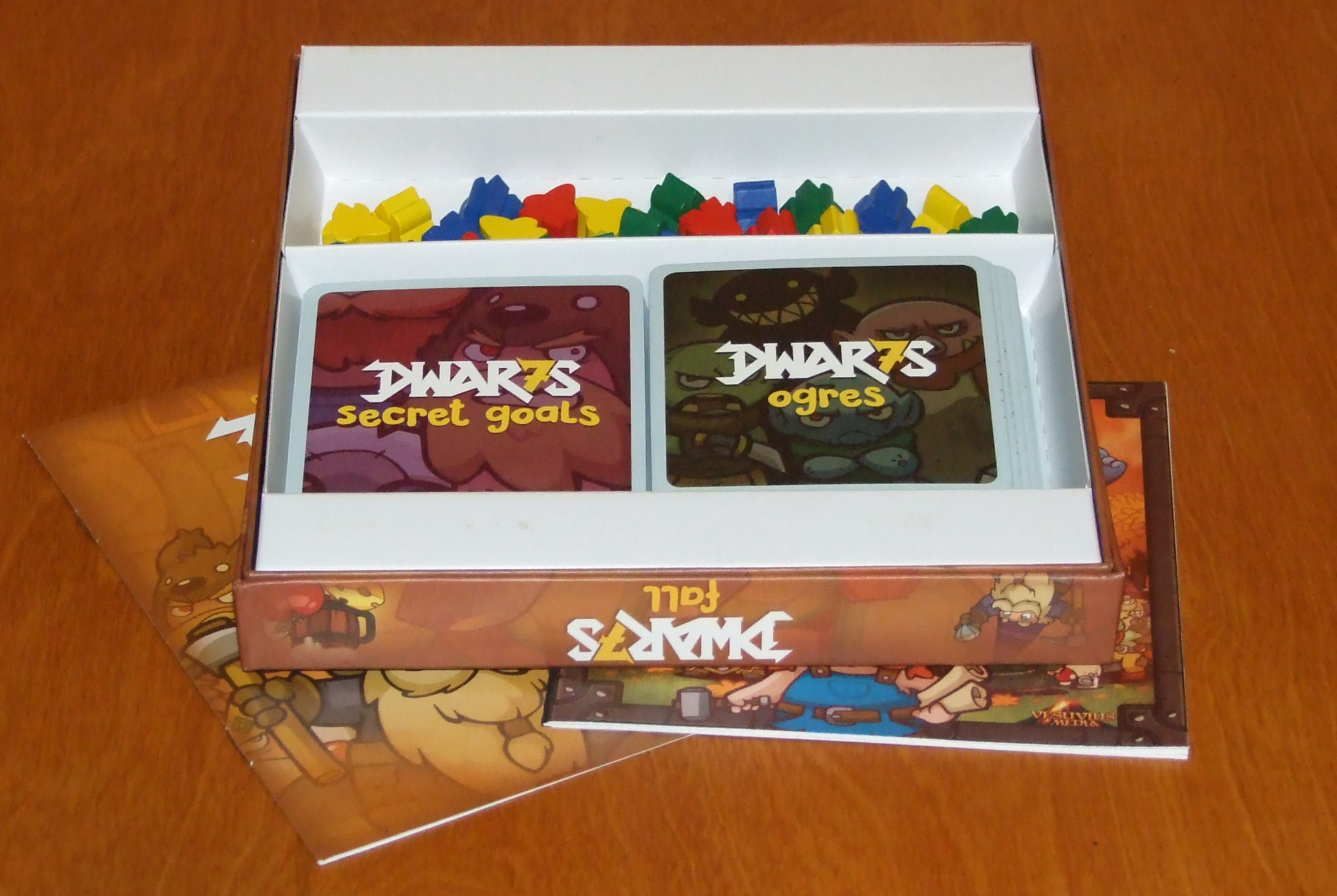 For this review I received the first edition of this game. Component quality of 2nd edition is supposedly same as 1st, there are only some changes in the graphic design. Small box, almost perfectly fitted for how many components we get, holds inside 100 stiff cards (8 x 8 cm), in quality they are similar to Jungle Speed cards. Next we get 28 meeples in the shape of our bearded pointy hatters which really looks like sweet little dwarves, and the last component is the rulebook. 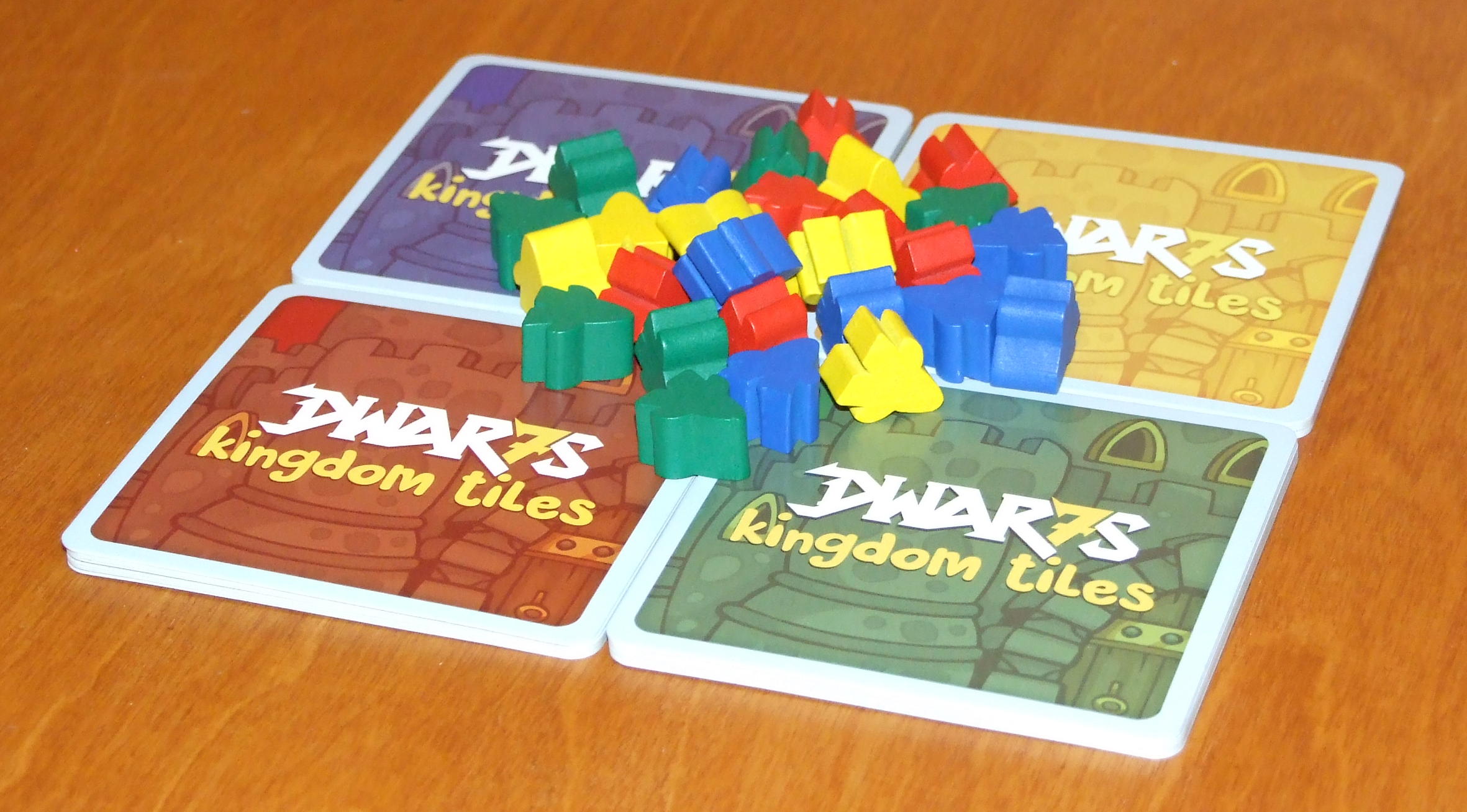 Most of the differences between editions goes to graphic department, in 1st edition  there is some text on each side of cards. In 2nd edition we got all of this changed to pictograms on faces and icons instead of deck name on back sides. On one hand, this is a nice improvement, because now we have completely lack of language dependency – now the only thing you need is the rulebook in your language and you are ready to play. On the other hand, this can be troublesome for owners of 1st edition of base game, since difference in what is on reverse of our cards we can’t just mix it with expansion which is only available in new edition graphic design. Some kind of solution for this could be getting a pack of card sleeves with nontransparent back. 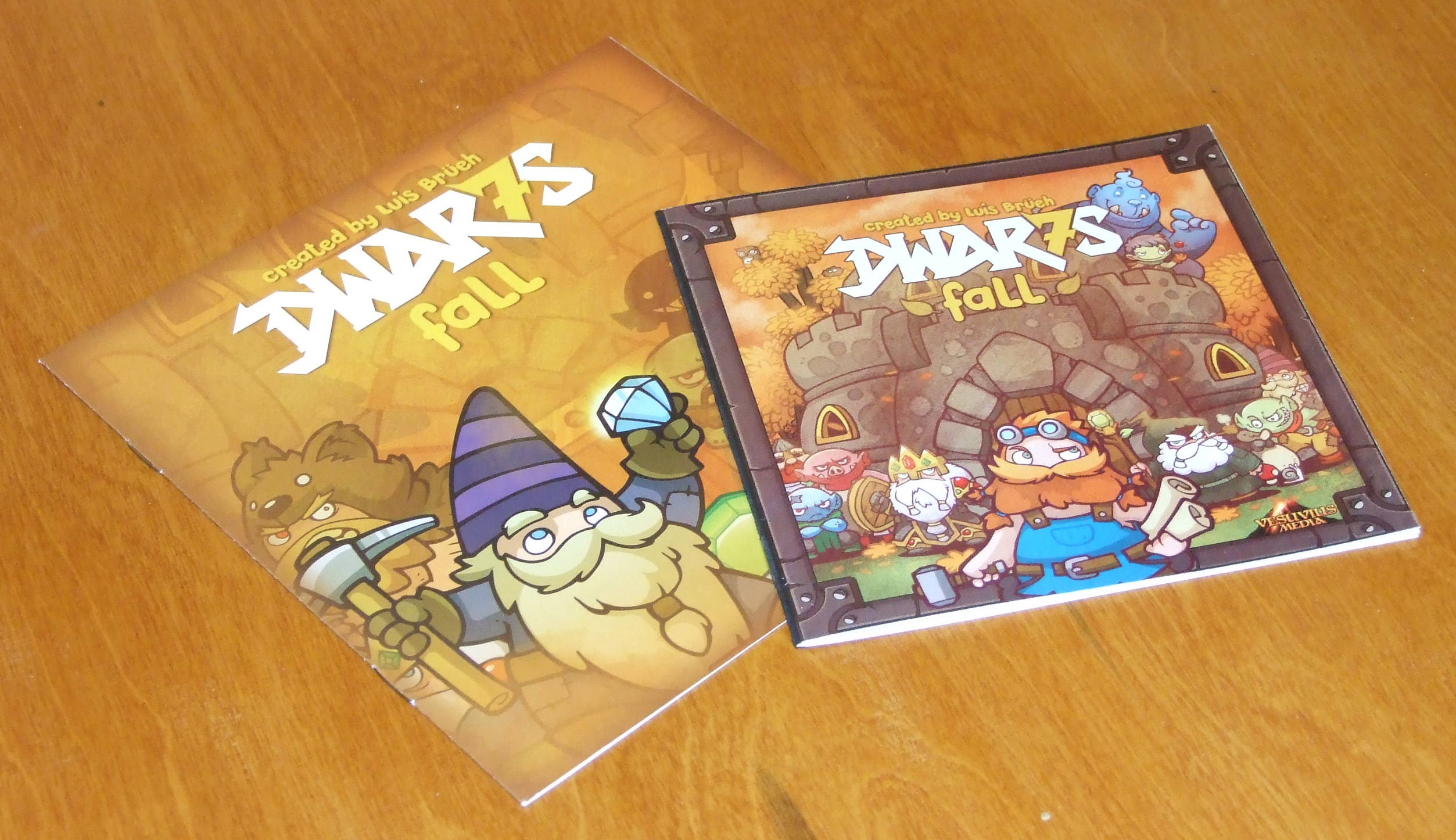 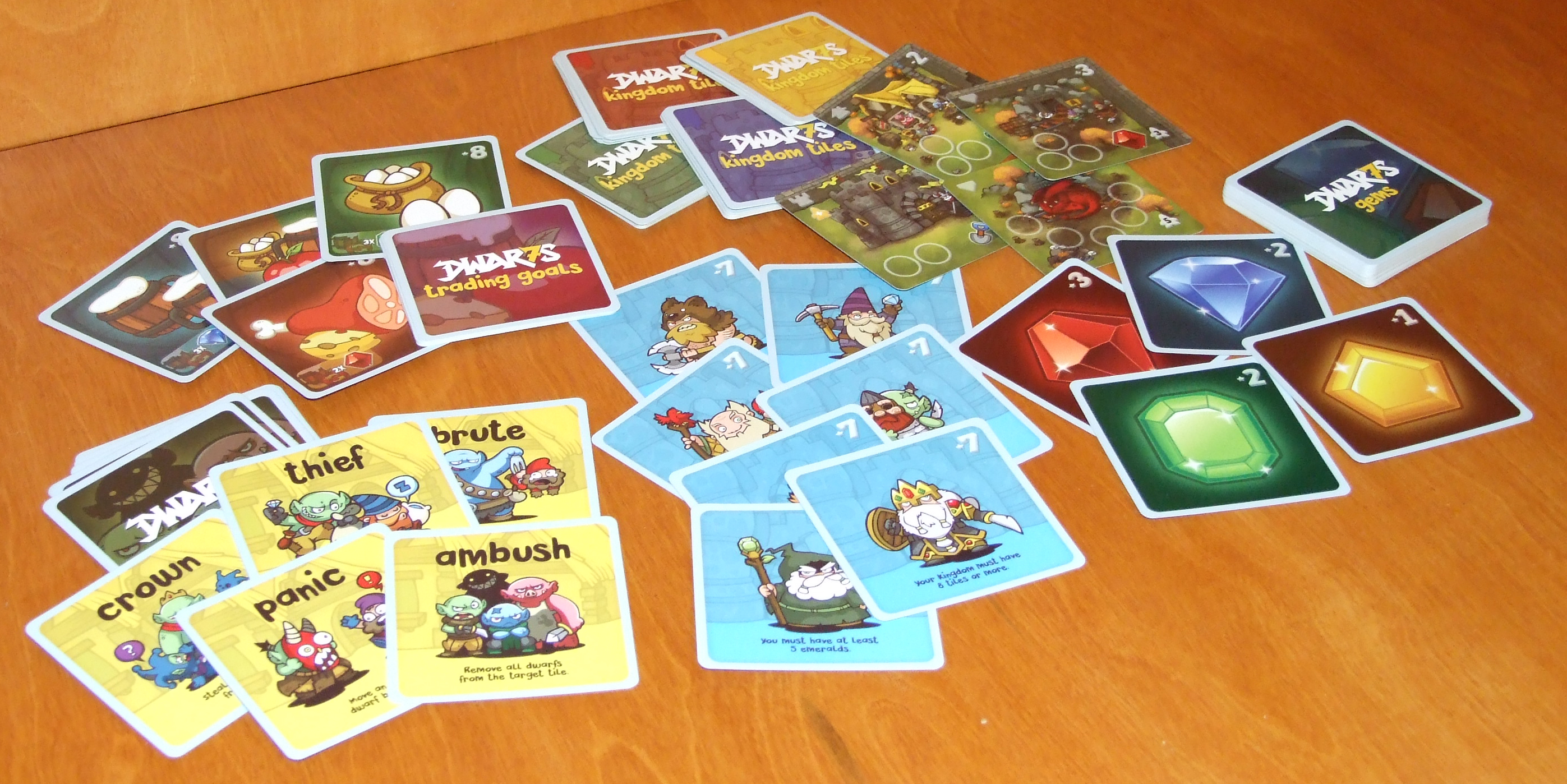 All text description of how cards are working are put in the new rulebook, and in comparison to older version clarity of the rules really is improved, now after reading it you have no questions about how something works. If you are the one who would also like to have the expansion, you will get it in a second box, components expanding the number of players to 7 (in base game it’s from 2 to 4). Ogres, Elves and Crystal Dwarves are about to join this food struggle of our basic 4 dwarven clans. Beside that you will also have cards that will expand basic decks. When making a pledge it is also about things you can get from KS unlocked goals – and here backers unlocked all of them: decrees, scenarios, playmat, new dwarven classes, and stickers for your meeples. Game in total – base game, expansion set and KS goals with pack of 300 protective sleeves cost 56$. 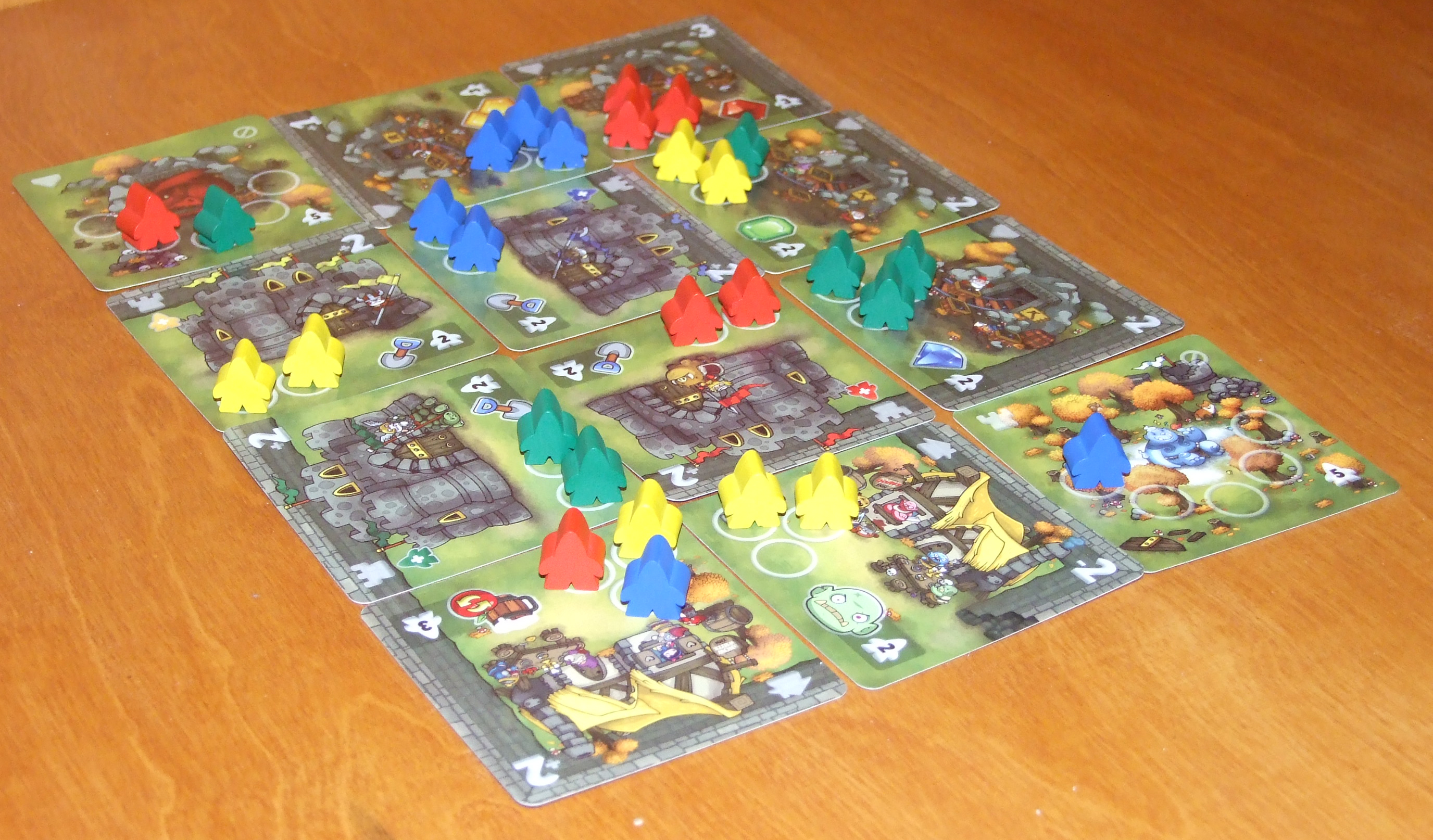 Mechanically the game is splendid. Rules are simple: in your turn you can play any number of ogre cards and do up to 3 actions that range from playing kingdom card, placing your meeple on one card or move meeple from one card to another. After you are done with your actions, resolution phase comes into play and you simply gather profits from what you played. The game ends when anyone gets at least mix of 3 goals done. In the beginning of play everyone gets theirs kingdom cards, 7 dwarven meeples and 1 secret goal card. Trading goals are those additional goals that we can earn by exchanging our precious gems at the general store, and gemstones are gathered by mining. 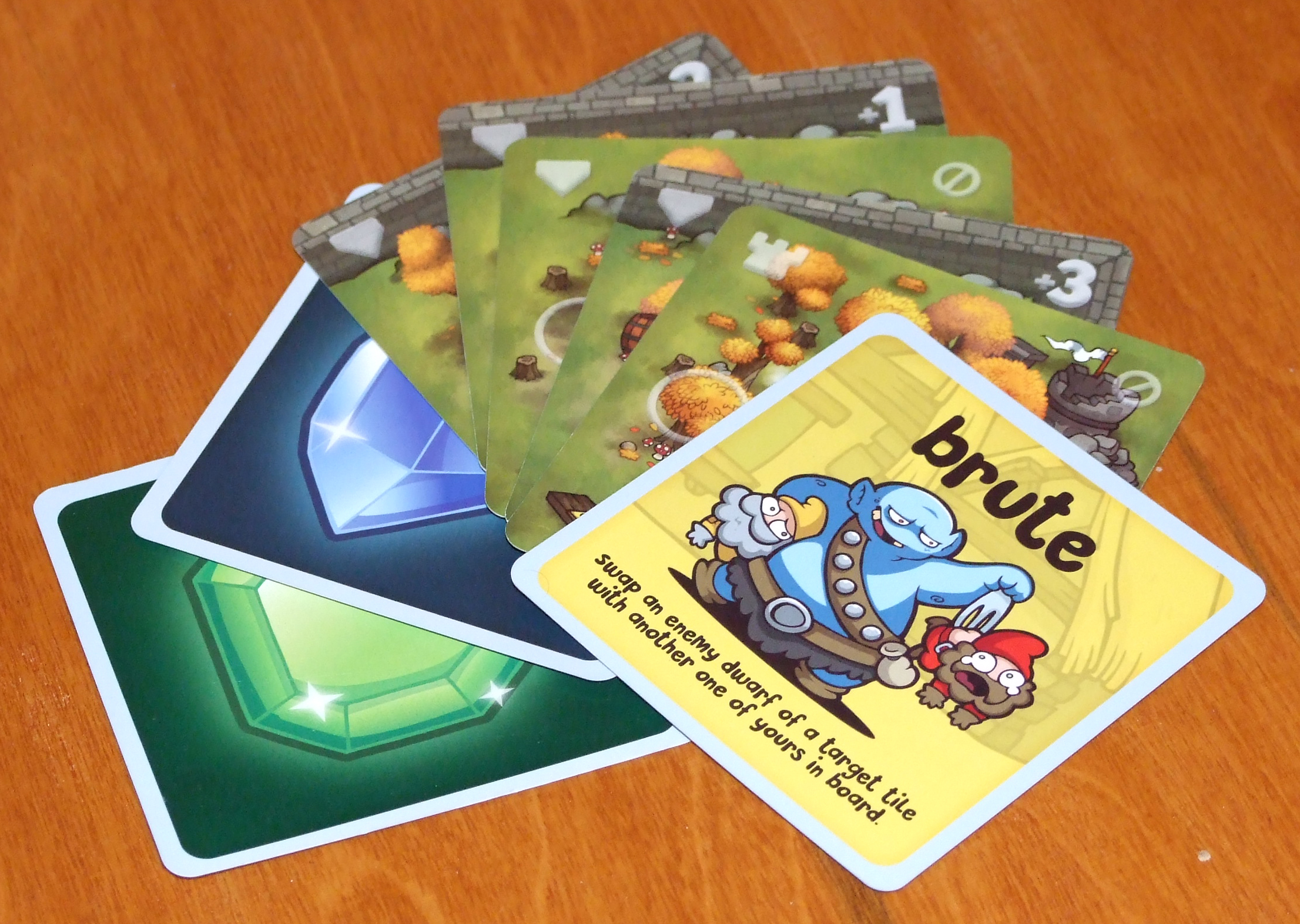 On the whole Dwar7s fall is a neat mix of worker placement, tile placement and direct negative interaction with victory point pursuit. You earn points for building your kingdom, completing secret and trade goals, gathered gems and slain beasts. It’s a well known fact from life of dwarves, that they never fight with each other so our dirty deeds to other players’ meeples are done by ogres hired at the tavern. Other possibility for hurting opponents is when we take our kingdom card and place it over someone else’s tile of the same type, it serves to expand our kingdom within its walls.  Of course our opponents can dig up their tiles by respective action and engage with us in an endless struggle whose tile will be on top. KS goals and Expansion adds royal decrees and scenarios to the gameplay. Each of royal decrees in play changes a little how the specific kingdom tiles will work, and each scenario puts in play specific set of royal decrees. Last thing modified in mechanic are addition of dwarven classes (king, warrior, guardian) that works as a level up for our plain worker dwarves. All these additions will add to enormous replayability that is already in this game. Depending on how many players are in the game, it can take from half an hour in 2 player game up to 90 minutes when playing in 3 or 4. I didn’t have a chance to play in a 7 player game but I would assume that it will extend gameplay up to 2-3 hours. 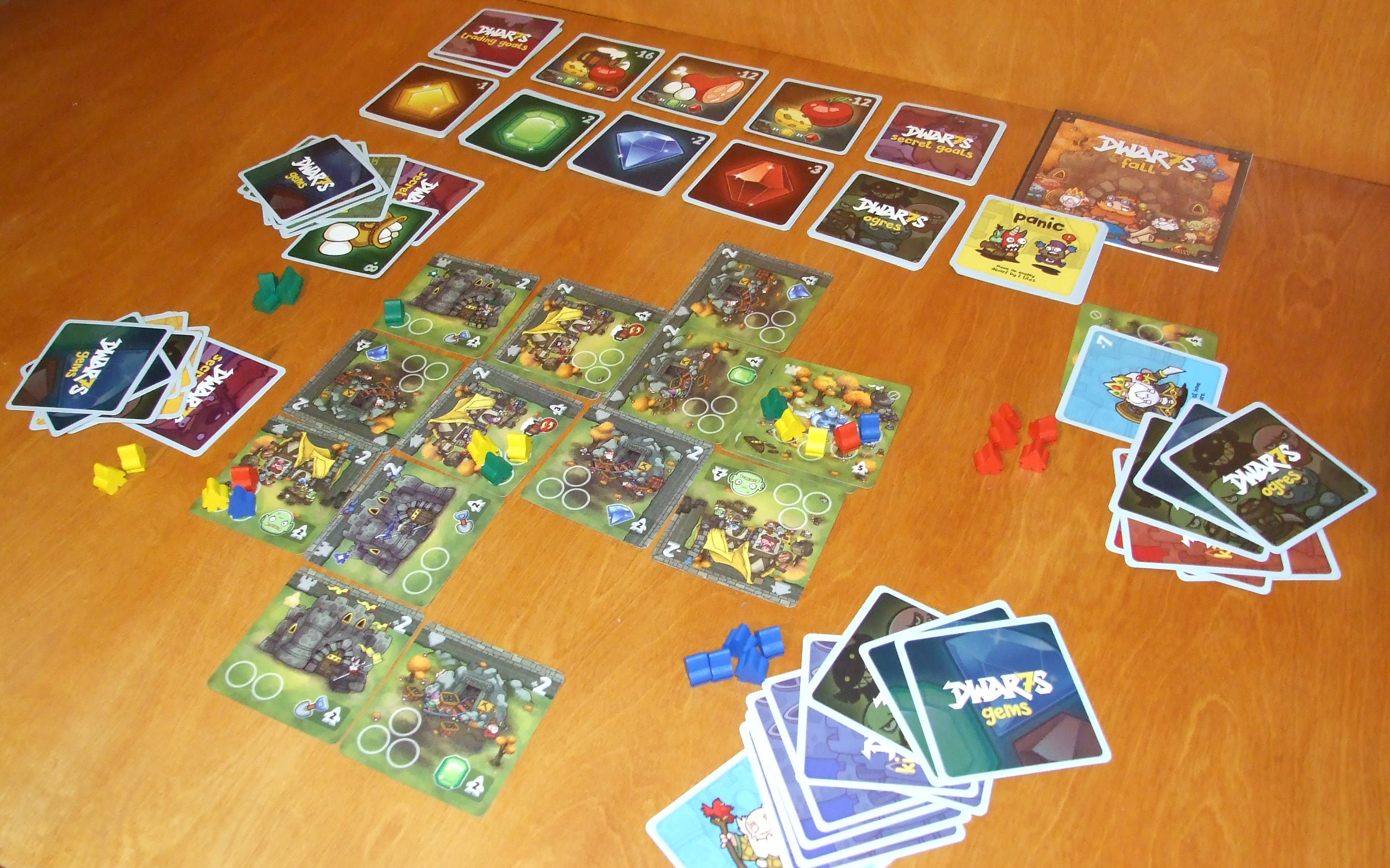 Don’t be fooled by all cuteness and sweetness of illustrations pouring from all the components. Dwar7s fall is as subtle as stabbing someone in the back with a two handed axe, while you force it until you can see only wooden handle sticking out of the back of your victim. Spoiling each other’s plans, blocking enemy’s movement while strategically planning how your kingdom should look. Setting ogres on someone, crippling their mines and castles by sending to them dragons and snow giants is just a few of many things that we can find here. To add some spice, imagine that when you win, all the rest of fighting clans are condemned to death by starvation. Direct negative interaction is in fact the only type of interaction between players I want from the game, and here I’m getting piles of it, like piles of all those gems mined by greedy mongrel. I encourage you all to play this game to looped song “I am a dwarf and I’m digging a hole” – it will be an exquisite experience. I’m also encouraging you to check KS campaign site and use that blue “late pledge” button because game is worth it. 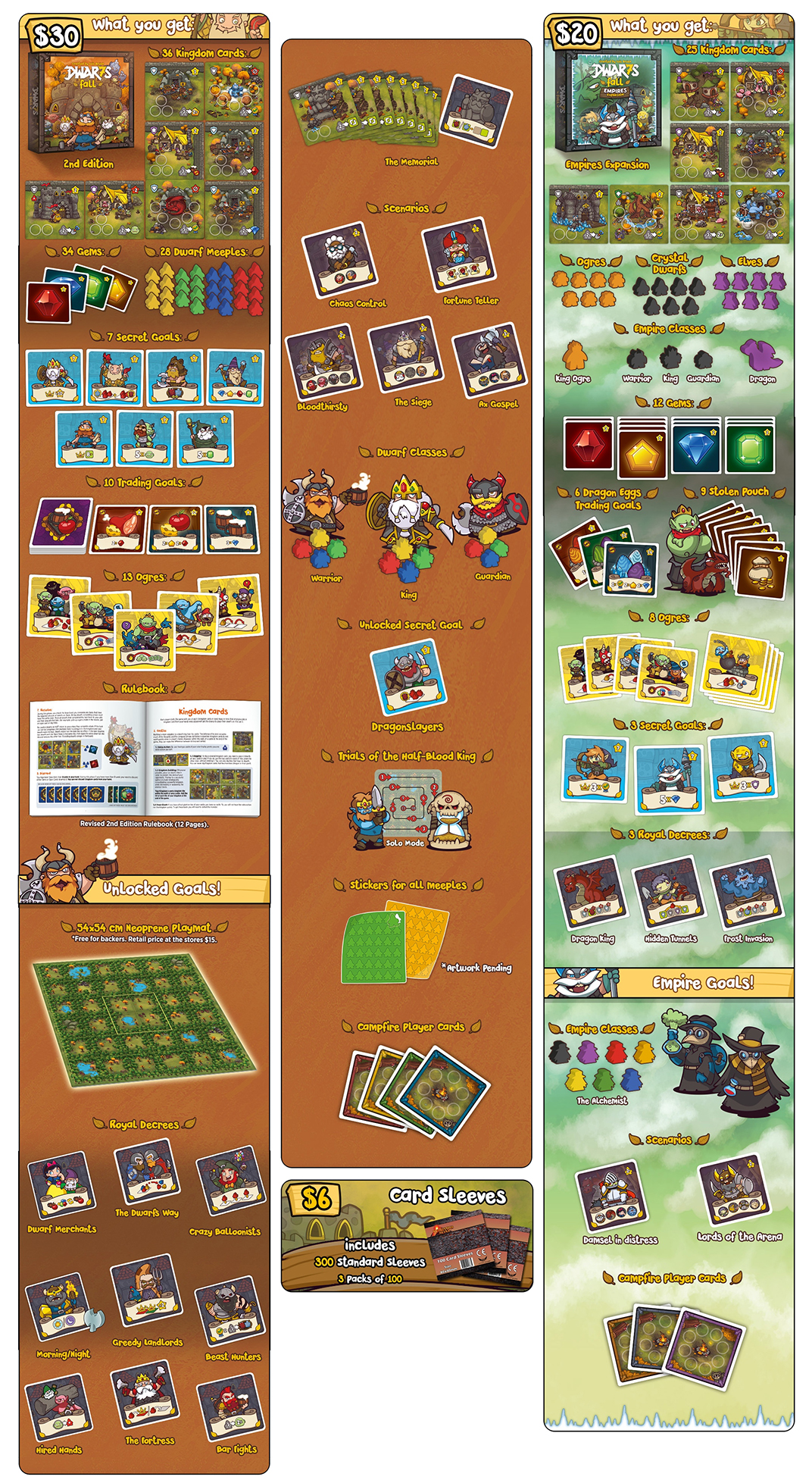