“Don’t let yourself get attached to anything you are not willing to walk out on in 30 seconds flat if you feel the heat around the corner.”

Gather a crew and run a marathon of ripping out safes in the city. Grab as much gold bars as possible, then turn tail and run. In a nutshell this is a cooperative game with limited communication, called Rob’n Run.

The designer of the game is Michael Luu, winner of “Spieleautoren-Stipendium 2013” – a prestigious scholarship for designers awarded for presented game concepts. Rob’n Run is his debut on the market, published by PD-Verlag in 2017. Illustrated by the trio Marina Fahrenbach, Thomas Hussung and Dominik Mayer. The game does have a German and English version, and its linguistic dependency is limited only to clue tiles. 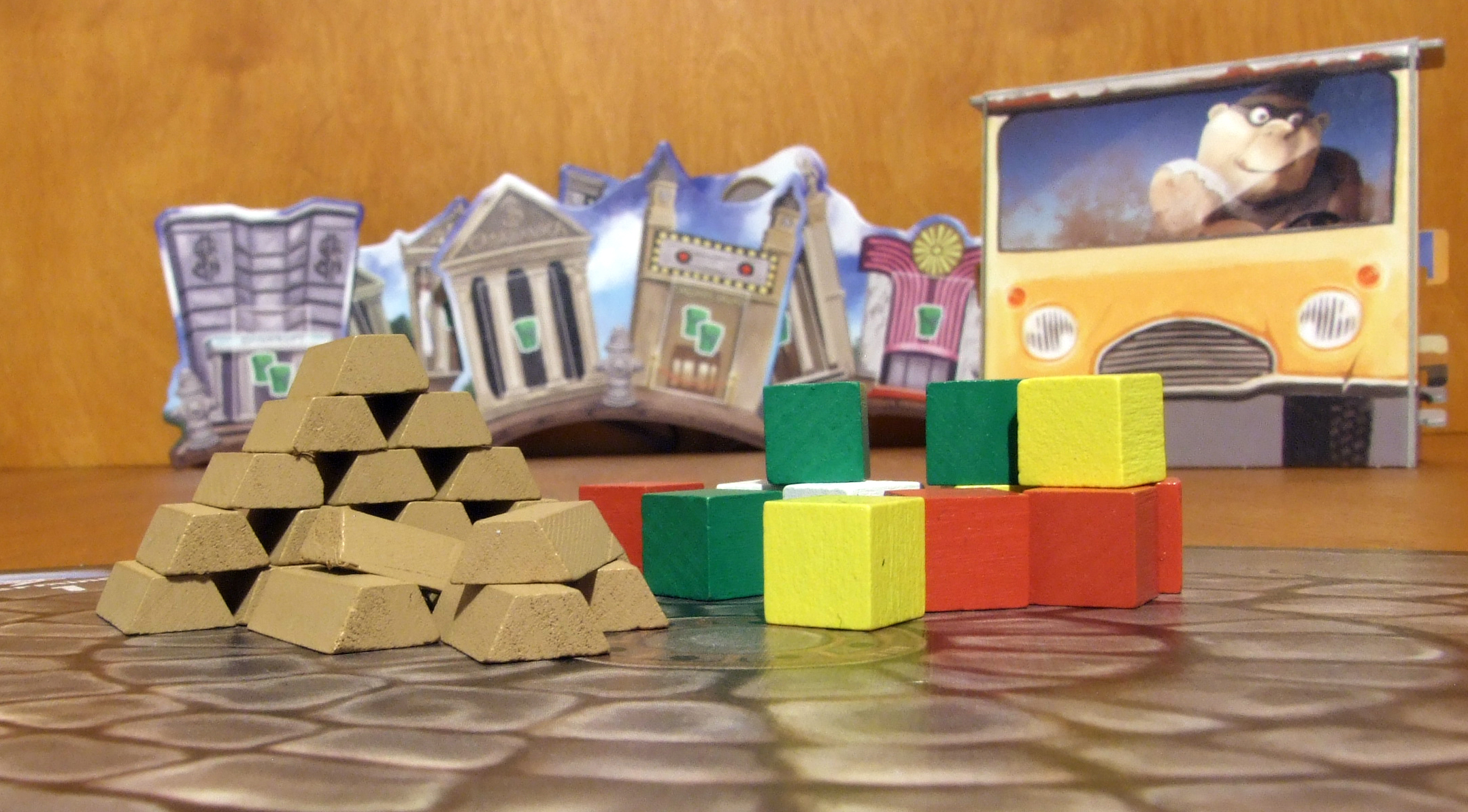 The standard-size box does not contain any insert. Inside, we will find a pile of tiles made of thick cardboard. Including two language sets of clues, safes, police station and rubbish bin. The play area consists of several boards, central with the escape route and satellite showing buildings to rob. In addition, we get two pawns – the policeman and the getaway car of our team. Four tokens of helping dealers. A deck of cards with the tools needed to perform the job, and wooden cubes of alarm levels and gold bars. The last element is a screen for the boss of the team where he will place safe tiles. It’s in a form of our “steal’o’wagon”. Everything is illustrated in a very coherent and pleasant to the eye, playful, light style. 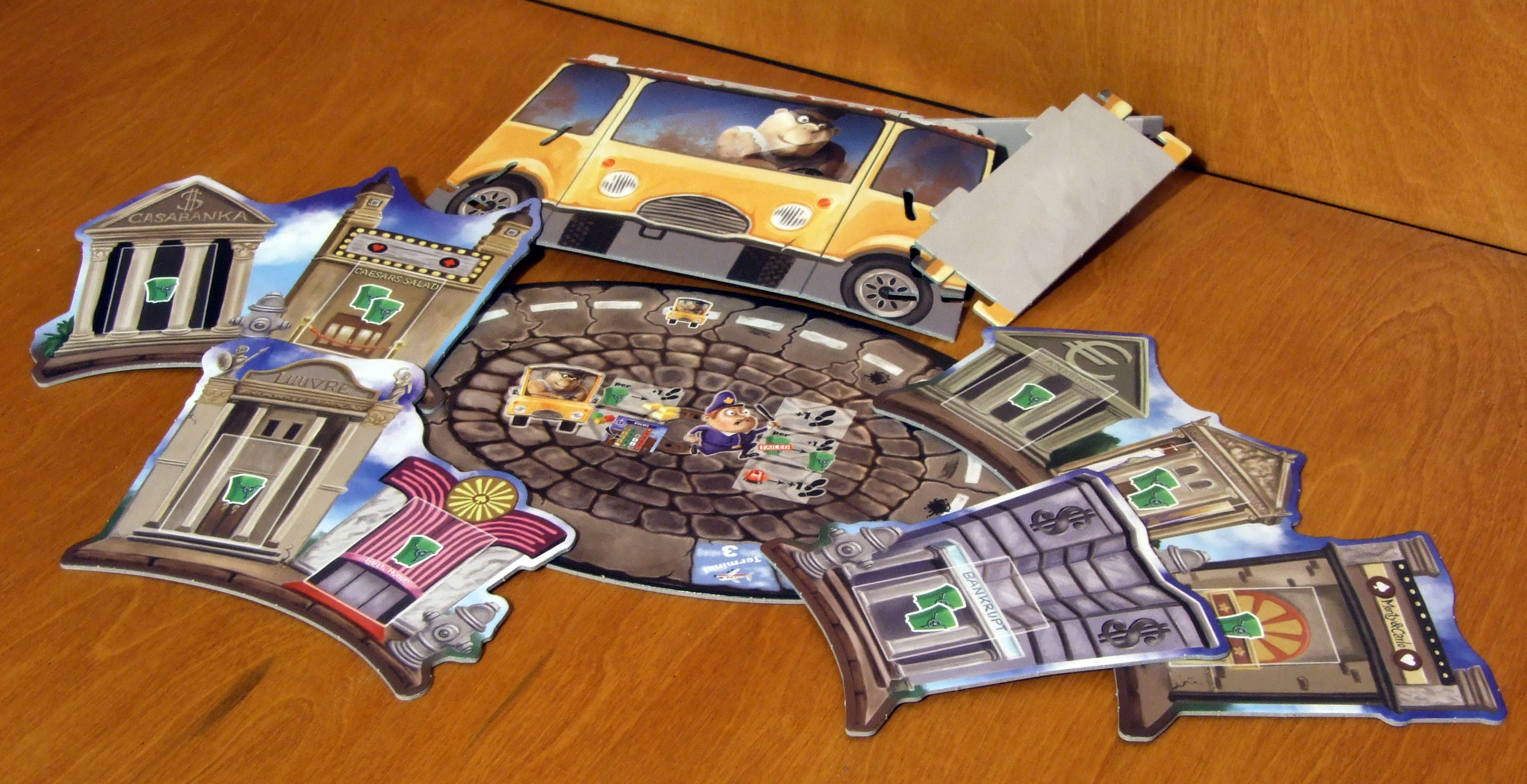 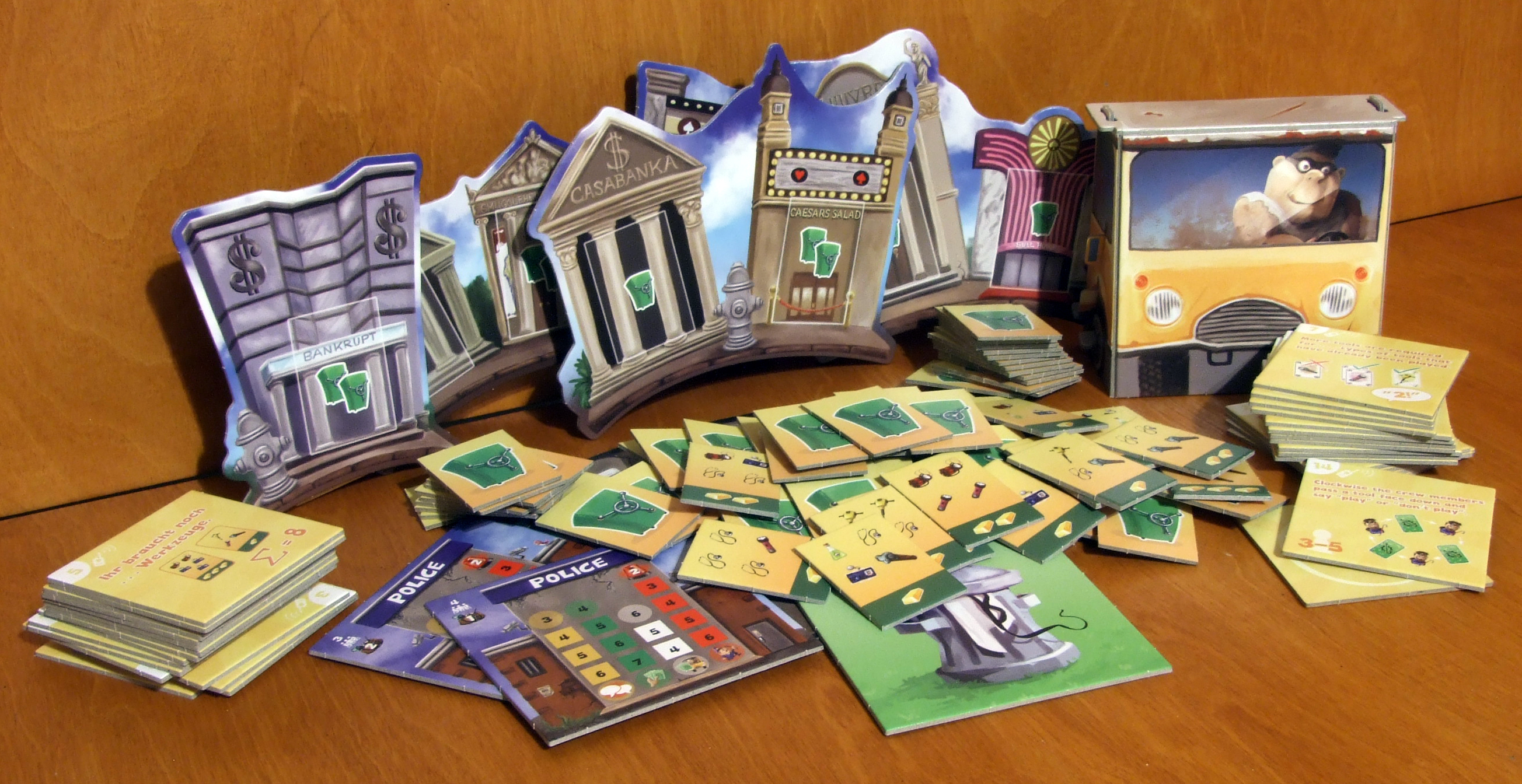 The game’s setting blends very well with mechanics. The team is working in silence to crack the safe, and the police are just waiting for mistakes to put them behind the bars. After the first game I had the impression that It looks like a scene of a nighttime job from the movie “Heat” by Michael Mann … only played by the heroes of the “Olsen Gang”. The tension when presenting hints and gathering a set of cards can get heavy, just to become comedic later while checking how good we communicated with our crew. 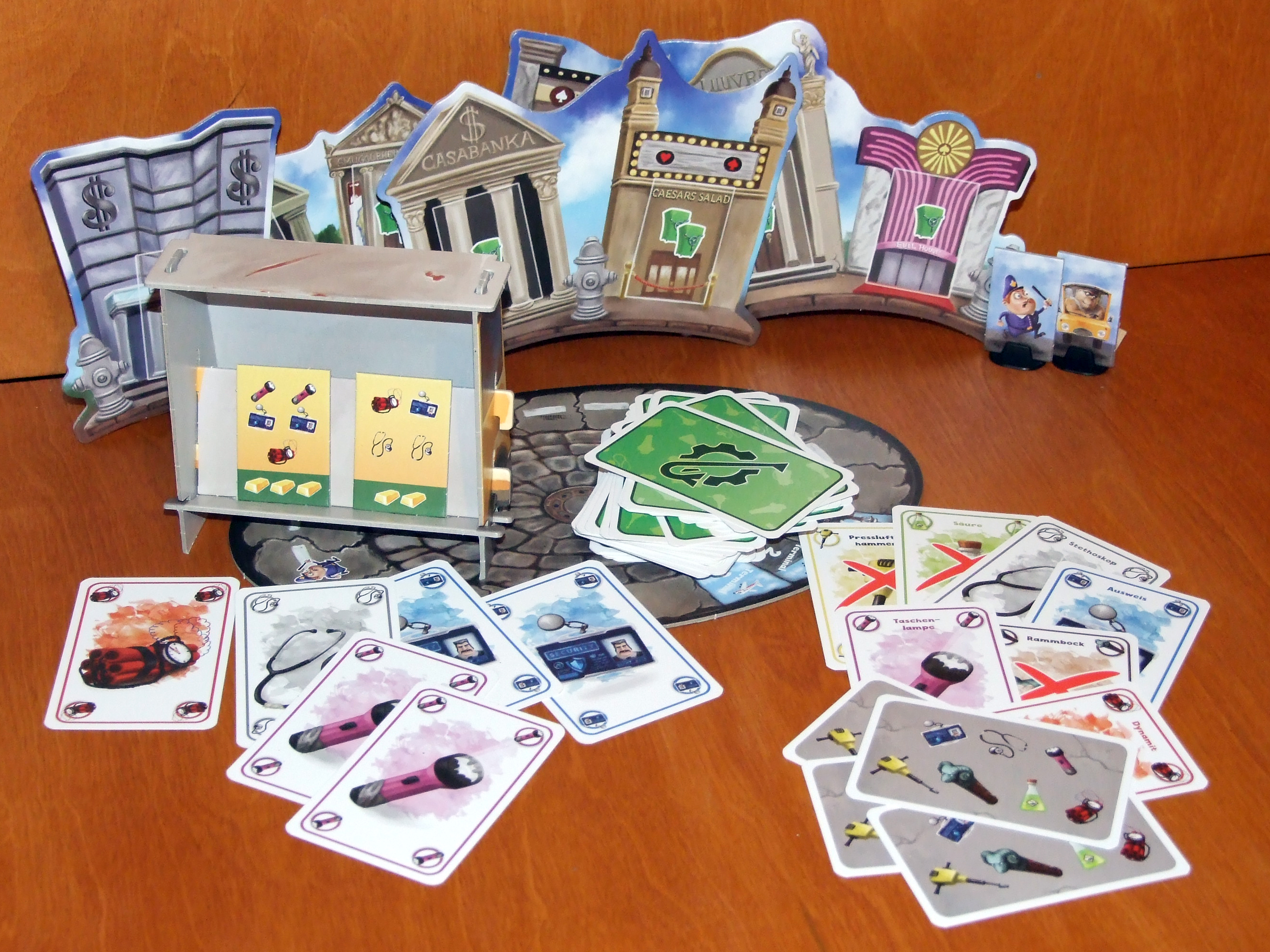 Game can be played in a group of 2 to 5 players. The idea is to collect needed set of cards using clues. In every round the boss of the team changes. The new leader chooses, from which building he will take safes to crack. Each tile of the safe has the tools that are needed to open it, and the reward we will win, if everything goes well. The leader’s communication assortment includes set of clue tiles determined by the scenario. At the beginning of the round, he may use some of them, suggesting, for example, the number and type of tools. A team listening to those tips can’t communicate with each other. Subsequent cards are added to stack implicitly, until a certain amount is collected, after which the boss from the collected pile shows needed cards and discards implicitly those that turned out to be unnecessary, making the alarm pool out of them. Then he checks if it was possible to open the safes or if alarm was not activated, if none of the above conditions have been met, he can re-add some instructions for the team and collect next set of tool cards. Once used, the clue can be used again paying 3 gold bars. We start the game with 3 bars, which we will be able to use for emergency purposes. Amount of cards that must be placed on the table, how many clues can be used in a round, how many cards in the alarm pool will activate it, and how many cards from the deck will be drawn at the beginning of the round, is decided by the tile of the police headquarters. During our robberies and escape from the city, we will collect cubes from the board that will land on the headquarters, increasing the level of difficulty – investigators tighten the noose. Every time we are emptying last safe from one of the districts, a helping dealer-smuggler-conspirator will appear on our path. A person who, for a small fee, will get rid of a few cubes from the police tile, hindering the investigation. In the center of the board, there is our escape route, on which we will move our getaway car about as many spots as the safes in a given round was open, chasing after us will be a brave police officer. His speed is determined by the sum of whether or not we will raise the alarm, how many safes we have not been able to open and ordinary successive detective work. If at any time his pawn gets to ours, we are defeated and locked behind bars. On the other hand, if we manage to reach one of the spots with the airport terminals and there is no chance for the pawn of the policeman to get to us – we run away with the gold. The amount of gold bars is the measure of our success. 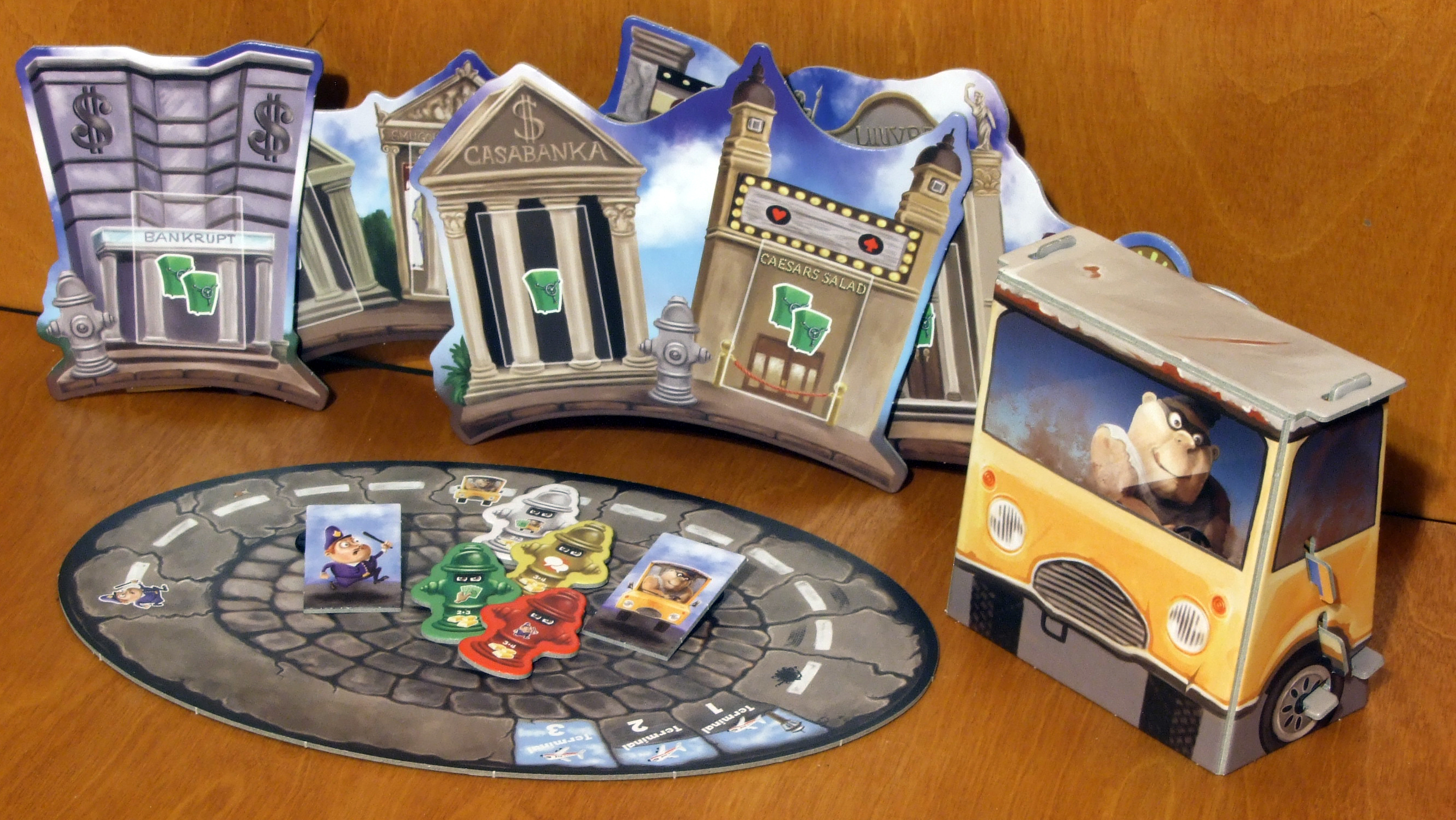 It is a very interesting approach to the cooperative games genre, because through all the limitations and the ever-changing team leader, the game cleverly deals with the alpha gamer syndrome. A person, who instinctively takes over the game and suggests “best” decisions to other players. In case of Rob’n Run, the current leader is the one who suggests the best options with the help of the implemented tools. The flaw of cooperative games has been perfectly turned into the advantage and foundation of game mechanics. I’ve come across a situation, when everyone pushed to the limit everything that was said to be in accordance with the restrictions, while combining the best way to submit clues in logical sequences, that could tell as much as possible. The simplest example is using the “You need the tool <insert name>” hint, and right after it “The required number of one of your tools is  <number> “. There are a lot of clues and possibilities to combine them. There are clues that when well used, will allow even a crew member to communicate something to other members. 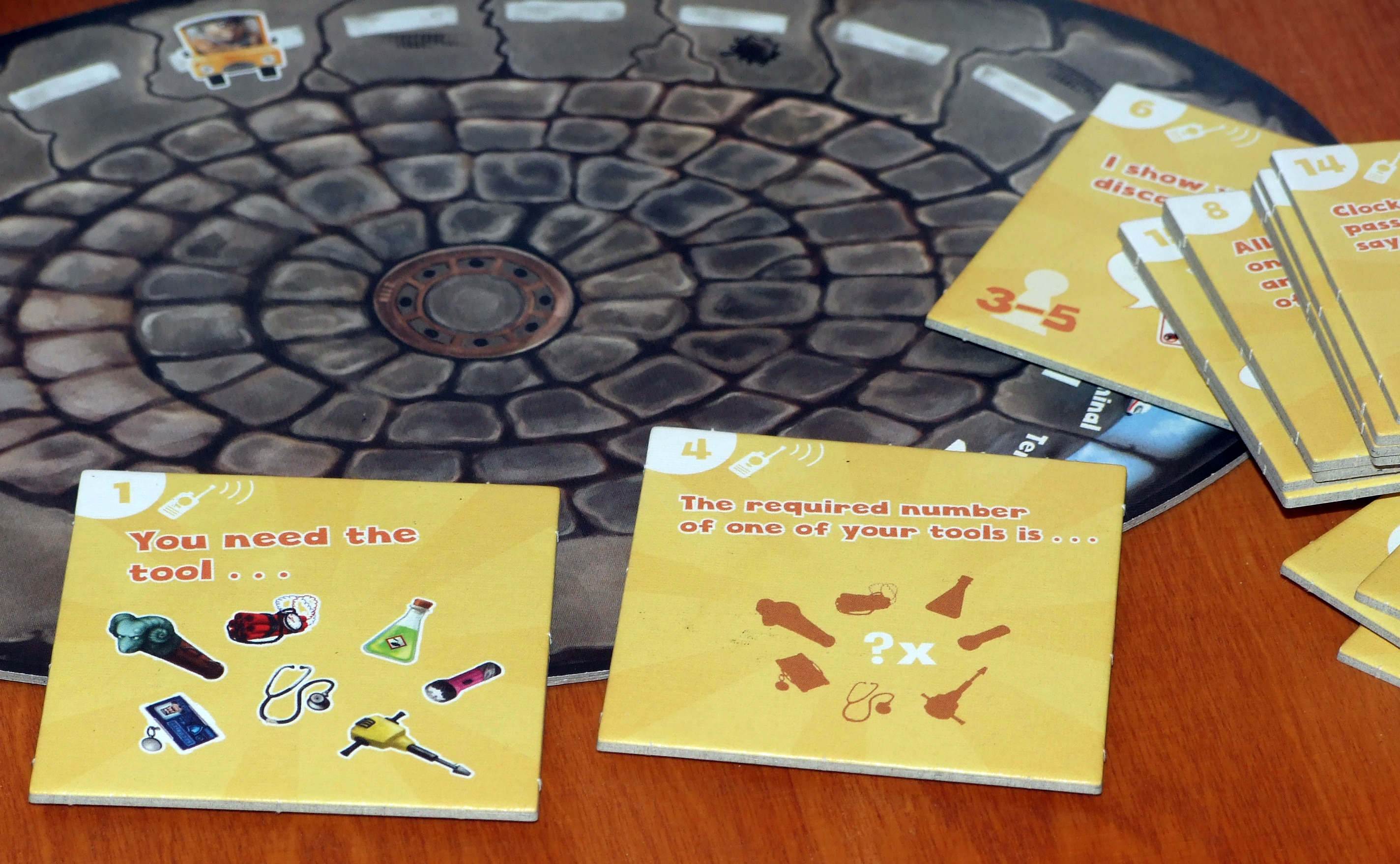 For me, creative thinking is the most important element of this game, equally giving fun and torment depending on how well our hints will be interpreted. The sound of facepalm and laughter, as a result of over interpretation or complete misinterpretation of the reasoning of the boss and team, is something that can often accompany you during the game. Several predefined scenarios that determine the pool of available clues, the distribution of alarm cubes and dealers in districts, and the option to create your own variants strongly affect the replayability of the game. Where one play should not take more than an hour. As the only noticeable drawback one could complain about, I could indicate the susceptibility of this game to the possible determination of something like Bridge bidding convention. Players, who would like to play this way, would simply spoil the game. Where for a given boss’s suggestion, everyone would know exactly what to add to the tool stack. But in fact all games with limited communication are sensitive to this kind of abuse, and in this particular case it would completely break the whole idea of ​​the game. 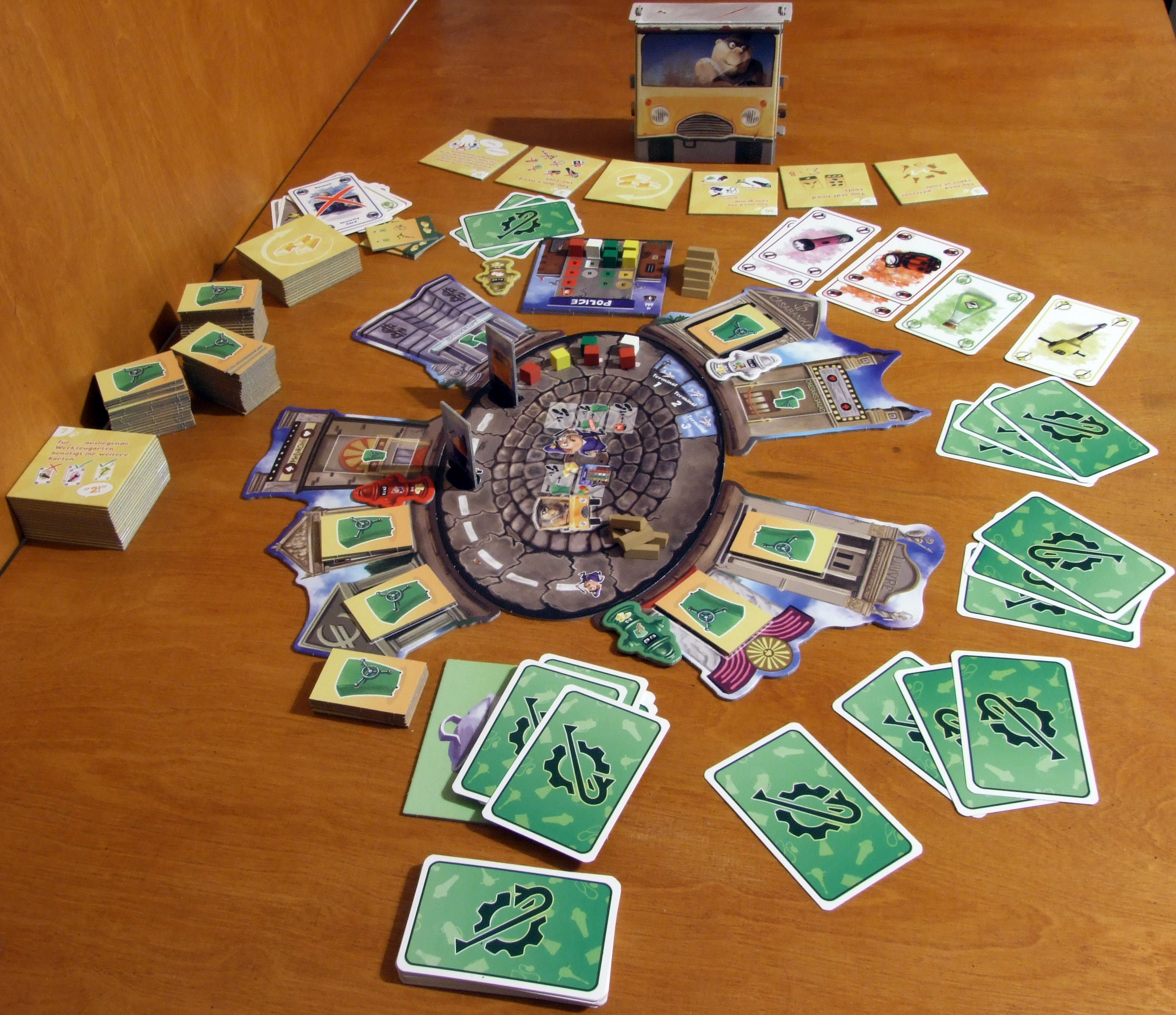 Rob’n Run will perform very well as a gateway game to the cooperative genre. In a very organic way, it forces the players to engage fully in cooperation, eliminating the alpha gamer syndrome. It’s quite easy to adjust its difficulty level to players by modifying scenarios. Also It worked great for me as a convention game for teaming up new players with each other.