“Legacy”-type games are already well known, players sit down to them with certain expectations. We play the campaign and then we are left with a version of the game modified by our choices, slightly different “after the campaign” rules,  or a stack of components that we may someday use somewhere else. Let’s check how the Rise of Queensdale handled these expectations.

The creators of the game are the board game designing husband-wife duo of Markus and Inka Brand, who have also made Village, Rajas of the Ganges and the well known series of Exit. Visual aspect of the game has been taken care of by Fiore studio, whose works we can see i.e. in Mercado, and Michael Menzel known for Shogun, Pillars of the Earth or Rococo. The project was released in 2018 by the Alea which is Imprint of Ravensburger. 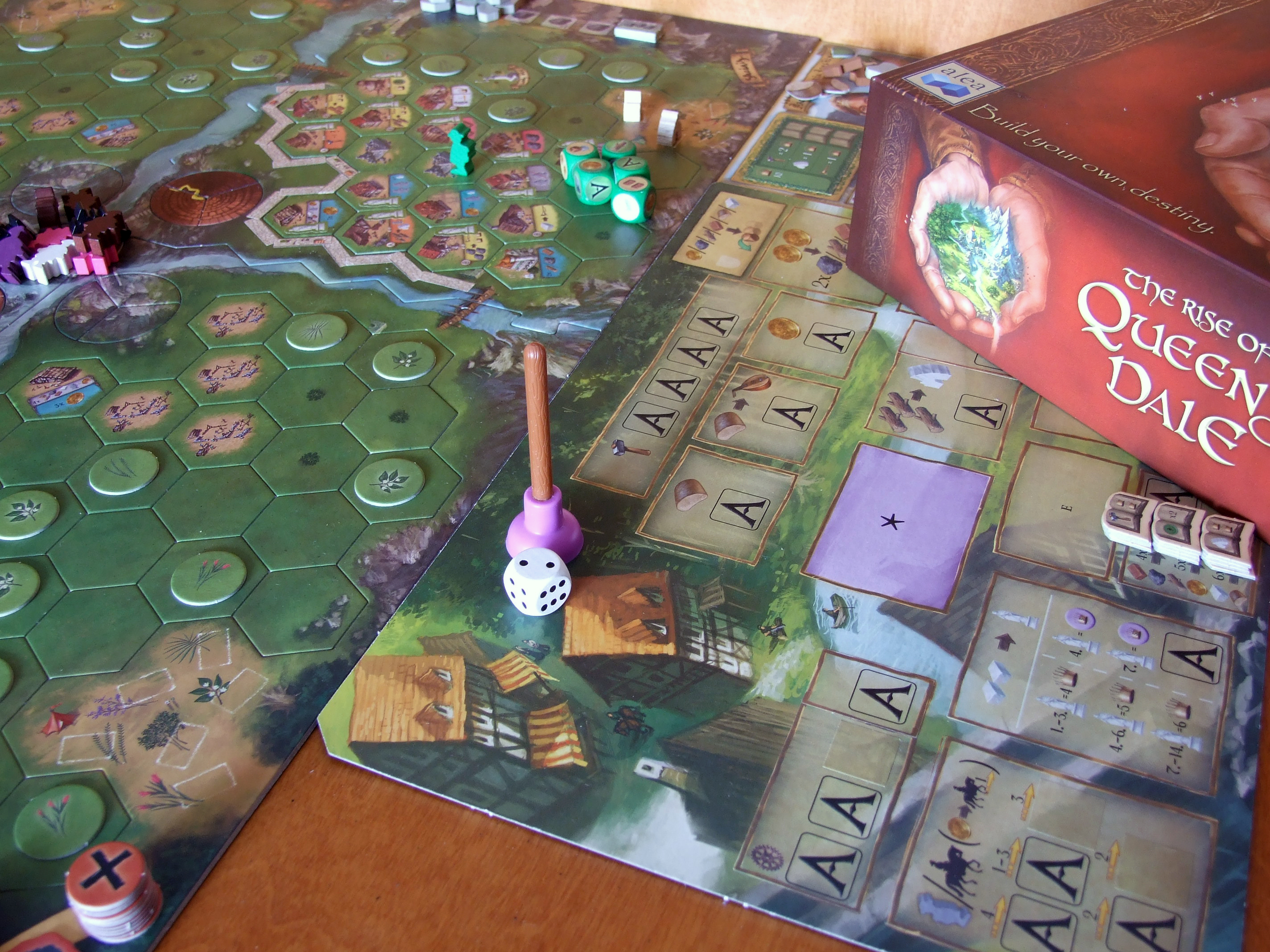 In our hands goes a sizable box, stuffed to the brim with components. After opening you will find a card, informing us not to look through the whole thing, but only to take out components required by the setup for the first game. Purists of the “legacy” formula may complain about the lack of packaging, such as small boxes that hide components from players, but it did not bother me. The game simply assumes that we do not intend to spoil our fun and we will follow the instructions. I would like to add that the mere browsing of sticker sheets or punch-outs that are not rubber-banded says almost nothing and we do not have to worry about accidental discovery of something we shouldn’t know. We have a sticker album type of rulebook, which we will fill in with the rules we’ve learned. Sheets with stickers for game components. A cloth bag. Wooden markers of resources, pawns and a set of clean, six-sided dice for each player. Two packs of large, stiff cards, in which there are decks for various purposes – the game will always instruct us, when a given card will be needed. Next we have a lot of cardboard. Let’s start with 4 big puzzle-like tiles of a map of Queensdale. Each of them consists of a grid of hexagonal tiles, that we will pull out of it. In addition to the main board, we have an action board and a board with a victory points, morale track and pawns explanations. Each player will be able to play the character of the players’ boards, during the campaign, we will be pulling out tokens and tiles from the next piles of punch-out boards, waiting for us in a plastic insert on the bottom of the box. Finally, I want to mention a small plunger … not an ordinary plunger, but a Royal Plunger, whose suction power will be needed for the aforementioned hexagonal tiles. Just by having fun with components, we are immediately sure that they are solid and durable. The graphics are nice and perfectly matched to the theme of the game. Game players’ boards give everyone the choice of  gender they would like to play as. Symbols on tokens, stickers and boards are consistent and legible. Setting up the game, and later putting it back in the box, is quite efficient, because each player gets zipper bags for their components, which I forgot to mention earlier. The only slight drawback that I noticed, is the necessity to keep the game in a horizontal position. After the first play, the tiles on the board will be liable to jump out of it, when storing the game vertically. 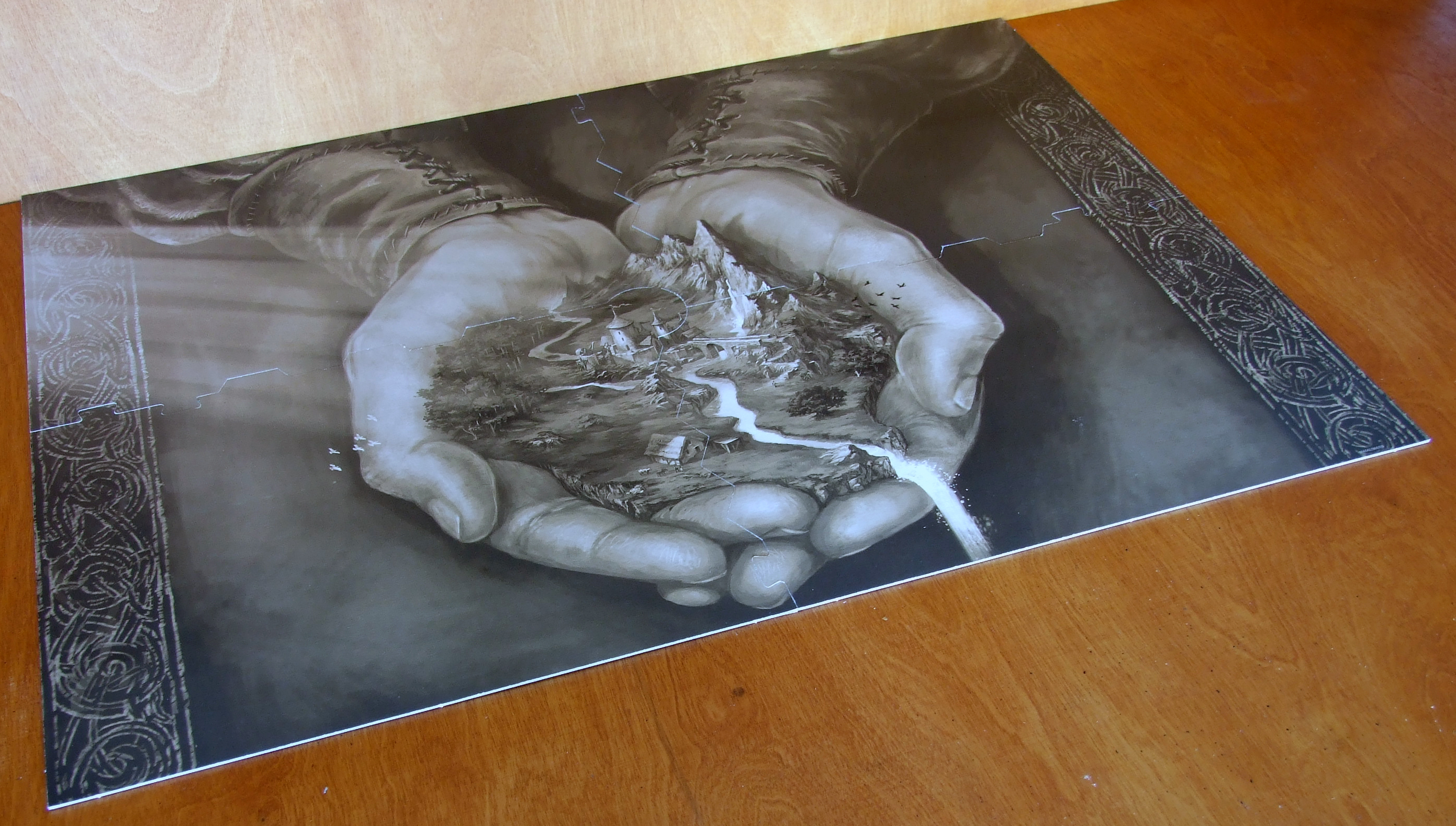 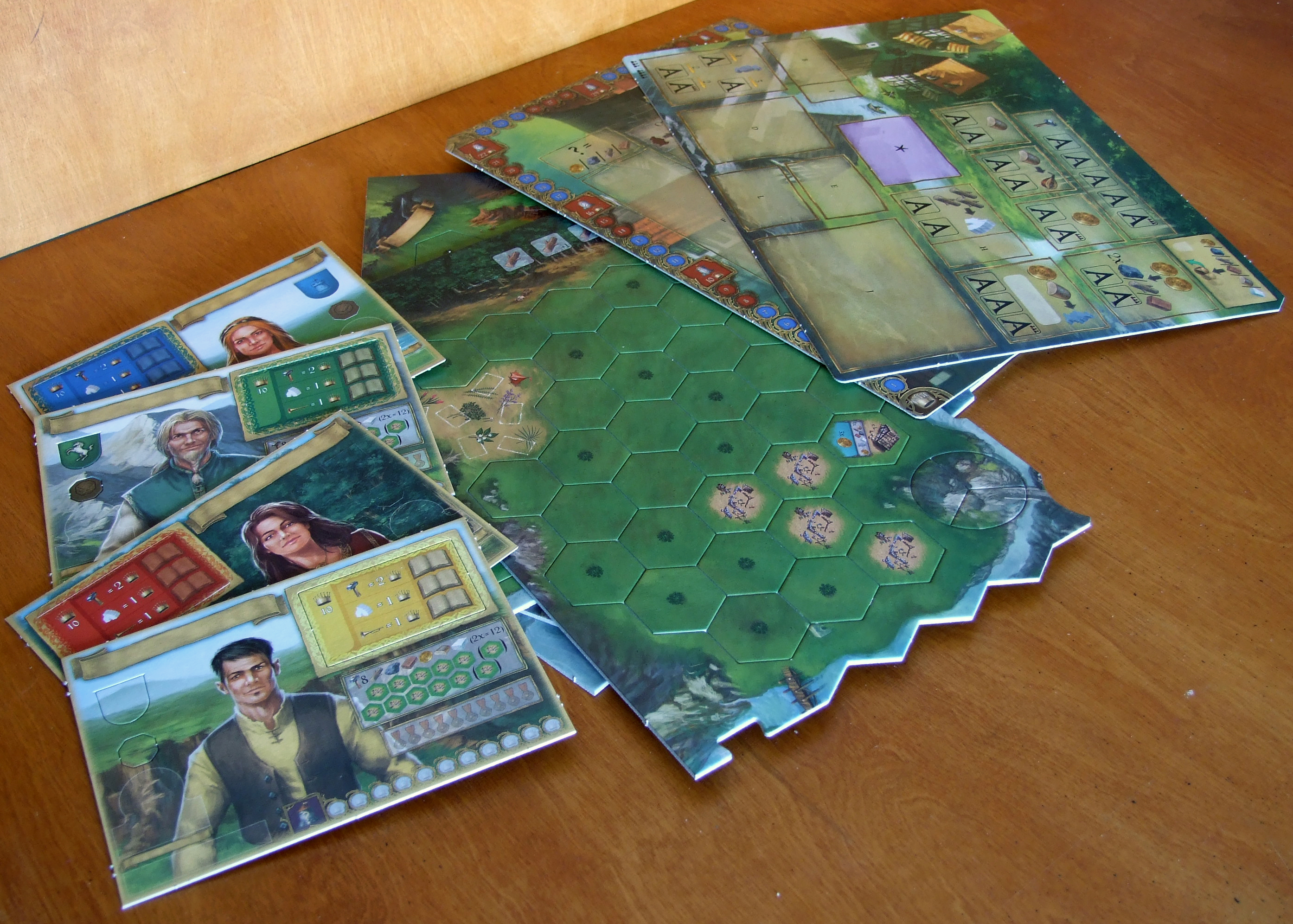 Once upon a time, in a kingdom far, far away, lived King Nepomuk II and Queen Margaret. Unfortunately, fate wanted his beloved wife to fail in health, consumed by some unknown disease. The symptoms did not diminish, until the royal medic recommended her spending time near Queensdale, where her cousin lived. As soon as it turned out, that the stay there would bring her relief, the king without hesitation decided to commission building a castle there. At this point, the players enter this story. They play as the heads of four ambitious families, who the king turns to, it will be on your shoulders to build the most beautiful castle. At the same time, you have to hurry because of obvious reasons, time plays an important role in the venture. During the campaign, you will create the story of a small valley, struggling with negative events and enjoying profits from those positive ones. A lot will depend on your approach to cooperation and taken decisions. In the end, you are building one castle, but the greatest gratitude of the king will be granted to the one who finishes his part the fastest. 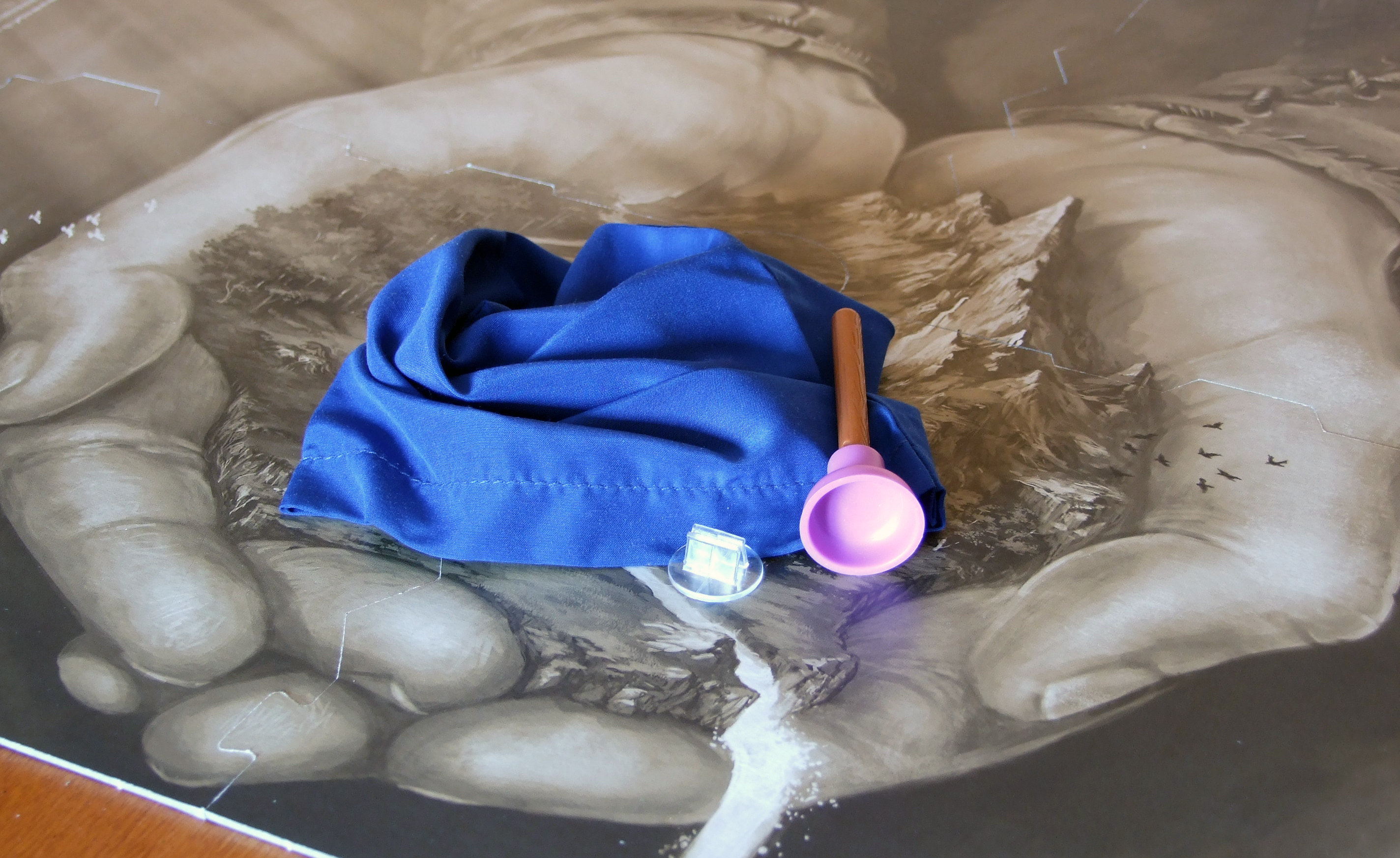 The game setting connects really well with mechanics. Managing your borough of Queensdale, acquiring raw materials or employees, and dealing with events and unexpected tasks brought by a royal messenger named Thilo, fit in perfectly with the world of the game. Although in the essence we are collecting required victory points as quickly as possible, it is very important to follow the storyline when reading cards, because for a trained ear it can smuggle important information for later use. 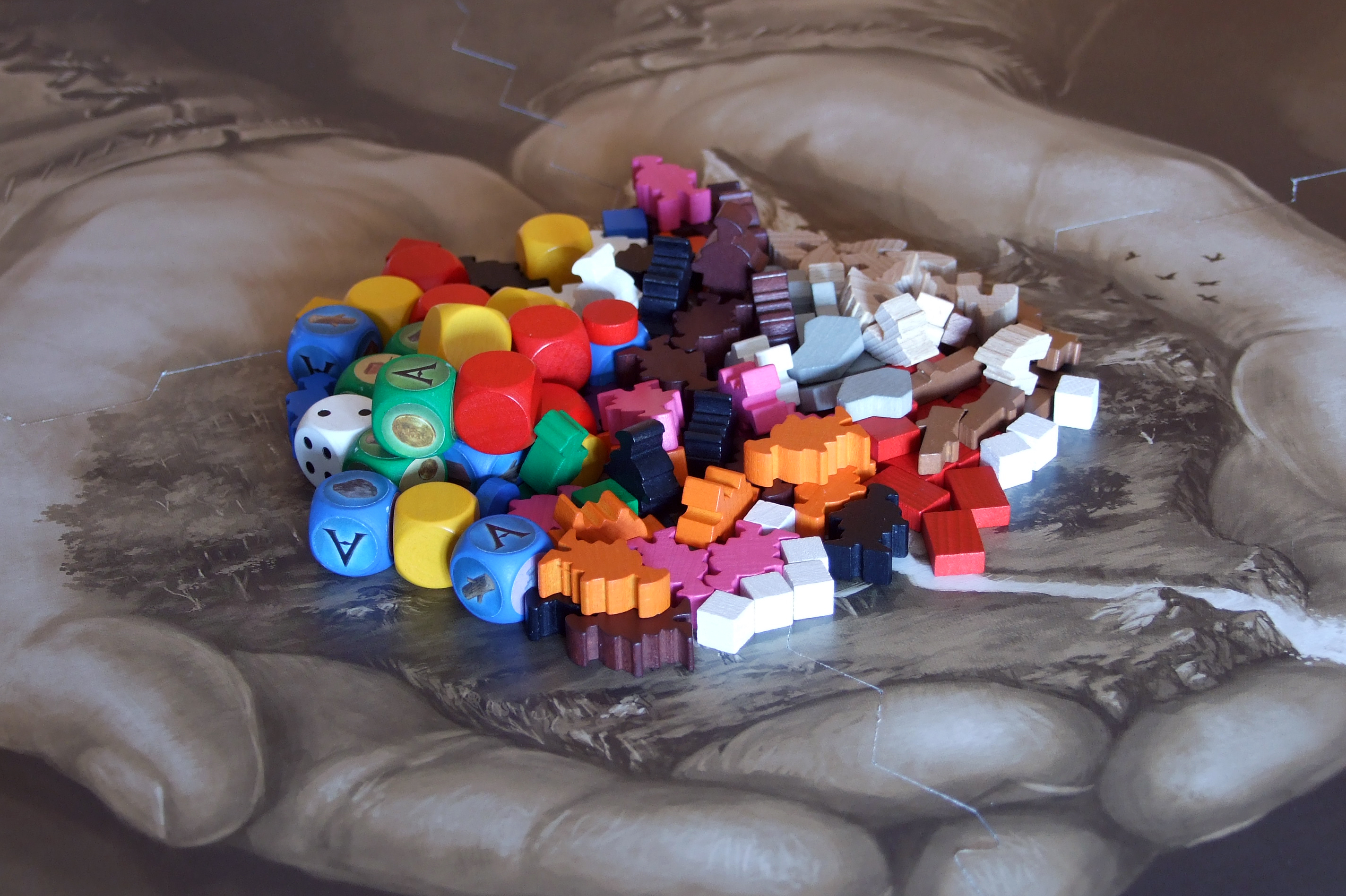 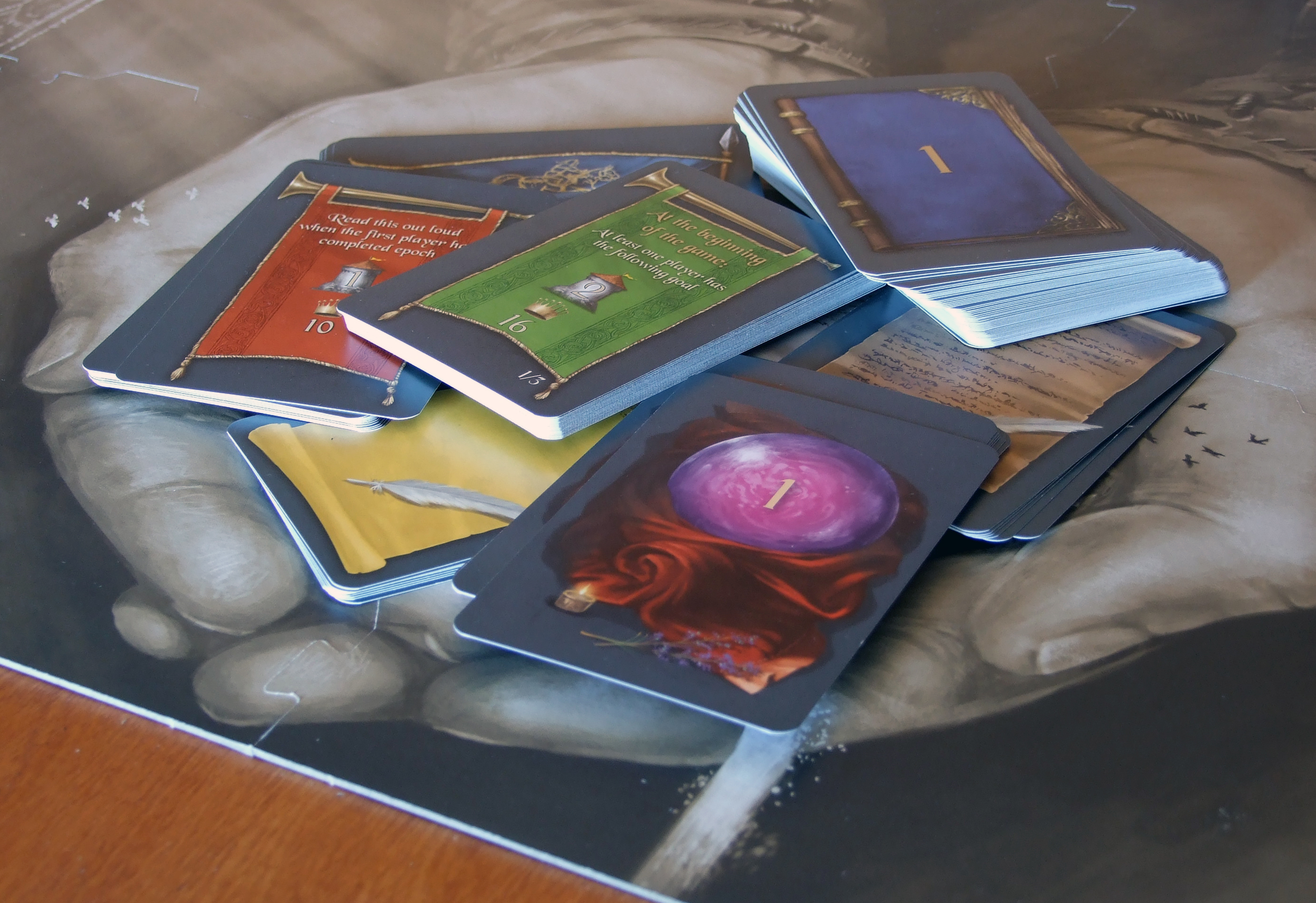 Mechanically, the game belongs to the family of worker placement, where we delegate our workers to perform a specific action in a turn. In this case, this role is taken by the dice, which every player has the same at the beginning. In the course of the game, however, we will modify them by sticking them with new functions on the sides. The results on the rolled dice will determine the groups of fields that we will place them on. It may happen that we will be completely unhappy with the result obtained after our roll, but the game has a neat mitigation mechanism, in the form of rerolls and the aforementioned modification of the dice. We will get to spent gathered resources on the development of our fragment of the settlements near the castle, the play ends when at least one of the players reaches the required value of victory points. Any player who does this, will build a fragment of their tower as a reward. The construction of such a fragment is the achievement of the purpose of the current epoch. All new game rules will be introduced with the first start of a new epoch, thus “The Rise of Queensdale” allows you to test them right away. The description of the rules is very detailed and clear. During the whole campaign, only at one time we had a problem with understanding a rule, it was about the action of “saving points for later”, but we found help at BoardGameGeek portal forum, where a few other people also needed explanation of this function. This is one of the mechanisms to give some compensation to players who couldn’t achieve their epoch goal, players who have not achieved it, receive head start victory points for the next game. Its value is equal to the level of the last reached/exceeded tower on victory point track at the end of a game (where levels are from 1 to 9). 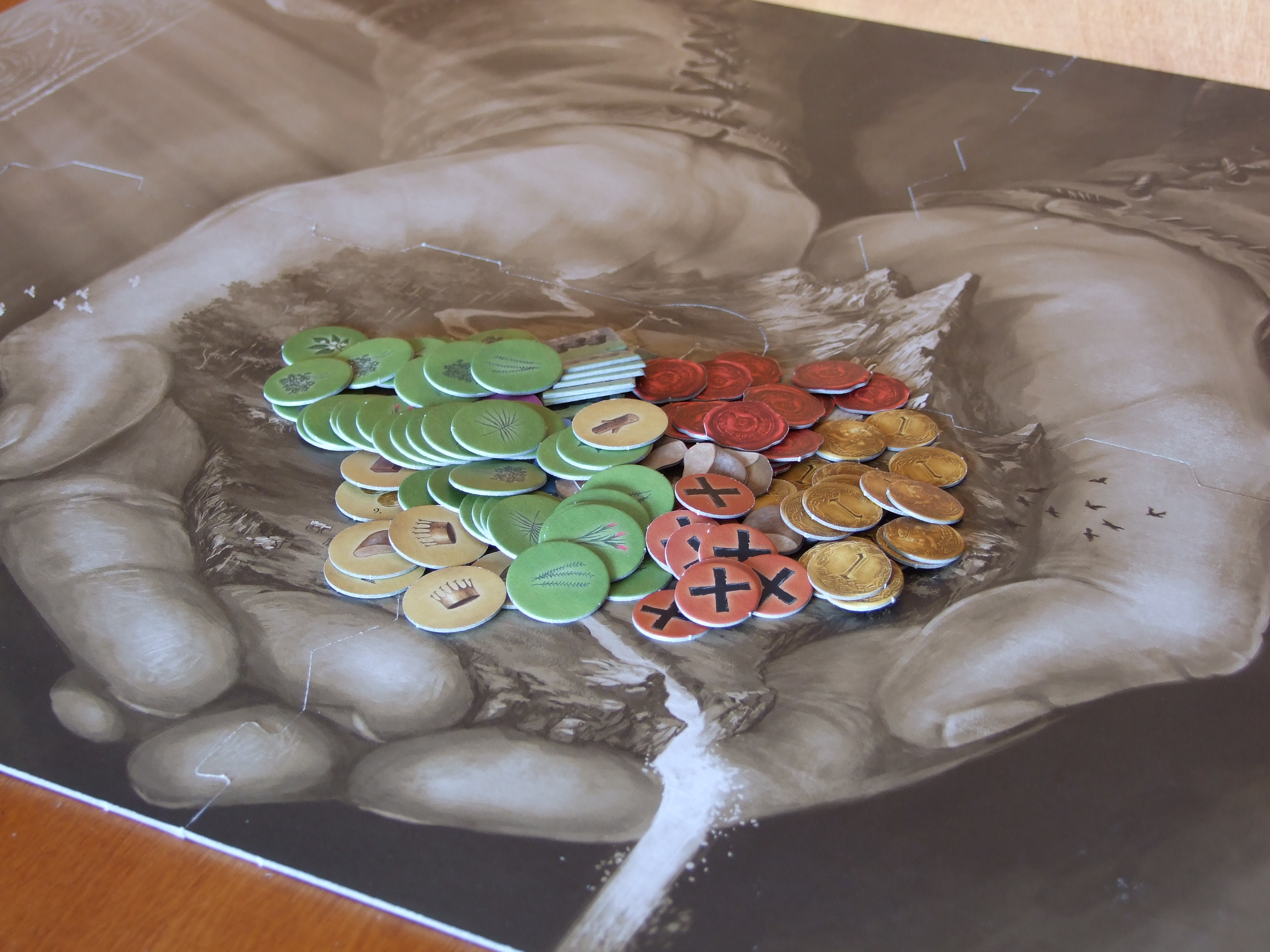 Generally, the game is built in such a way that sometimes it’s better not to win, sometimes it’s better not to chase points. Sometimes it will be good not to take some action just to block someone’s die, but there will also be times when every player is in a hurry to do something as quickly as possible, while at the same time acting to the detriment of others. I do not want to reveal too much of the range of available actions, because I would not want to spoil the pleasure of learning about the game and the complexity of its mechanic. In the campaign, you will be able to follow various paths and there will be some part of the mechanic that you will not discover. At the end, as in most legacy games, we will get a board “experienced” by our games, where we can continue to play single, unconnected with campaign, games with a few changes in the rules.

An important thing, when you are going to go into “The Rise of Queensdale” is to determine how many people you want to play. The game can be played in a group of 2 to 4 people, but after the start of the campaign, the number of players is unchanged and each play requires the participation of each of the people who start it. On the one hand, this obliges the players to make some schedule of game nights, specifically for this campaign. On the other hand, it allows you to divide the costs of the purchased copy among all participants. One play takes about 40-60 minutes. From my own experience I can say that the entire campaign, depending on the number of players and how they achieve the epoch goals, can last from about 20 to 40 games, but I also heard about longer ones. During the game, you won’t feel downtime, provided that someone does not get an analysis paralysis – an exaggerated analysis of their options, to the point where they can’t make any decision. In our turn, we simply place a die on some action space, and do what it tells us to do. Because each round begins with a roll of all dice, it engages us in tracking the results and choices of other players. 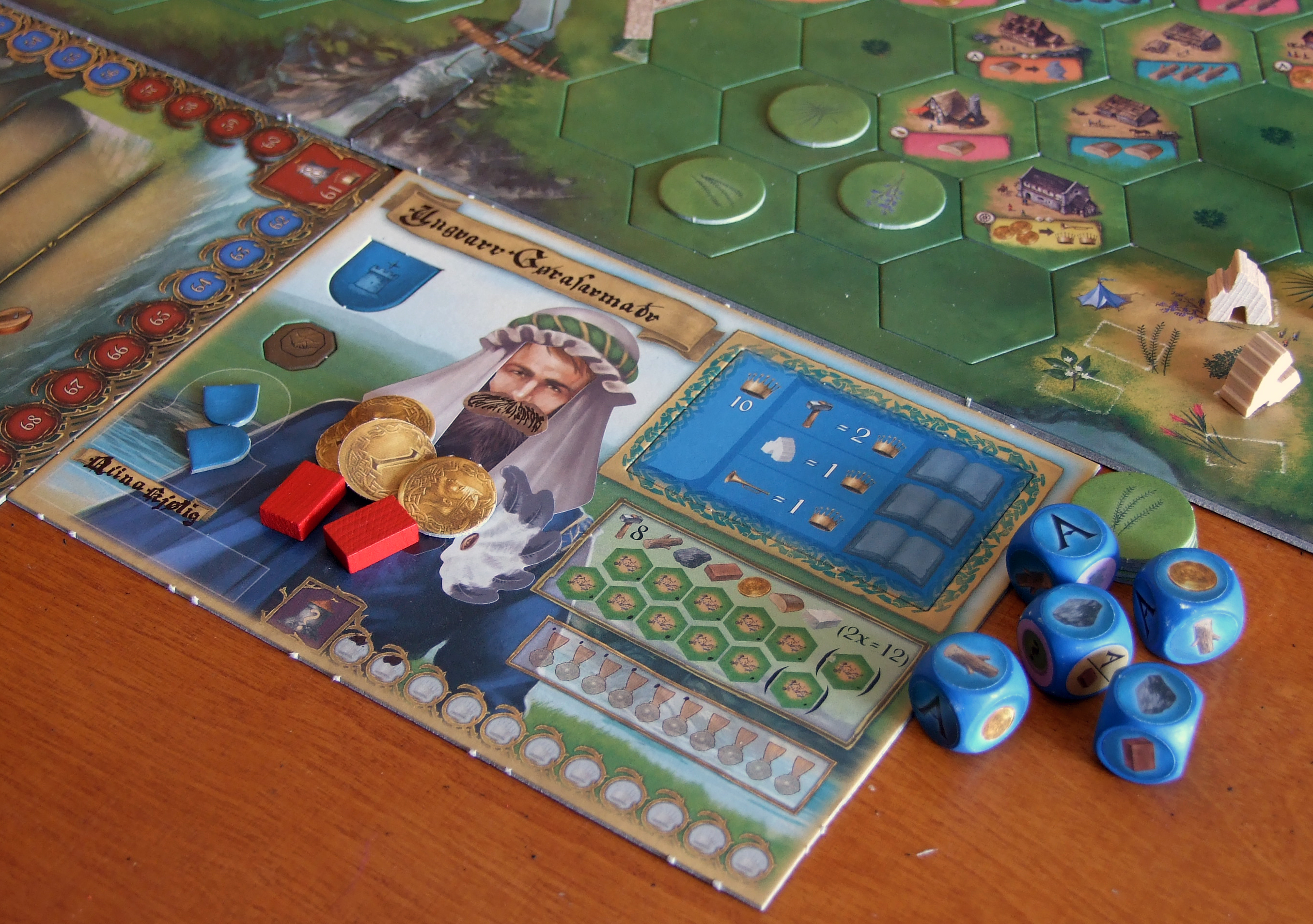 If you like games in the “worker placement” or “legacy” genre, this is the title for you. The ease, with which the game introduces the player into the rules, allows you to enjoy the fun as a casual player, and the variety of decisions to take and the ability to strategize in the game should satisfy the veterans. For me a very big plus was the atmosphere of the game, and the development of the story that accompanied our actions. I could not wait to play the next game. The game caught us so much that we decided to play the campaign once more, to which we are currently preparing. Despite knowing story and part of the events, we want to try to go through the other paths of choice. What I would like more from Queensdale, is the opportunity to buy sheets of stickers, because currently we had to print them with scans ourselves.