Yarr! you landlubbers! Do you think that the worker placement mechanism can only be employed in euro games? I swear on all 71 seas, that in “A tale of Pirates” the swift action and exciting adventure will not leave you for a second. All doubters and boosters, I’m ready to drag under the keel from the left to the right and back again.

We can enjoy this game since 2017 thanks to Cranio Creations under whose patronage it was released. The creators are Asger Harding Granerud known for Tzolkin and Daniel Skjold Pedersen and Daniele Tascini, who are responsible for the awesome Shaky Manor. The graphic design was taken up by Ruslan Audia, whose work can also be seen at Microworld. 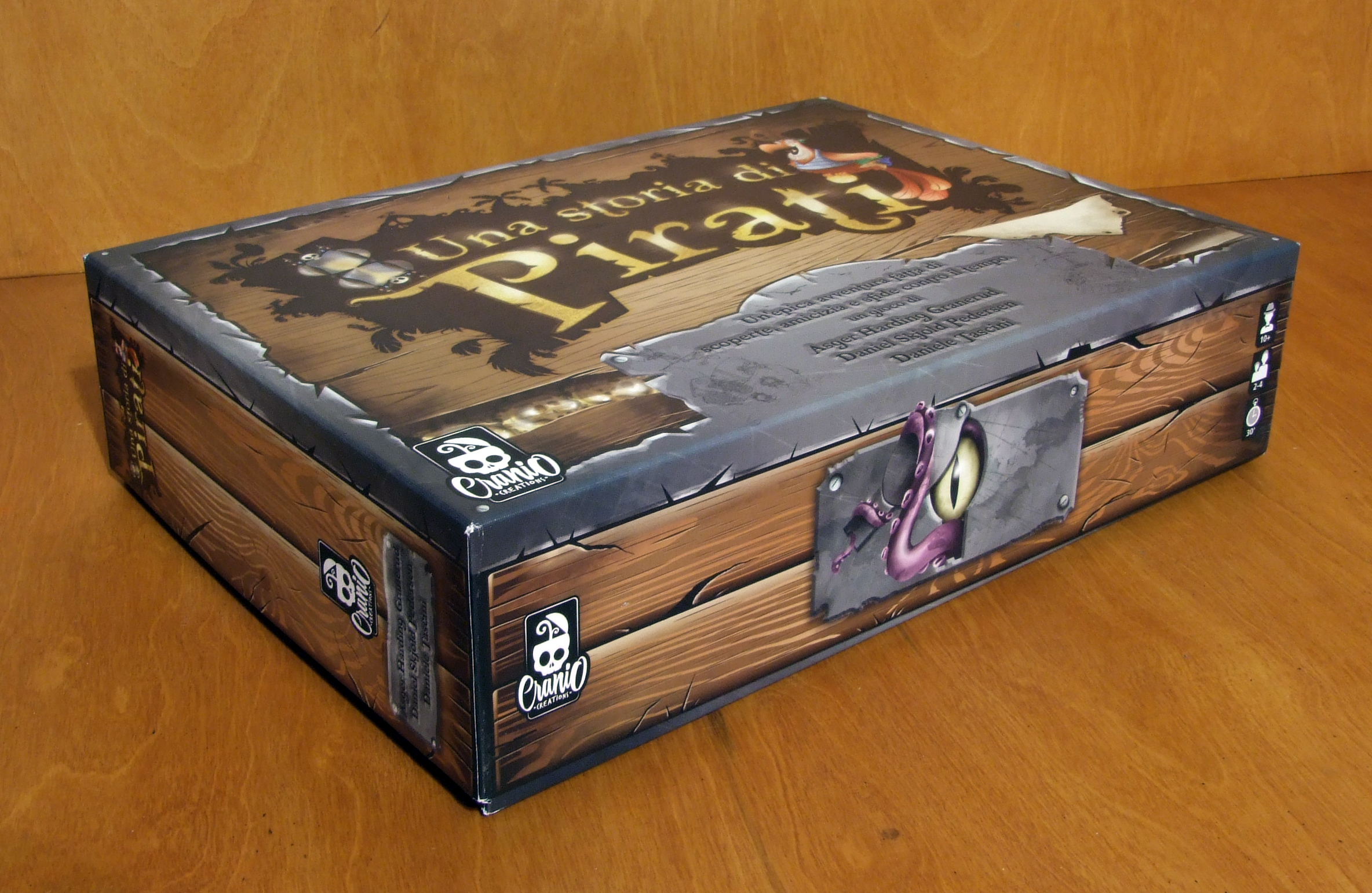 Let’s start with the packaging, in the case of an adventure game about pirates, it would be natural for the box to be a pirate treasure chest, and here “A tale of Pirates” does not let us down. It is slightly larger than standard box, inside it contains two plastic inserts so that we can conveniently store components. The whole thing is well thought out, but if we keep our chest in vertical position, the tokens and markers inside will probably spill … only what kind of pirate holds the chest with gold on its side?! Time for treasures. After opening, we will be welcomed by several sheets of thick cardboard, from which we will punch out and build our beautiful three-dimensional ship, also, we will receive some damage markers for enemy units and vitality points of our boat. We will sail on a compass rose made of six elements. The next components are wooden disks depicting cannonballs, attack die and corks with which we clog the damaged places on the ship. Next, we have hourglasses that will serve us as pawns and 10 foiled sachets. Each contains one scenario, most of the time introducing us to new components to play it. Sometimes inside we will find cards, sometimes something to expand the ship – I don’t want to write too much about them, because opening them is also part of the fun of sailing into the unknown. All elements are solidly made, consistent illustrations give everything a lot of climate. The only thing I could nitpick on is too much space in some places of the ship’s incisions, which caused us to i.e.  break the crow’s nest from the mast while we were playing. I handled with this by applying a layer of a vicol glue to these edges, after drying it sealed the incisions enough that the elements pushed into them do not fall out – every pirate must be able to patch his boat! 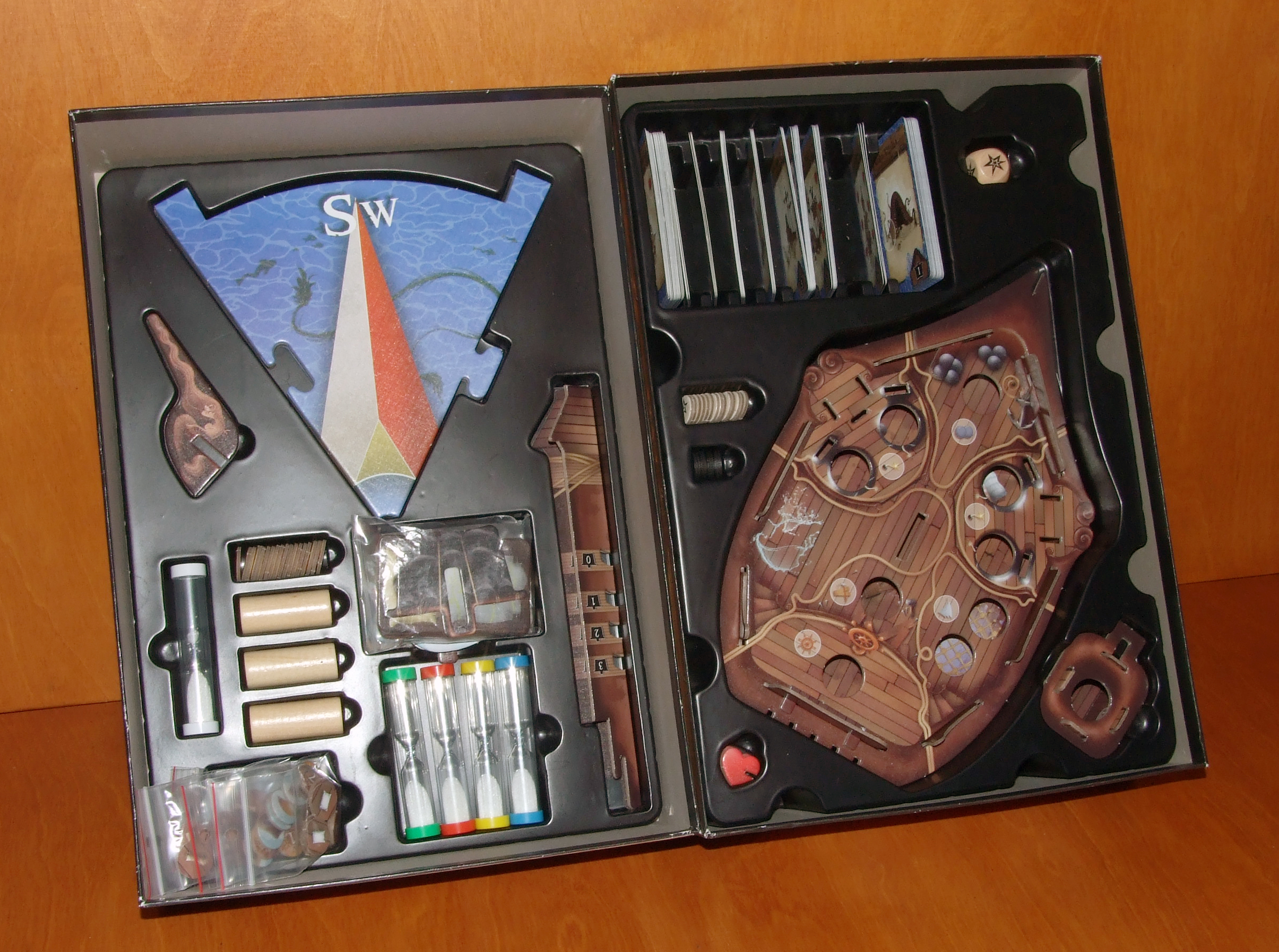 The last component is an application available for mobile devices. This is where we will find out what is the story behind the specific scenario, what rules will apply to the new components found in the sachets. How to prepare the game, and finally, the application will measure the duration of the round, and,  every now and then, make our game more challenging by random events. As an “appsceptic” boardgamer, by default, I approached it with a bit of hesitation. But this time my doubts were quickly discarded. Everything works smoothly and does not freeze. Well-chosen music builds tension, and the graphic brings more humor to setting. The only snag I’ve hit on was when I noticed in the situation when we were already playing one of the scenarios and my phone was depleted. Since there was no charger on hand, we decided to use the second device. We quickly downloaded the application and everything would be fine if not for the fact that we could not skip the scenarios we have already played. The newly installed game assumes that scenarios will be played in order without giving players opportunity to skip played scenario… so we went through them again, the joy was the same, which does not change the fact that a button to skip scenario would be useful. 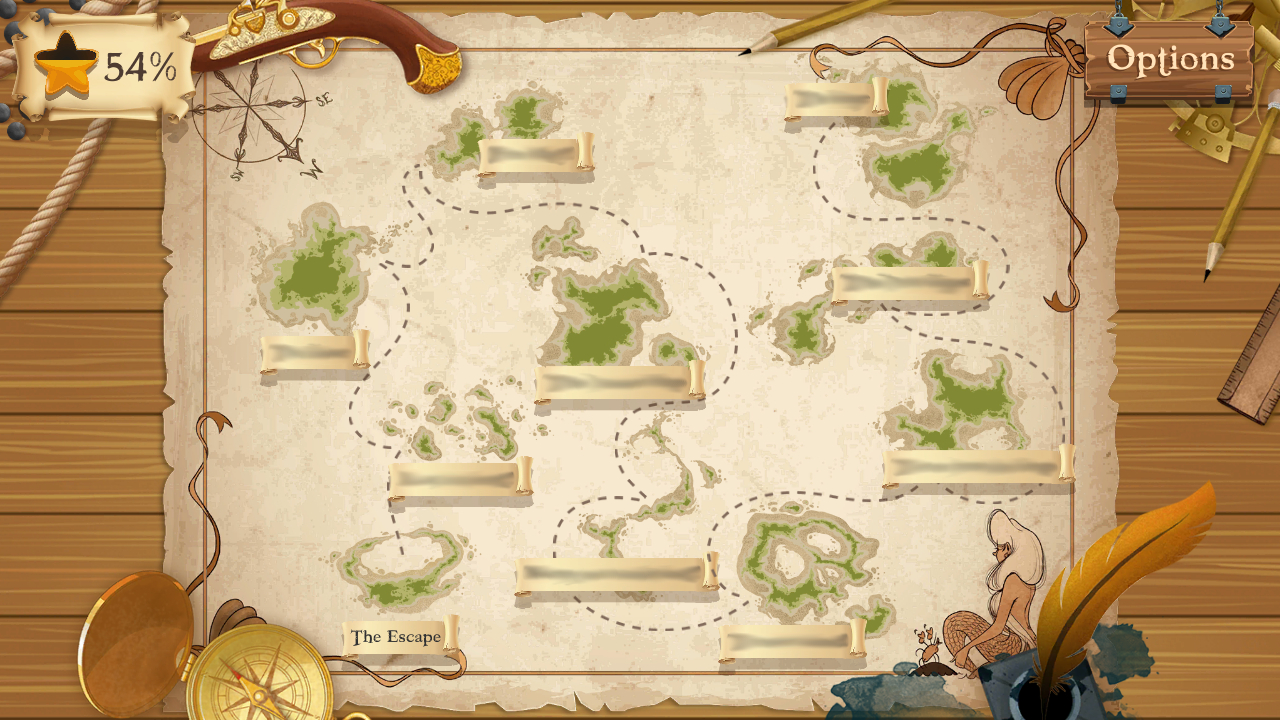 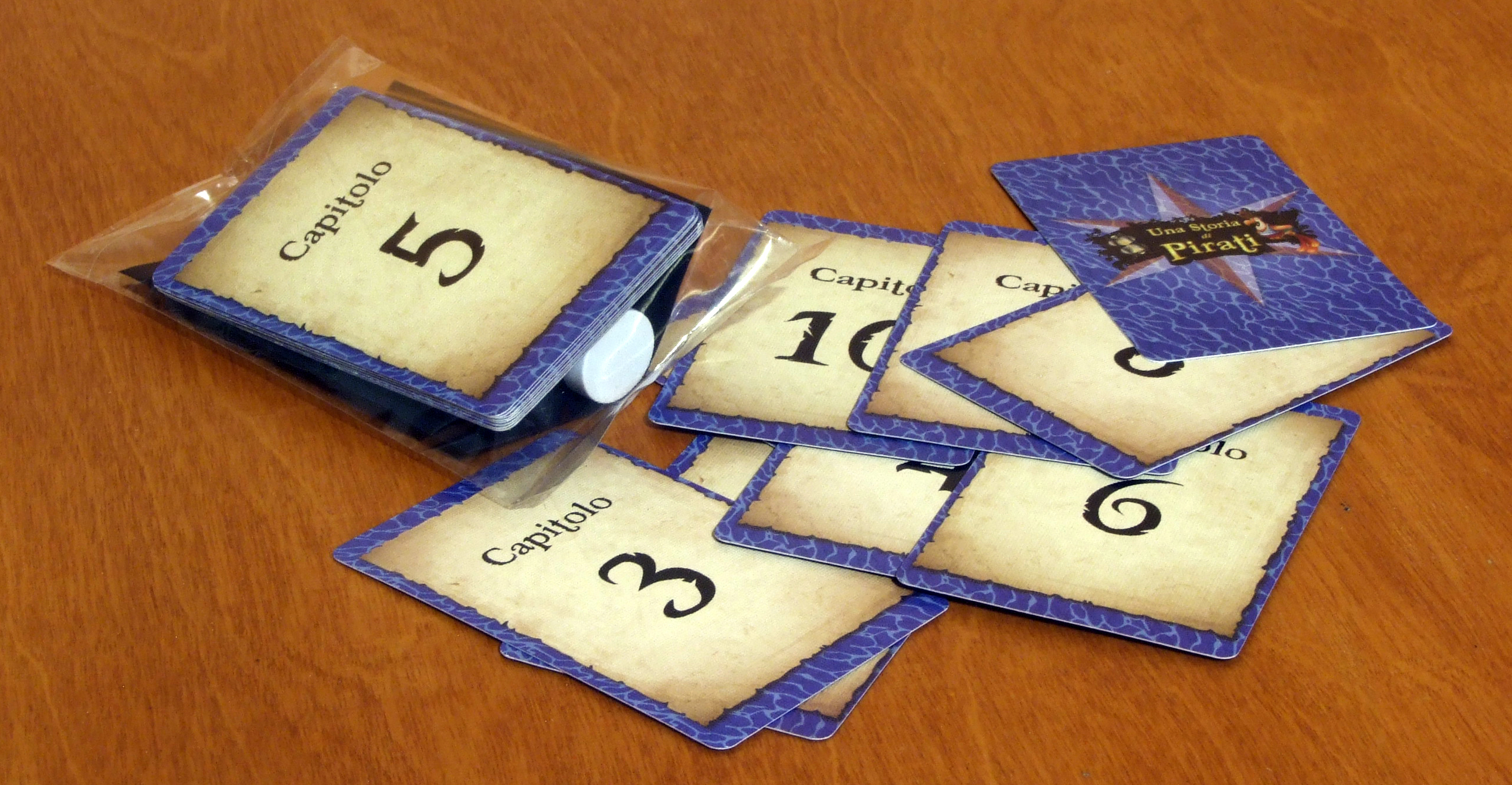 You will start your journey on Santa Cruz, where years ago, after clashing with the Spanish armada, you were captured. Time behind the bars, you devoted entirely to developing a clever escape plan that you are now implementing. After reaching the port, you found your boat – Ellen, held there by the armada, which had begun to fall into ruin, but not enough to not accompany you in the escape. From now on you will sail in the pursuit of adventure and escape from dangers. Each of the ten scenarios will introduce new rules, components and reveal a fragment of your crew’s story. Thematically, the game combines perfectly with mechanics. The atmospheric music and components entice players completely. When I played every single scenario, I had the feeling of hustling around the ship in a hurry. Patching holes so we won’t sink, panicking while brainstorming about what is best to do right now or shouting at other crewmen because we need something to be done is inherent. 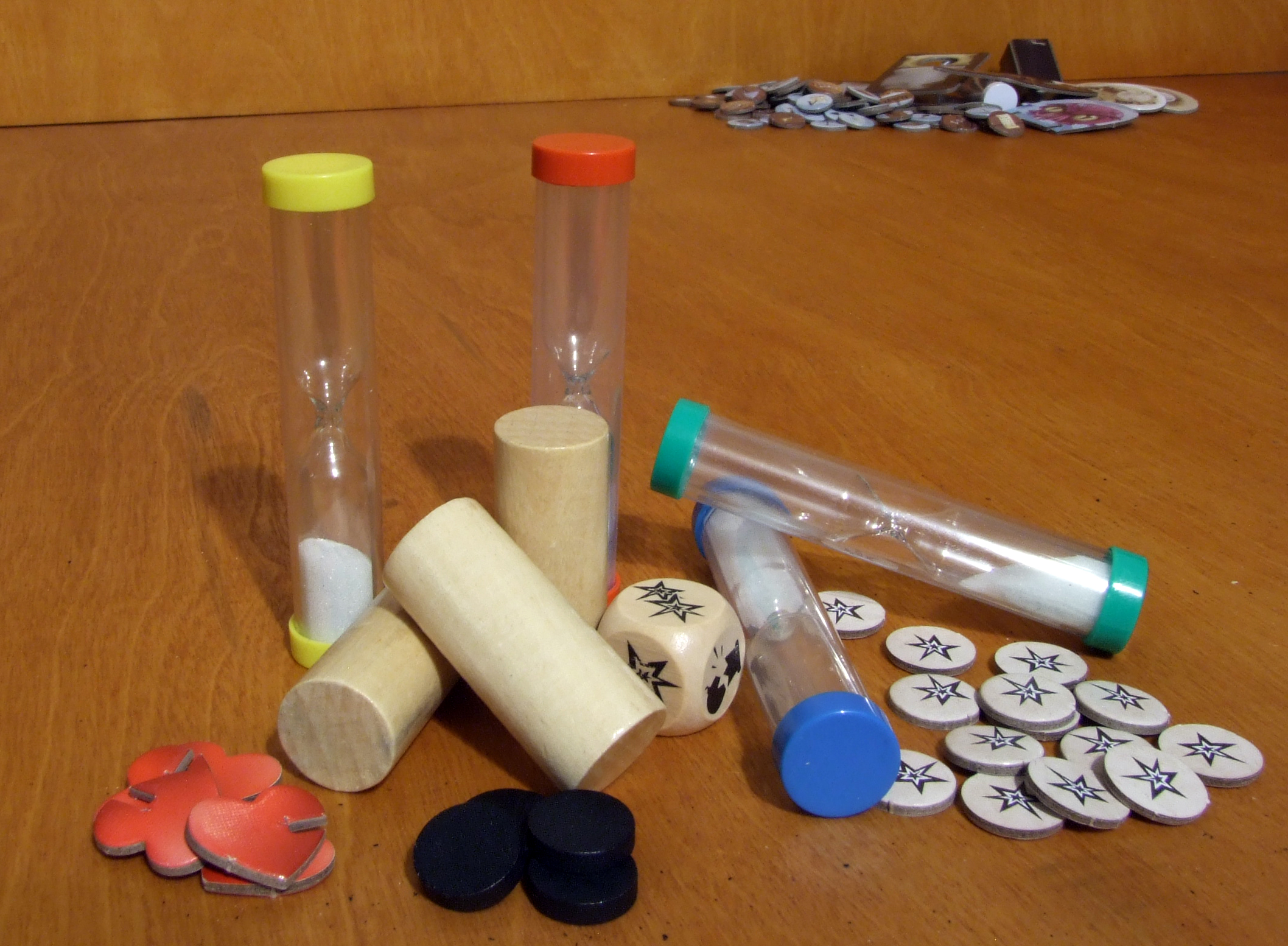 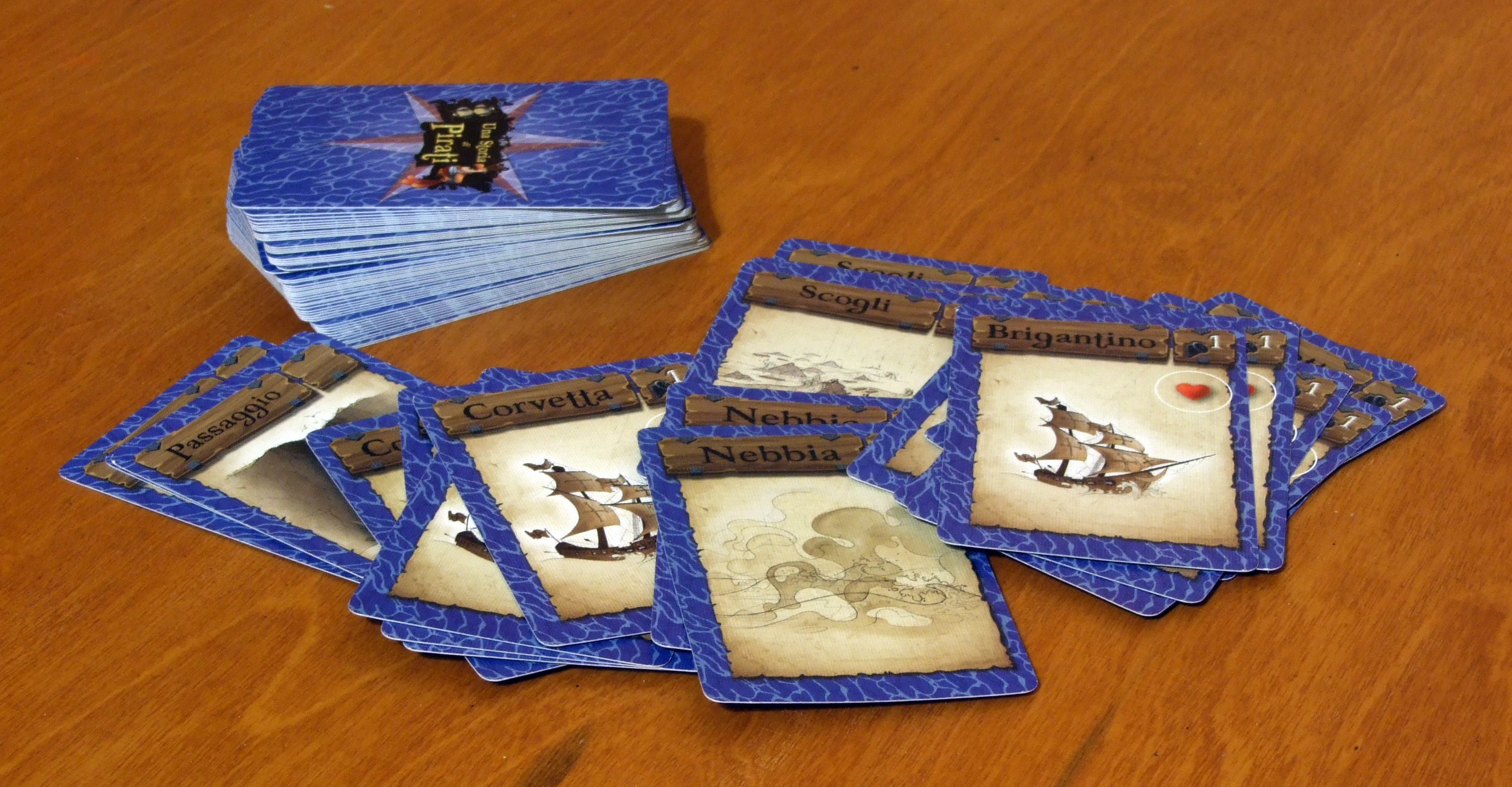 Time … everything is on time. Each spot in the game is a place where you will place your pawn. Your pawn is an hourglass, only you can touch your hourglass. From what I read in the manual, the legend says that just by touching someone else’s hourglass pirates were getting hooks instead of a hand. Once placed in place, the sand in hourglass has to run out. Once it’s done, you do the action from the spot and move it to another one, or you can wait with the action for a convenient moment (eg until someone changes the speed, you cannot steer, so you wait). Action fields are divided into groups, you can never perform actions from the same group – which ensures an eternal hullabaloo and running on the deck. You play a few rounds depending on how much the scenario will need, each round takes the time specified by the application. During the round, you will interact with the cards of a given scenario that will be spread around Ellen, and react to events that will appear randomly in the application. At the end of the round, the application will make you run actions assigned to the remaining cards around the board. If it does not make you sink, that’s good. It’s time to start the next round. If in these few rounds you fail to meet the winning conditions for the scenario, you lose. Preparation for the game, the mechanics of cards and components is part of the scenario, thanks to which we are able to learn the variations of the game very smoothly. We can play it the party of 2 to 4 pirates, in the case of a two-person team, each pirate gets two hourglasses under control. One game lasts about 30 minutes. In the application we will be able to choose one of three levels of difficulty, in addition, if we win, we will get 1 to 3 stars for how well we played. 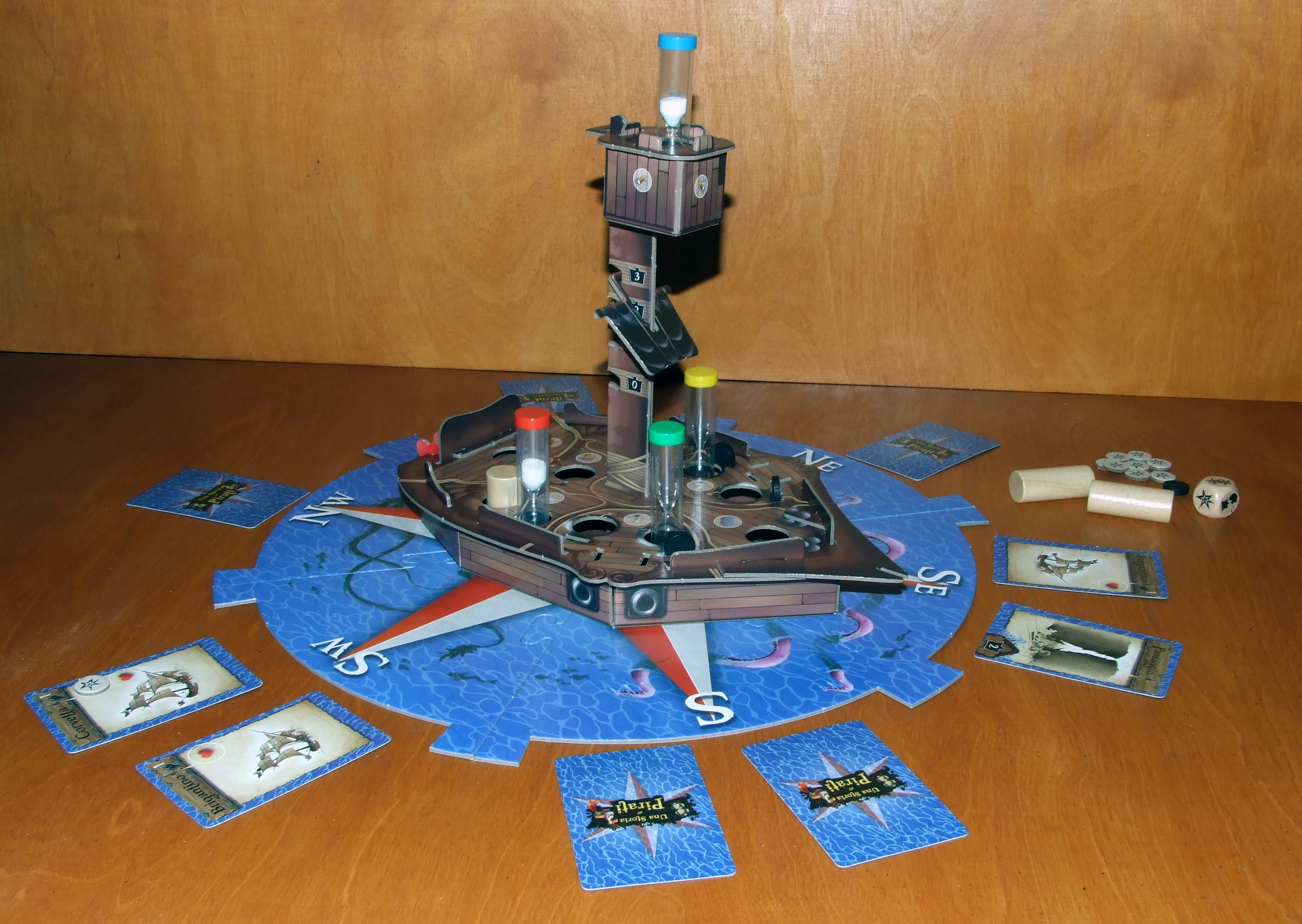 A tale of Pirates – the best pirate game which I have had the opportunity to play. From components, through history, to mechanics, it drips with climate, keeping it in a humorous convention. Greatly engages all players, keeps you in suspense and does not let you get bored. It forces cooperation and working together. As in most games of this type, there is the possibility of the appearance of an alpha player who “knows better”, but the time element will limit it. In addition, there are a lot of things to do in the game, each player will sometimes shout what it would be good to do and one person simply has no chance to watch over everything and dominate the game. After playing the whole campaign several times, I am able to say that … I want more! This game in my opinion should be on the shelf of every boardgamer. Exciting, addictive and easy to explain – it will please both the casual player and the old timer. On top of that, it has a lot of space for possible expansions. Where additions can be made as new scenarios, in the form of envelopes and updates for application or new ships for our dear crew. Personally I would like to see in this game the opportunity to create my own scenarios that could be thrown into the app, but it would be a cherry on top. I’m going to collect my  crew and we’re going to hit big blue and plunder some caravel, see you in the wide waters!