The world is left in ruins, as you look to the horizon everywhere you can see is  destruction and devastation. Cosmic horrors descended to the world and decided to fight over what remained. This time I will dust off and play Cthulhu Wars, to check how the game works after almost 2 years since it began appearing on the shelves.

The author of this game is Sandy Petersen, a man who was one of the creators of Arkham Horror’s first edition – a co-op game I love. Cthulhu Wars was published through a Kickstarter campaign, where it was produced by Green Eye Games and Petersen Games. The campaign began in June 2013, bringing together nearly four and a half thousand backers, who have decided to support the project with a sum of nearly one and a half million dollars. The game has made players wait a bit to finally ship to them in 2015. The cost to be borne, in order to enjoy this title, started at 150$. In the same year in October, the campaign for the second edition was launched according to the principle “make hay while the sun shines”. Both campaigns aside from the basic version of the game abounded in the ability to upgrade their version with additional factions, units and upgraded components for the basic version. If anyone was tempted to get the whole game, he could do it by spending about 700$. I have played both with expansions and the basic game, which I will be focusing on in this review. Currently another campaign for this game is underway, this time the costs have increased slightly beyond the 700$ mark – and the delivery of the game is scheduled for 2018. 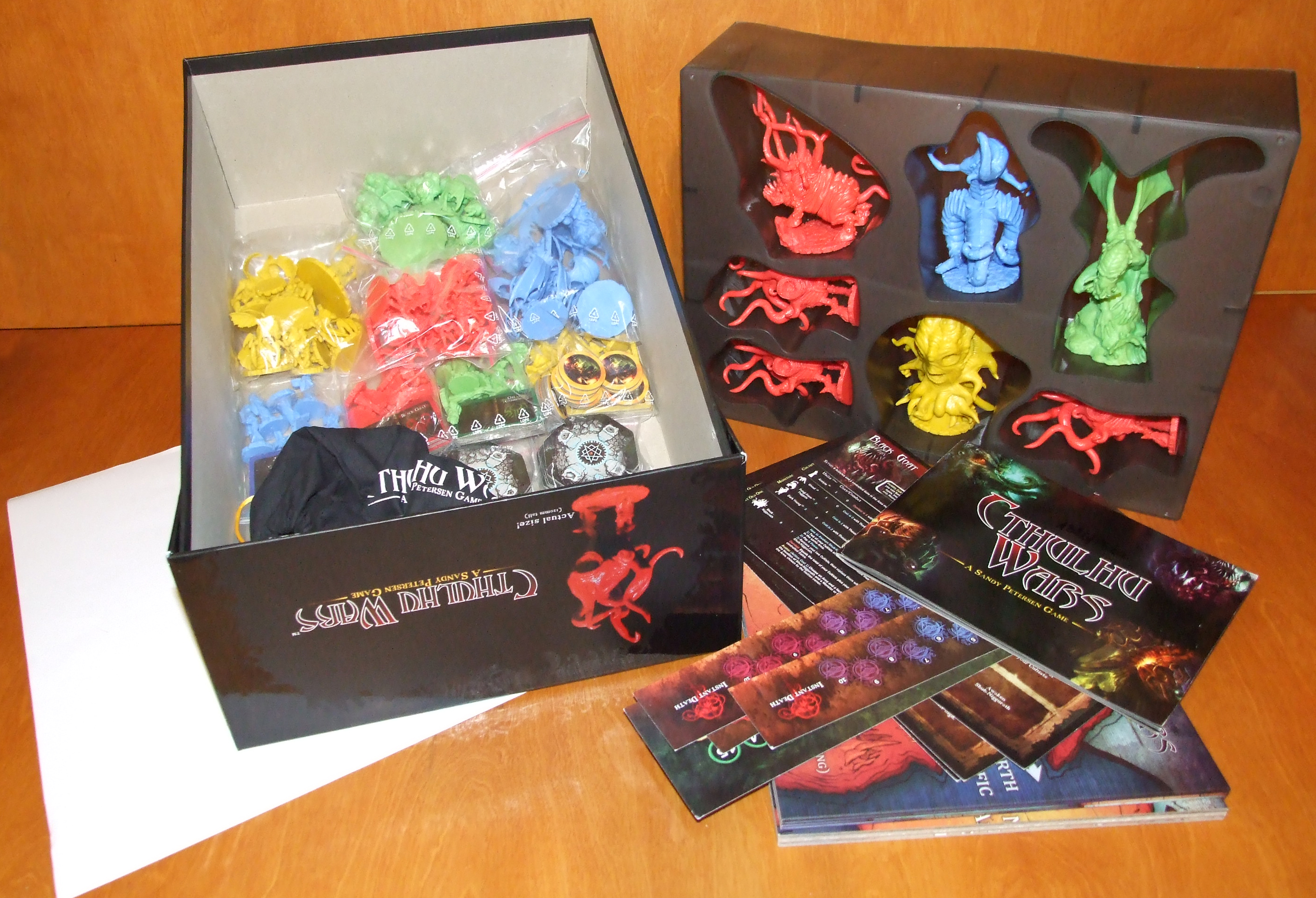 Let’s start with the box, which is huge (33cm x 43cm x 16cm), covered in elegant black with an illustration containing 4 basic factions. Inside, we will find a hard plastic insert for 7 figures and a thin cardboard sheet to cover the insert. While the box is capacious and everything could be comfortably placed in it, the insert is not functional enough. The way those 7 larger figures are placed in it, makes it take up so much space, that when you put It in the box, you will have problems with stuffing in smaller figures which are a total of 57. I can’t imagine comfortable use of it, if someone wanted to store in the box the game with any expansions. Figurines, of which there are a total of 64 for the basic version, are eye candy. The impressive size and weight of the four great old ones make a very good impression. Everything is molded from plastic, which retains some elasticity, so even if sometimes some bending will happen, there is a good chance that nothing will happen to the model. Thick cardboard was used for some components such as two-piece double sided map, stacks of tokens,  gate tiles and spell books, which gives a sense of solidity. It may be a little bit surprising that faction cards, as well as doom track and annihilation ritual track, were printed on thin cardboard that looks poorly. Beside that, in the box you will find a nice pouch for the elder sign tokens, 20 6-sided dice, rulebook and reference cards. Everything is illustrated legibly, coherently but sparingly. It seems that the illustrations only appear when they are really necessary. The quality of the components brings mixed feelings, we get quite a lot of solid components for a fairly large price, but for some reason we also find a few flimsy ones, which compared to the rest of the components, are giving the impression, that the publisher was trying to “cut corners”. The map also raises mixed feelings. Although solid and good looking, it’s just too small. Areas are often too tight to accommodate even small amount of figures.

At first glance, mechanically Cthulhu Wars falls into the area control and victory points hoarding genre, typical for the euro games. Each player receives an asymmetric faction, with unique units and powers. Every faction has  its own “best” way to earn victory points. In addition, they are also equipped with spell books. Each fraction has 6 and they are specific to it. We unlock them by fulfilling certain conditions, which are described on the faction card. These spell books are basically an additional set of skills and special actions for our faction. If a player unlocks 6 spell books, from then on he will be able to make move and battle action at the same time – I will explain actions a little further. 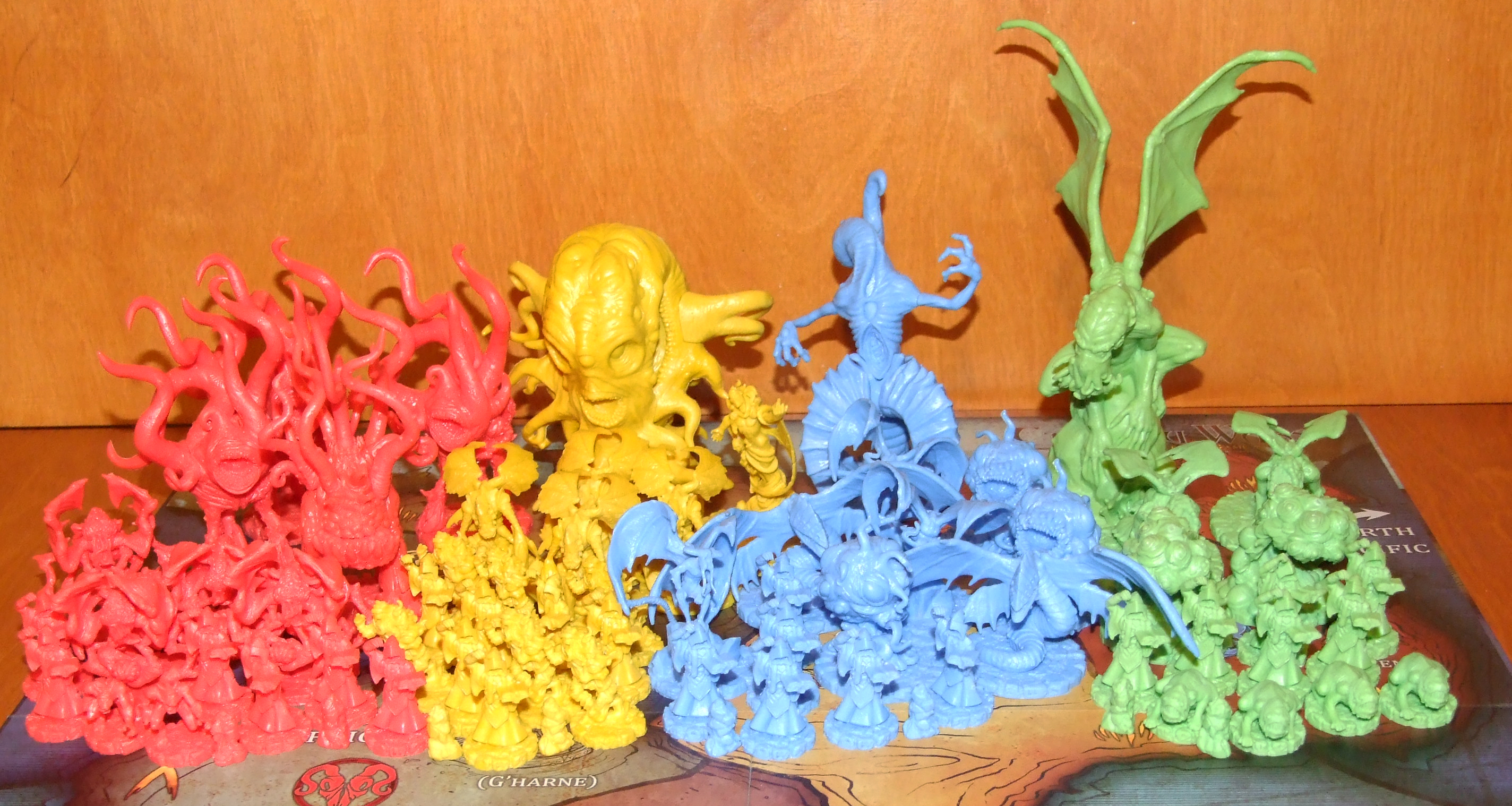 First thing during the turn, is to determine the order of players. After calculating the current player power, one with the most of it will get the first player token. Then, the first player decides whether we play clockwise or counter clockwise. Power will continue to be used as the currency to pay for our actions. The next point of the turn, is to count victory points. If at this point someone reaches 30 victory points, it means that this is the end of the game. After counting, we have the ability to perform an annihilation ritual, that gives you additional victory points – this is possible even if someone starts the endgame. All players uncover hidden victory points, count them, and the player with the most wins the game. Another variant of ending the game is to perform the final ritual of annihilation – the number of rituals available are determined by the number of players, once launched, we return to the game to complete victory point counting and finish. If the ending does not happen, we can go to the main part of the turn. Now we can do one of the available actions by paying for it in power, in the repertoire we find, among other things, the movement on the board, summoning units, opening the gates, starting the battle or using any of the faction skills (eg. from the spell books). Once the action has been completed, the next player takes his action and so on, it continues until all players are unable to perform any action or say they pass.

The mechanic of the game that cuts Cthulu Wars apart from the euro genre, is battle. Dice throwing festival, the height of randomness typical for ameritrash games. When doing battle, both players count the dice pool of their units and throw them. Each result equal to 6 is the death of one enemy unit chosen by its owner. Each result of 4 or 5 is a temporary wound called “pain” assigned to units by their owner. Finally, after dice assignment, wounded figurines must retreat to an adjacent space. It’s simply – larger army means more dice, more dice are more chances to have 6 on them. A joyful clash between the old ones and their minions. 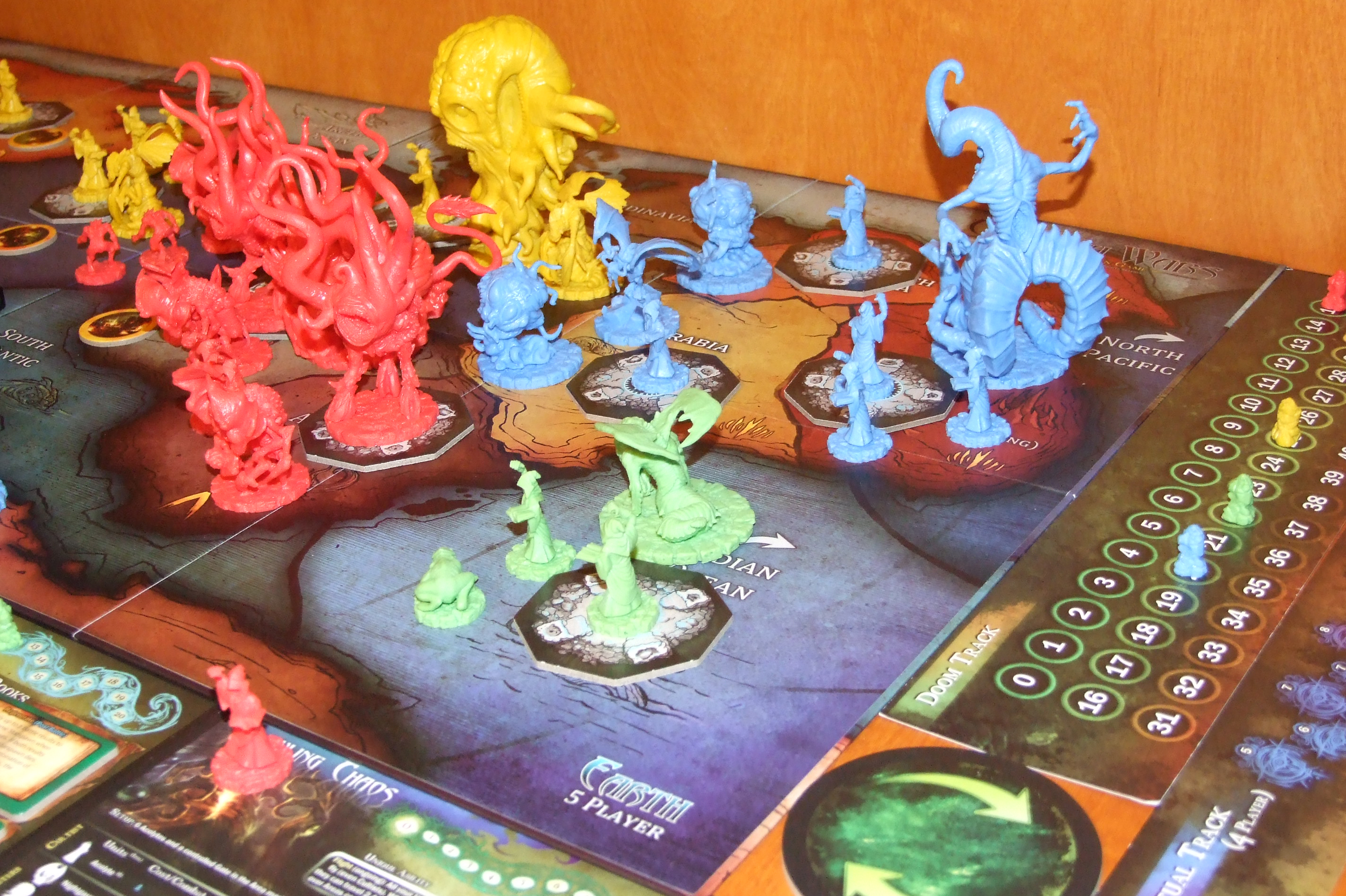 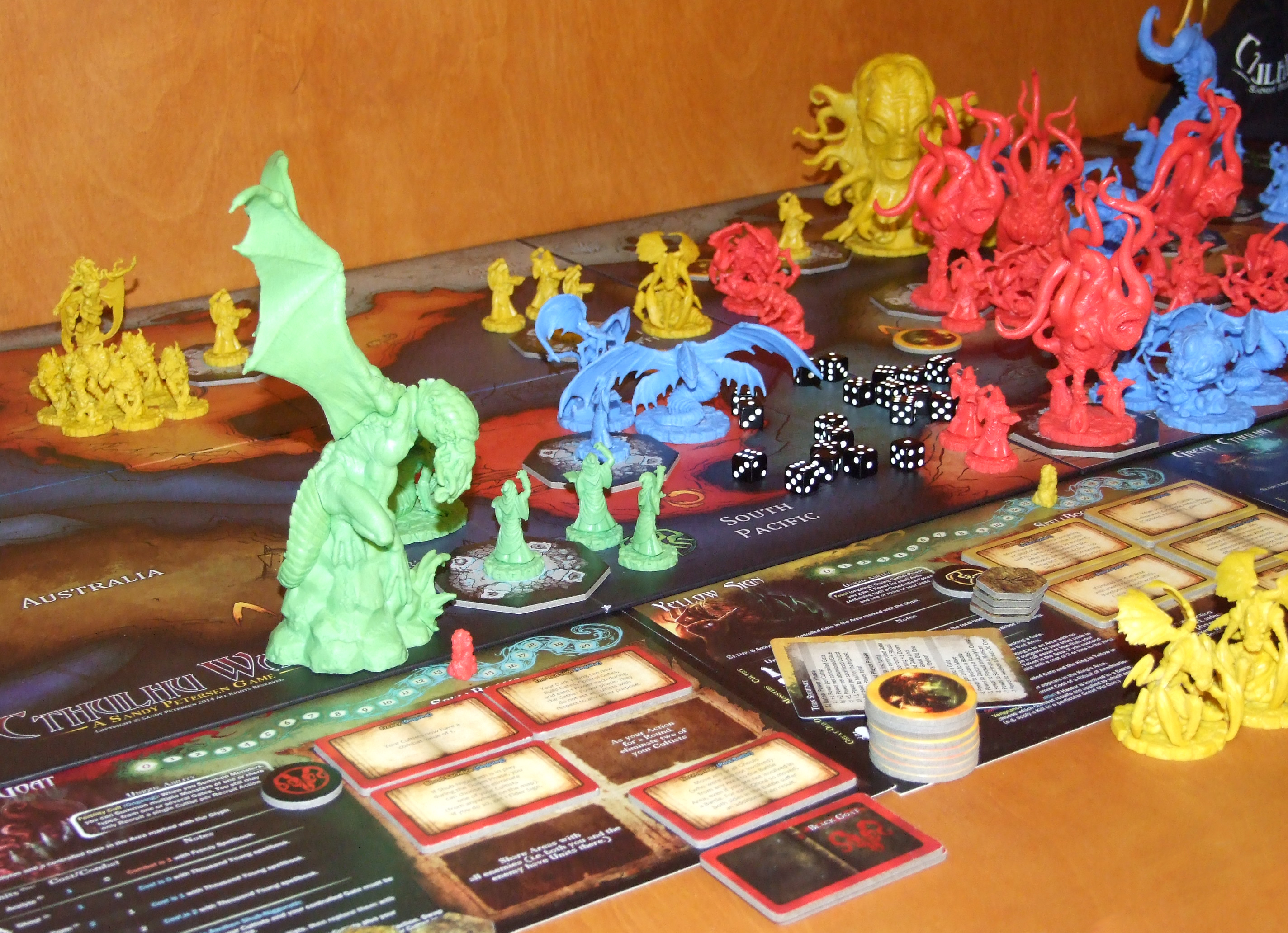 One play in 3-4 player group can last about 4 hours. It would seem that by making individual actions and being limited by action points, everything goes fast. In fact, waiting for your turn to make an action can be felt. This time will increase, if you find that one player has significantly more power points than others. In my opinion, the asymmetry of factions in the basic edition is illusory. It is visible in various skills and units. But it all loses its value for several reasons. The first is scripting your gameplay. By playing a particular faction, we have no way of trying to implement any of our own strategies, if you want to win it, do what you are good at and count on luck. We are even forced to start playing with a specific spot on map dedicated to our great old one. Players who play this game for first time, are almost always doomed to lose, trying their own strategy. An experienced player, who knows the perfect script for his faction will dominate them. If, on the other hand, 4 experienced players follow their faction scripts, the game will gain, because everyone will try to prevent the opponent from doing so, while not straying too far from their own strategy. In a even duel, it ultimately boils down to who is more lucky. Someone will have more of it when picking secret victory points tokens in the form of the elder signs, while others will gain luck when throwing dice. I will add that there is even a chance for Deep One, called in my playgroup “Mr. Froggy”, throwing only one die to slaughter one of the old ones – and this can be a downer for the game, in which the great old ones are considered powerful  superior beings … 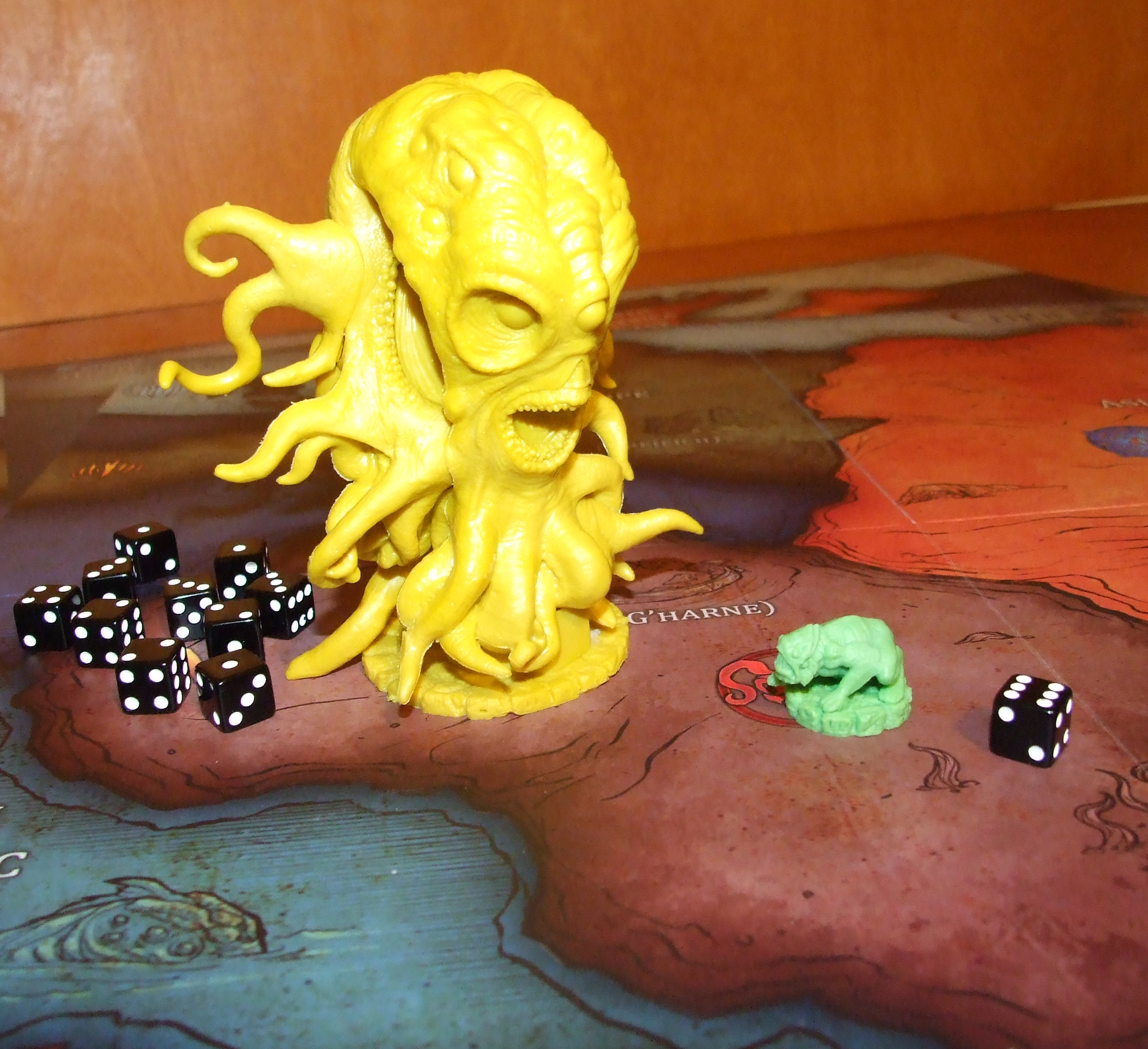 In my opinion this is not a good game. Its mechanics are mediocre, the plays are repetitive, and as for the strategic control of the area and battles between ancient beings, which on the mere mortals are bringing madness, is too random. The price is only justified by the figurines. But all this does not change the fact, that once in a few months I like to refresh it and enjoy pushing large chunks of plastic on the map, and throwing a handful of dice. I would include it in my “guilty pleasure” category – it may be a clunky game, but once in year I will be happy to play it.