A sophisticated, lazy (as you don’t even have to move it) version of a dice cup – that’s the way I would define the dice tower. Going by the wiki definition though “it’s an object used by players to throw dice fairly. The dice fall from the top of the tower and bounce off various platforms inside, until they reappear in front. The purpose of the tower is to eliminate some forms of cheating used when throwing dice by hand. There are many forms of towers differing in assembly and construction”. 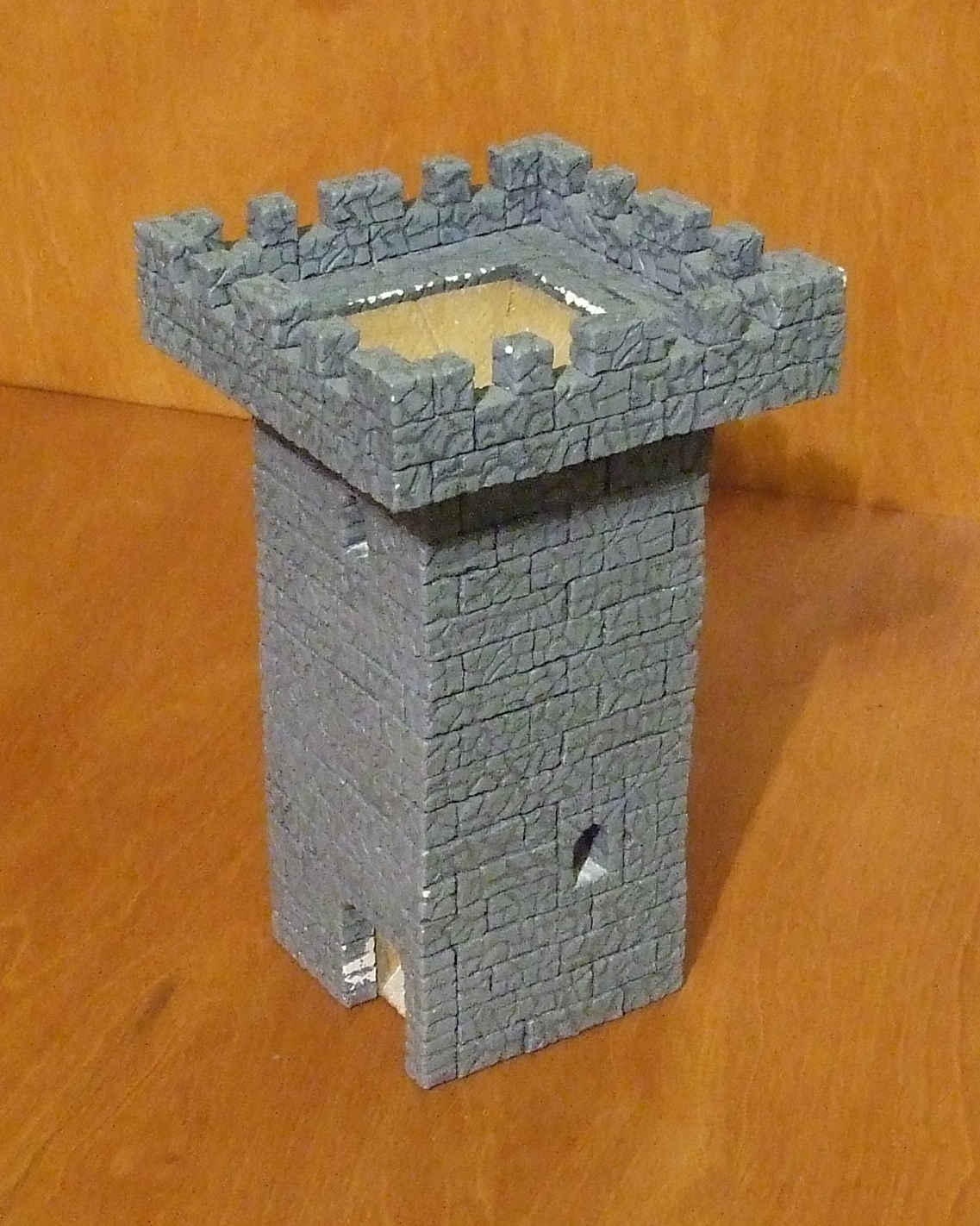 Fun fact: such towers have been used by board game and gambling geeks since the 4th century. However you look at the lovely Wikipedia definition along with the fun fact – the entire thing can still be summed up as just a fancy dice cup, then the 4th century may in fact be simply a point in time from which a preserved tower was found. I am almost certain that the popular “it stopped on the edge!” or “they didn’t roll!” accompanied rolling dice since  2000 BC (as some examples found in Egyptian tombs date that far back). And since there were cries of unfairness there also existed a need to guarantee somewhat fair rolls.

Having dealt with the seemingly substantive introduction, let us move on to the tower itself. Specifically – let’s make ourselves one or two. I started pondering the matter some quite time ago and I built a mean, tall tower out of wood and plaster, which looked like a piece from a diorama for miniature game – the problem is, it’s too large and inconvenient for playing anything else. Later, a friend mentioned that it’d be nice to have one made of plexiglass. It could even light up, or have some other interesting features – I took mental notes, and since his birthday was recently and he has started playing Marvel Dice Masters, I decided to gift him such a tower. 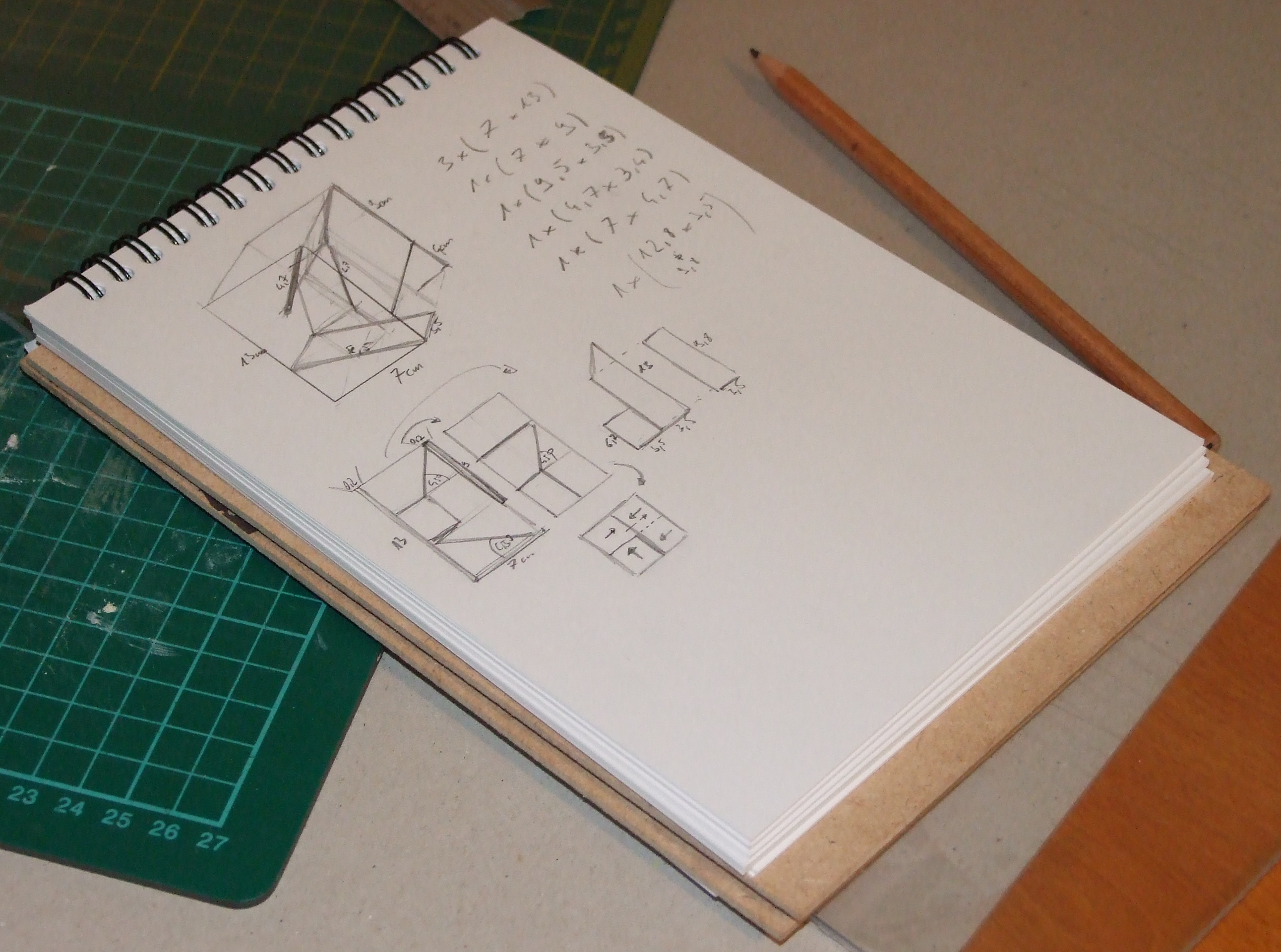 Materials: a sheet of transparent, smooth plexiglass, a piece of cardboard (for a prototype), hot glue sticks. 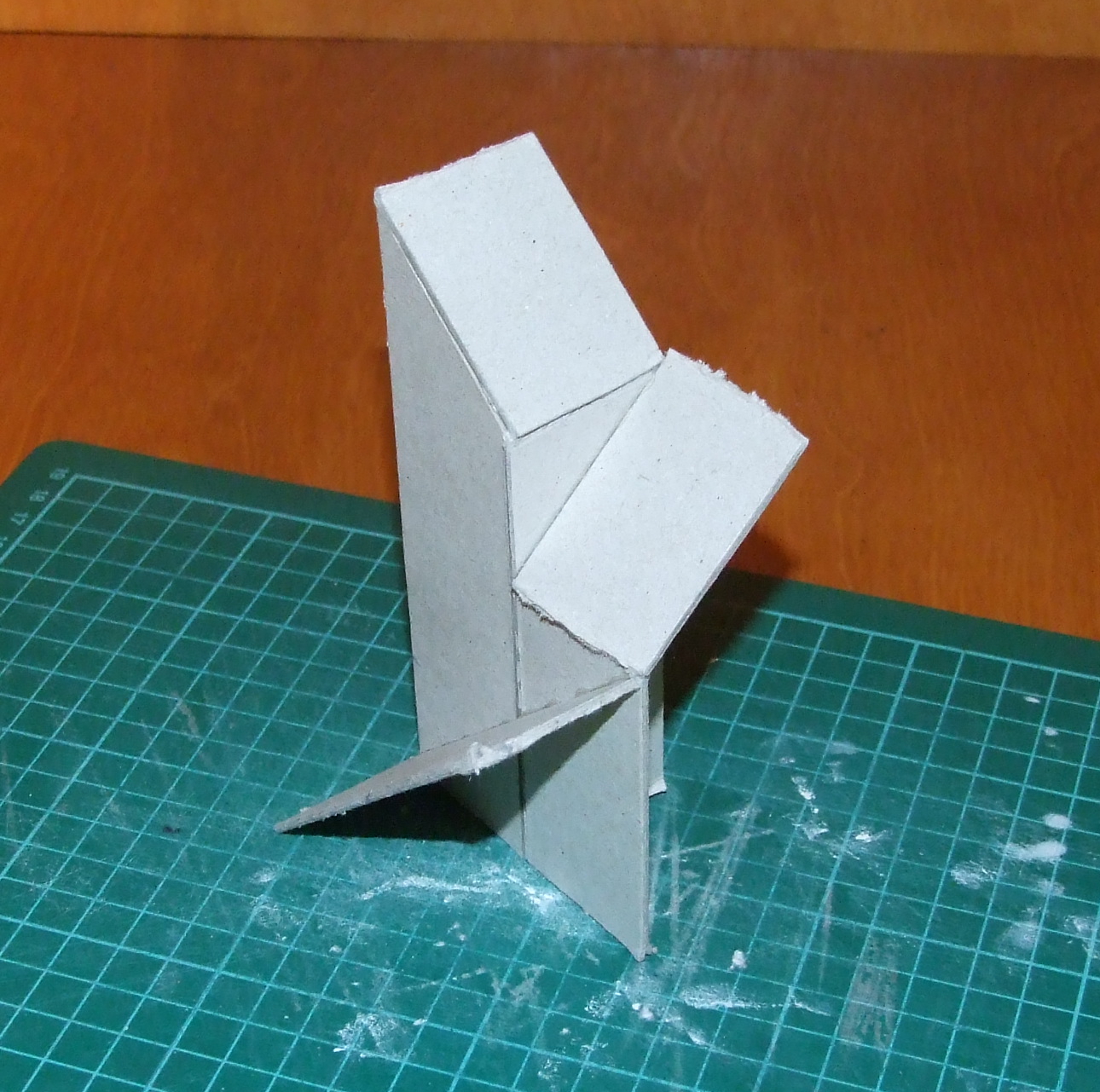 The first thing to consider is how our dice should roll. Commonly used towers have staggered platforms inside. However for me that is not enough, my tower has to allow the dice to roll on at least two courses and the fall is on a 45 degree angle. Because of that my plans involved setting two staggered platforms and one inbetween them, rotated 90 degrees. This way, out of the dice thrown inside, some will fall from the first platform to the third, some will bounce off the second as well, and some will be able to fall directly onto the second and third or just the third. With that we have four courses the dice can roll. To be sure, I made the inside of the tower out of cardboard, to be able to evaluate efficiency of the design before I cut the plexiglass. The dice rolled splendidly – the only adjustment I made involved the exit opening, which initially was too short and blocked the dice when they fell from the last platform. Despite all the estimates and calculations, it’s always worthwhile to make such a prototype – it’s neither expensive nor time-consuming and it saves the trouble when working with the actual material. Of course if you like, you may stop at making the tower out of cardboard and cover it with some nice texture. 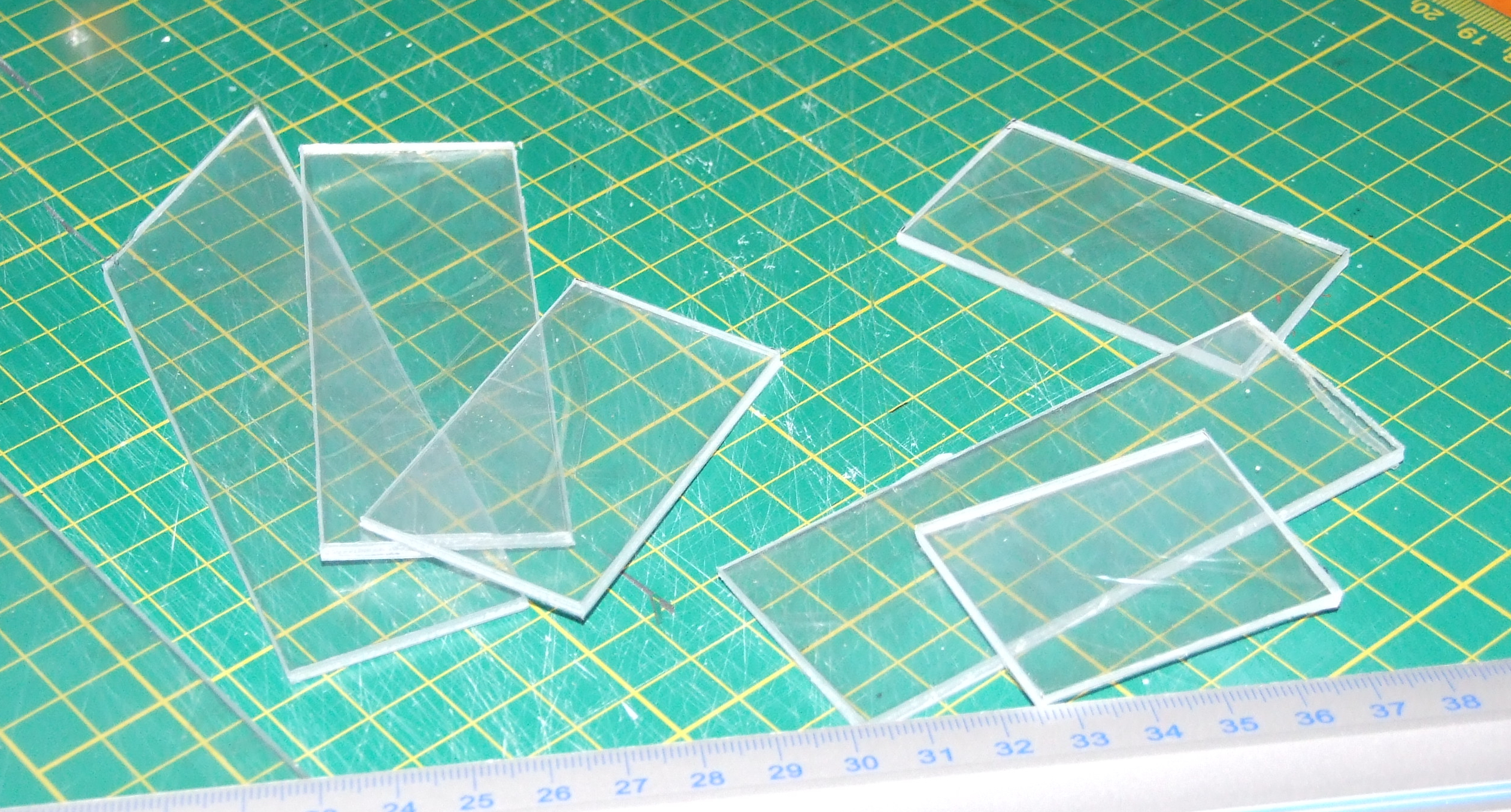 After the cardboard prototype, I got around to planning out how to cut the sheet of plexiglass. I’m able to cut and break it without additional damage only when I have to make convex polygons, so I first divided it into rectangular stripes, which I further divided into smaller squares and rectangles. Having drawn out everything, I made shallow cuts on both sides. I did that for bigger pieces first, to broke them along the cuts, then I cut and broke the smaller parts. Of course, the whole thing came out slightly uneven on account of parallax, but that can be completely ignored because of the thankless tool that is for me the hot glue gun, which I will mention later. It’s good to sand the cut tiles, preferably with fine sandpaper. You only want to smooth the edges lightly. 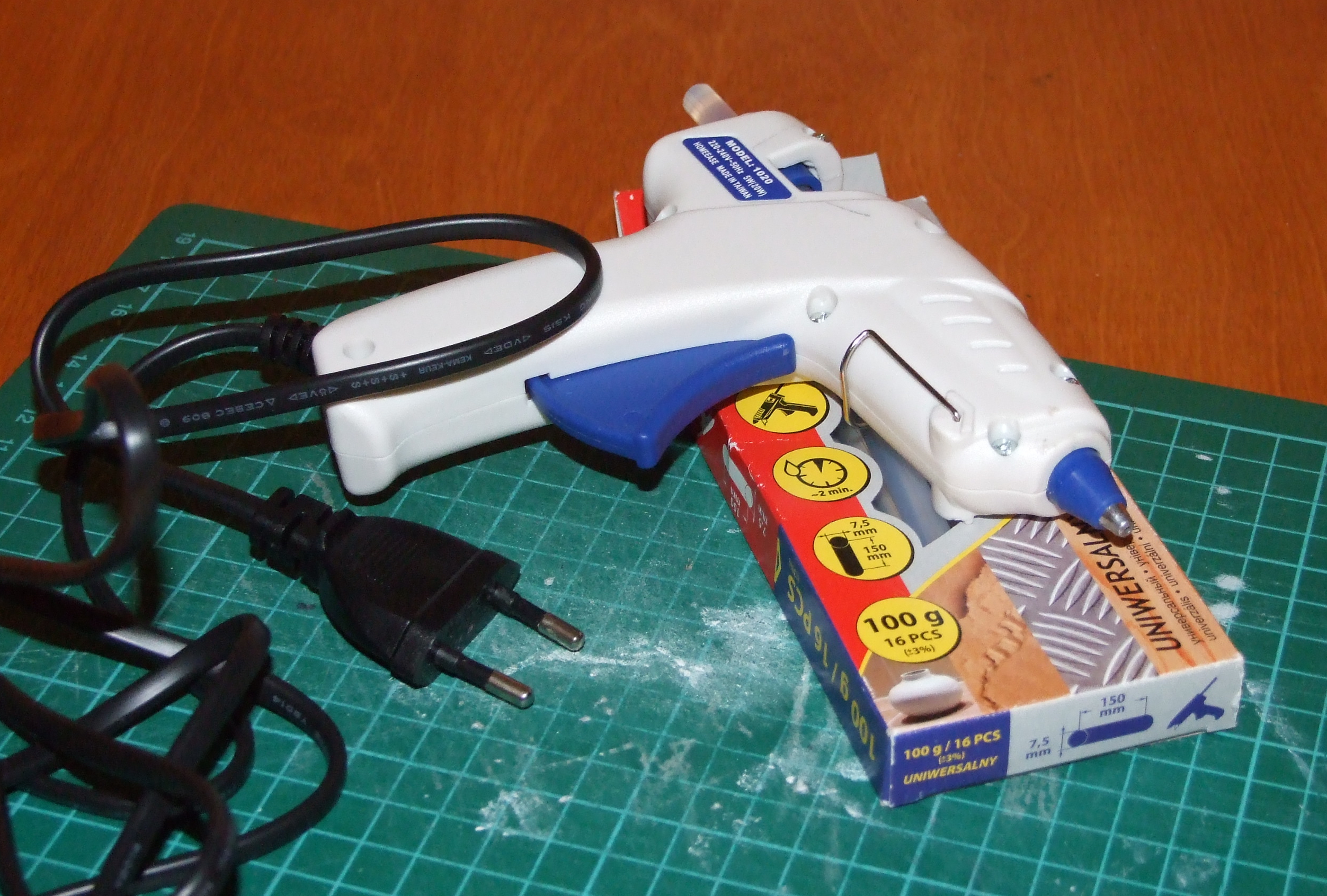 And moving on to the chore that made me start the work with plexiglass over a few times. Unfortunately, I wasn’t closely familiar with the cooling time of the glue, there was also the irritating quality of making glue strings which stuck to the sides. Which resulted in juicy curses thrown in the direction of the offending tool – maybe the reason was the fact that I have the cheapest gun possible, perhaps it was just my inability in using it. Anyway, after a few attempts and repeated cutting of ruined plexiglass pieces, at last I managed to put everything together. File down some unruly unevenness of the base, clean and polish off the glue strings, which I couldn’t avoid, and it’s finished.. For the whole thing I additionally made a practical box covered with a digital collage of superheroes from scans of various Marvel’s comicbooks, which I’d pepared earlier. And the gift is ready. 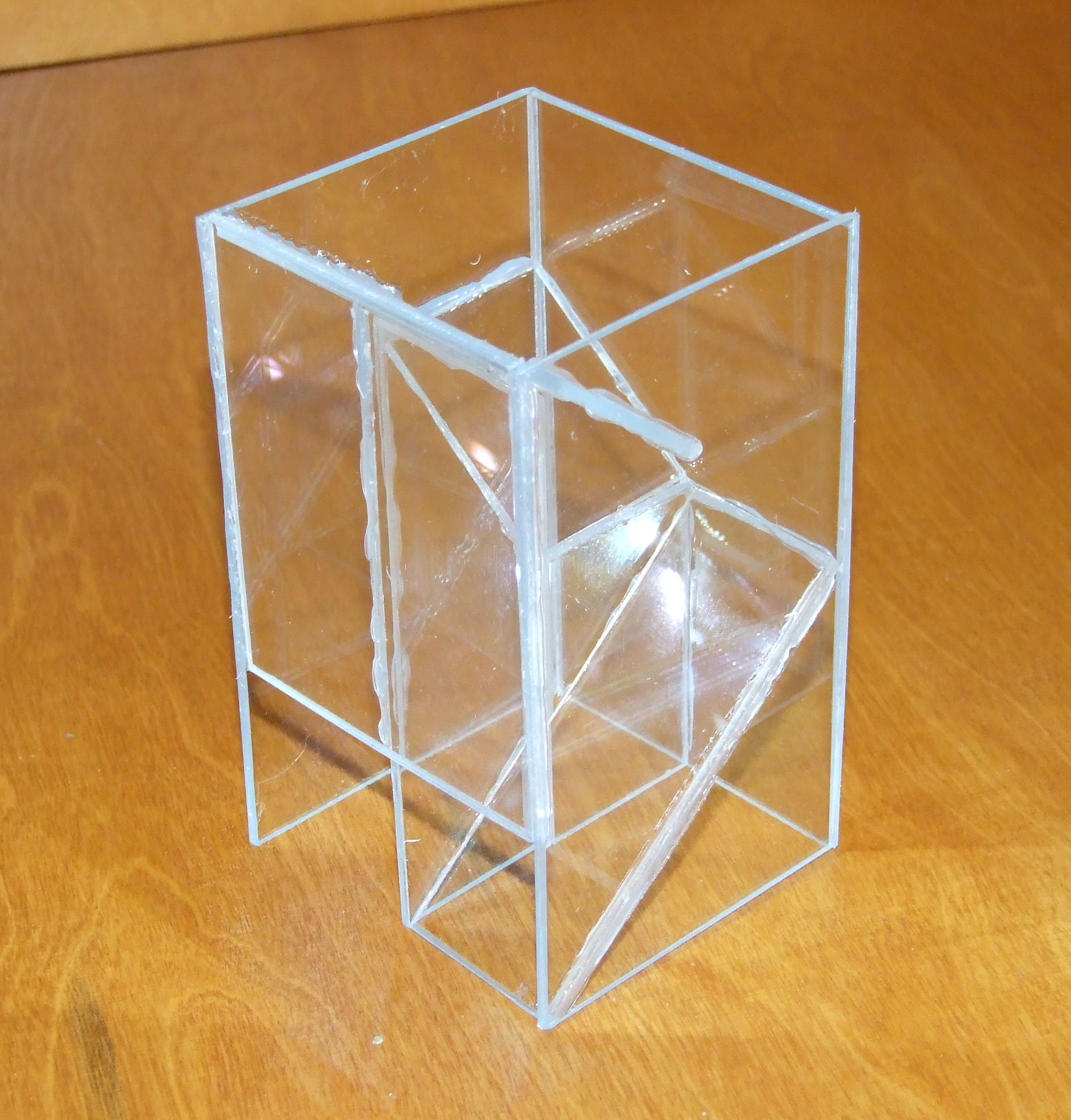 Finally, a little pat on the back for myself – in my opinion the tower looks and works great. To be sure, I performed some stress-tests by squeezing and knocking it over. During washing it under a strong stream from a shower head, an unplanned stress-test happened – a fall from about a meter straight into the bathtub – and a moment with heart in the throat and a curse at the end of the tongue when I thought that it didn’t make it – the beast endured. If you like my design, you can find the plans in the Download section. However do remember to measure and adjust everything to accomodate the size of your dice.