On that hot night we burned ICE, from the window in the distance one could see a constantly working Beanstalk. Outside, a myriad neon lights that never slept attracting hundreds of moths, but in Raymond’s room only the monitor screen emanated with bleak light – except for the LEDs on the casing of Cyberdeck. It looked fairly ordinary, a standard Haas CS-7, but I’ve modified it so many times, you couldn’t find a trace of the original circuits in it. From time to time we’d manage to peel another layer of the conspiracy onion…

We impersonate one of NAPD (New Angeles Police Department) detectives. We have different backgrounds, different lines of action – we each have our own intuition, and there’s a case to solve. Android from Fantasy Flight Games, a colossus of a game. A thematic masterpiece, mechanically it’s a euro trash hybrid. A marvel from Daniel Clark and Kevin Wilson from 2008. A game so complex, it takes two hours to explain what each element is for and what you can do in a turn, and then people sit down to a five hour game only to get to know it a little. So heavy that you need at least a few days to pass, to process what actually went on. All that could be very discouraging, so what is it that makes me love the game so much? 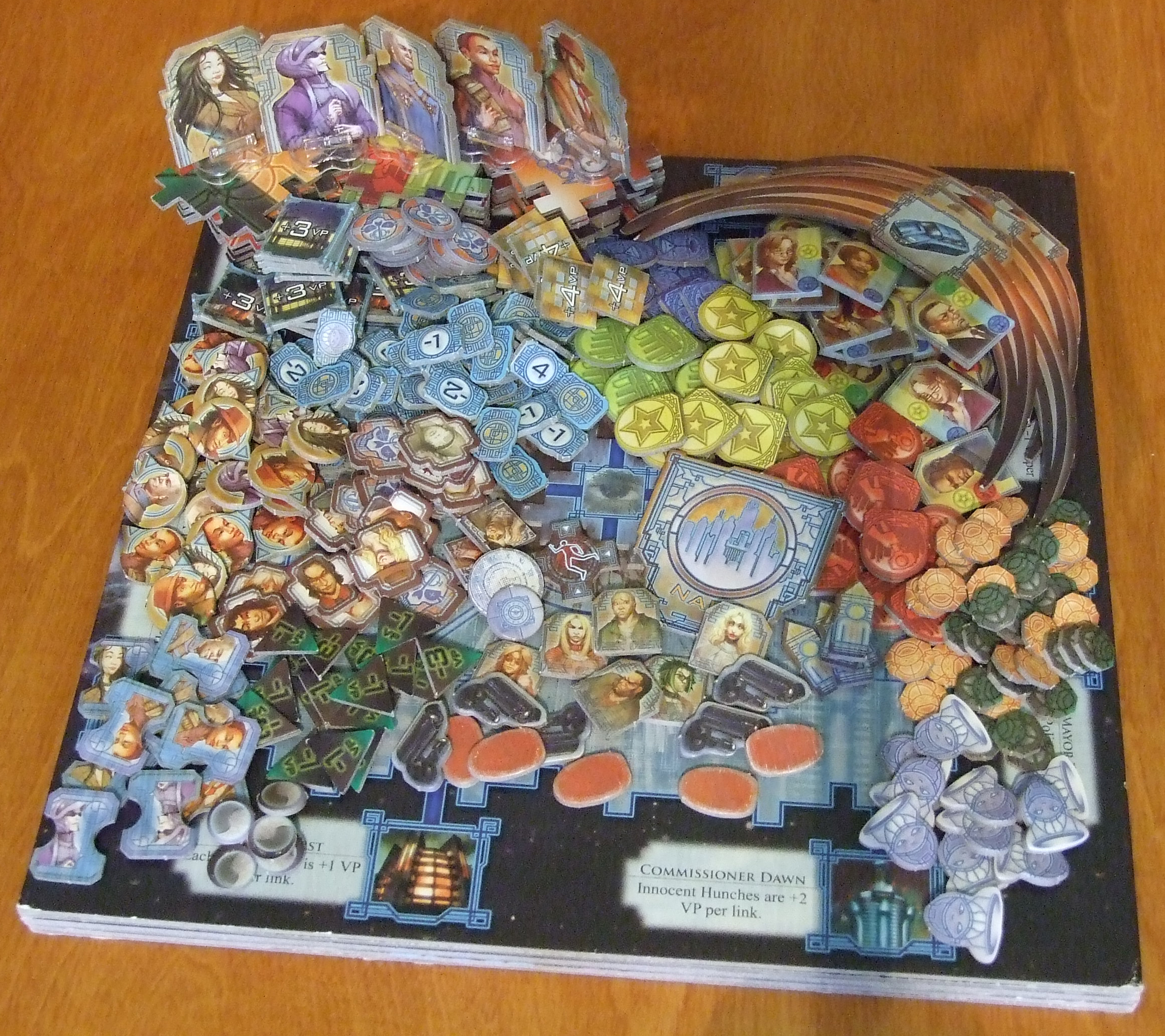 The first layer of my affection is based on the components – superficial, isn’t it? In the standard box we get kilograms of tokens, tiles and markers, large character and scenario sheets, a couple of decks with dozens of cards and finally a big (90 x 60 cm) gameboard. All that is wrapped in wonderful graphics which drive the players right into climate of cyberpunk. Electric neon light of the surroundings, mixed with eternal night, dominates, bringing a heavy, stifling mood – unpleasant and yet gripping, hypnotic. The only fault I could find are some of the character illustrations – they could’ve been done better. Everything else reaches to us with inviting wires, encouraging us to plug ourselves into this unusual reality and never leave. 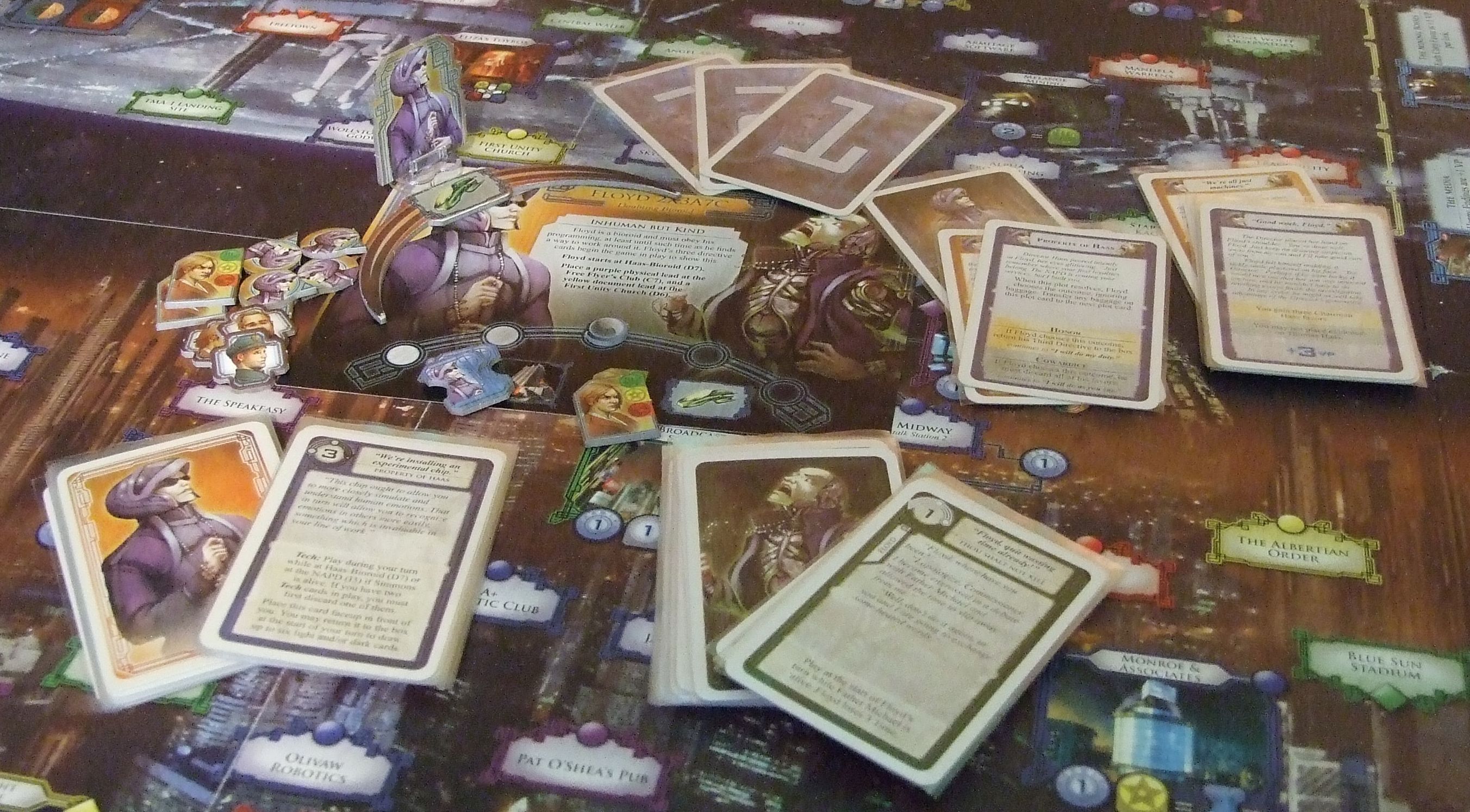 The second layer is the game mechanics, or should I say their variety. Within the game we can find mechanics of solitaire, hidden agenda, puzzle, victory point chase, asymmetric player powers, negative interaction – all put together into an intricate whole, determined by action point allowance system. Here lies the reason for such long explanation of rules – during the game, the mechanics turn out to be simple and well-implemented – what’s overwhelming is simply their amount and the necessity to remember everything you can to utilize in order to win. With good knowledge of the rules, a game can last approximately three to five hours max. 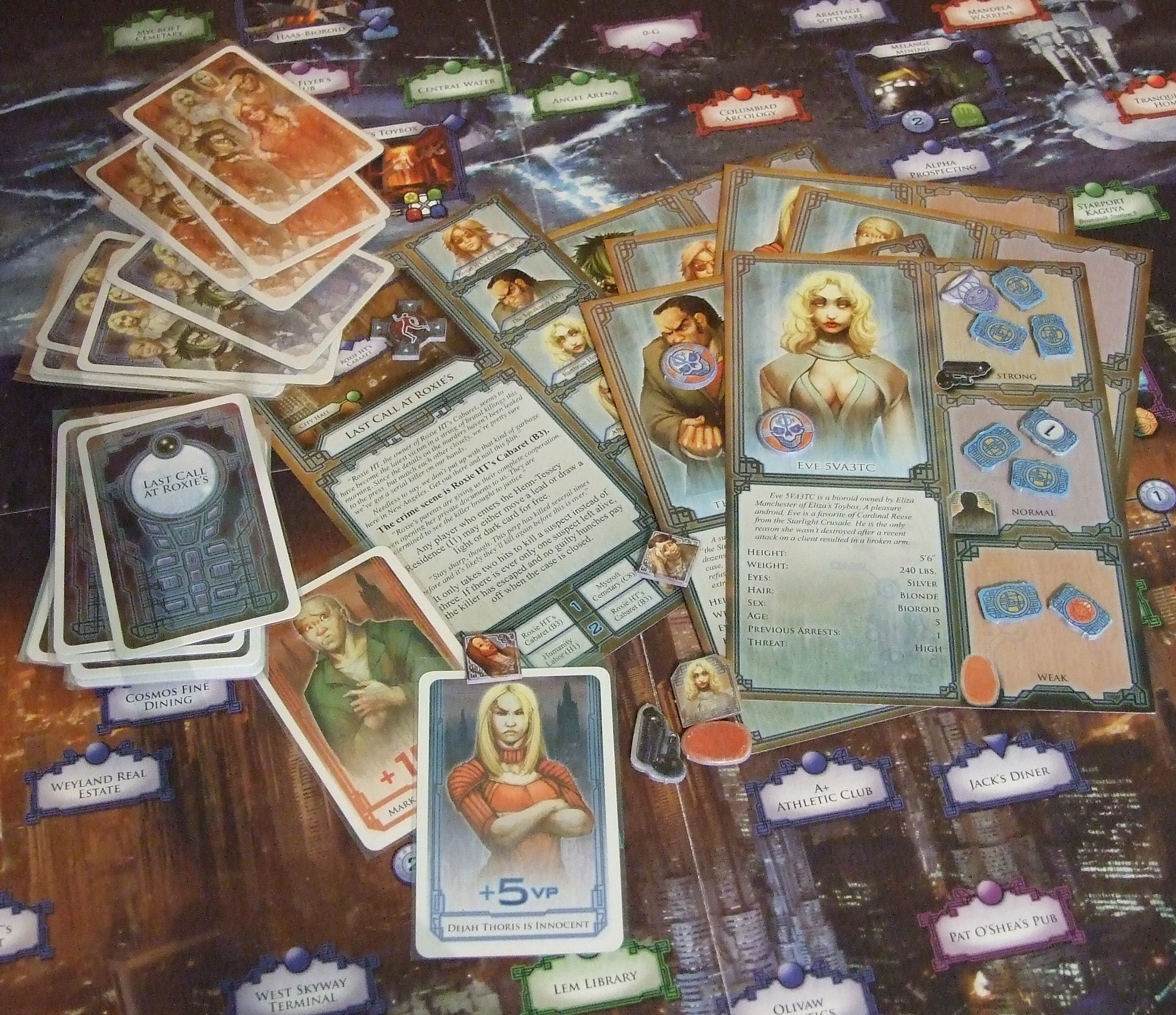 Next in line is the multitude of layers of the gameplay, regarding its content. We can be a tracking dog, running towards the goal, guided by the clues and his own intuition. We can focus on the bigger picture, provided by the backstage conspiracy surrounding the town and the events within. We also have the opportunity to shine, regarding personal development or downfall of our character. These elements, which also constitute the fictional layers of Android, allow the players to immerse in a world based on a remarkably successful mixture of the visions of Gibson, Dick or Asimov, which leads smoothly into the game’s purpose. 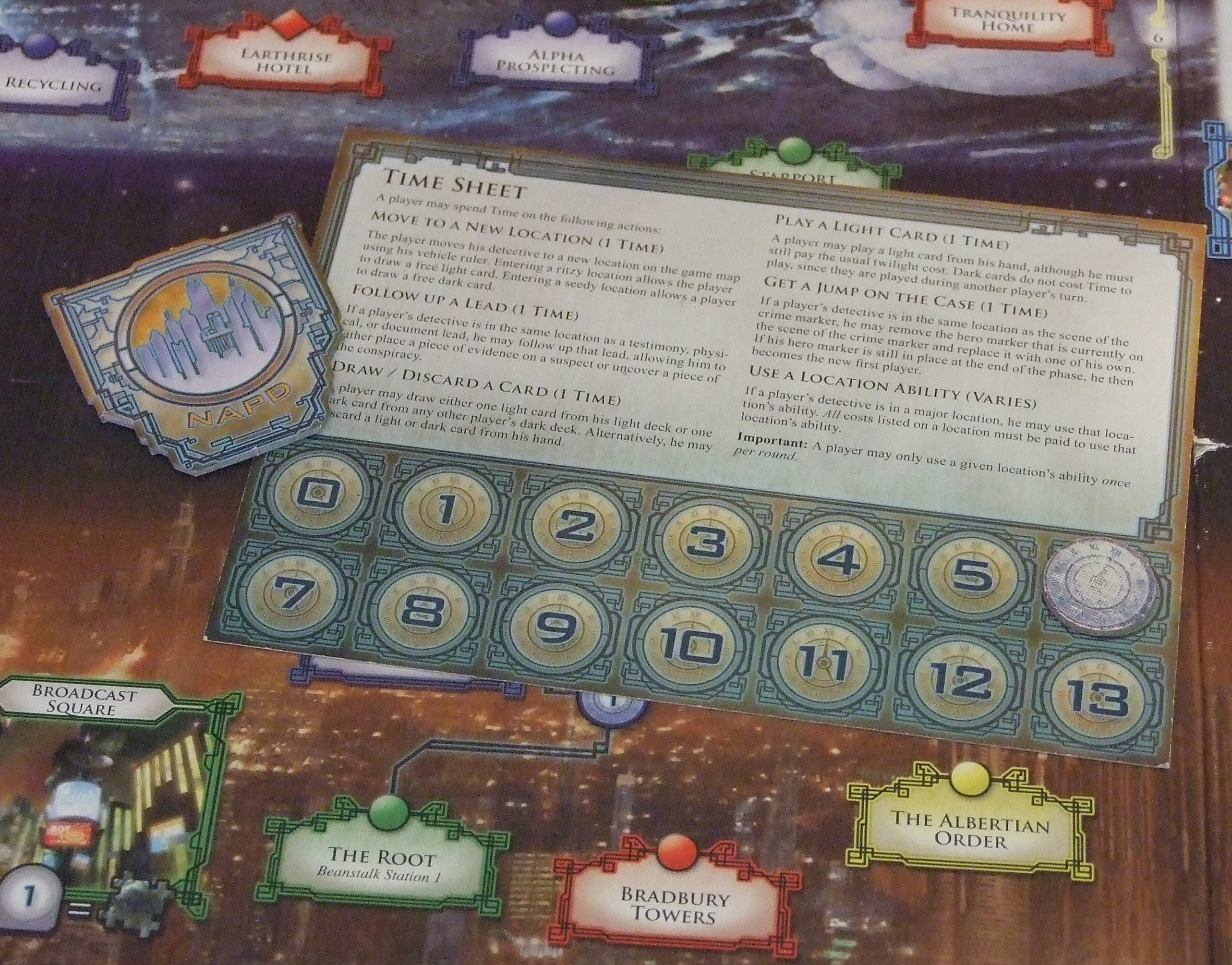 Purpose of the game. I know, I’ve put off describing it, but it’s difficult to introduce it without making it seem shallow and confusing for the reader. Often, because of the way it’s introduced without previously mentioning the content, Android suffered. Saying that the game is about convicting someone for a murder and collecting the most points, would be truthful, but misleading. Despite the presence of the theme of murder investigation, it is not a detective game – the murderer is not predetermined. It’s not an euro mathematical point collector as it would be suggested. I would describe it as a game of journey, an adventure that experiences us instead of the opposite. Ultimately each player wants to convict his suspect, exonerate somebody he considers innocent, positively unravel personal plots and find the best way to solve the conspiracy puzzle, all this while doing his best to disrupt others. For these actions the players receive points and whoever collects the most – wins. This summary may also seem shallow, so let me add that in Android not the reason and outcome themselves are important, but the journey that goes with them. The works of mentioned authors were captured perfectly, where murder is merely a catalyst for the battered by reality protagonist, gradually discovering the conspiracy controlling everything, and simultaneously battling his own demons. In the end the fact that the gardener was really the killer doesn’t matter anymore. 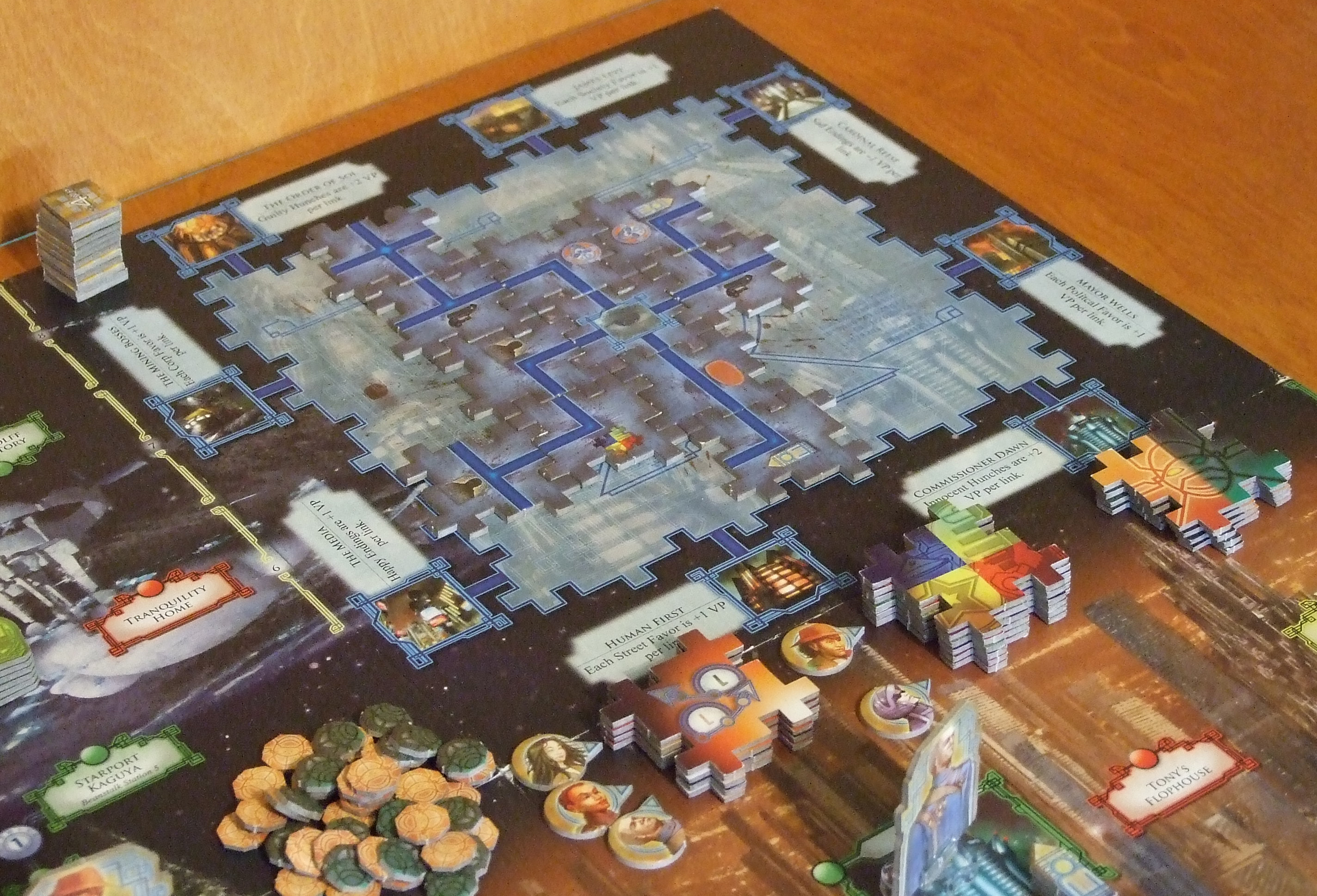 For a fan of heavy s-f, or a person who likes to immerse in what goes on during the game, this position is mandatory. You also need to be patient and persistent, as the game is hard to get to know. Many people couldn’t get through their first sessions. On the other hand, those who made it through the phase of becoming acquainted with the game, appreciate it and enjoy every time they get to play, the stories from which can be told like a good movie. 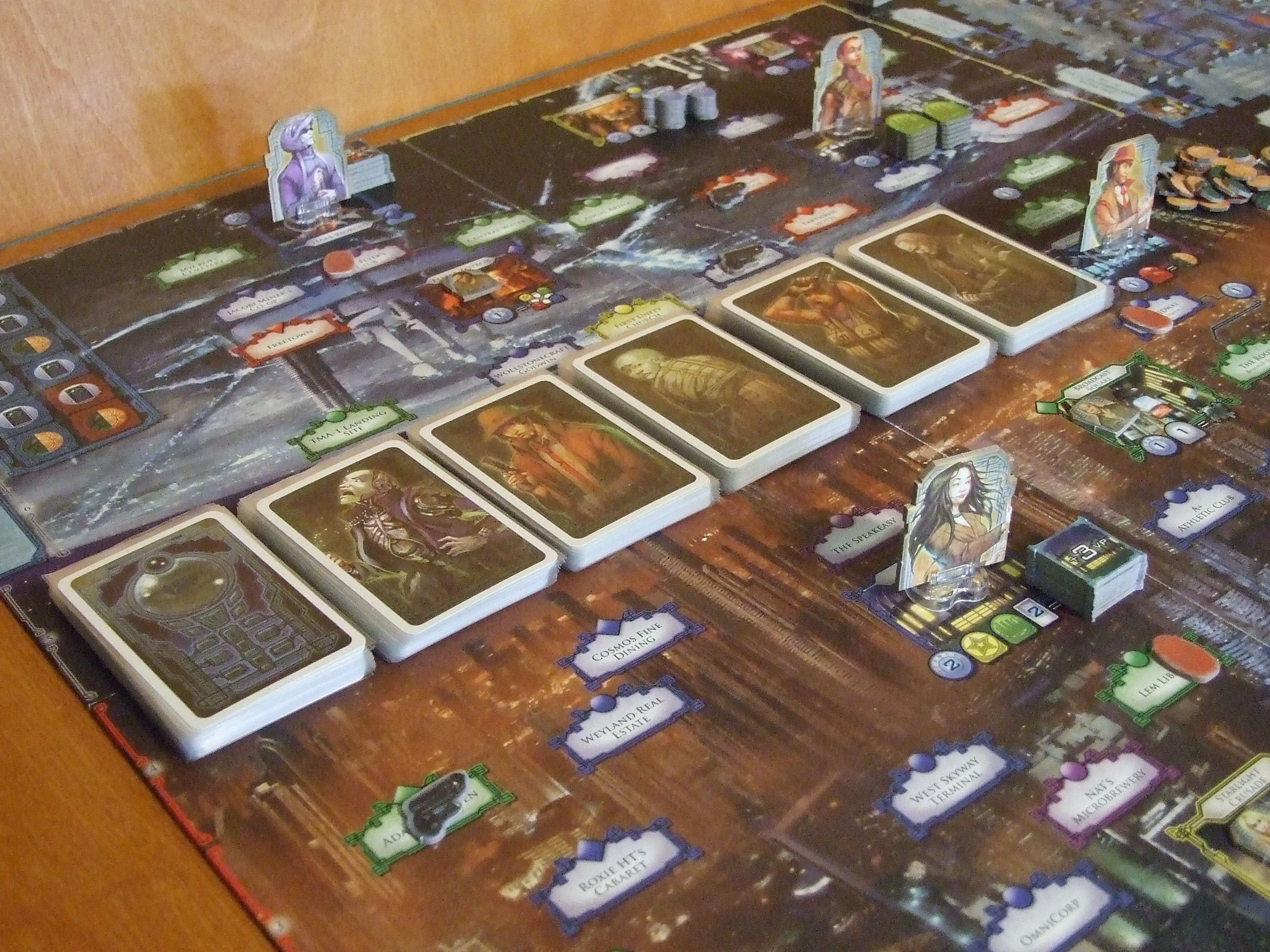 Being a hunter in your department you have your own motivations and hunches, and by following them it was you who lead to convicting the one whom you considered guilty, according to your own theory. Was he indeed guilty? Who cares now, when another case awaits…