Do you sometimes have this strange feeling, that maybe something is not exactly how it should be, when you can find kunai in your back, and shurikens are flying around your head? Yeah, neither do I, and that’s probably why every average ninja manages to surprise me – today I want to show you Tiny Ninjas

It is the debut project of the 2niverse Games publishing company. Ryan Leininger is its designer, and Yela Gatchalian-David and Paola Tuazon are in charge of the graphic design. Tiny Ninjas appeared on the Kickstarter platform in May 2018, to finally be funded by 1474 backers with a collected amount of over 60,000 Canadian dollars. The game is available in two versions, condensed one – under the name of Tiny Tiny Ninjas and the expanded one – which I’m reviewing here. Currently, you can buy it at the publisher’s website. 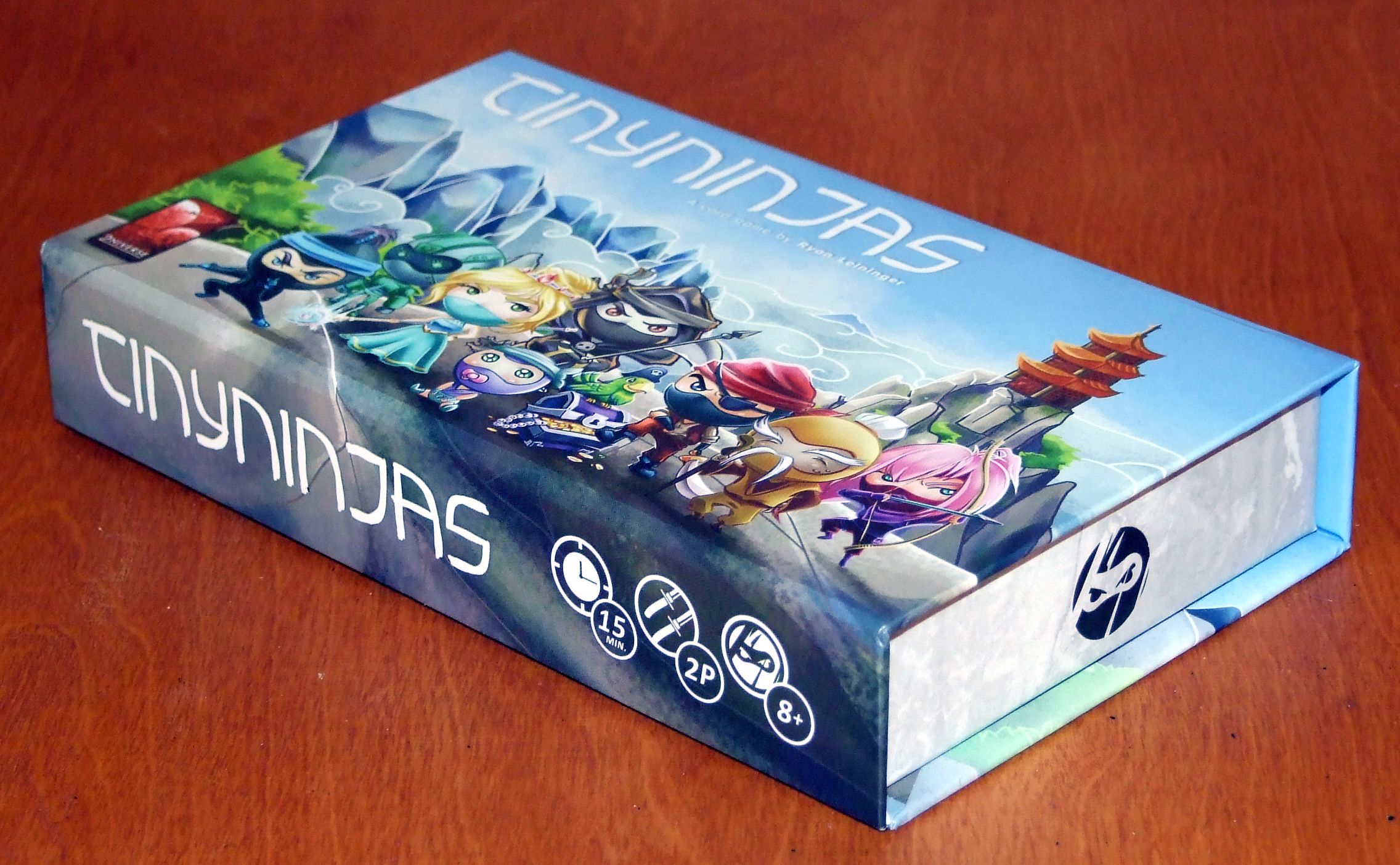 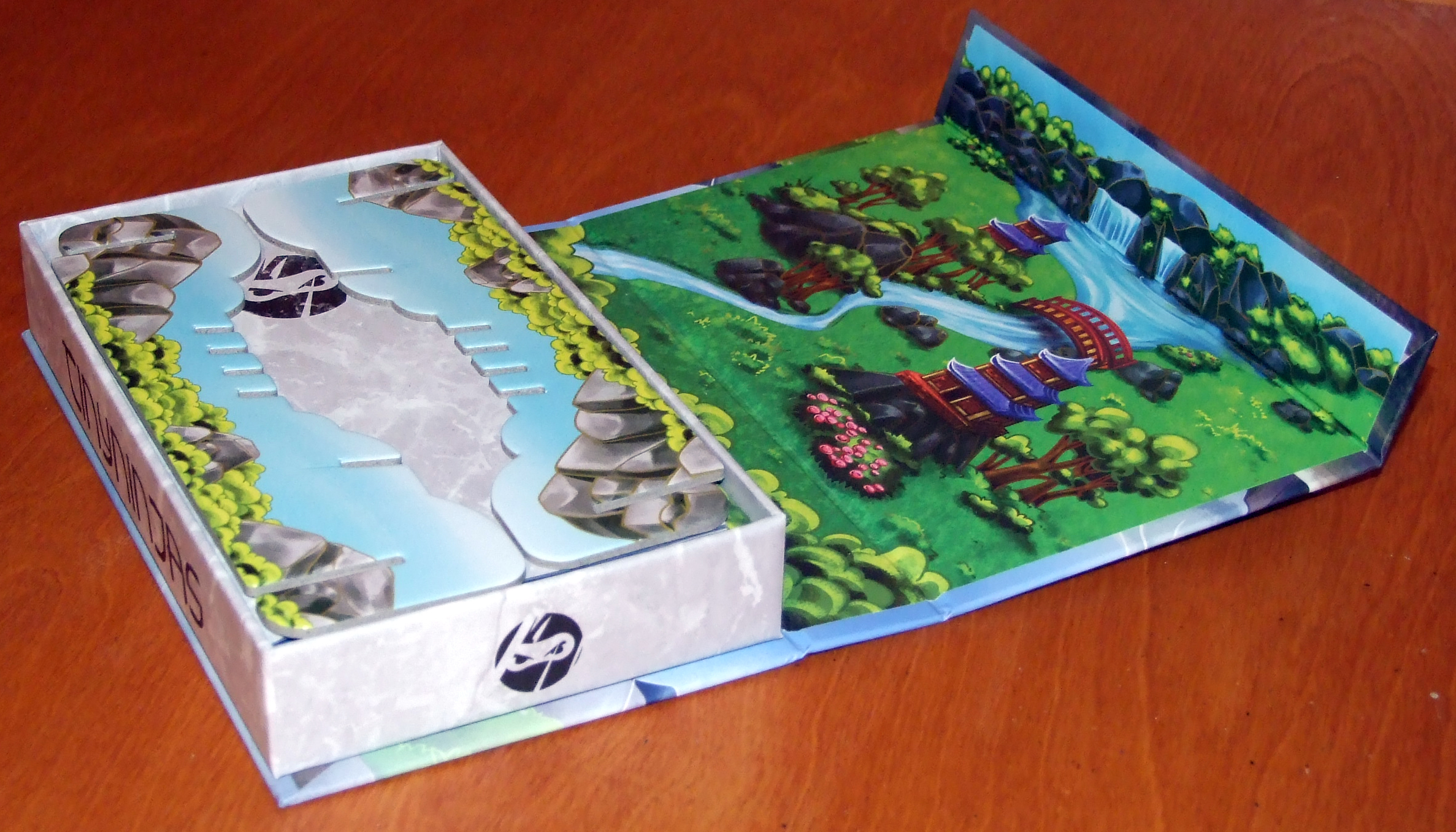 The name of the game clearly suggests its compactness, and indeed we get a box measuring 20 cm x 11.5 cm x 3.5 cm. It is made of two-millimeter thick cardboard and appears to be ultra-durable. It’s like a casket, with neodymium magnets in closing. Inside, in a cardboard insert, we find a deck of stiff, glossy varnished 60 ninja cards. As a fan of sleeving cards, I was going to wrap this deck in plastic after a few plays. However, after a while I abandoned this idea, because I was not able to notice any wear out on them, and I was using Overhand and Riffle shuffling method. Next we have two heavy, 19 millimeter, pearlescent six-sided dice, a rulebook and some cardboard. Health dials, Sensei markers and connector walls for the box. The symbols and illustrations in the game are nice, consistent and legible. The graphic feel fits in with the title, the little sweet ninjas running around on cartoon-looking backgrounds. The whole look of the game has made a very positive impression on me, because at first sight I knew it is a “play anytime and anywhere” type of game. 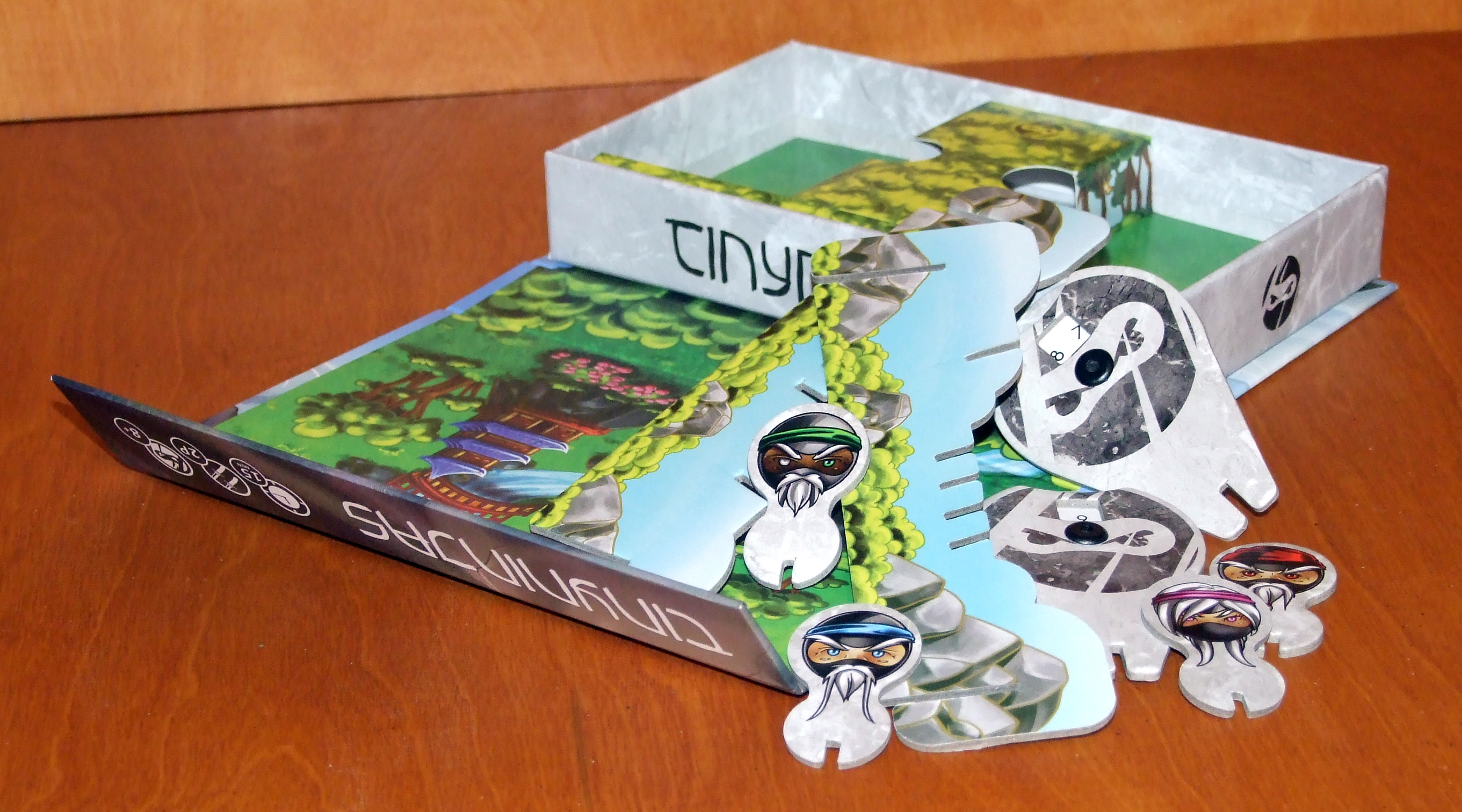 Two sensei face each other in a fight, during which they will use the ninjas serving them. The one whose fighters defend him worse will lose. Thematically, the game works only thanks to the components. It might as well have been a duel of medieval kings throwing their armies into battle, or summoners with some fantastic creatures at their disposal, and that would fit just as well with the mechanics. Whereas illustrations and symbols in the game are designed so well, that they completely carry the game setting aspect. Dice, on which instead of numerical values, we have shurikens and kunais, a box transforming into a battle arena looking like gardens with pagodas and cards with chibi-like ninjas. The tone does not try to be serious and therefore adapts well to the light-hearted mechanics. 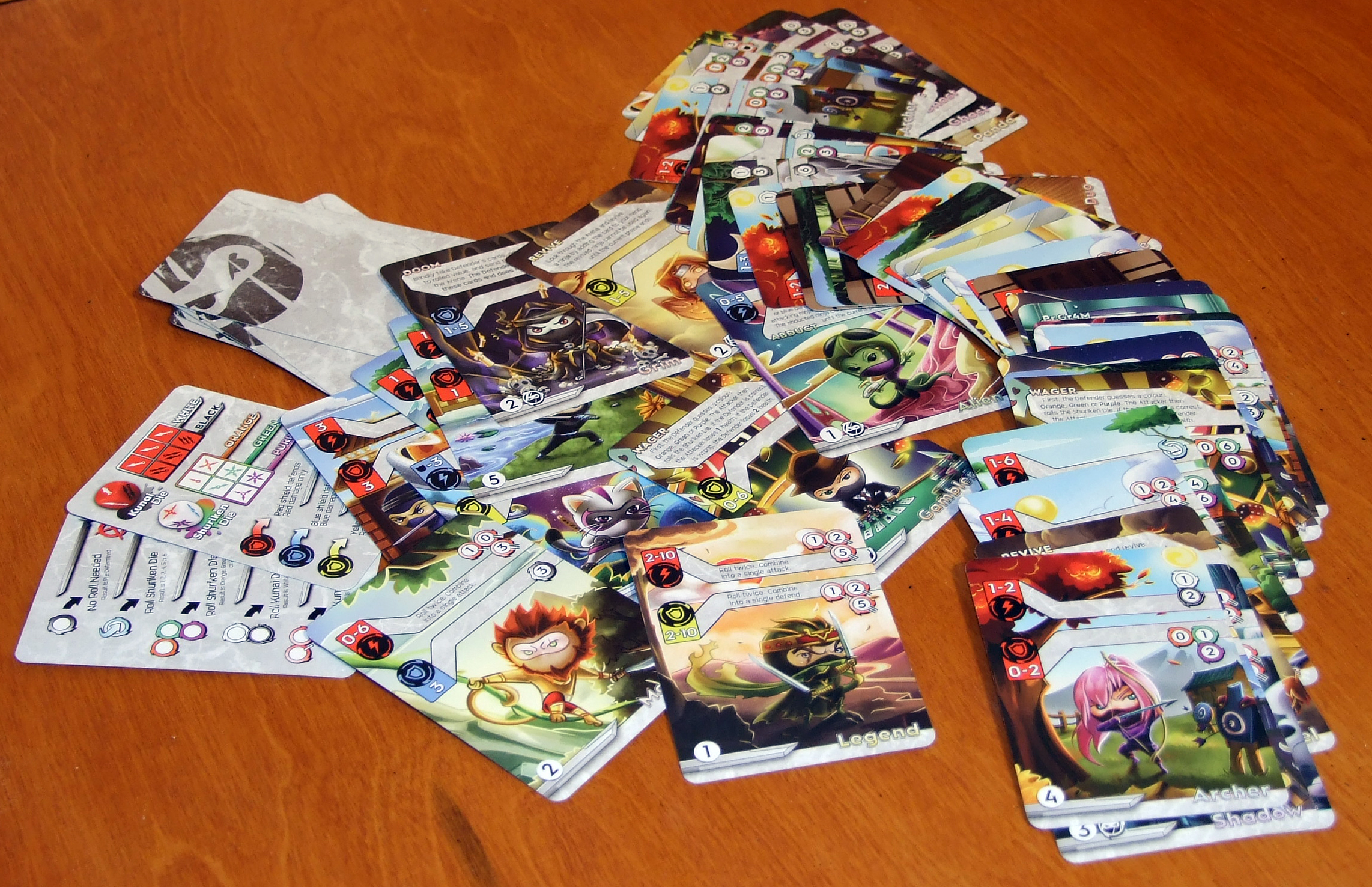 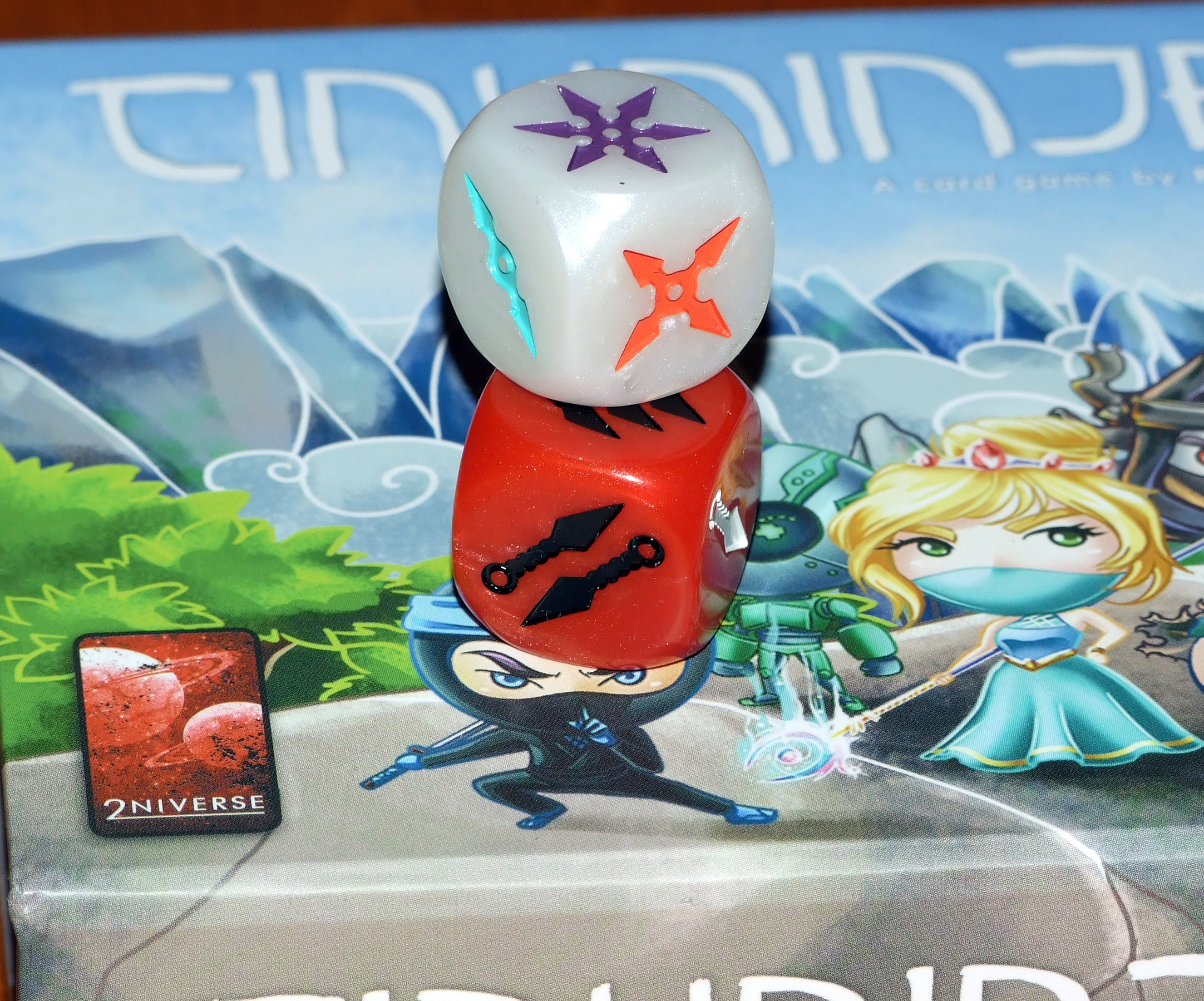 The gameplay is extremely simple. We have several variants of the game to choose from, but in essence, it’s just playing cards back and forth. Basically, each player starts with 5 cards on hand and 10 health points. In turn, one player is the attacker and the other is defending himself. After the turn, the roles are reversed. In the turn, the attacking player chooses one card, throws the appropriate dice and after checking the result, waits for the defending player’s decision. The defender can choose one card and with a die roll defend against the attacker’s result or take damage. The attacker can attack, until he runs out of cards or resigns from further attacks, which is part of “push your luck” mechanics. At the beginning of each turn, the player, who has to attack, draws up to five cards, but the defender stays with what he has left after his attacks. The cards we use have certain ranges of values ​​and information about which die should be rolled, both for attack and defense. Both dice can be used in two ways. The red one can reach a value of 1 or 2, by looking at the colors of the blades (black and white), or 1 to 3, depending on how much kunai is on its wall. White one, depending on the number of shuriken arms on its walls, takes the value 1 to 6 or because of the color of shurikens (orange, purple, green) from 1 to 3. For each of the die result, the amount of damage is assigned for the attack, the attack on the card can be blue or red. The defending player must match the card with the defense color as it was on the attack card, defense in yellow is universal. We play until one of the players loses all of their health points. This is the basic rules of the game. Players will later be able to use the cards which, apart from the usual attacks, have additional skills described on them, or sensei markers allowing to use one of four unique skills during the turn. 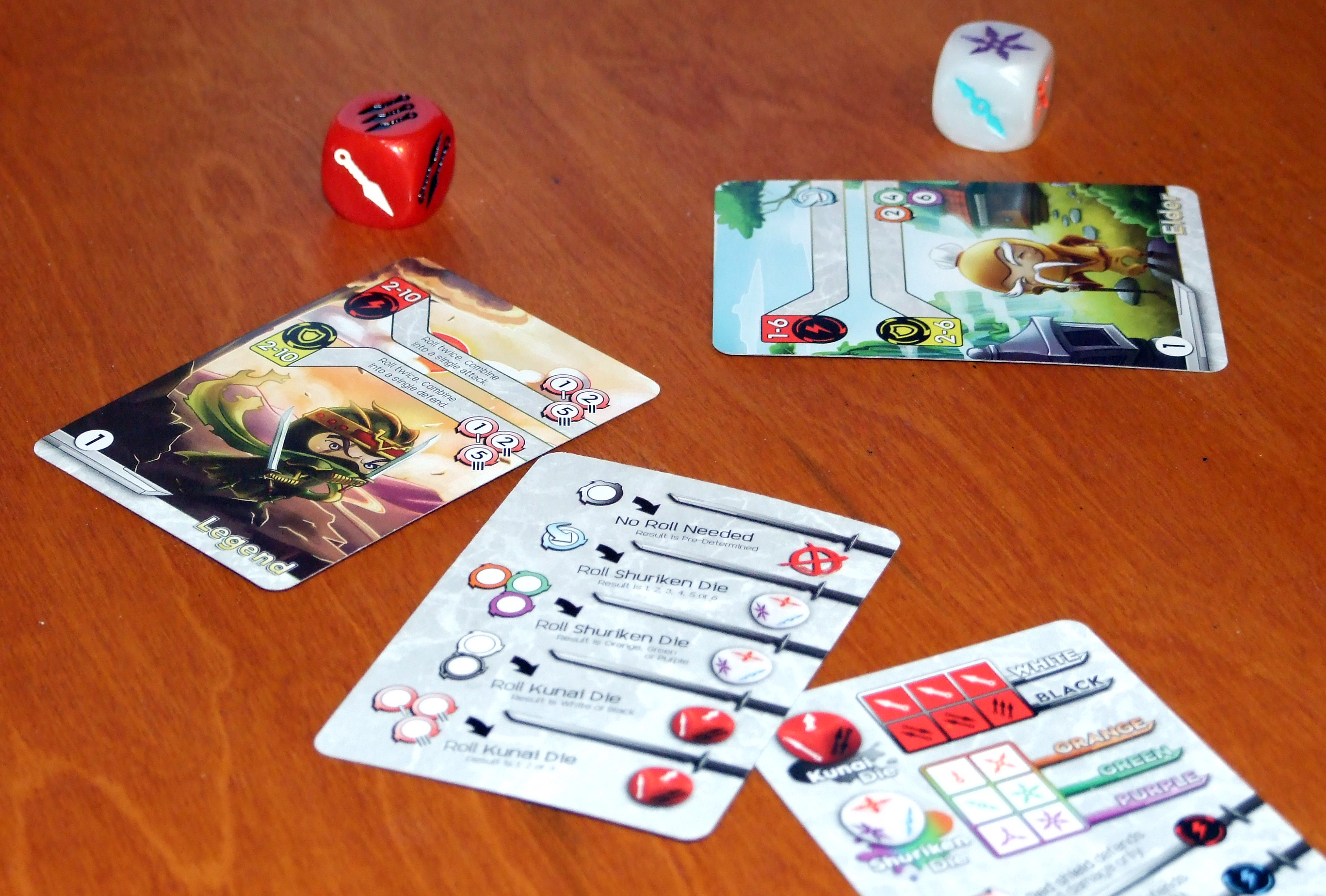 In addition to the basic variant of the game, the rulebook includes four other options:

Solo – where we can play a little solitaire duel with 3 levels of difficulty.

Blitz – in which we start with fifteen cards (we draw 15, leave a minimum of 5 in hand and again fill up to 15) and play until we have no cards in hand – the player with more health points at the end wins.

Champion –best of 5 tournament, up to 3 wins. Where we start with 6 health points and if we lose the game, the next one starts with an additional two health points.

Survivor – we start the game with 8 health points and one additional “Grimm” card in hand, which every turn we can use once to heal by 1 or for its skill (the opponent discards from 0 to 2 cards). This card is not discarded after use, and is not counted to the limit of 5 cards on the hand.

In addition, the author encourages us to have fun with our own variants and, after testing, posting them on the game site. 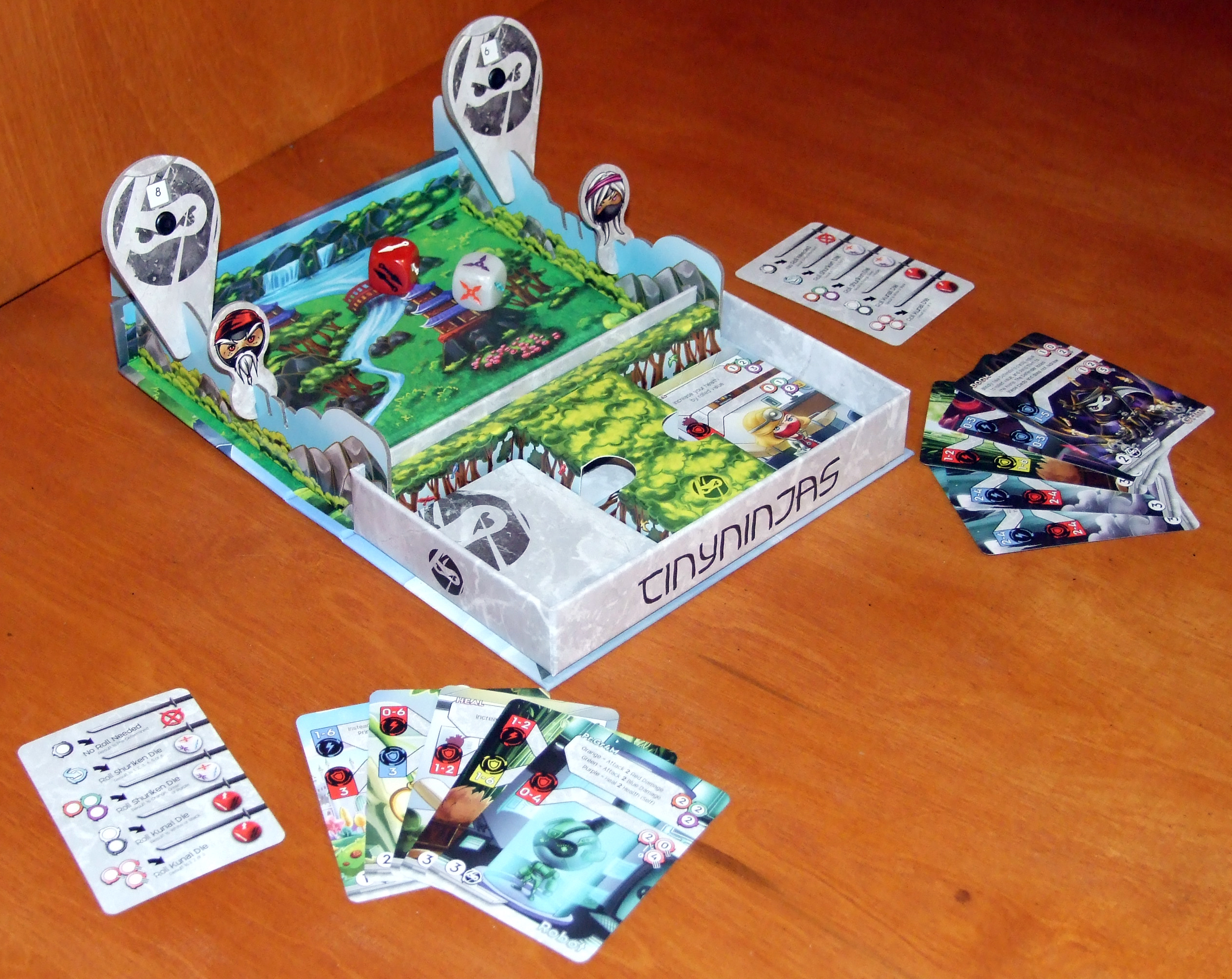 I like it when a game can cleverly use all of its components. Tiny Ninjas can be a model in this aspect. The game is prepared to play in less than a minute, everything  is played in a box, and the quality of components is chosen for its purpose – to play wherever where we like to. Of course, I’m not talking about weather conditions like rain and snow, but you can even play it in the pool, with it sitting on a floating mattress. One play can take a maximum of 15 minutes, it can be played by one or two people. Due to a significant random factor and a limited level of strategies, it is rather directed to a younger or more casual player audience. For more advanced players, it can be treated as a light filler, when we’re on the go, waiting for someone, or someone is making a setup of some heavy game, while we play next to him – because, of course, it’s better for him to do the setup without our help.