Do you love League of Legends, Heroes of the Storm or DOTA2? Or maybe you are a fan of some other MOBA (Multiplayer Online Battle Arena) game, and wonder if there is someone who tried to bring this game genre to boardgaming?

The answer is yes – there are moba-like board games. In 2014 Piotr Kubicius and Paweł Siemek with the help of Axel publishing company, made a game that fits this genre. It goes by name Altaria: Clash of Dimmensions. Graphic design and illustrations are done by Michał Bernat and Katarzyna Dziadkowiec. 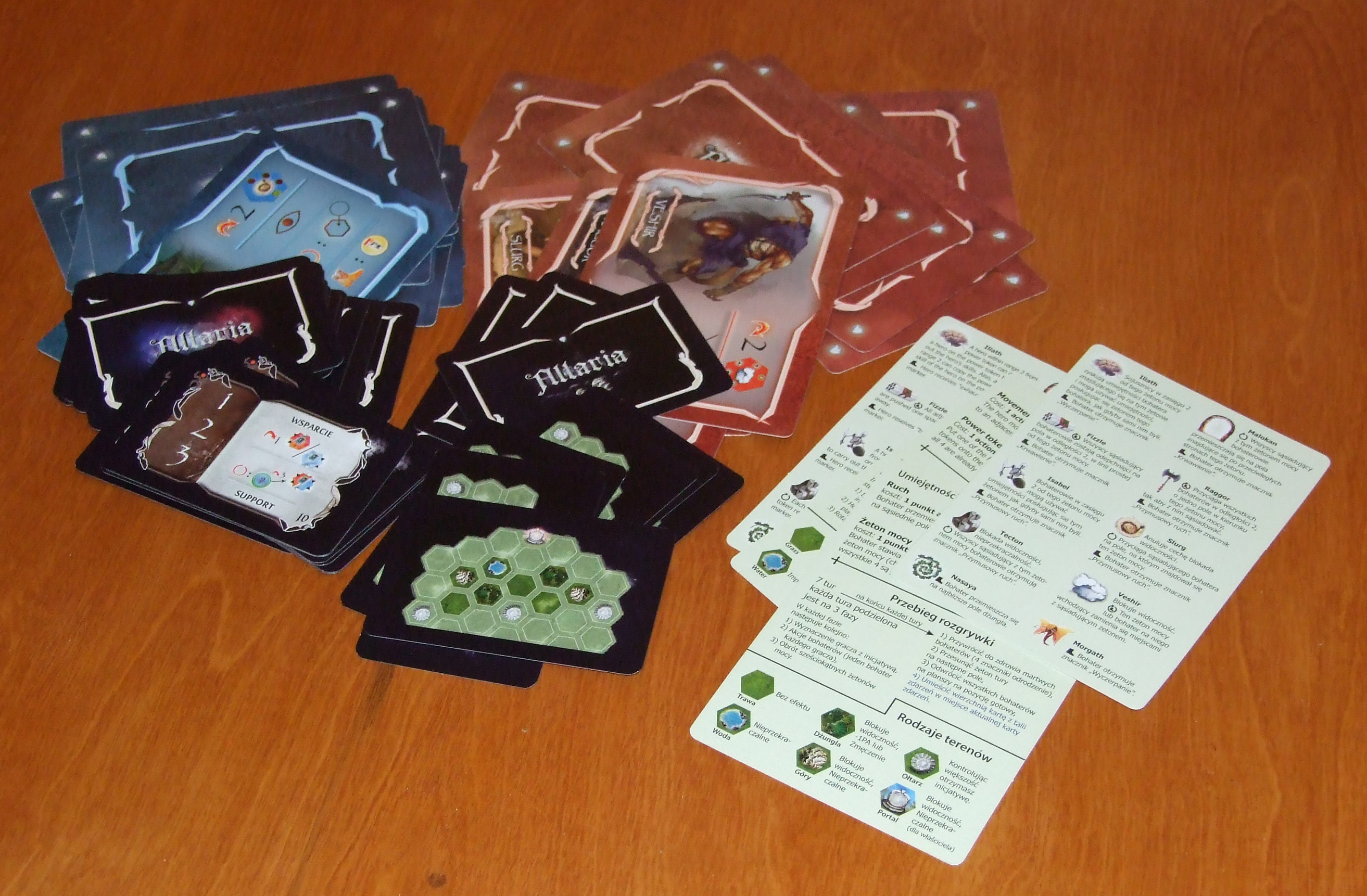 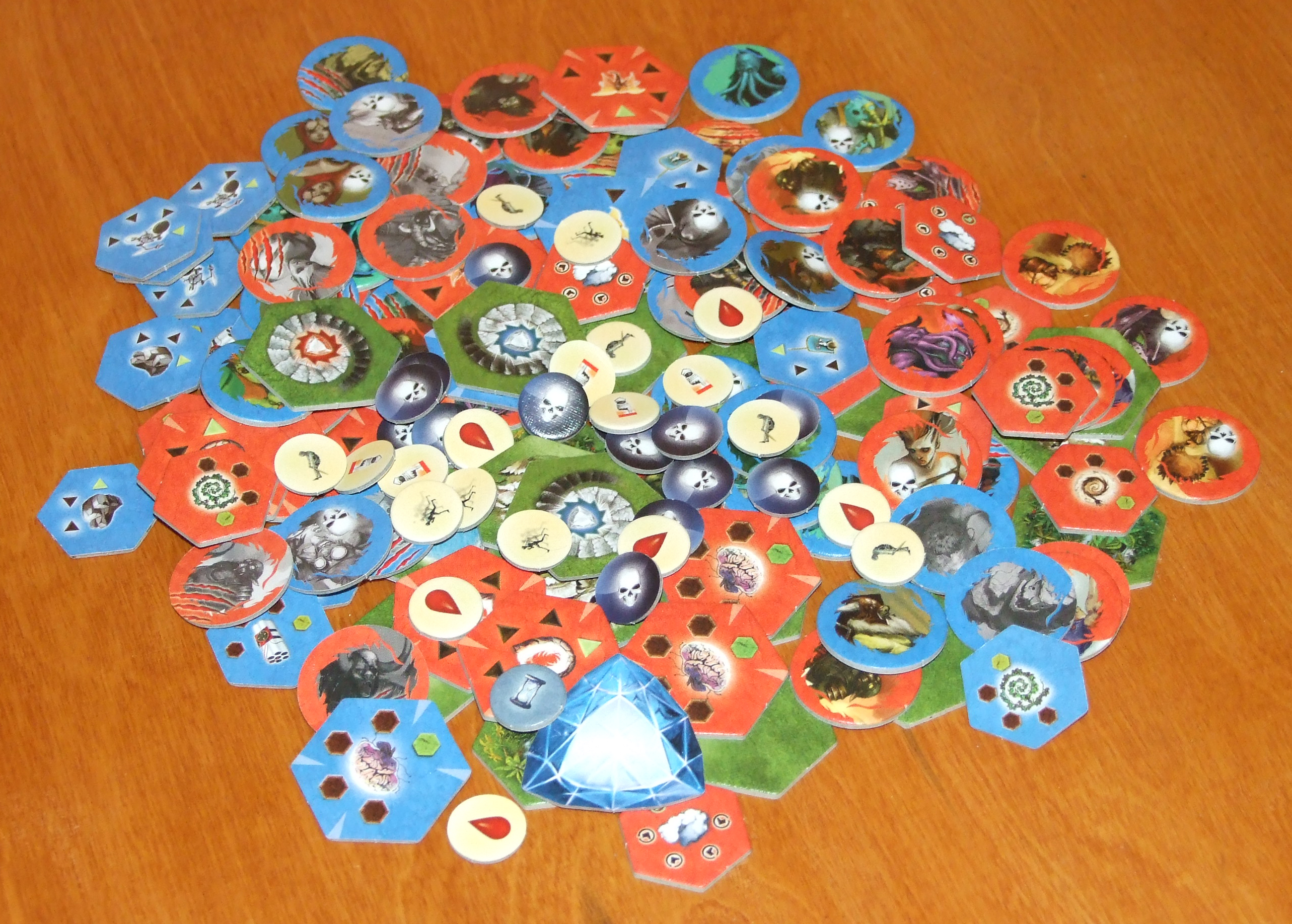 In a standard size box you get a small (28 cm x 28 cm) board on which will be your battlefield. It is a modular board covered in a hexagonal grid, where 16 hexes are removed to make place for terrain tokens. Next, you get hero sheets (10 for each player), there are 3 hero tokens for each card, which will represent our champion on the board (healthy, wounded, dead). Terrain token placement is determined by 9 terrain cards with specific token combinations, that you will use during game setup. Each turn will also be slightly modified by a deck of 20 event cards. Aside from that, in the box you will find tokens for each hero skill, condition, terrain, initiative and turn. Lastly, you will get aid cards, rulebook and 6 crystal markers. Components are good quality, with thick cards and properly punched tokens. 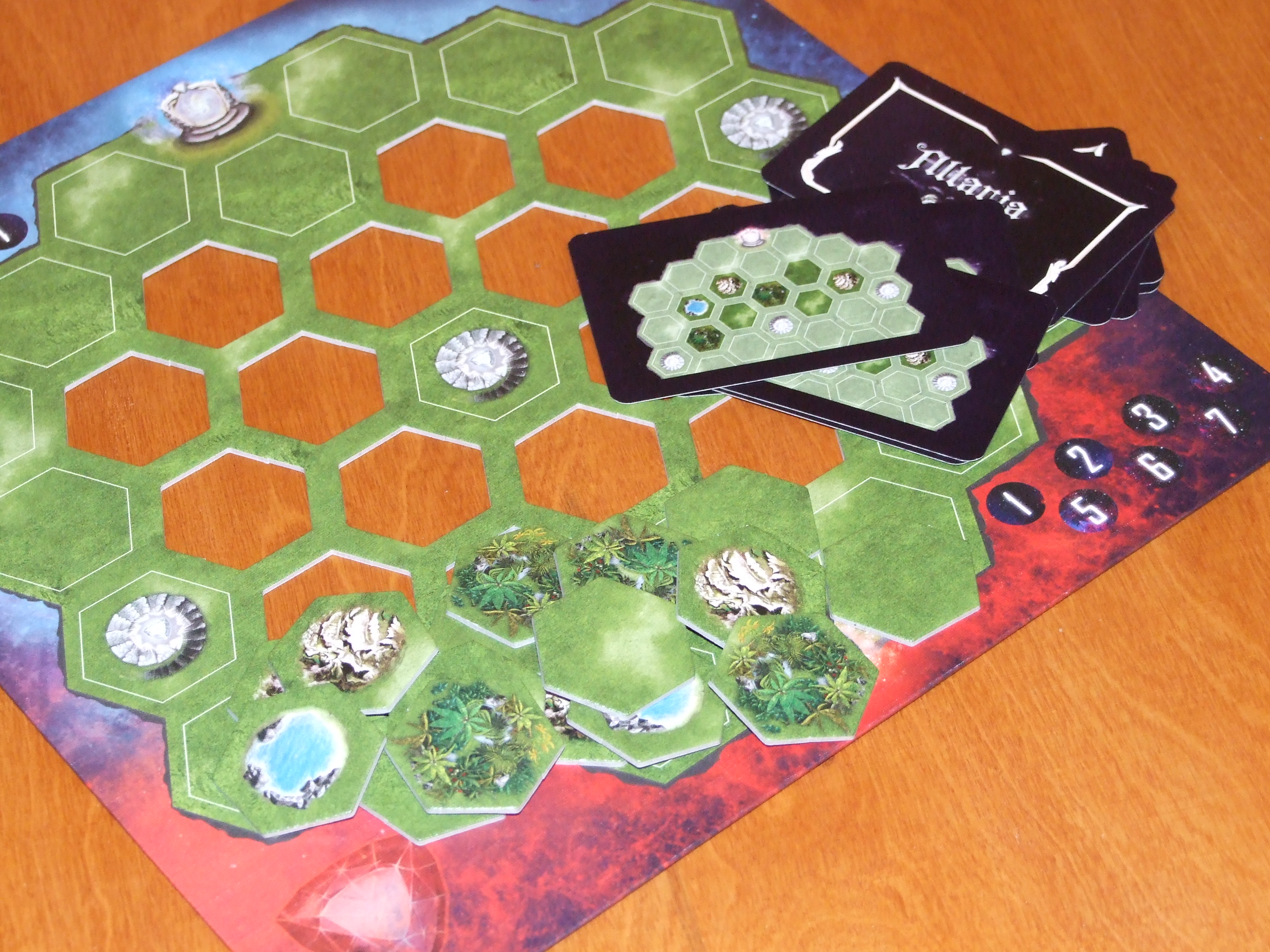 When I saw the illustrations for hero sheets, my first idea was that they in some way remind me of the first Summoner Wars faction decks. They seem rough, but with their own vibe. And it would be all fine and dandy, if not for lack of consistence with the rest of the graphic design. Unfortunately the pictograms, icons and overall graphic design feel like they’re from another game, maybe it’s only my impression, but in my opinion they do not go well together. The meaning of pictograms that should describe event cards and hero skills, is also not that clear to understand, unless both players will come to be familiar with their meaning thanks to aid cards. But to be clear, I’m adding to pros that the authors tried to make it language independent, and added the rulebook and aid cards in Polish and English language.

Altaria’s rulebook is of that kind you have to grit your teeth and bear it. After first few dry readings there will be many misunderstood rules. Terminology can be misguiding, lack of examples or examples without illustration are the next sins that this rulebook is committing. And all of this is only on 4 sheets of a horror that this rulebook is. If it wasn’t for my morbid curiosity about this game I would leave it on this stage, not bothering to get into the rules. But because I really wanted to experience this “moba on a board” I’ve contacted one of the authors, asking if he could help me and bring some more light to things that I couldn’t understand after I played few times. Well, he helped me and now I can explain this game in less than 5 minutes. For real, when you understand the rules, Altaria seams extremely easy to learn. 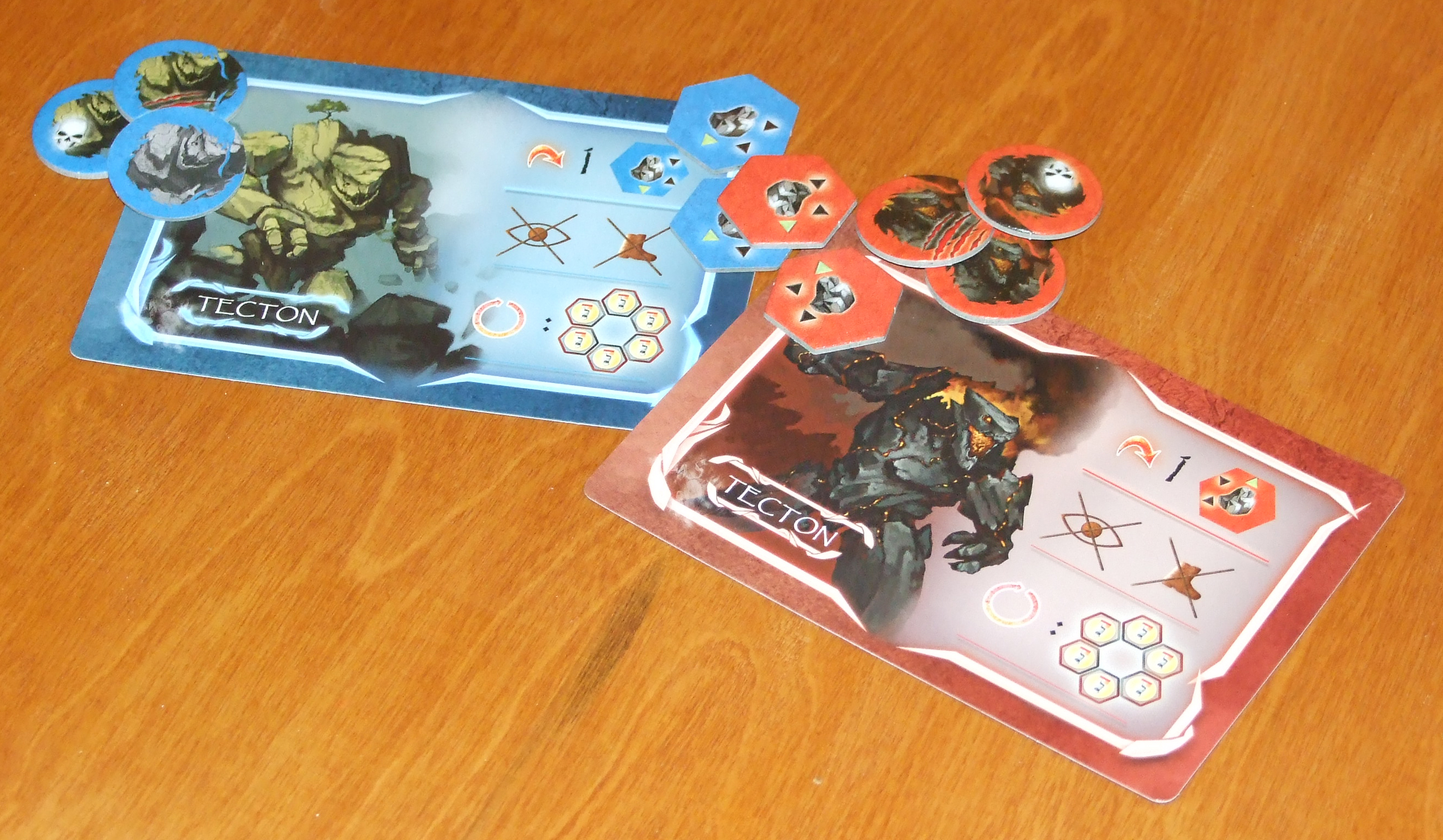 Each of the two players (blue and red) gets 3 heroes to control. To win a game you simply need to control  3 altars placed in the middle of board at the same time, or walk one of your heroes through the enemy portal. One game takes 7 turns, each turn has 3 phases, in each phase each player activates one of his yet unused hero. When you activate your hero, you can spend his action points, how many action points he will have depends on what event card is in play for current turn. You can spend action point on a few actions like hero skill, movement or attack. This isn’t a game of chances so when you decide to attack, chosen hero is simply wounded, if he gets  wounded a second time, he dies. Dead hero can still be activated, then his action points are spent only on rebirth markers. When he gathers four or more of those markers, he will come back to life in his next activation. In short, these are rules for Altaria. I must say that the actual gameplay resembles closely one of the older mods for League of Legends called Dominion, where one team struggles with another for control of strategic points of map. 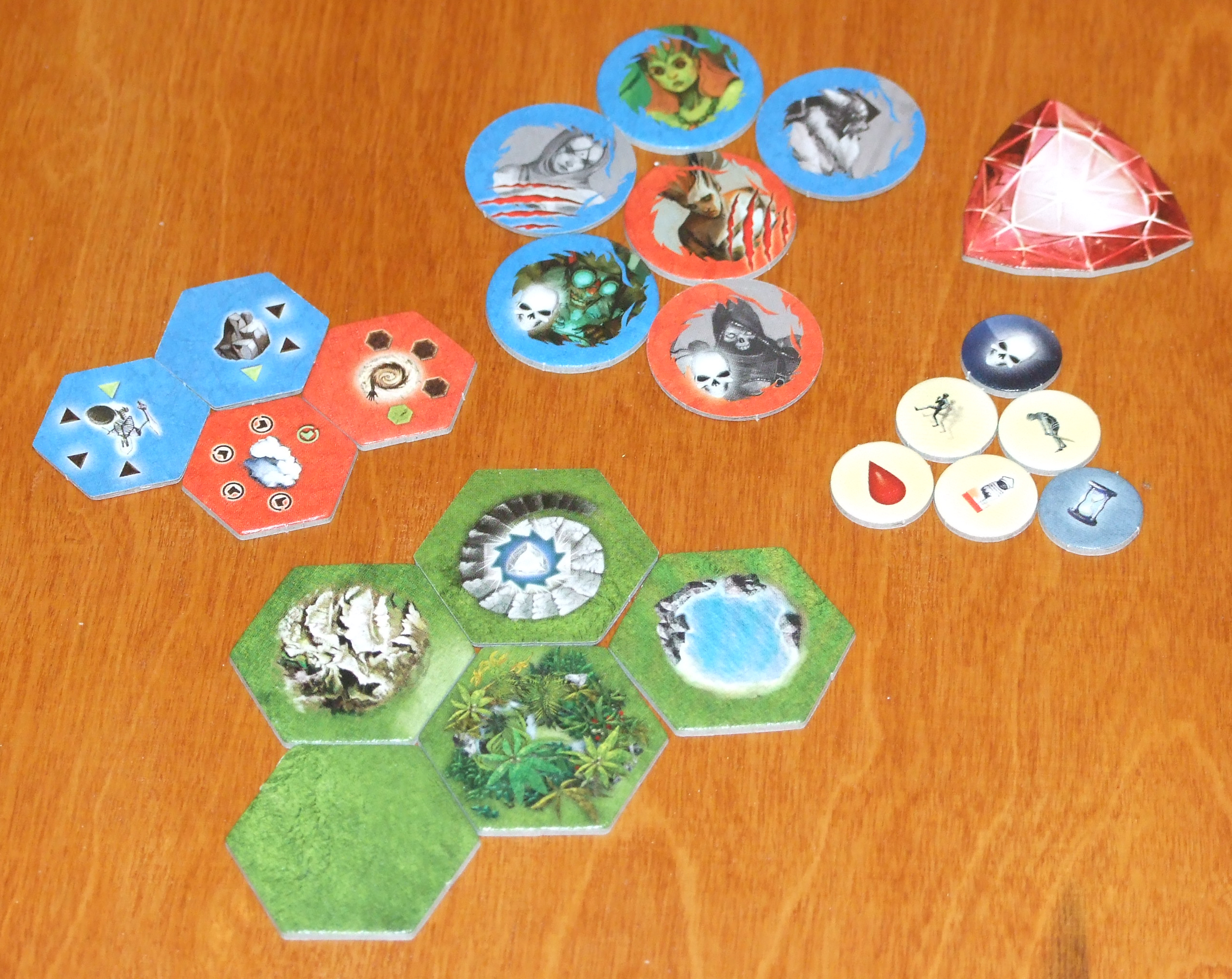 Hero skills usually cost one action point to place their power token on board, which will have his own ability used after specific requirement for this token activation. All power tokens have near their edges time markers, starting marker is always pointed toward blue player side of the board. After each phase you need to turn all power tokens clockwise by one time marker. If there is no time marker on side that we just turned it to, it means that this token should be taken from the board. The idea behind power tokens is great, I love how you can combo some of skills between your heroes to get advantage on the board. For instance in one of my last games, my hero was first pushed by activation of one token to jungle, in jungle waited for him a dynamite token which caused him bleeding and pushed my other heroes in a few directions. When you are able to efficiently combo your heroes’ skills you will completely destroy your opponent’s strategy. 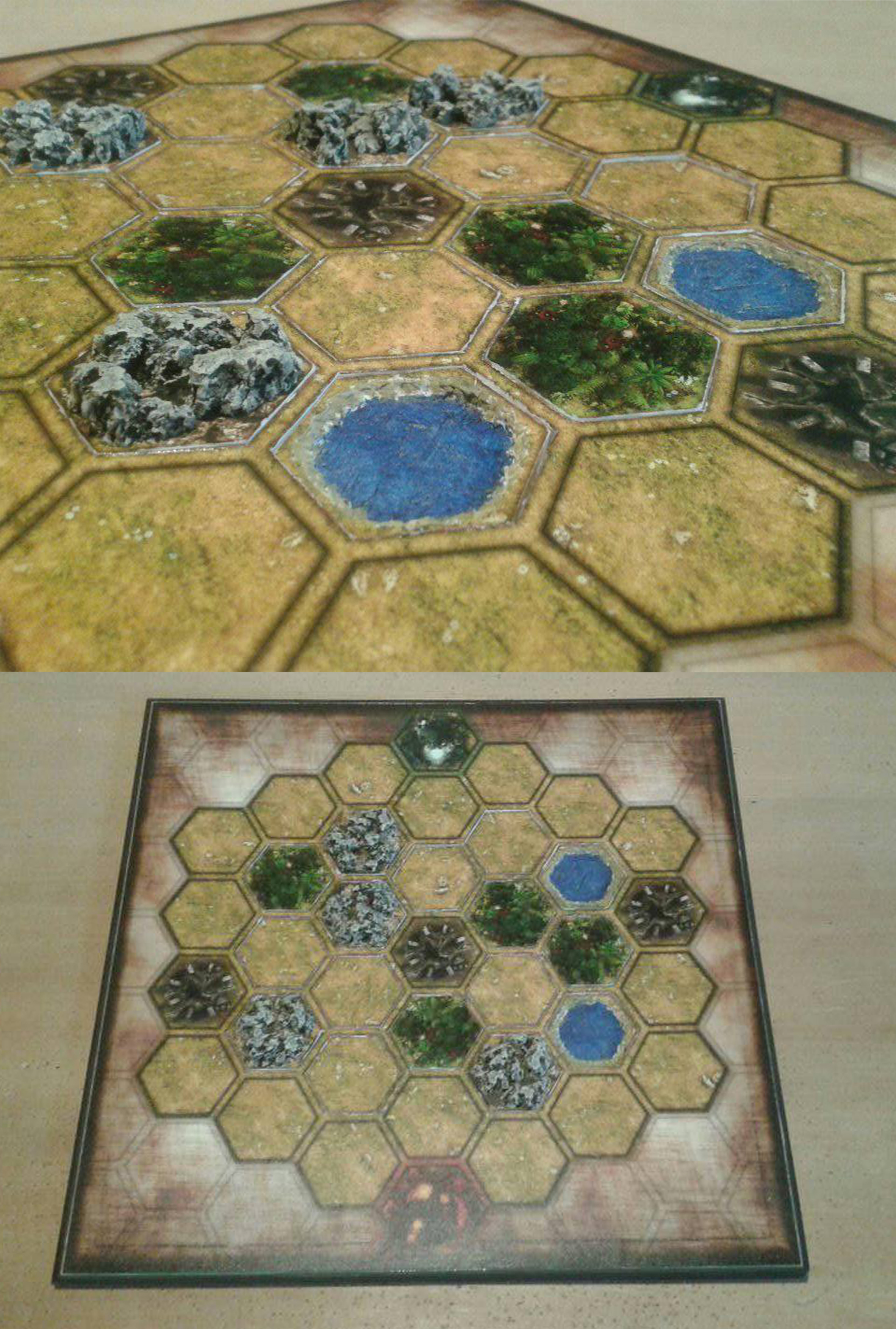 For me Altaria is a game of a big wasted potential. I had opportunity to see photos of prototype for this game, and it looks much better with 3d terrain tiles for modular part of the board. After I spoke with one of the authors, it turned out that the plan was for a bigger, clearer rulebook with illustrated examples. This game is really neat in how it brings moba games to board. Of course it is “moba” with pinch of salt, because it is only a duel not multiplayer, and it’s tabletop not online. But while playing you have that feeling you are looking at a minimap in one corner of your screen, where you can control your heroes and counter your enemy’s actions – so battle arena stands strong with this. Duels are satisfying, because of the lack of randomness in the game you are rewarded for strategic thinking ahead and punished for mistakes. I think that I can compare the level of strategy you can have here to somewhat resembling the one you have in chess. One match can take from 10 to 30 minutes, it depends on how good players know their heroes’ capability, so the game is fast.  Ignoring buggy rulebook Altaria can be described as easy to learn, hard to master. With variety of hero teams you can bring to the arena, the modular board and use of event cards, you’ve got something with loads of replayability. 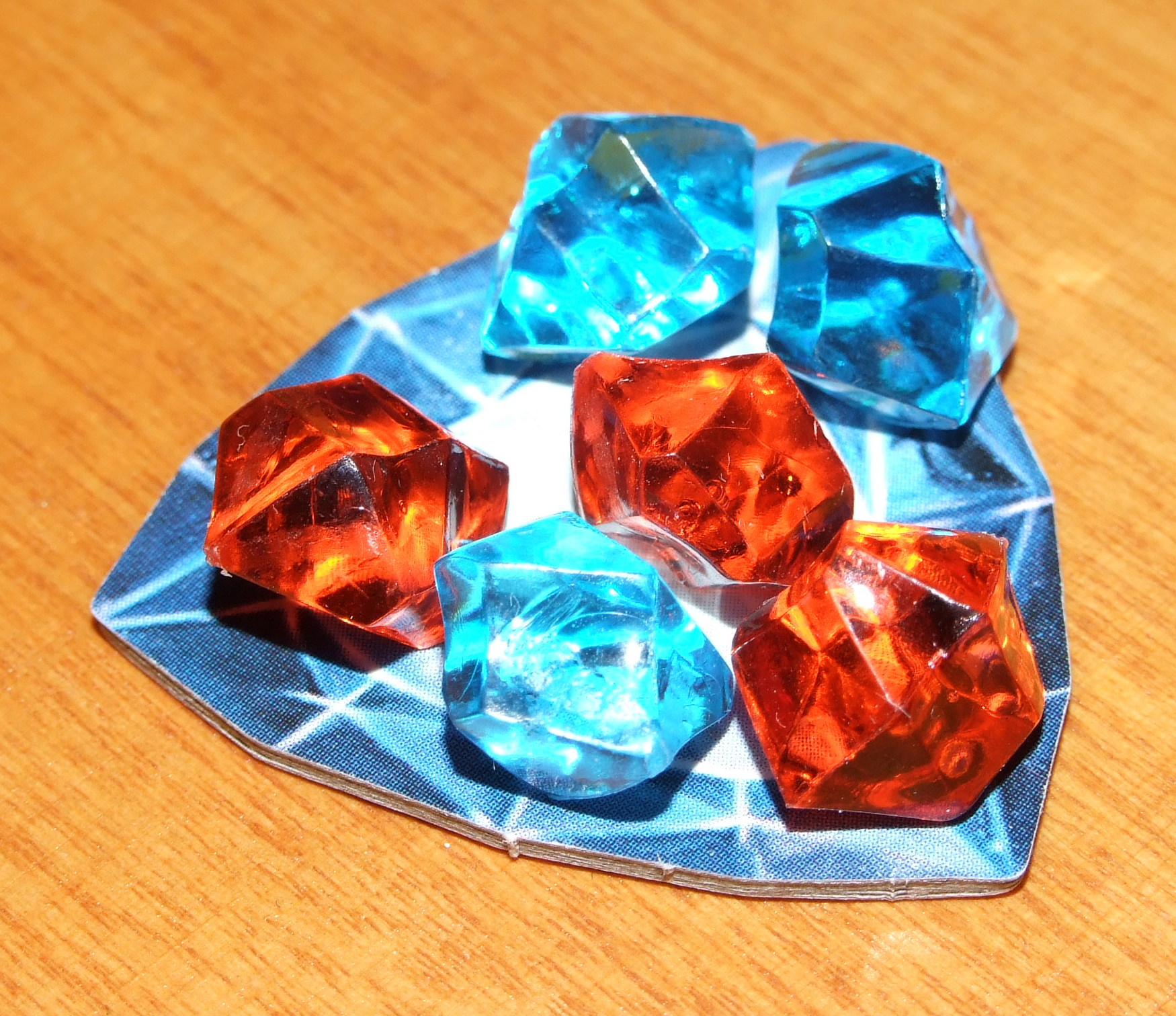 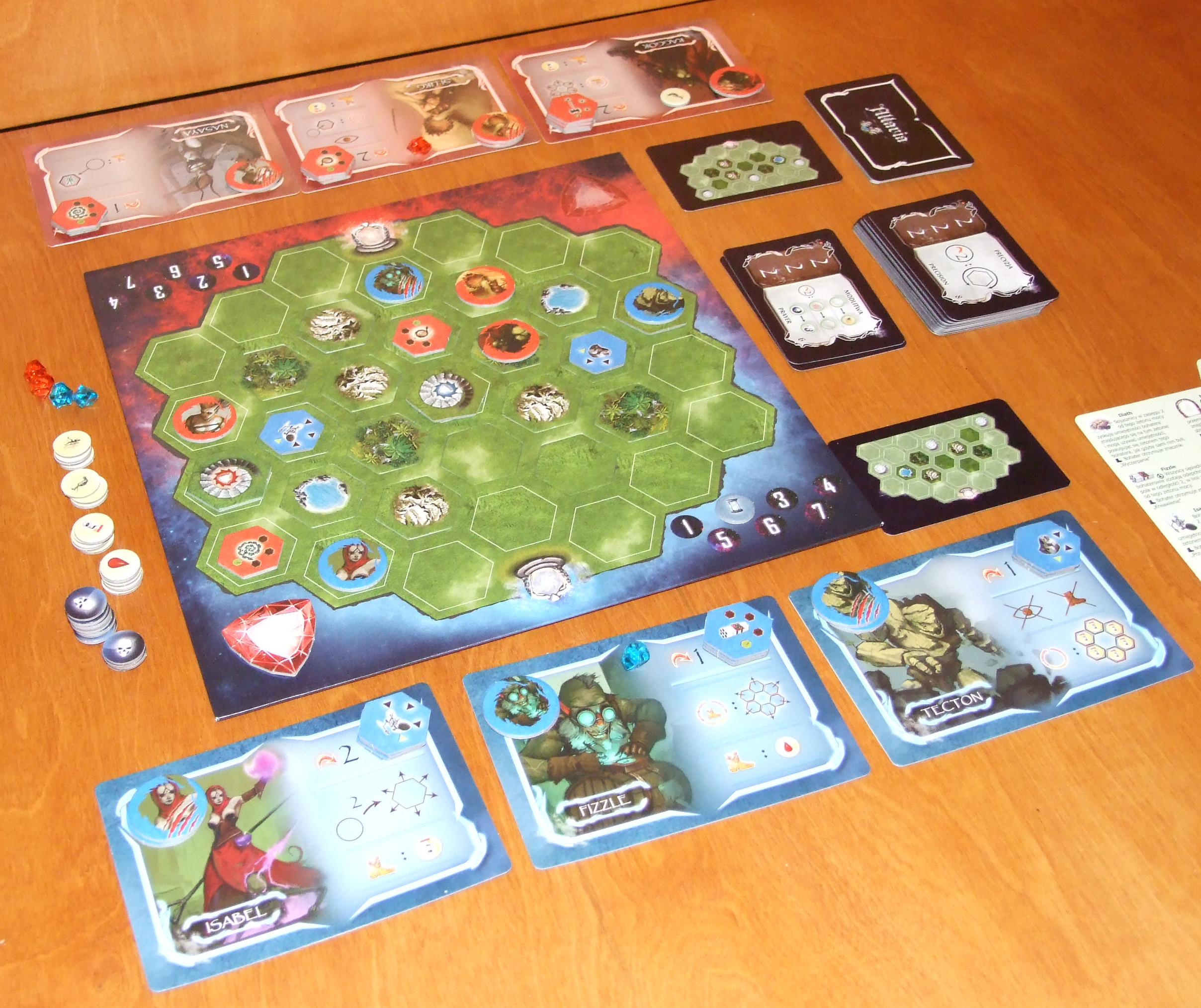 This is a perfect example on how without good promotion, low-budget edition of project and low engagement in the life of a game, a really good product can go unrecognized and ignored by community. There could easily be a line of expansion packs for it. Where players could from time to time buy a booster pack with a new hero, with sheet and tokens for red and blue side. Or land expansion with new terrain cards and tokens. There could be a running league of ranked tournaments for this game. On the spot I can think of rules modification that could completely get rid of any random factor, fully adapting it to tournament play. I can quite safely say that, if there were more time, money and willingness invested in this product, it could get to the level of successful games like Neuroshima Hex or Summoner Wars. Maybe even, after good presentation to Riot, whose game inspired Altaria, it could be produced with champions from League of Legends. On example of Mechs vs Minions you could expect that board game which mechanically is bringing their game to board would interest them enough to consider it for branding. For now I can only hope that the creators of this unpolished gem have plans for a second edition, where they can avoid mistakes made with first one. Or at least they will try to give it a new lease of life by publishing FAQ or new updated rulebook by themselves i.e on BGG, or by sharing new heroes pnp (print and play) version to test with community.

I am recommending this game to everyone who loves strategy games for two, where with lack of randomness, perfect strategy will give you victory, and any of your smallest mistakes will bring you to defeat. Alternatively, people who like moba games and want to try one in its tabletop version. But you need to have in mind, that you will have to scrape through a really bad rulebook.