You were In the Sector 5 lobby when it happened. The lights flickered for a moment before they went down entirely. When the red emergency lighting turned on you heard the first screams. A crowd of panicked voices in your headsets was drowned out by the announcement: “Red alert! All UAC personnel, code red safety violation in the dimensional gate research facility..”

That’s what you call a hard first day at work for 1 to 3 players controlling Union Aerospace Corporation security staff. And as for the one playing the hell-space invaders.. it’s up to him to keep them from living to retirement.

Licensed tabletop version of the id Software’s famous first person shooter, Doom was first published by Fantasy Flight Games in 2004, with the expansion following six months later. The game is available only in English, and unfortunately, only as a second-hand purchase. For now, as a new version of video game is available, release of new board game is planned for the 4th quarter of 2016. 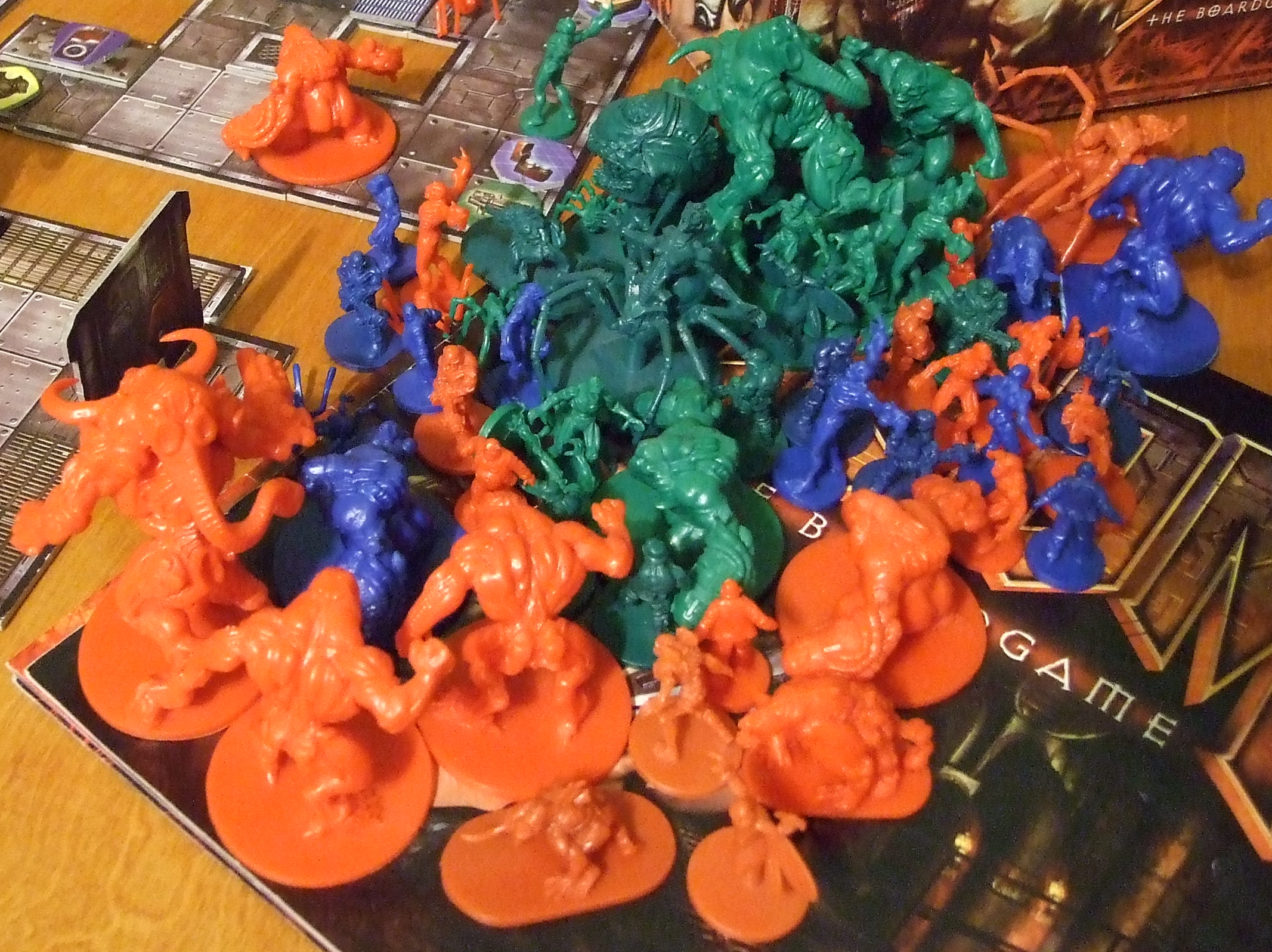 In the box, both the Basic version and the expansion set, we get an incredible number of monster figurines to chase and kill the marines with, six marines (three for each box), six range and damage dice, a pile of puzzle-like elements to assemble our maps with, tokens for health, ammo and various items, a deck of marine ability cards and a deck for invaders, weapon and monster reference tables, manual, and game scenarios. That’s a lot. And all those components are just great, I’d say – near indestructible. After 6 years of playing the game – which I got second-hand, mind you the game shows barely and signs of wear and tear. Sometimes I even get inspired to use up some paints on prettying up the figurines. As you can see by the number of still unpainted ones – the inspiration doesn’t come very often. 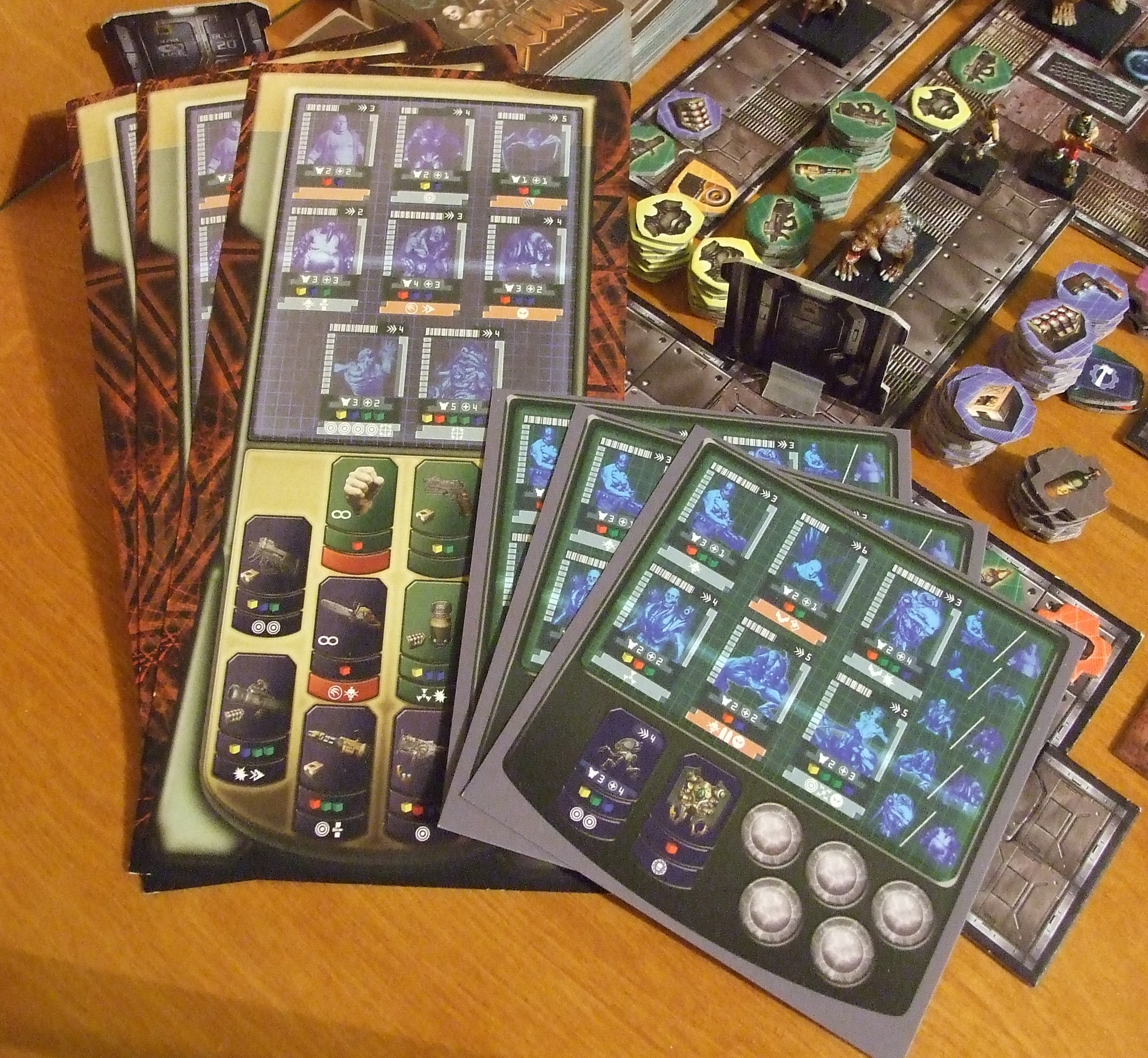 All those components add up to one of the simplest, most efficient dungeon crawlers – games where a group of players try to get their characters from A to B, leaving behind them a trail of blood and enemy corpses. They’re opposed by the Dungeon Master – a player controlling the whole menagerie. His goal is to slow the other players’ march into a crawl and ultimately to kill them before they can reach point B. Easy to learn and hard to master, Doom is a sci-fi horror version of that. 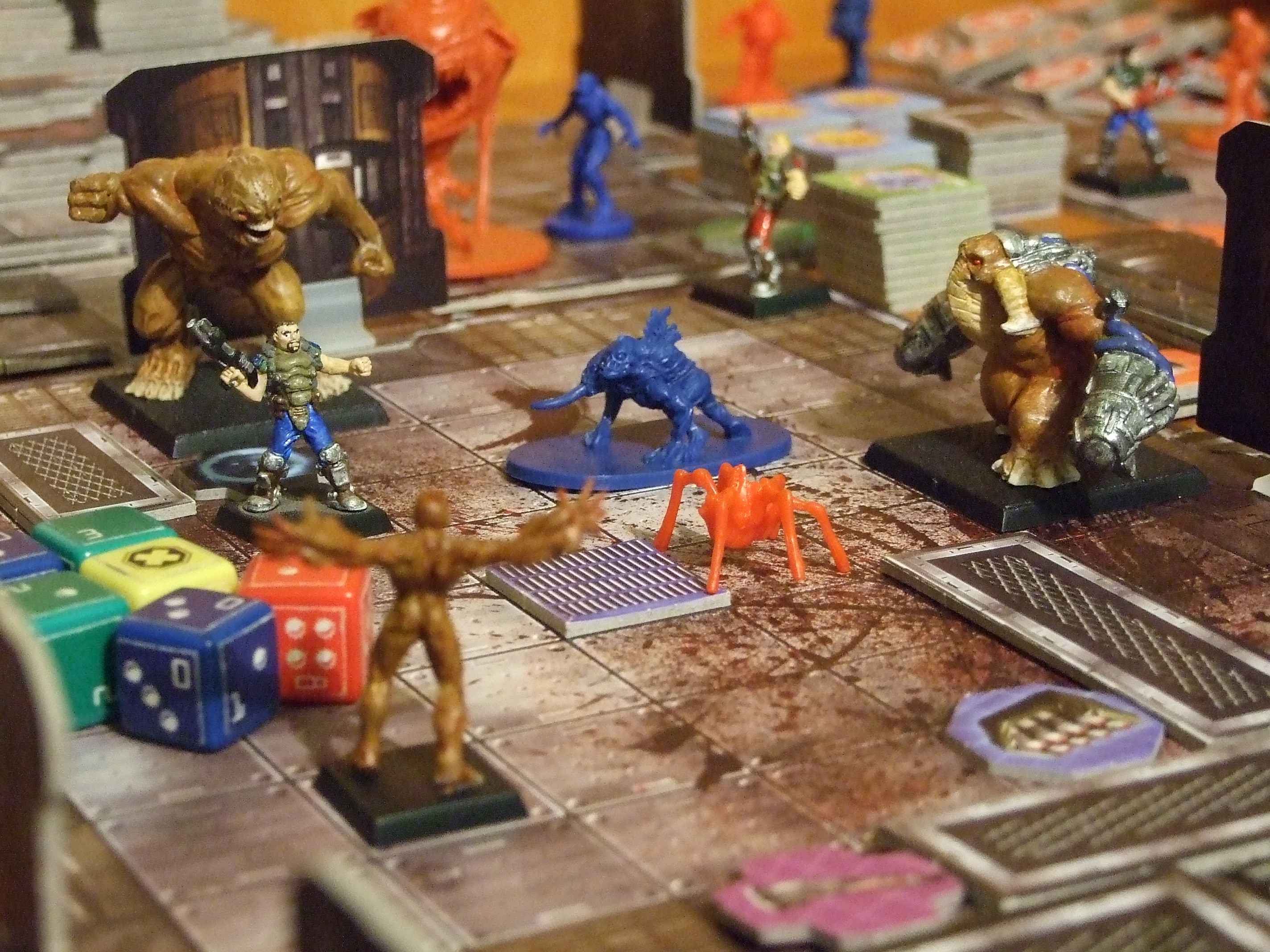 The gameplay is simple. Invaders player uses his cards to impede the marines and summon new monsters to attack them, while the marine players declare and execute one of four types of actions:
•    sprint – move twice as far, or move and pick up items and open doors;
•    unload – just shoot
•    advance – move and attack or the other way around
•    ready – move or attack and prepare an additional order 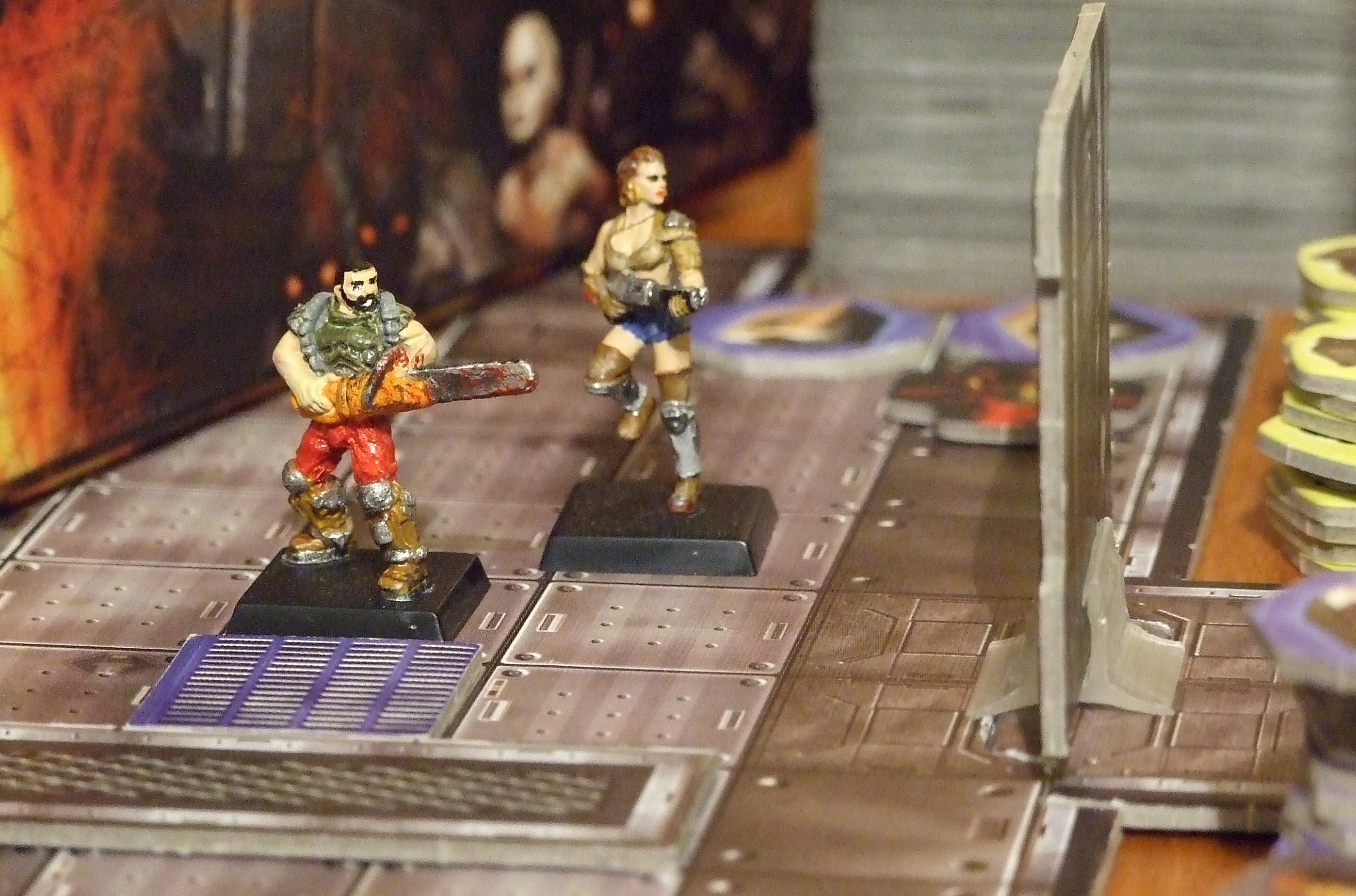 Preparation is a little different from the other board games. The invader player adds new elements as the scenario progresses. When the marines open a new door, he lays down the next room and fills it with pre-determined items and monsters. 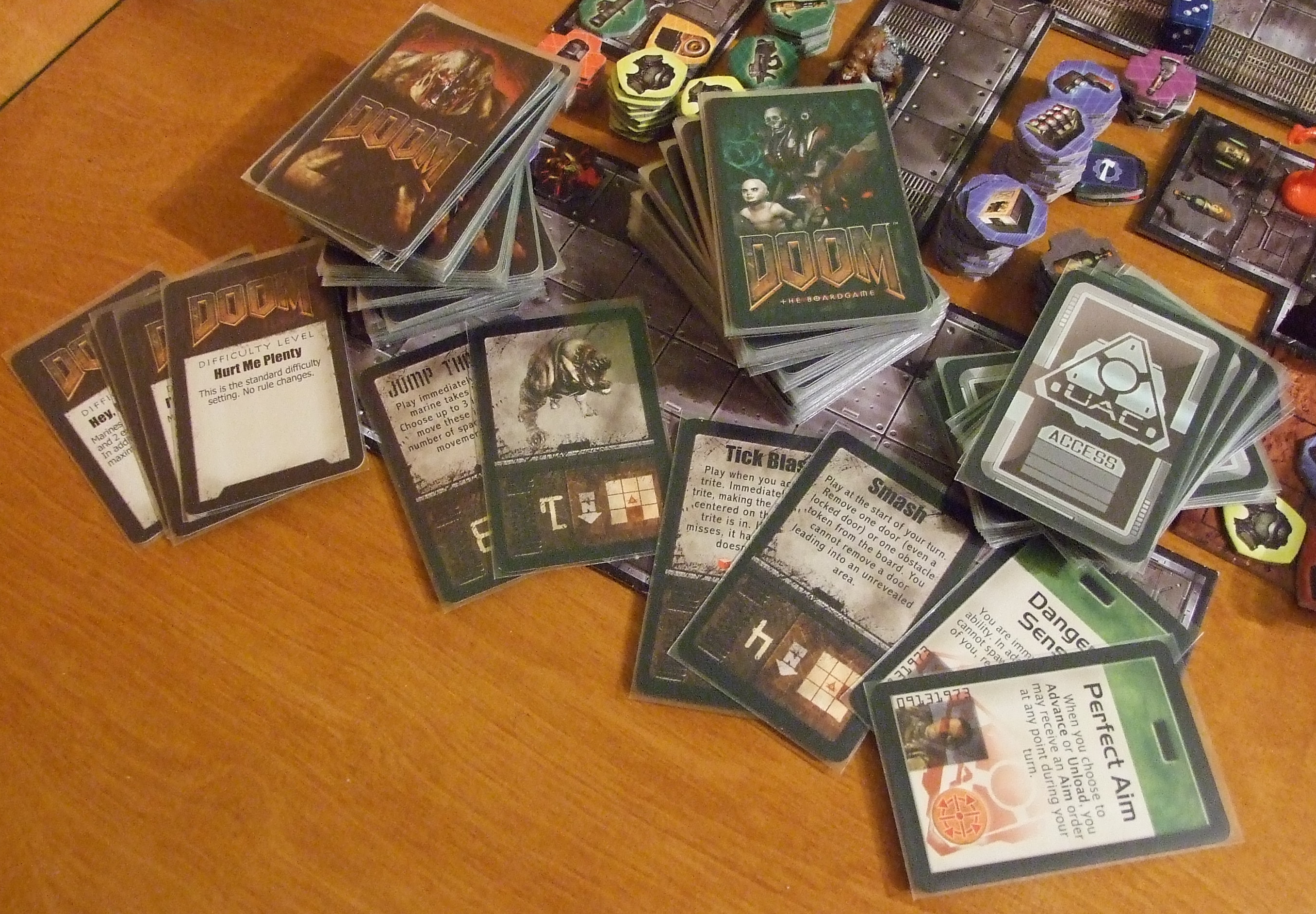 The game is merciless for the marine players – I know, because since I got it no one was able to finish all five scenarios from the base version. The expansion pack adds another five and I really hope to see them someday.. (I try not to read ahead the scenarios that I’ve not yet played) Some might think that having played a scenario once they won’t ever want to return to it. They’d be wrong. The game includes an experience system, allowing the players to better equip their characters for further adventures. 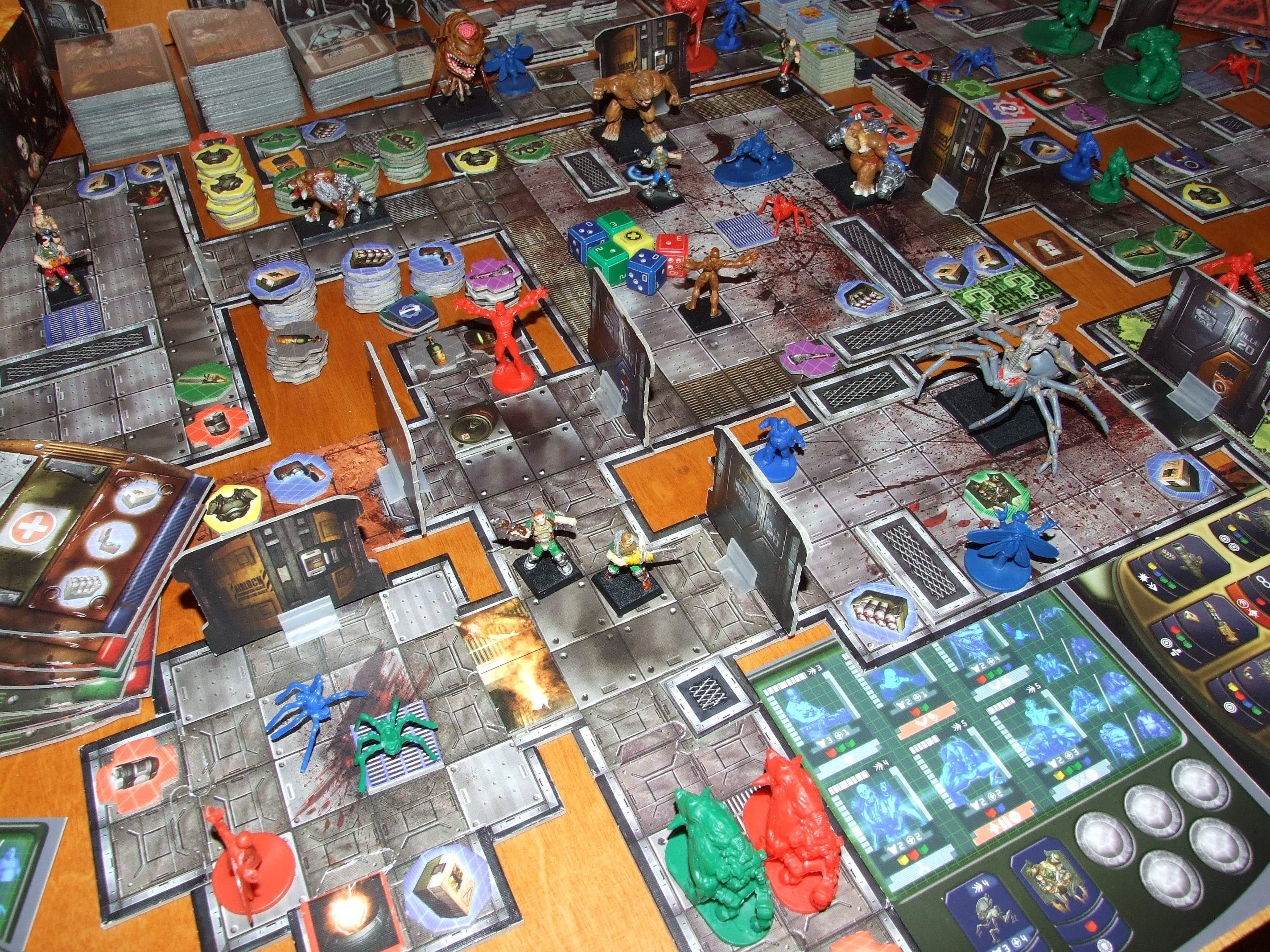 Sometimes players decide to make a new attempt at a level to try and get more from it. A small change to the rules we made (and suggest to others as well) is a “savegame” after each level. That way, even if they fail the next one they can restart as they were in the beginning. Replaying a scenario they already finished overwrites their old “save” even if they lose – which may set them back more than they wanted (sinister laughter). Replayability of the game comes from getting to know the maps and maximizing gains from them and from the rivalization between the invader and the marine players’ new tactics and tricks. 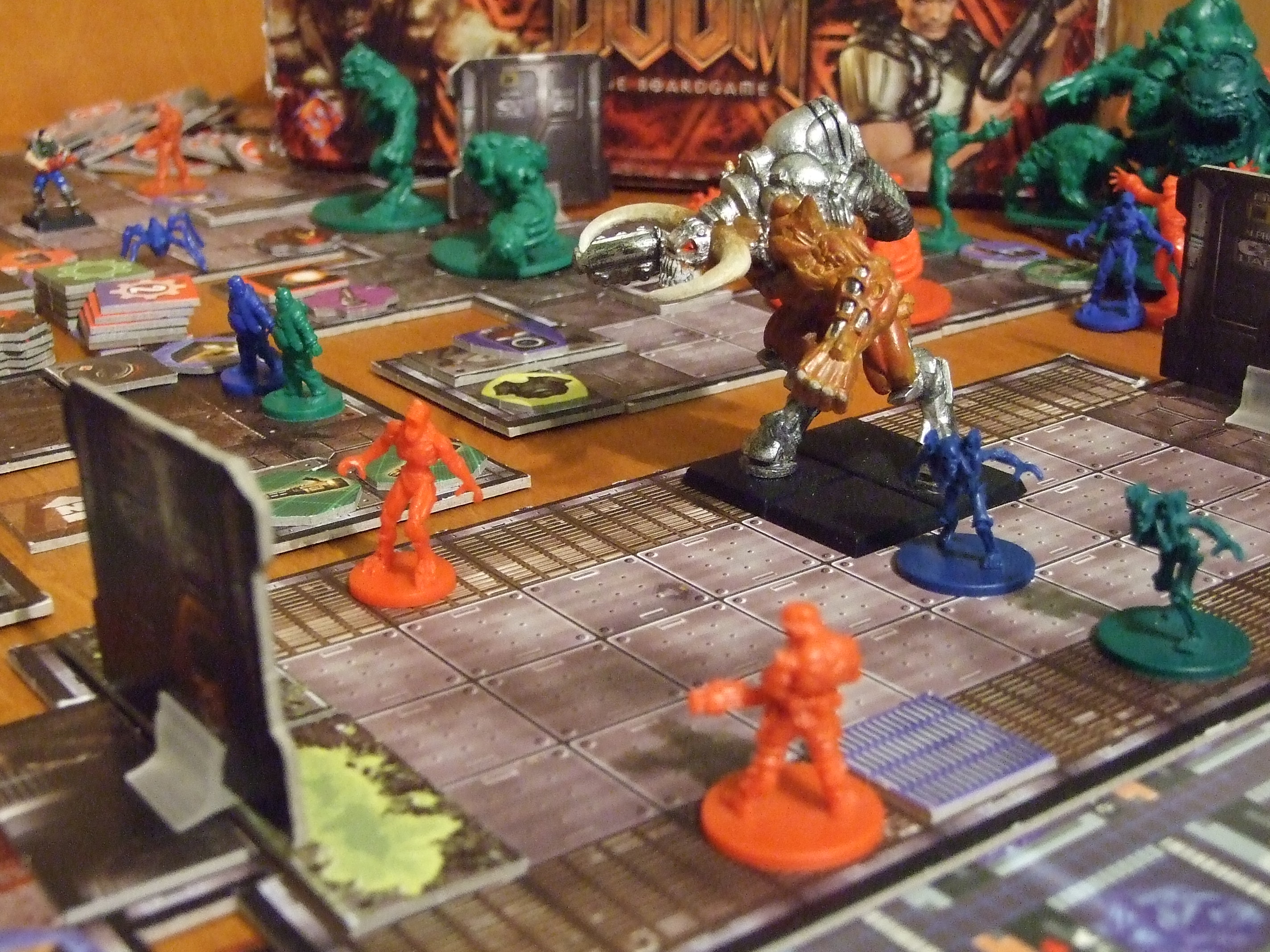 Doom is often described as a game for one sadist and three masochists. There’s no room here for compromise and no part of the players’ treck through the Martian research complex is to be taken lightly. The game is at its greatest when both sides give their best to win. If at any time you can do something to wreak havoc on the marines – or even slightly inconvenience them – you should. That way every time they manage to drag themselves through the red door leading to the next sector will feel truly rewarding and satisfying. They’ll be proud of themselves, and rightly so. This is also the reason for some negative opinions voiced about the game. Some claimed the game to be “unfairly hard for the marines”. Kevin Wilson, the games designer, responded to those accusations by saying that one can win any scenario from either side of the table. Most of the difficulty lies in understanding that the key to Doom is strategy rather than carnage. Jumping to the middle of the room and spraying it with all of your ammo is a straight path to tears as soon as you run out and the alien horde begins to grow. 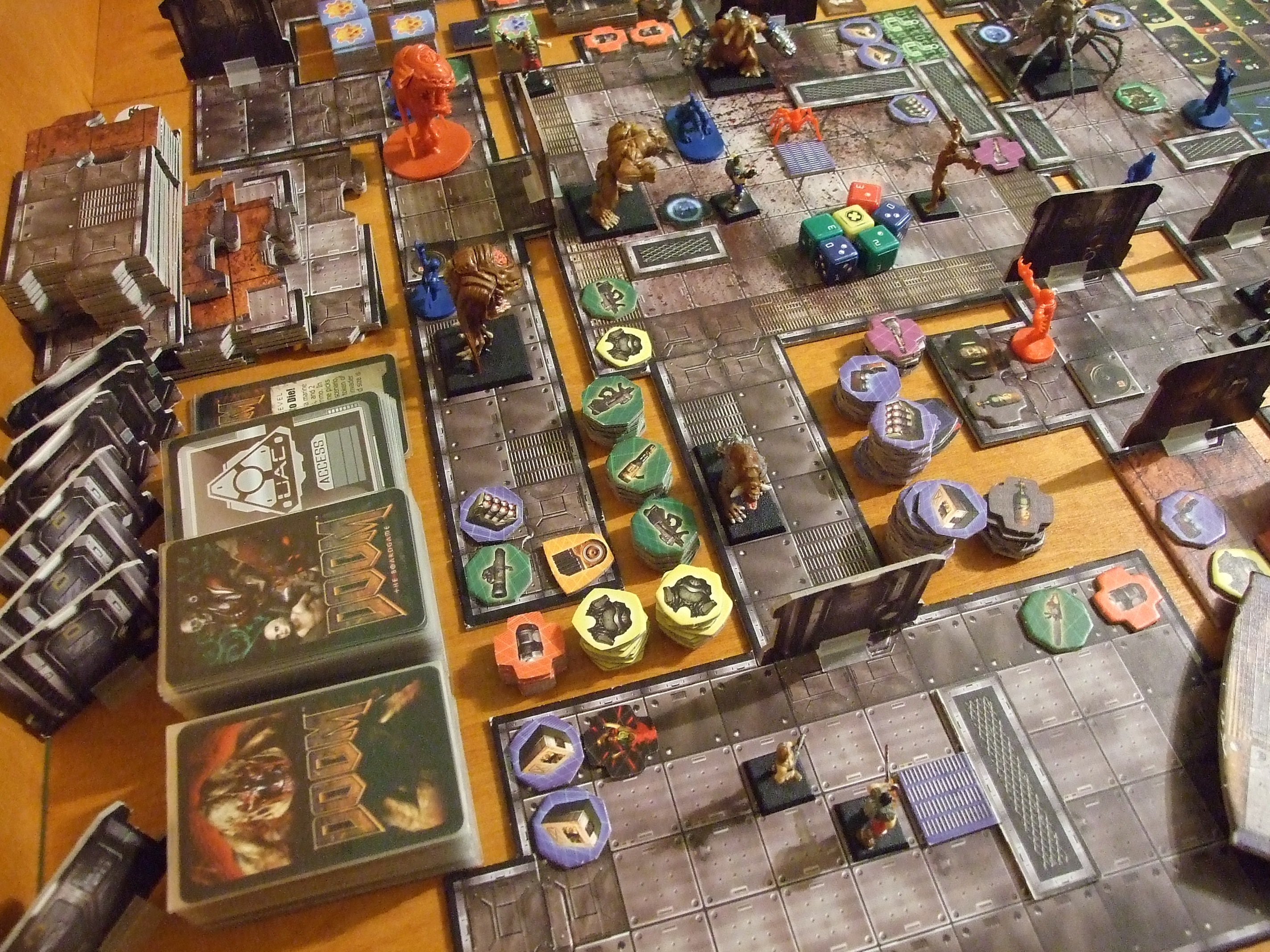 The game rewards tactical thinking and teamwork. Set up guards at the rear and in chokepoints, choose the best weapon for the job and share your ammo – that’s the true taste of this game. The game’s random elemnt are dice marked with symbols for range, damage, ammo or misfire. Selecting a weapon with the most appropriate set of sides (the dice differ in number of hits, damage, etc.) is a crucial part of the strategy. Of course, the fates can be cruel and at some times completely ruin your plan. But they can also allow you to succeed at the craziest stunts. Uncertainity adds extra flavor and, in my opinion, completely justifies the random factor. 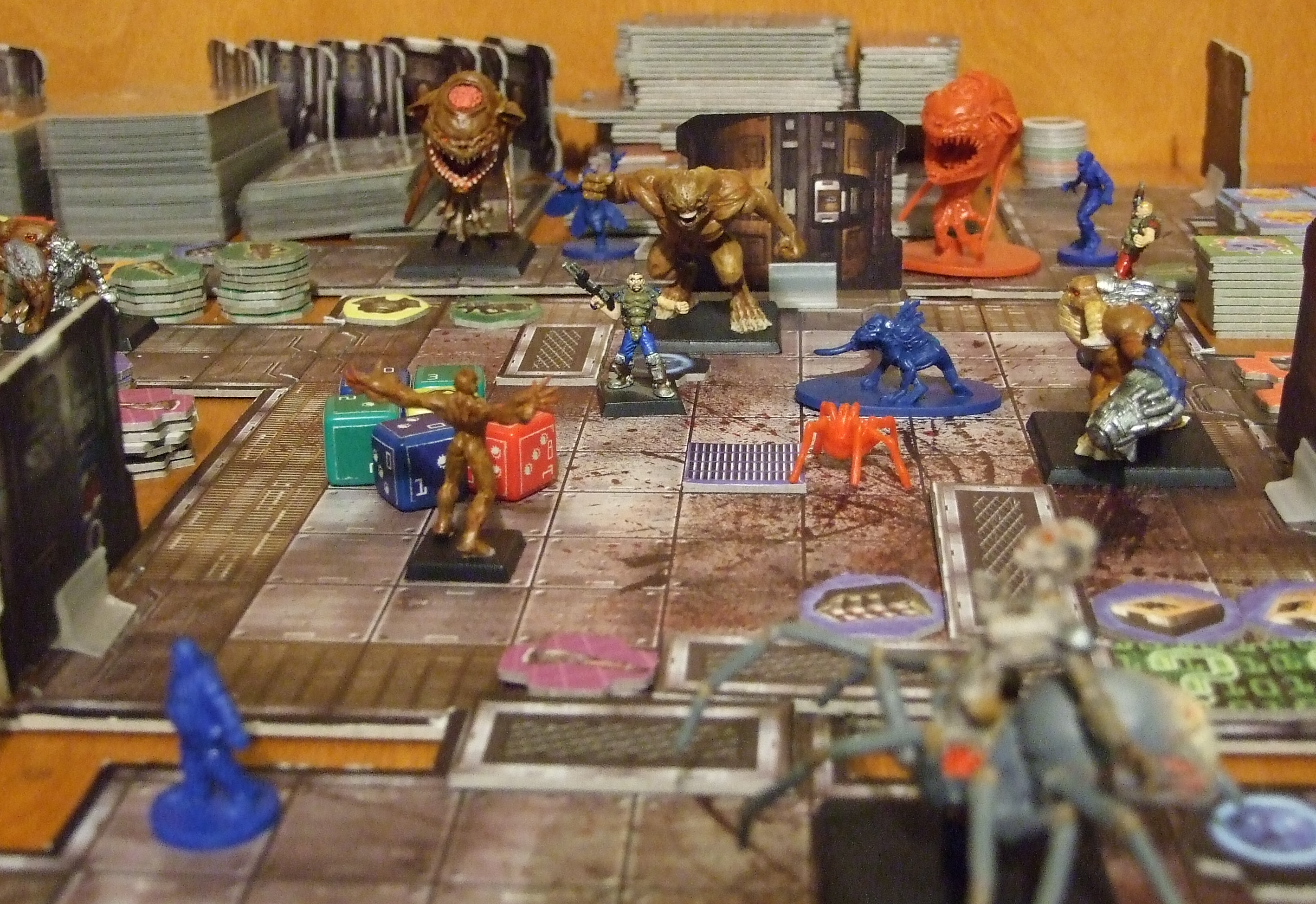 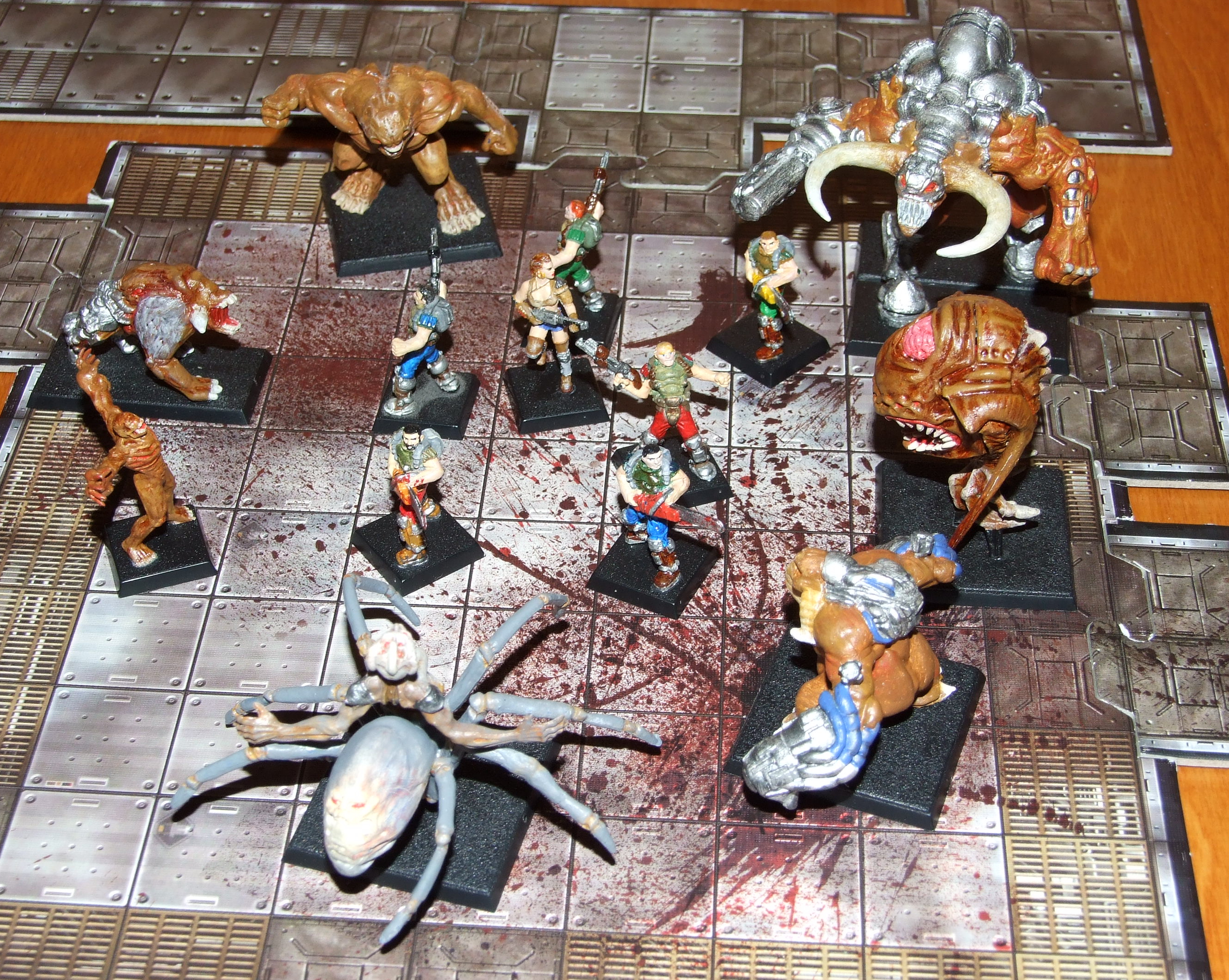 One game can last anywhere between ninety minutes and five hours. Add appropriate music, and get a group with the right attitude and it will surely be time well spent. True, you might feel down at times, mopping the floor with the marines but seeing that one last guy, battered and bloody, reach the end in spite of all you threw at him, makes for a really exciting experience. It’s a hard, aggressive, sometimes incredibly long game that can be a real pain in the butt – and I wouldn’t have it any other way.