Through this game you can become a Ninja, so wear a black assassin’s outfit, aim well and dodge quickly. There is no room for honor here.

San, Ni, Ichi is a very fresh game, as it was released in 2016 by Ironmark Games. At first it was available at Kickstarter, but it since was moved to regular sale on the manufacturer’s website. 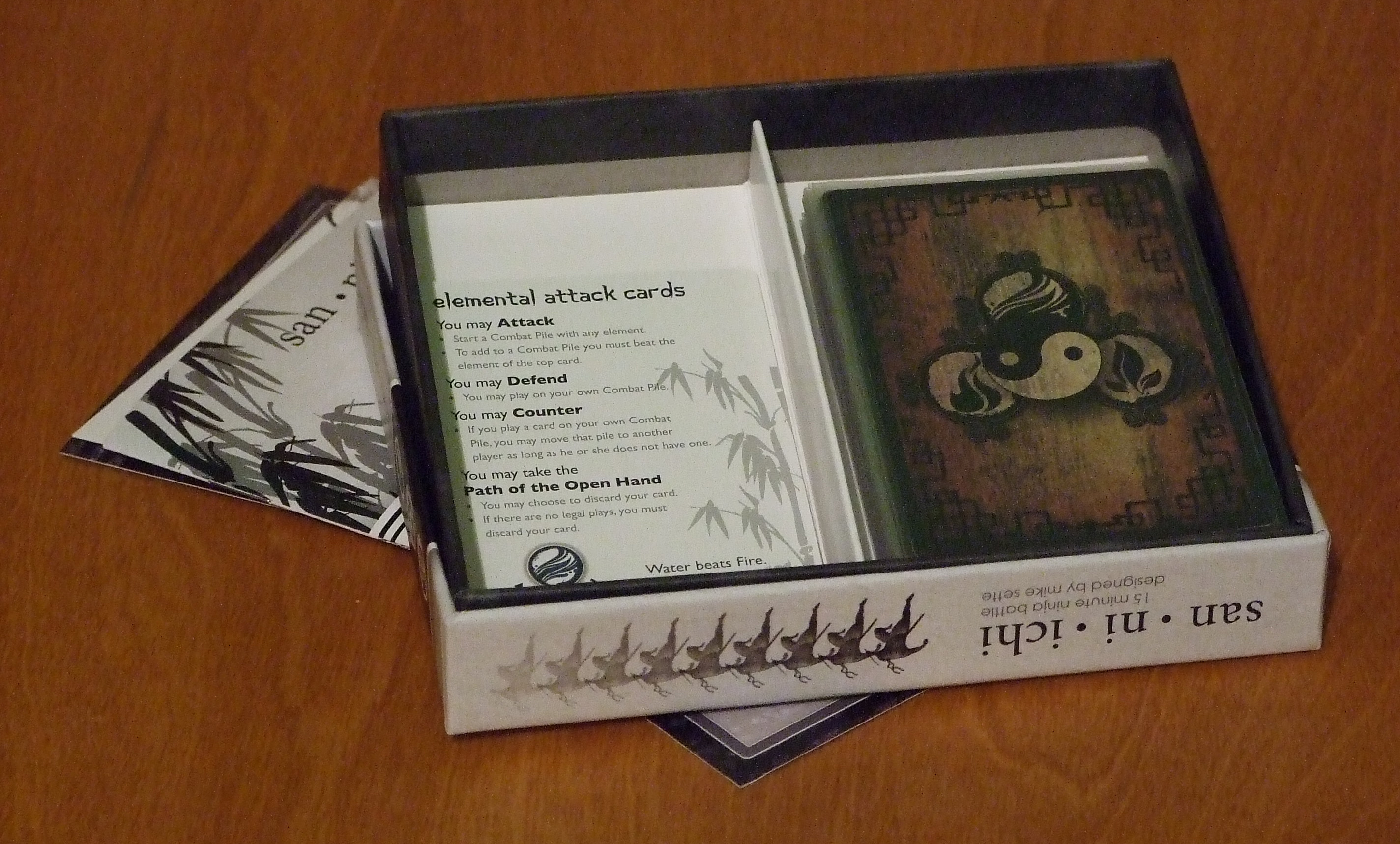 In a small, hard box we get a set of playing cards, small playmats, and reference cards with the turn order and a description of possible actions. The author and illustrator of this game is Mike Sette, the illustrations have a particular feeling about them, they work really well with the overall aesthetics. The cards are good quality, but it’s still better to put them in some protective sleeves – in my case the play count reached dozens of plays after only a few days. Additionally, we get a short rulebook and a piece of cardstock to separate the box into two parts. It may be a small thing, but it shows that the game was made by someone, who’s a gamer himself, and appreciates practical solutions – the division of the box works so the deck without protective sleeves fits on one side, and you can put cards with sleeves on the other. Same thing with the layout of graphics and information on the cards themselves – everythings readable and logical, there is nothing that’s unnecessary or rarely used. 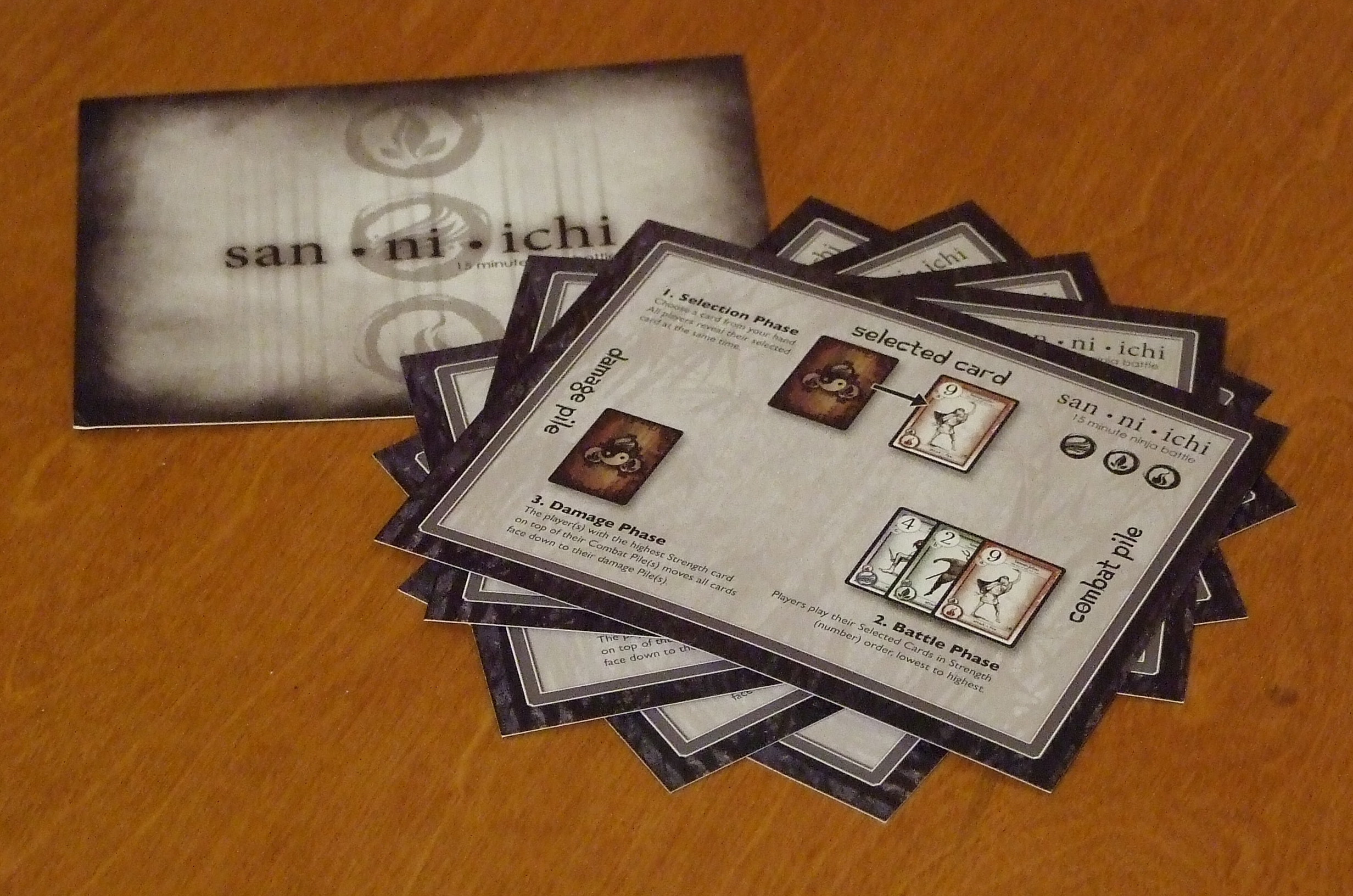 Battles can be fought in a group of 3 to 6 players, one game may take approximately 15 minutes, thougth in reality such is a length of the first couple of games, after which the duration shortens into about five to ten minutes. The course of the game is a no-brainer, firstly all players pick one card from their hand of seven , then all at once reveal it and play it on the “combat pile” of a chosen opponent – they follow the initiative order printed on cards. We can play elemental attack or special cards. The element cards utilize a “rock-paper-scissors” mechanic: fire cards can be played on top of a pile with a wood card, wood on water, and water on fire. When all the card have been played on the respective combat piles, the player with the highest number on top of his combat pile places all cards of that pile to his “damage pile”. Special cards have a description of how they work and how you can play them on piles. The game ends after the seventh turn, all players count the amount of wounds they took over the course of the game (initiative on elemental card is also damage that player will take in the end). The ninja who is the least wounded is the winner. 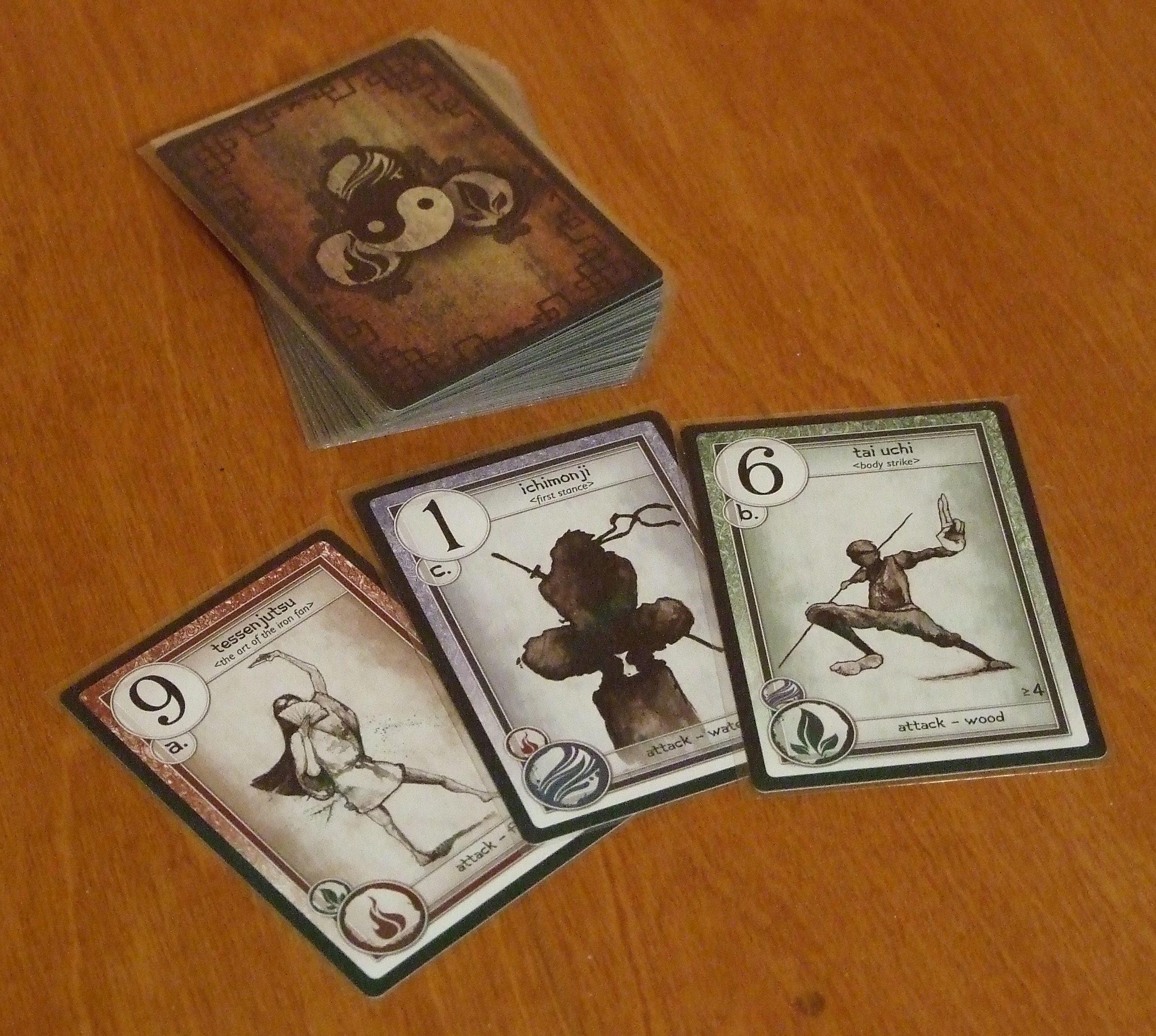 The game is extremely simple and fast, but still provides lots of replayability. After virtually every game someone suggested to play another one. At the end of the night it turned out that the filler game took over the entire playtime. The course of the round engages the players to follow what’s happening on the table and systematically analyze what to do with their cards when their turn rolls around, so there is nearly no downtime. Easy to learn, hard to master – seems like a key idea here to me.  Though at first the game seems random, in fact it’s not so. For one thing, during preparation, known sets of cards are shuffled along with some special cards – depending on the number of players – these cards are also shown to  everyone before shuffling. When we get our hand of seven random cards, we can attempt to predict what cards other players have, on the basis of our own. The gameplay forces us to analyze probable card patterns, read players’ behaviors which can suggest the cards they play, and bluff, so our own card causes possibly most damage to others. Additionally we can attempt to memorize what cards were already played, which can also help determine who has what on his hand. There were moments, when I had an impression of being in a battle of poker-players sitting around a table in the Wild West. Sometimes there were conversations across the table, deals of the kind “I’ll attack this guy if you attack that guy”, and of course breaking of these deals occurred as well. After all, who would expect an assassin to be true to his word. Subtle suggestions to attack a particular person and stuff like that are some of the most pleasant aspects of this “take that!” style of games.

The only thing I struggled with, and consider a flaw of San, Ni, Ichi is the rulebook. Reading it made me think that the creator considered the game to be simple enough to cut corners describing the gameplay. As a result, having read the rulebook the gameplay is unclear. Luckily, on maufacturer’s website there is an approximately 2 minute video explaining the rules. In my opinion the rulebook should be rewritten. 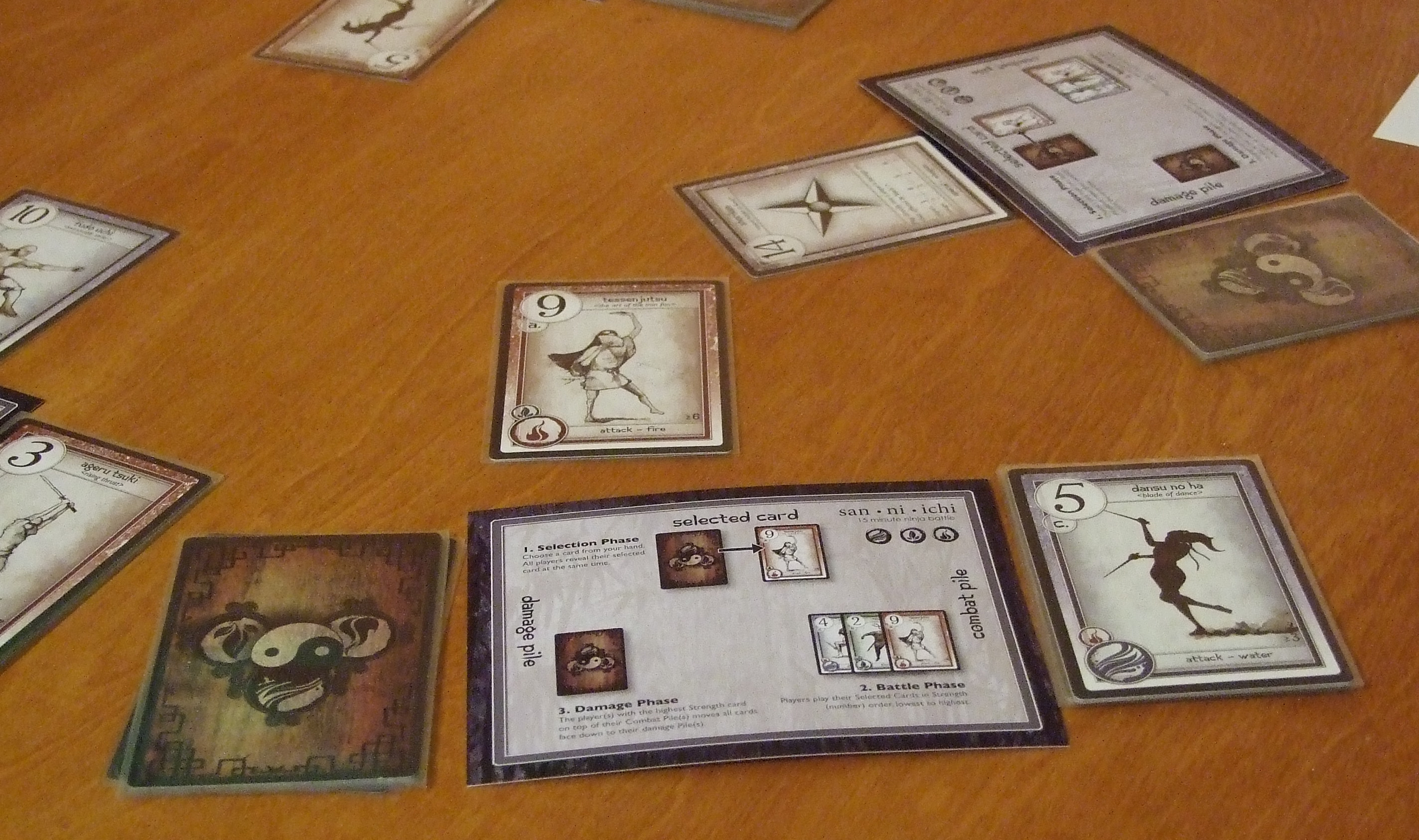 With the exception of the mentioned rulebook concerns, this title is incredible. I completely didn’t expect how big an impression it would make on me. A game based completely on negative interaction, simple, seemingly a no-brainer, yet revealing with each play the potential of undiscovered tactics leading to victory. I played it through with over twenty different people and not one of them complained about it. For me it’s a must-have, good to always have it around, as we never know when we’ll have a half hour to spare for a few ninja battles.